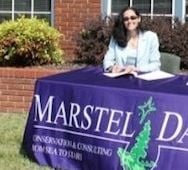 Marstel-Day CEO Rebecca Rubin outside one of her company's new homes. 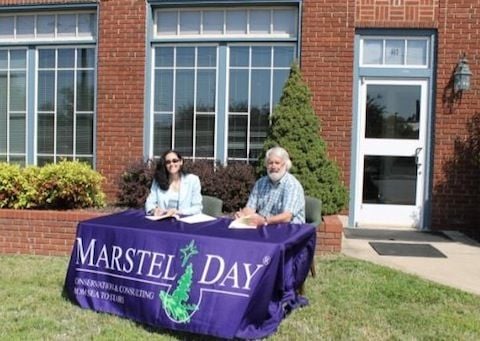 Marstel-Day CEO Rebecca Rubin and landlord Westley St Claire of Woodmere Properties sign leases outside one of the new Marstel-Day offices in Fredericksburg.

A fast-growing environmental consulting firm will soon have a new headquarters in downtown Fredericksburg.

Marstel-Day LLC in June plans to move its principal office to a pair of nearby buildings at the intersection of Wolfe and Prince Edward streets.

The firm last week leased a total of about 15,000 square feet at 417 Wolfe St. and 513 Prince Edward St., both of which are owned by Woodmere Associates, Ltd. About two-thirds of the space will be in the Prince Edward building.

The company will relocate there from its current roughly 8,900-square-foot headquarters in the George Washington Executive Center on Princess Anne Street. Marstel-Day employs about 60 people in Fredericksburg and another 60 at offices in Alexandria, California, Colorado, Texas and Mississippi.

Marstel-Day CEO Rebecca Rubin said the decision to move wasn’t easy, as the firm likes its current space. One of the primary benefits of the new, larger space, Rubin said, is its close proximity to the downtown train station, which will allow employees to avoid Interstate 95 when meeting with clients.

Other environmental-friendly attributes of the new space will include eco-friendly carpet and zero-VOC paint, bike racks and a dedicated outdoor space for plants and trees. The space also has an extensive IT infrastructure already in place, Rubin said.

Marstel-Day worked with Johnson Realty Advisors on the lease.

I WEAR hearing aids. Most people are surprised to learn this. They are not only surprised I wear them—and have for more than 15 years—but that…

Rappahannock Electric Cooperative promoted Kevin Pories to director of operations and construction at its Culpeper office. Pories began his ca…

What Biden’s free college plan could mean for you

Take a closer look at Biden's American Families Plan and how it could affect your finances. Plus, check out more money tips from experts at NerdWallet, Forbes and the Motley-Fool.

Tax Benefits Of Caring For An Aging Relative

Caring for an elderly relative can be rewarding, but incredibly difficult – as well as expensive. However, it may be possible to recoup some of the costs through income tax savings.

There are two general approaches to tax savings on elder care costs – taking medical deductions that can be itemized and claiming a dependent care credit that can be subtracted directly from the taxes you owe.

First, you must determine if your elderly relative qualifies as a dependent. Full details are listed in IRS Publication 501, "Dependents, Standard Deduction, and Filing Information," but the primary criteria are that they must be a relative, you must be providing over half of their support, and their gross 2020 income must be less than $4,300.

The definition of relatives includes stepparents and in-laws. They do not...

Tax Benefits Of Having Dependents

Marstel-Day CEO Rebecca Rubin outside one of her company's new homes.

Marstel-Day CEO Rebecca Rubin and landlord Westley St Claire of Woodmere Properties sign leases outside one of the new Marstel-Day offices in Fredericksburg.