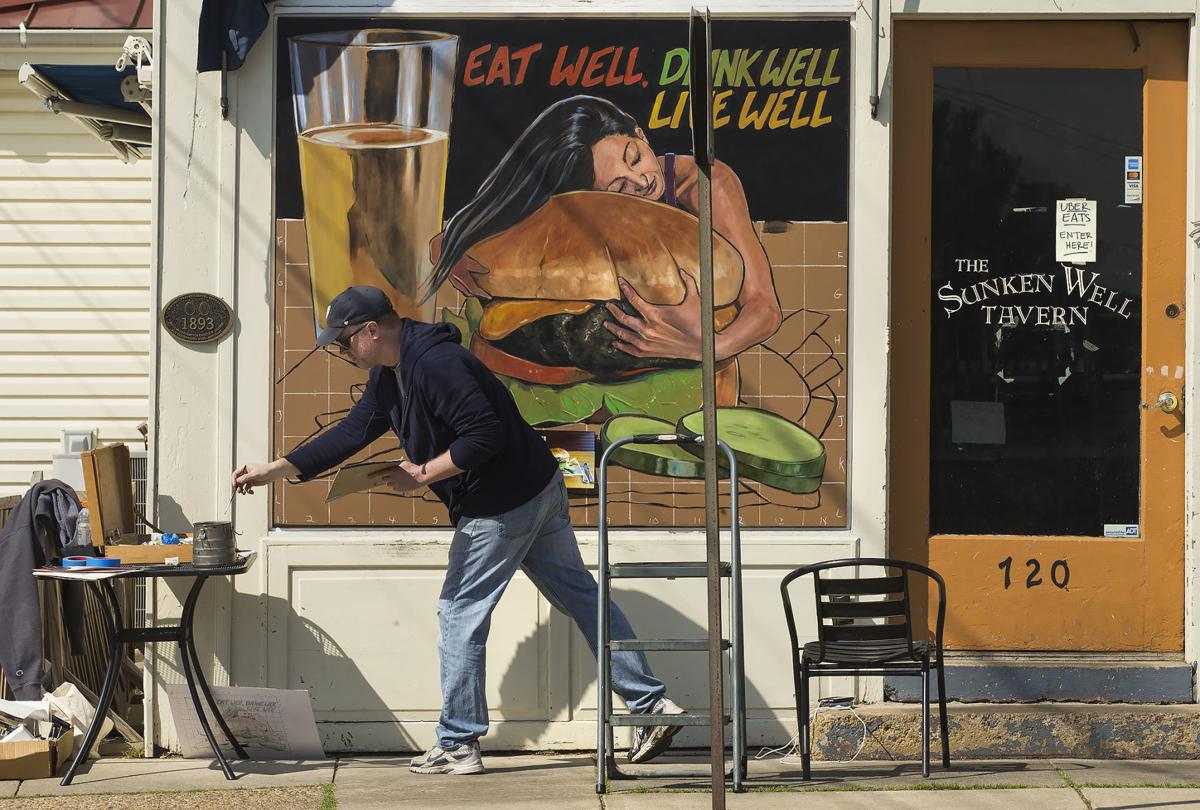 Local artist Bill Harris works on a mural in front of Sunken Well Tavern in Fredericksburg. Harris and fellow artist Gabriel Pons are doing the work free for owners Steve Cameli and Paul Stoddard to lighten the current mood. 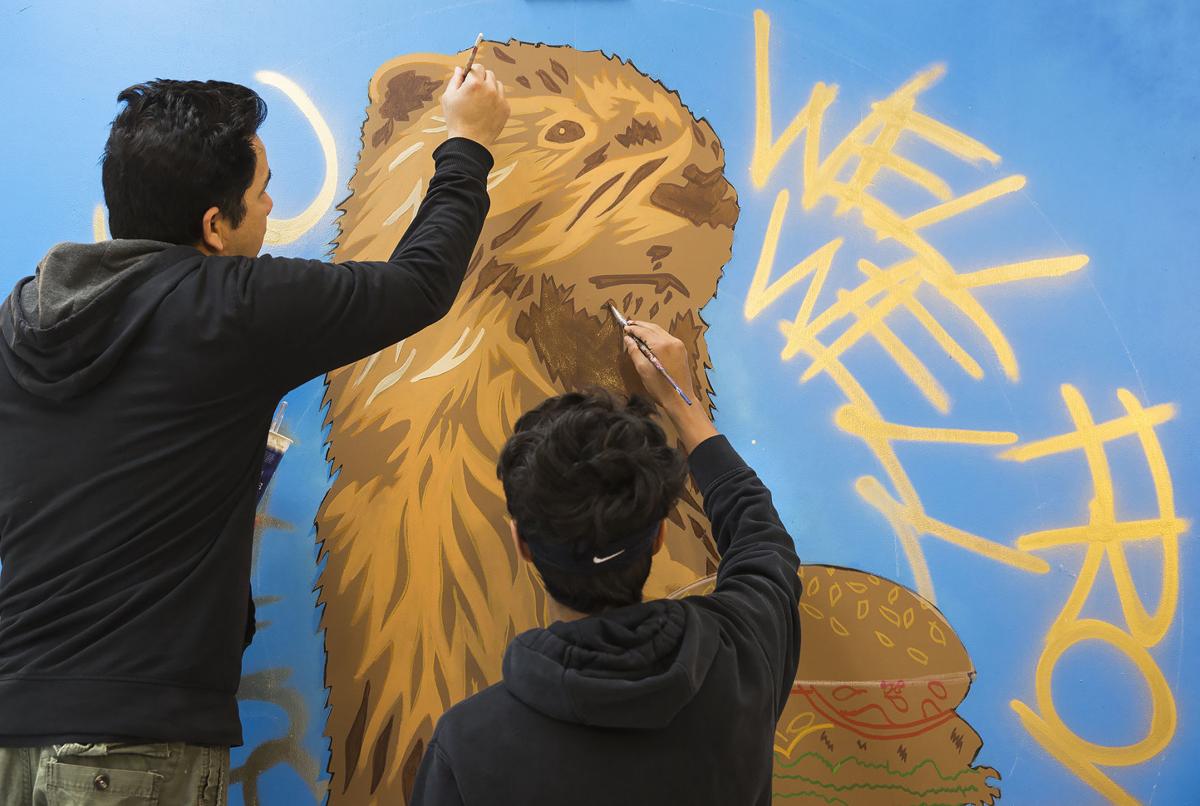 Pons and his son Diego, 14, work on the Sunken Tavern mural in the studio at their Stafford County home. The mural, depicting an otter holding a cheeseburger, will be installed next Bill Harris’ mural in front of The Sunken Well Tavern in Fredericksburg 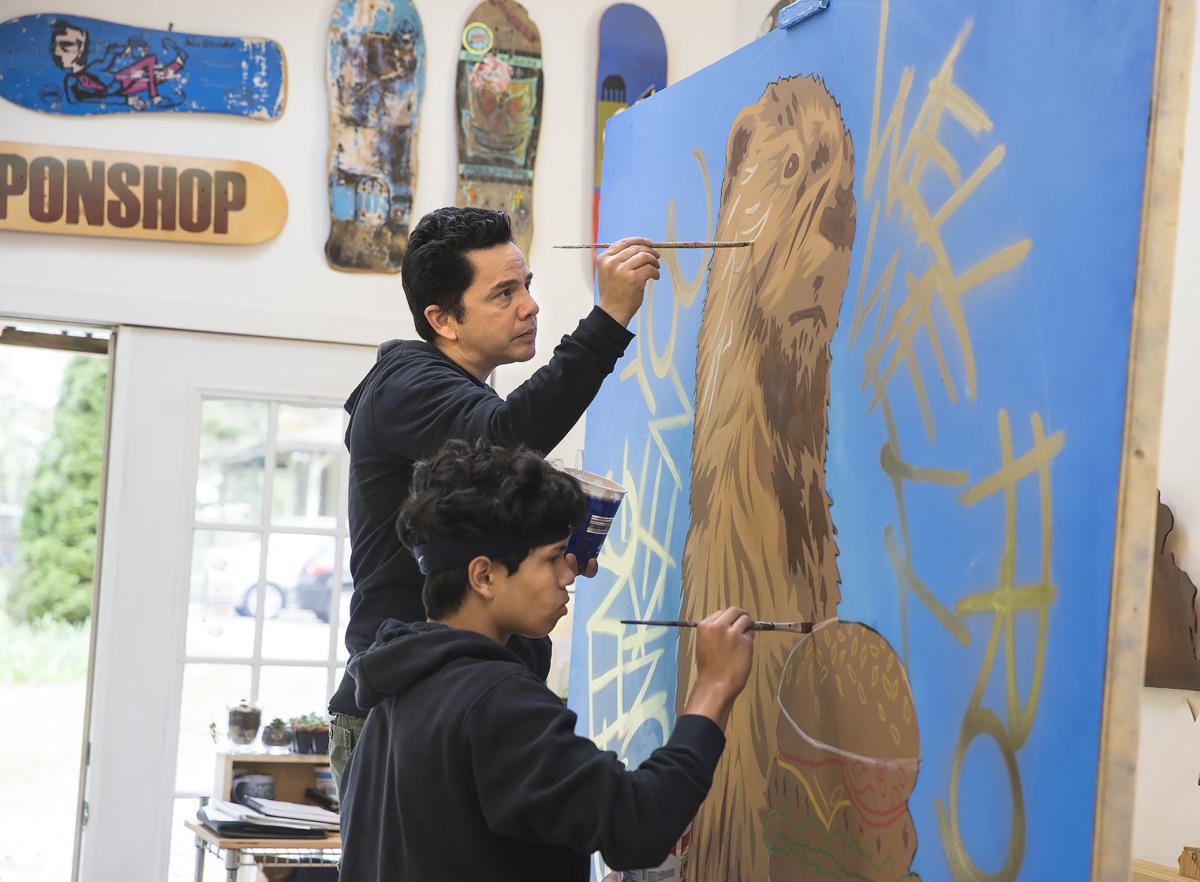 Gabriel Pons and his son Diego work on a mural depicting an otter holding a cheeseburger for the Sunken Well Tavern in Fredericksburg. 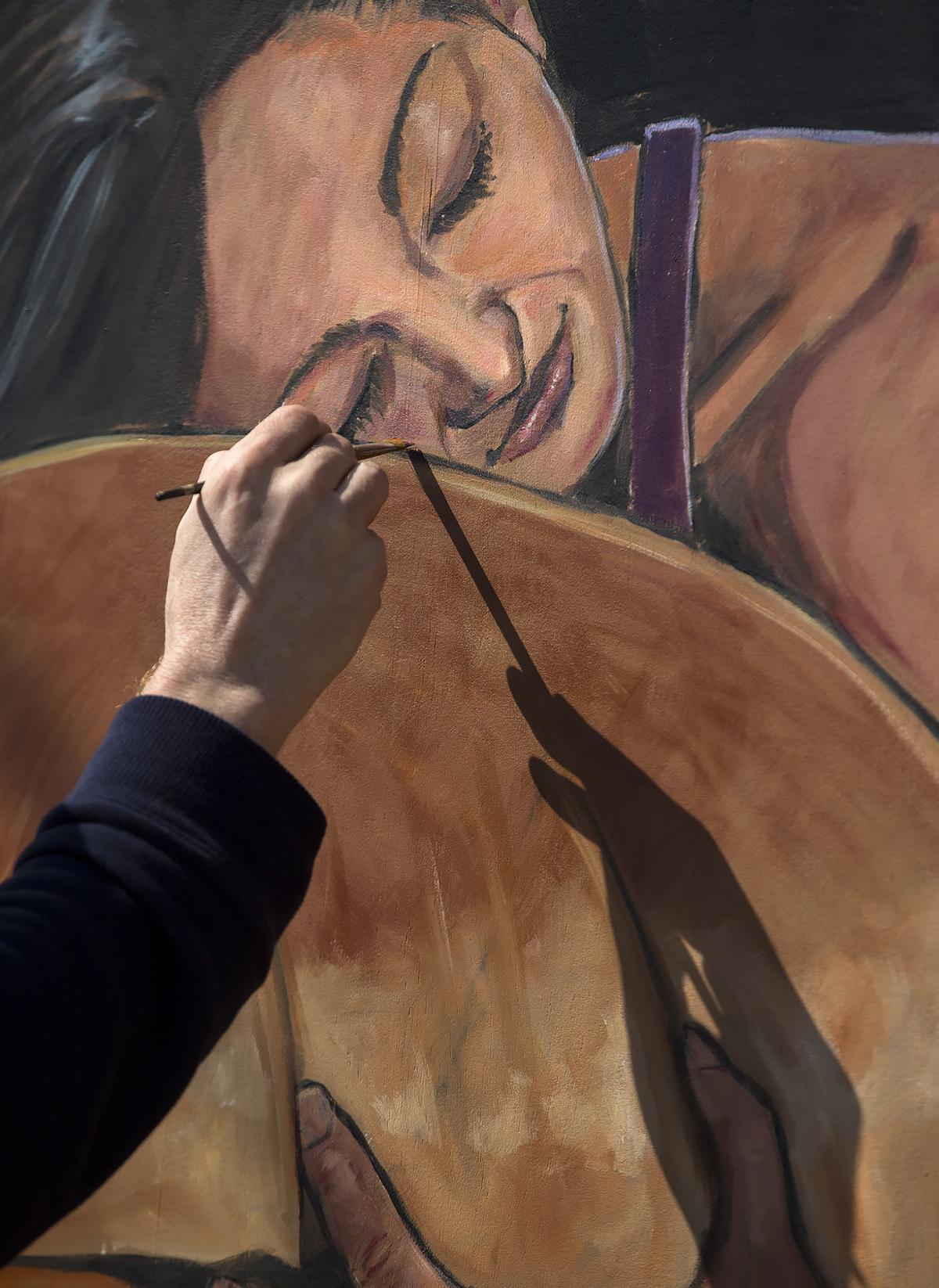 Bill Harris works on his panel of the free mural for the restaurant.

Looking for some attention for their restaurant and some joy for their souls, the owners of the city’s Sunken Well Tavern reached out to artists, seeking someone to paint a pair of murals.

What they got—from city artists Bill Harris and Gabriel Pons, and Pons’ son Diego—was an offer to do them each for free as a way to help support Sunken Well in what the coronavirus has made a challenging retail environment.

That act of kindness and support between two industries that have often been allied in downtown Fredericksburg—art and dining—is a good example of the sort of selfless act I plan to highlight in a new column feature called “Hometown Heroes.”

As we all struggle with the changes and challenges that the coronavirus has introduced to our lives, I think it’s a good idea to bring to light things people are doing to help—in ways both little and large—every day amid this battle against an unseen foe.

I’d like readers to nominate people they feel are “Hometown Heroes,” whether they are first responders or someone who’s made masks for doctors until their fingers are raw. Other examples might be the nurse who heads off into the fray every day, or someone who braves the crowds as a grocery store worker so people have food to eat.

At other times, I’ll focus on people like artists Bill Harris and the two members of the Pons family, who are creating big murals for free that could well help keep Sunken Well Tavern afloat.

(For more details on how and who to nominate as a Hometown Hero, see attached box. Full disclosure: the idea is a variation of a similar effort done by the newspaper in Charlottesville.)

I checked on the progress at Sunken Well on Sunday morning, socially distancing and then some, to ask about how the murals came to be.

Co-owner Paul Stoddard said the murals were the idea of his partner, Steve Cameli, as a way to attract some attention to the restaurant that’s doing take-out business, but had to close its dining room to customers.

“Steve’s idea was to generate something positive, and draw attention to the restaurant,” said Stoddard. “It’s kind of depressing when you’re standing inside and people walk by and look in the window but can’t come in. You feel sort of like a caged animal.”

Stoddard noted that it’s a little harder for the Sunken Well to get attention because it’s on Littlepage Street and off the beaten path of downtown. Hence the hope that bright, appropriately themed murals could make people driving by look twice.

For Harris, it wasn’t a hard decision to offer up his services for free, noting that the Sunken Well and other restaurants in Fredericksburg often hang art for sale. Ditto for Gabe Pons, who enlisted his talented 14-year-old son Diego to assist.

Both are creating images with rain-resistant paints on pieces of wood almost square, 70 by 79 inches. The paintings will hang over the restaurant’s large front windows.

Harris said the Sunken Well partners gave him and the Pons duo wide latitude in what to include in the mural, noting that it would be cool if they could somehow tie in the food.

Since the restaurant is known for its hamburgers—Stoddard calls them the best in town—burgers are finding their way into each of the murals.

“I got this crazy notion of having a woman hugging a big burger early on, and then said, no, that’s too much,” said Harris with a smile. “But it kept coming back to me and finally I gave in and went with it.”

He took a picture with a woman hugging two large pillows, then substituted a big burger for the pillows in a sketch he drew to fill the large space.

“I tried to make the reds and greens pop to draw the eye,” said Harris, who said he enjoys doing murals because it’s one of the rare times members of the public get to watch as art gets created. “I had people stopping by and watching and some came back day after day to see how it grew.”

Pons said he and his son worked on the mural in the studio in their Stafford County home to stay safe from the virus. Diego is a big fan and frequent consumer of Sunken Well’s burgers, so they were intent on including that delicacy in their mural, as well. There’s also an otter that restaurant regulars will recognize.

Pons is posting time-lapse videos on Instagram each day that he hopes will also bring Sunken Well “some much-needed attention online.”

“We’ve been happy to help out by doing this mural, which at the same time keeps the arts community in the public eye,” said Pons. “It’s also been a nice thing for my son and I to have something to work on together.”

Stoddard said the restaurant is thrilled to get these murals done free by people counted as friends.

“Once you get inside of the Fredericksburg community, you realize most everyone works in a small business,” he said. “We all know and help each other and this is just one more example of that.”

Columnist Rob Hedelt wants readers to nominate local people they feel are “Hometown Heroes” in the midst of this coronavirus. He wants to put faces with people out on the front lines of this crisis—be they medical staff or the person stocking shelves in an area grocery store. And also people who are going out of their way to be kind, helpful or making a difference in this tough time.

Nominations should come via email or U.S. mail, to rhedelt@freelancestar.com or to Rob at 1340 Central Park Blvd #100, Fredericksburg, Va., 22401. They need to contain the name and locality of the person doing the nominating, and the name and contact information for the person being nominated. It’s necessary to inform the nominated person aware before sending in a nomination.

How to invest your tax refund wisely

How to invest your tax refund wisely

The Stafford Baseball League was recently selected to host the Babe Ruth World Series for the 13–15 age group in August 2022, and league offic…

The Fredericksburg Nationals are celebrating Jackie Robinson's legacy with five $1,042 Germanna Community College scholarships to be awarded in June a part of the GCC/FredNats Jackie Robinson Essay contest.

Two restauranteurs who met while working at the Annabelle restaurant in Washington, D.C., have relocated to Fredericksburg to open Casey’s at …

5 home remodeling trends to watch for in 2021

Open floor plans are out; dedicated spaces for remote work and learning are in. Also, check out more home and personal finance advice from experts at NerdWallet, Forbes and the Motley-Fool.

It is an exciting time when you start your new business. You have so many things to think of that you may forget one of the most important aspects — taxes. Before you dive into the business world, take a few minutes to consider the tax aspects of your new business.

How To Save For Taxes If You Are A Freelancer

When Credit Card Debt Is Tax-Deductible

WHEN I take a new management position, I get to know the people I am working with. Then I look at data.

Your stimulus check can go further than you may think.

RICHARDSON: Properly prepare for the future

THE PANDEMIC has wreaked havoc on so many things in the last year. While many people infected with COVID-19 had milder cases, perhaps causing …

Local artist Bill Harris works on a mural in front of Sunken Well Tavern in Fredericksburg. Harris and fellow artist Gabriel Pons are doing the work free for owners Steve Cameli and Paul Stoddard to lighten the current mood.

Pons and his son Diego, 14, work on the Sunken Tavern mural in the studio at their Stafford County home. The mural, depicting an otter holding a cheeseburger, will be installed next Bill Harris’ mural in front of The Sunken Well Tavern in Fredericksburg

Gabriel Pons and his son Diego work on a mural depicting an otter holding a cheeseburger for the Sunken Well Tavern in Fredericksburg.

Bill Harris works on his panel of the free mural for the restaurant.