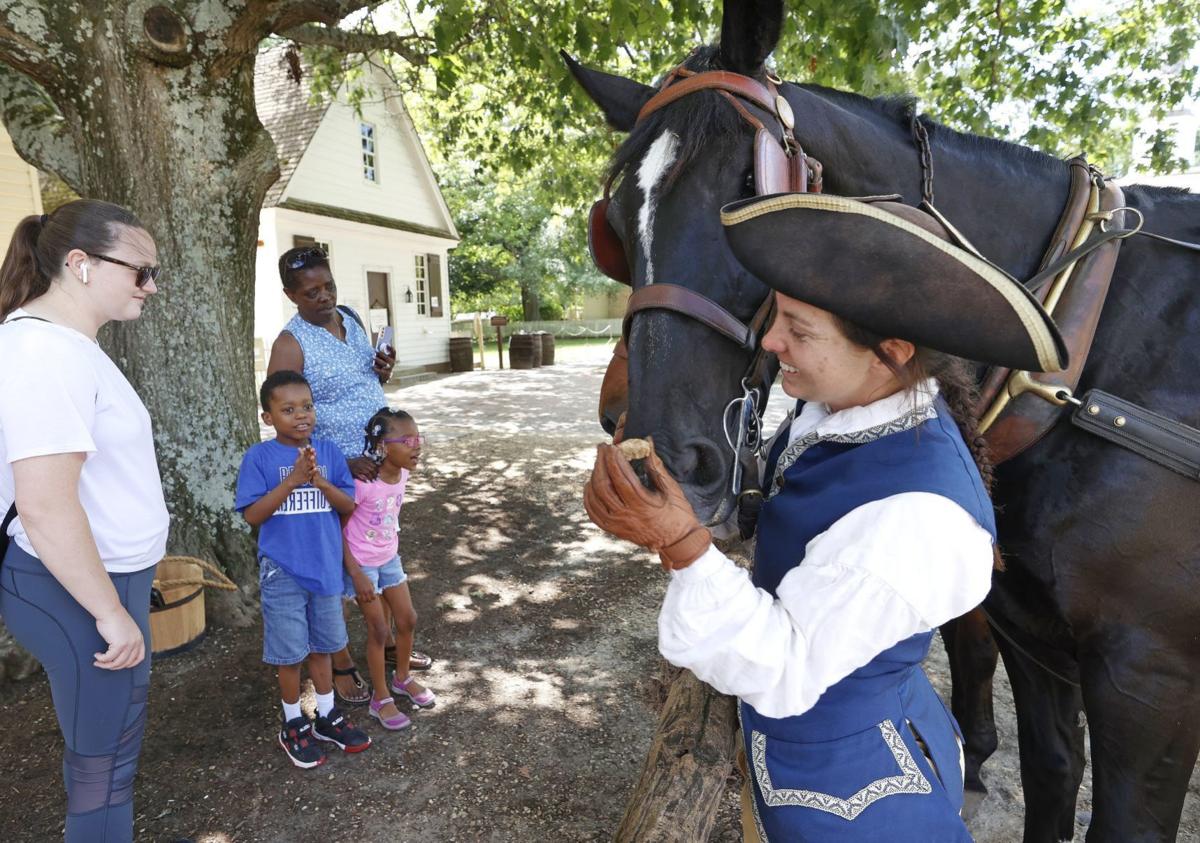 Coachman Lily Beattie shows Colonial Williamsburg visitors a treat she would feed Alex after he gave people a carriage ride. 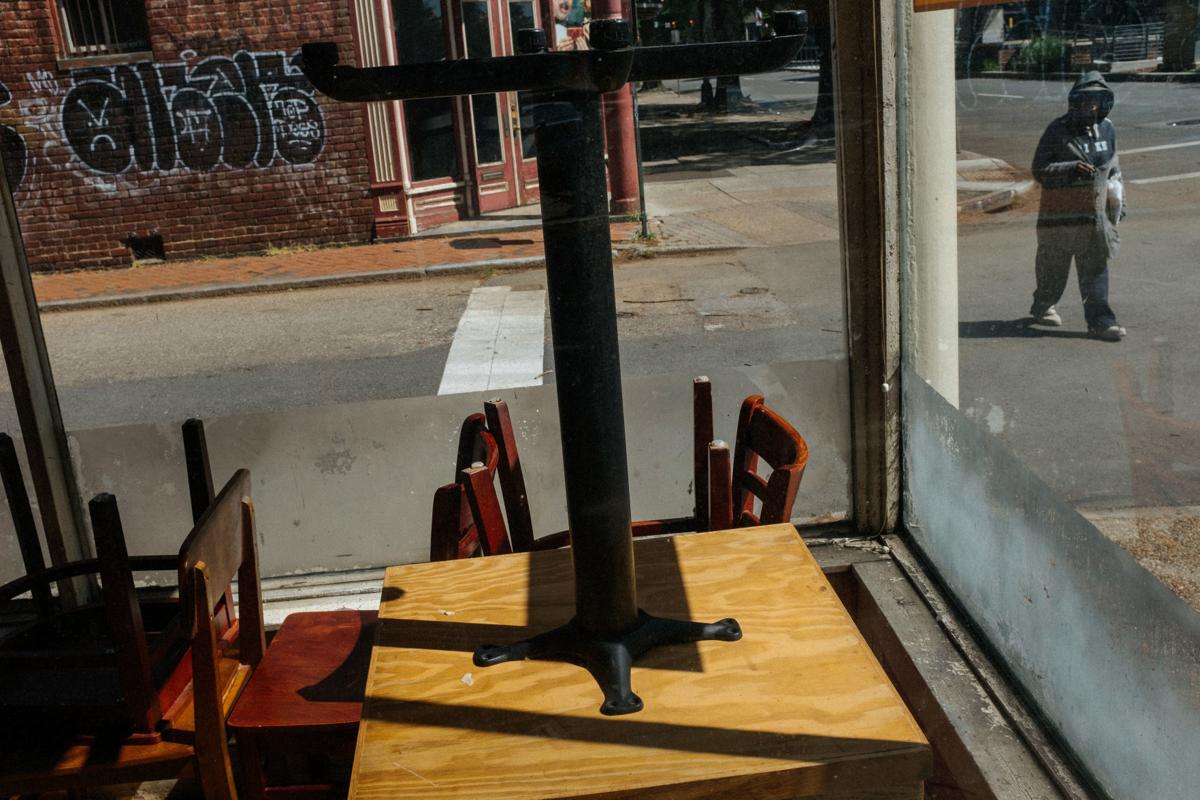 Amid the coronavirus pandemic, man walked by a closed restaurant in Jackson Ward in April. 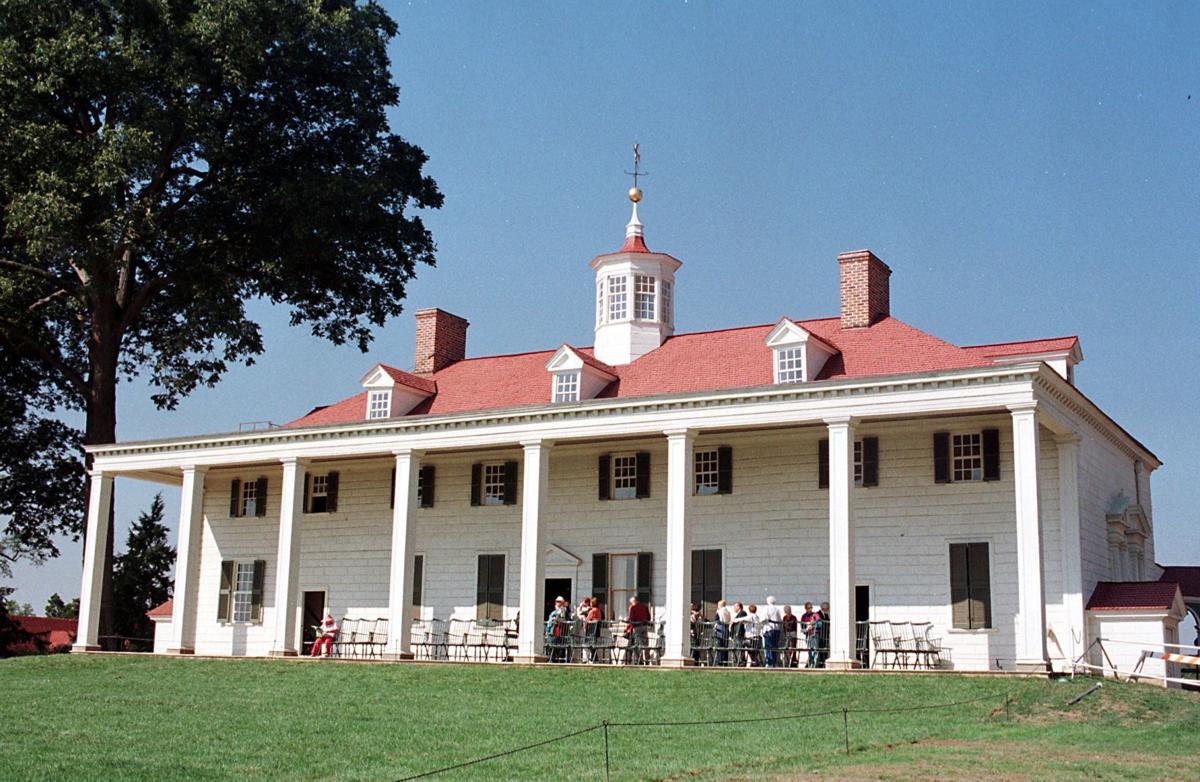 Mount Vernon, home of George Washington in Fairfax County, is among the state’s notable tourist attractions. 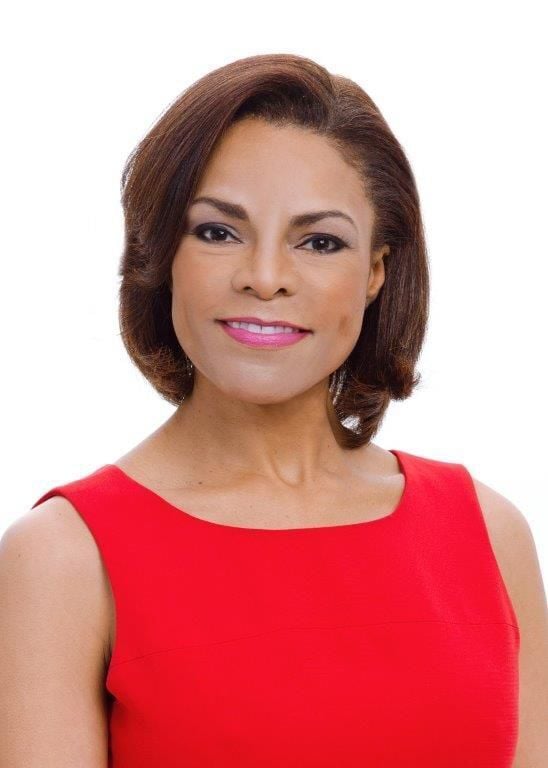 Rita McLenny is president and CEO of Virginia Tourism Corp. 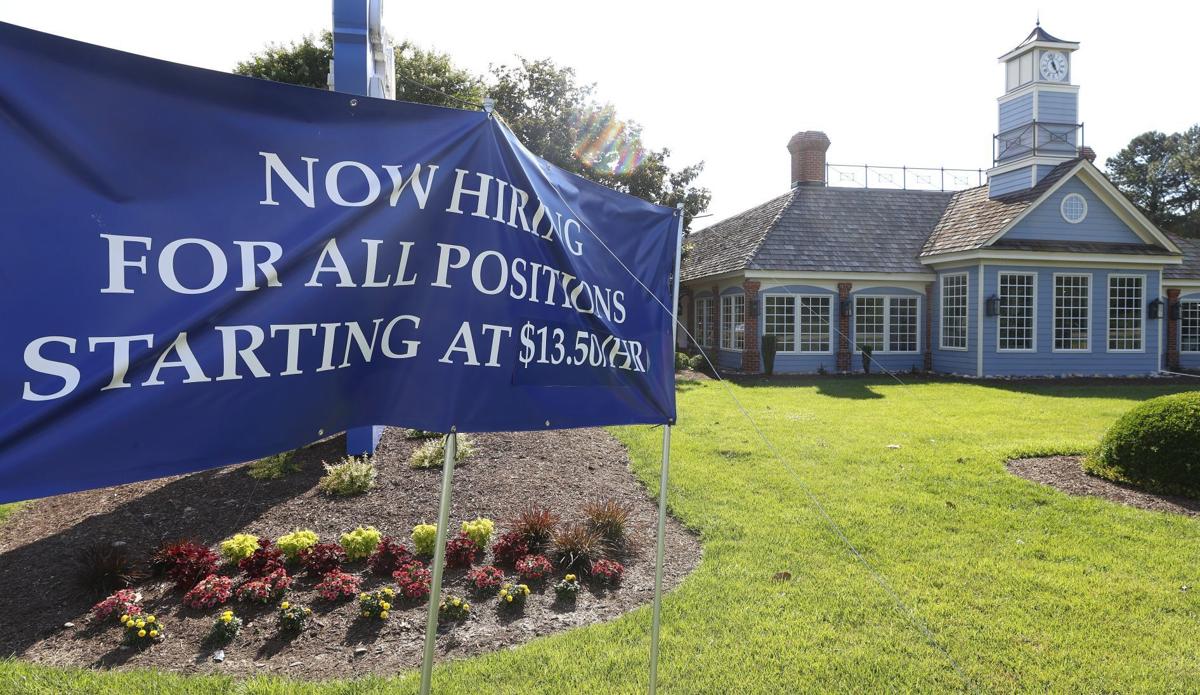 Restaurants, such as Captain George’s Seafood Buffet in Williamsburg, were hit particularly hard in the pandemic and lost about 100,000 jobs, according to Eric Terry, president of the Virginia Restaurant, Lodging and Travel Association.

Virginia has lost at least 3,200 restaurants permanently—thousands more remain temporarily shuttered—and about one-third of the 300,000 jobs that they supported.

Hotel rooms are unfilled, particularly in Northern Virginia, because of the disappearance of business and government travel.

Local governments that depend on lodging, meals and other taxes have looked elsewhere to fill holes in their operating budgets.

Virginia is about to end its nearly 16-month state of emergency for the COVID-19 pandemic, but the state’s shattered tourism industry is struggling to recover from an economic upheaval that disproportionately damaged businesses that depend on travel and entertainment.

“The $27 billion tourism industry stalled out in 2020,” Rita McClenny, president and CEO of Virginia Tourism Corp., told the Senate Finance & Appropriation Committee in a plea for financial relief on Tuesday.

With the General Assembly preparing to meet in special session on Aug. 2, McClenny asked the powerful Senate budget committee to provide $50 million to state and local tourism offices from the $4.3 billion in federal aid Virginia has received under the American Rescue Plan Act to help an industry that has lost $14.3 billion in revenues since the pandemic began.

Stunned legislators were ready to listen.

“You certainly made the case that tourism needs to be at the forefront of our discussions in special session,” Senate Finance Chair Janet Howell, D-Fairfax, told McClenny.

Tourism—and the many kinds of businesses that depend on it—accounts for a little over 10% of the state’s jobs, but it suffered 45% of the employment losses during the pandemic.

Many of the jobs lost were in restaurants—about 100,000—according to Eric Terry, president of the Virginia Restaurant, Lodging and Travel Association.

The association has asked the assembly for $275 million in federal aid from the American Rescue Plan Act, which President Joe Biden signed on March 11. The request includes the money the tourism corporation is seeking.

“It’s really, really slow to recover in the restaurant industry,” Terry said in an interview on Tuesday.

Relief has come slowly from the state, in part because the General Assembly seized control of the purse strings this year with language in the two-year state budget that requires Gov. Ralph Northam to receive its approval in determining how to spend the federal money over the next four years.

“From a business perspective, it’s slowed the relief down,” said Terry, whose members are receiving more timely help from Fairfax County and other local governments that are already distributing some of the nearly $3 billion they received under the federal emergency package.

Secretary of Finance Aubrey Layne said the Northam administration is asking the legislature to allow it to send to towns half of the $633 million coming from the federal package, as well as continue to distribute federal unemployment payments beyond June 30.

“If we don’t have the flexibility, it’s going to require us to be waiting until Aug. 2 to get some of the money out,” said Layne, who was making his final appearance before the Senate committee before leaving for an executive job in the health care industry.

Senate Republicans have been pushing Northam to call a special session sooner for the sole purpose of ending the additional $300 weekly federal unemployment benefit before its scheduled expiration on Sept. 6. They want to use the federal money instead to provide one-time hiring bonuses to people who will fill jobs that remain vacant despite demand for workers.

“The federal and state government are competing directly against the market, and the market is losing,” Sen. Steve Newman, R-Lynchburg, told Layne.

Northam is not likely to end the federal unemployment payments before Labor Day, Layne replied, but instead continue to spend the roughly $300 million remaining after the current state appropriation of federal dollars expires at the end of the fiscal year on June 30.

Virginia is likely to end the fiscal year with a revenue surplus of more than $1 billion because of the flood of federal money in the state economy and a surge in state tax collections that put revenues more than $3 billion ahead of where they were a year ago.

“Even in the hardest-hit areas of our economy, people are starting to go back to work,” Layne said.

However, businesses related to tourism didn’t fare nearly as well as other sectors of the economy, and the effects have varied widely across Virginia.

Luxury hotels and outdoor venues have fared much better than lodgings that rely on air and business travel, which fell sharply during the pandemic and “severely impacted” Northern Virginia, McClenny said.

Terry, at the lodging and travel association, said hotels in the region are just over 40% occupied.

Virginia lawmakers also face an urgent demand for money to hire and retain workers in critical state jobs, such as state mental hospitals that have been overwhelmed by admissions of people who don’t belong in them but can’t be refused because they have nowhere else to go.

“We can’t control our front door,” said Alison Land, commissioner of the Virginia Department of Behavioral Health and Developmental Services.

Two hospitals for adults—Central State near Petersburg and Eastern State near Williamsburg—are completely full, with no beds to spare. Three others are 99% full and three others also are operating at more than 90% of capacity. At the same time, nearly 200 patients are ready to leave, but can’t because communities lack services or places for them to live.

Almost all of the hospitals face serious staffing shortages, both for direct care jobs and professional positions.

The situation is most extreme at Commonwealth Center for Children and Adolescents in Staunton, which is filling only 24 of its 48 beds because it doesn’t have staff to safely handle more potentially violent and vulnerable young patients. The hospital, the only state psychiatric facility for children, is unable to fill 35% of its direct care jobs for aides and nurses.

“We’re extremely alarmed about our low staffing levels. ... We need to be able to operate safely,” Land told the Senate committee.

Howell, the chairwoman, said the state has made major investments to hire and retain staff at Commonwealth Center and other state hospitals, as well as to release patients who don’t need to be there and divert people from being admitted in the first place.

“It seems we’re still in a downward spiral when it comes to workforce,” she said. “We’re going to have to belly up to the bar on that one. It’s a moral imperative to me.”

State employees will receive a 5% raise in their next paycheck under the new budget. Unlike employees in state hospitals and prisons, one of the biggest challenges facing most of them is returning to their offices, rather than to work.

In many agencies, more than 90% of employees have worked remotely, relying on telecommunications, said Emily Elliott, director of the Department of Human Resource Management.

Some customer service centers haven’t reopened to the public—such as local offices for the Virginia Employment Commission and Department of Motor Vehicles—but many state employees are returning to their offices, attending meetings and directly delivering services to constituents.

State government is likely to evolve into a hybrid workplace—partly in the office and partly by remote “telework”—with different ways to measure productivity, Elliott told the Senate committee.

“We’re really focusing on how the work is being done,” she said, “as opposed to where it’s being done.”

Ingenious ways to earn income from your property

Ingenious ways to earn income from your property

Reasons opening a Health Savings Account (HSA) will save you

Reasons opening a Health Savings Account (HSA) will save you

After decades running an art and foundry business downtown, Wegner brothers bowing out

On a warm morning last week, Steven and Stewart Wegner poured molten bronze into more than a dozen molds.

Biden urged to act on outsourcing of West Virginia jobs

CHARLESTON, W.Va.—Dozens of labor and advocacy groups on Wednesday called on President Joe Biden to save nearly 1,500 jobs at a pharmaceutical…

The Free Lance-Star is offering a $1,000 sign-on bonus for carriers to deliver the newspaper to home delivery subscribers.

Professional bluegrass musician in Stafford turned to other skills in pandemic

At the start of 2019, business was looking good for Stafford County resident Frank Solivan and the bluegrass band he helped form.

Fredericksburg-area grocery retailers have been ringing up record sales since the pandemic upended people’s lives and shopping habits in March 2020.

I’m not a gardener, but I understand the concept of repotting plants.

Virginia’s upcoming recreational marijuana market will be subject to intense regulation from state officials, namely, a new regulatory board Gov. Ralph Northam filled out on Monday.

Coachman Lily Beattie shows Colonial Williamsburg visitors a treat she would feed Alex after he gave people a carriage ride.

Amid the coronavirus pandemic, man walked by a closed restaurant in Jackson Ward in April.

Mount Vernon, home of George Washington in Fairfax County, is among the state’s notable tourist attractions.

Rita McLenny is president and CEO of Virginia Tourism Corp.

Restaurants, such as Captain George’s Seafood Buffet in Williamsburg, were hit particularly hard in the pandemic and lost about 100,000 jobs, according to Eric Terry, president of the Virginia Restaurant, Lodging and Travel Association.