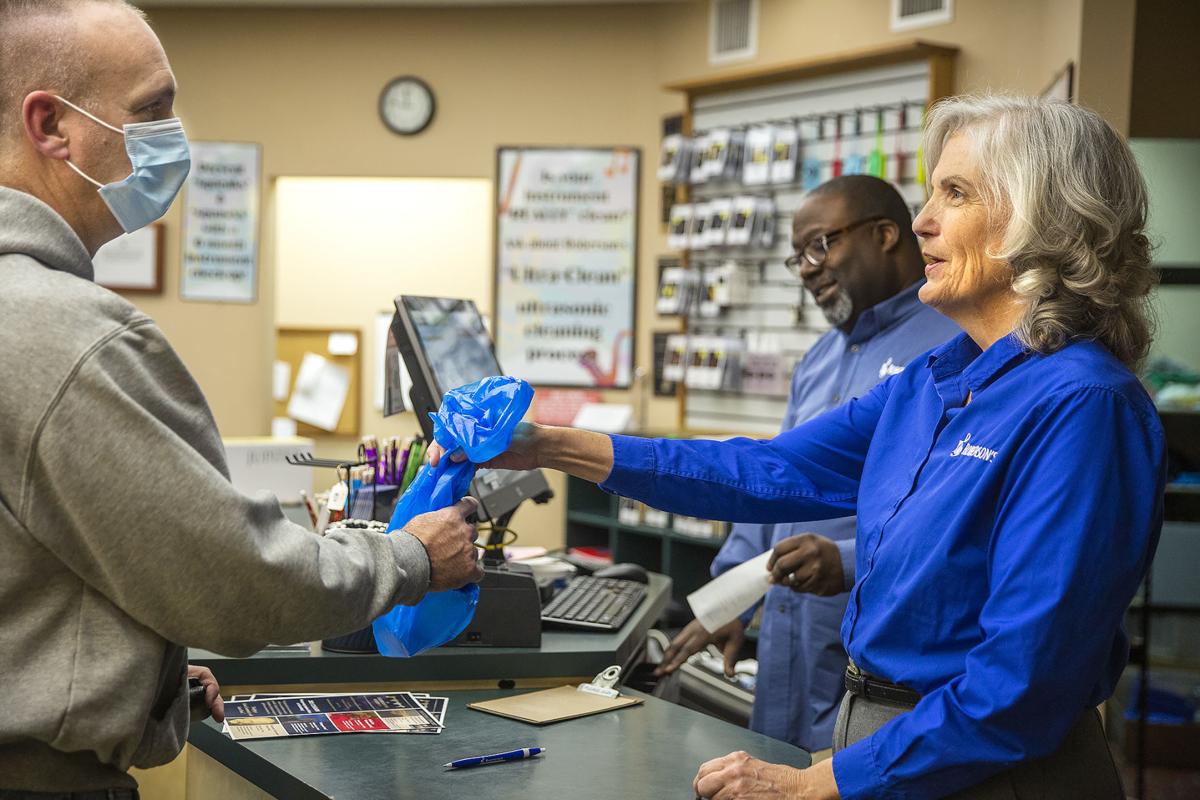 Roberson’s Music owner Sheila Burns and manager James Wilson help customer Bill Phillips with a purchase at the Fredericksburg store. Burns has decided to retire after 43-plus years in the city; the store will close Dec. 23. 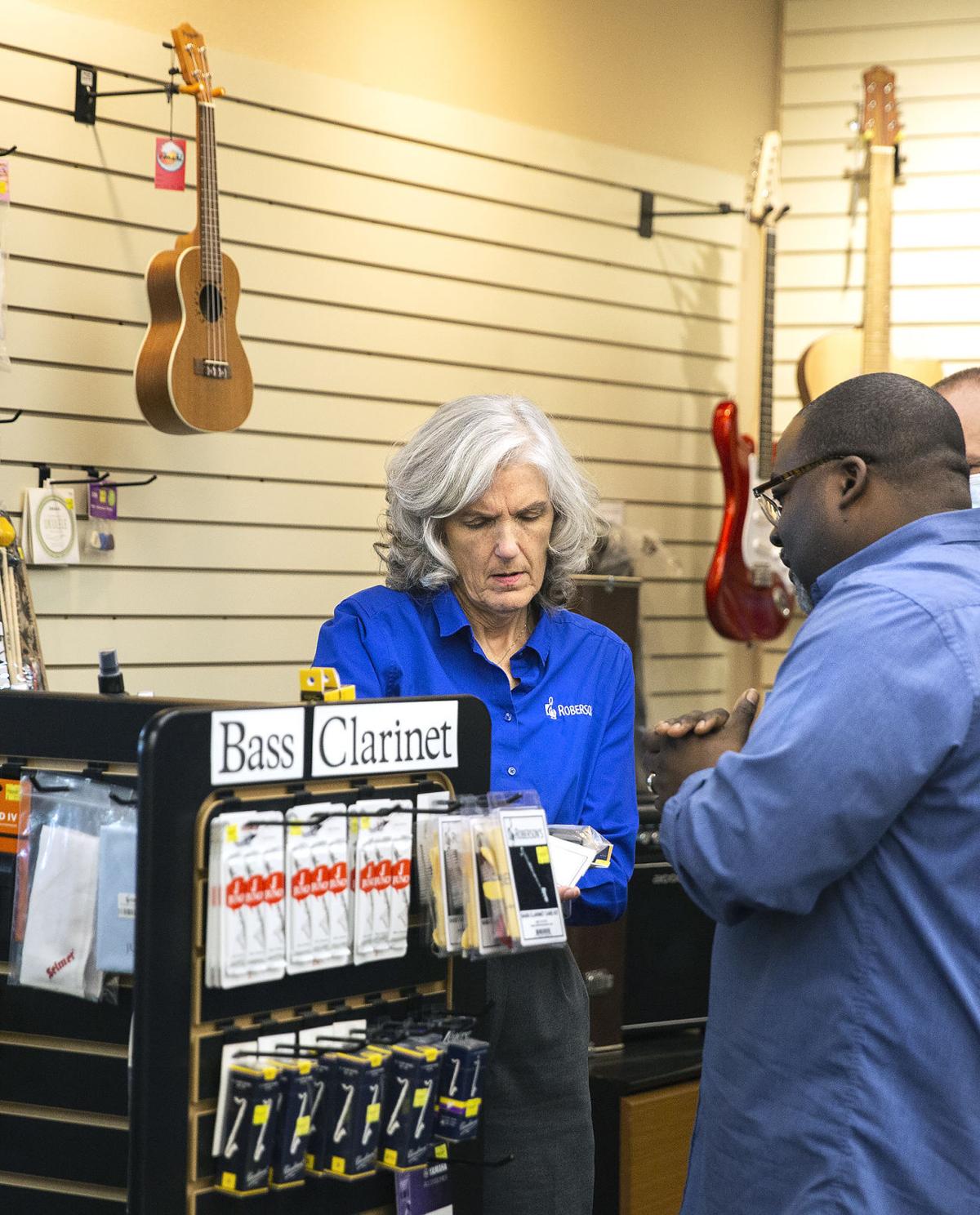 Burns and Wilson check the store’s stock. Roberson’s has been serving band students for four decades. 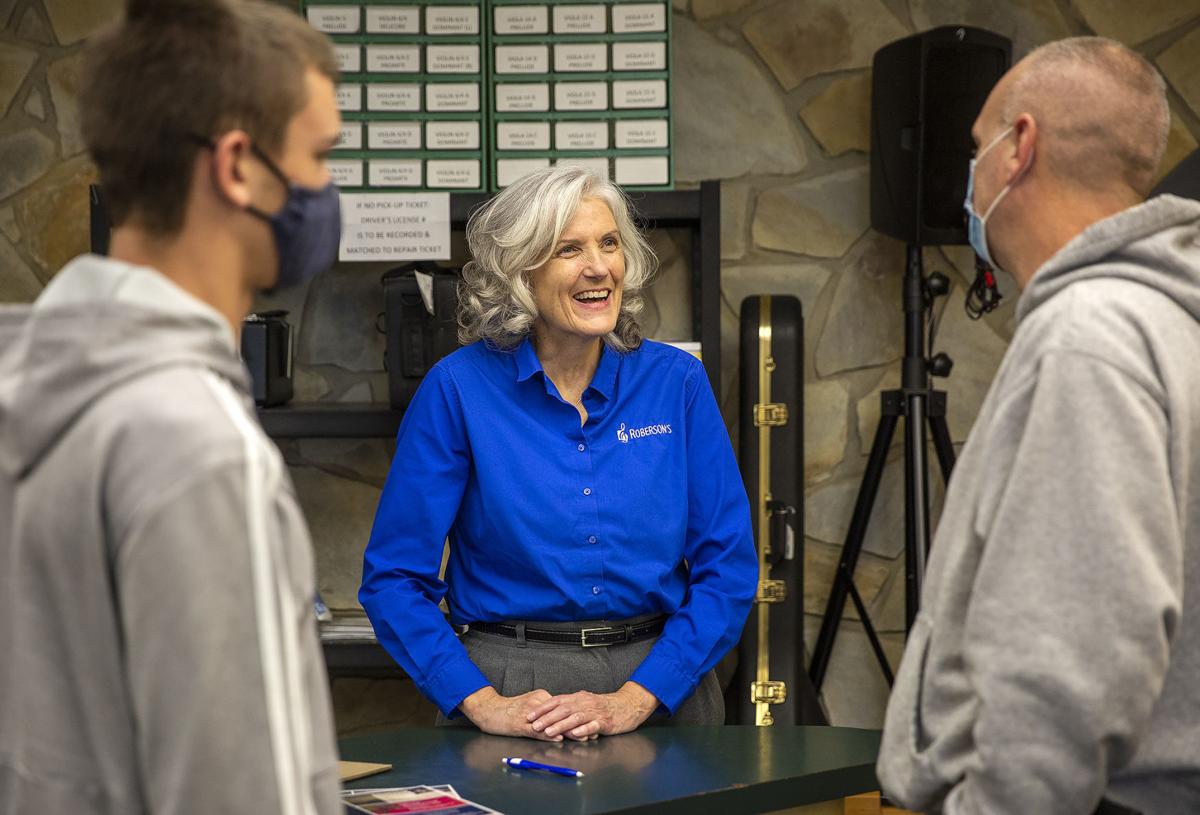 When Roberson’s Music first opened in 1978 in Richmond, it was a repair shop for area high schools.

But the owners both had ties to the Fredericksburg region and longed to return. They soon moved to the back end of a building on Hanover Street in downtown Fredericksburg.

They put up cots to sleep in at night and removed them in the morning because they couldn’t afford both a place to live and a place to conduct business.

Roberson’s grew from that small instrument repair shop into a full-service music store and studio with 26 teachers, more than 300 students and connections to just about every school band in the Fredericksburg area.

Owner Sheila Burns reflected on those humble beginnings recently as Roberson’s prepares to close on Dec. 23 after 40-plus years as a fixture in the community.

“Jokingly, I call it a repair business gone wrong,” Burns said. “I’m serving the fourth generation now. I’ve seen many of the students go on to become music educators. I’ve seen them go into several different branches of the military and join top honors bands. And thousands of them have had music as enjoyment in their life. … It’s quite phenomenal, actually.”

Burns and her first husband, Harry Roberson, started the business.

Once they arrived in Fredericksburg, they outgrew a series of locations.

On Hanover Street, Burns recalled they were in a building that’s since been torn down. There was a beauty salon in the front part of the building and Roberson’s owners had to endure the ever-present scent of perms.

The landlord eventually offered them an office on Caroline Street.

“We thought, how will we ever fill up this huge space?” Burns recalled. “Before long, we had outgrown that, so we moved a few doors down on Caroline Street.”

At that point, Burns’ father joined the staff and built studios, and they started offering private lessons as well as retail items. They continued to blossom there and had to relocate to Gateway Village off Plank Road.

In the early 1990s, Roberson’s purchased its final location at 1300 Jefferson Davis Highway in Fredericksburg. They couldn’t move into the facility until 1998 because they were still under the Gateway Village lease.

“For a while we had to support two places,” Burns said. “But it worked. When we got [to the current location], we went back to our roots of band and orchestra. Throughout all of this we maintained the repairs, lessons and rental service to the community.”

In Roberson’s early years at its current location, Burns remembers a young man practicing his instrument outside on the back stoop. He and his family lived at a nearby motel and he was prohibited from practicing on the motel’s property.

Burns invited the young man in to use the studio and kept his horn in good playing shape.

“He went on to be in the military band,” Burns said. “I haven’t been able to find him again. It’s been interesting just to see how nice [Roberson’s] has made the lives of many different people.”

Store manager James Wilson is one of those people. Wilson said his family purchased his first saxophone from Roberson’s when it was in Gateway Village.

The James Monroe High School graduate came aboard seven years ago. He’s since learned every aspect of the store and reconnected with former bandmates.

“This job has given me the opportunity to reach back and touch parts that I probably would’ve forgotten about,” Wilson said.

Burns is prepared to retire despite the continued success of the business.

She remarried after she and Harry Roberson divorced, and her second husband died in August 2020. Her mother died in January and her mother-in-law died a week later. A great aunt died a couple months after that.

“Within 10 months, I had four major people in my life pass, and that just made me start reflecting and thinking life is short,” Burns said. “Yes, I’ve done this for a long time. I enjoy it, but I need to start thinking about the future.”

Burns said her son is involved in ministry and has no desire to continue the business. Her grandchildren are too young.

She put the building on the market earlier this year thinking it would take a couple of years to sell. But it sold within a month and goes to closing in January.

An extended Black Friday sale at the store will lead up to closing two days before Christmas. Burns said the store’s instructors have found a place to continue teaching.

But some area band leaders said they’re unsure where to turn next.

There is another music store called KBI Music Shoppe at 4950 Southpoint Drive in Spotsylvania County. There are two in Stafford County: Bang! Music and Catfish Music, both on Garrisonville Road.

Rhonda Kapus, a band teacher at Spotsylvania and Berkley Elementary schools, said Roberson’s has been a part of her life since she played the flute as a 10 year-old. When she needed advanced music for her audition at Greensboro College, she relied on Roberson’s

Representatives from Roberson’s often attended family night at Kapus’ schools to further explain the instruments to band members and their parents. Roberson’s has also helped Kapus launch a ukulele program at her schools.

“They’ve been so incredibly helpful in my professional career,” Kapus said. “They’re like family. They know who you are and they want to do what’s best for you.”

U.S. consumer prices rise by most in nearly 40 years

The Fredericksburg Regional Chamber of Commerce is postponing its 2022 gala until the spring because of a surge in COVID cases.

SUSAN SPEARS: When a crisis comes, look to the list

Leaders often begin a new year with a fresh outlook, full of vigor and plans to make this their “best year ever.” They spend time in December …

GETTING THERE: Did 2021 give us a peek into the future?

Roberson’s Music owner Sheila Burns and manager James Wilson help customer Bill Phillips with a purchase at the Fredericksburg store. Burns has decided to retire after 43-plus years in the city; the store will close Dec. 23.

Burns and Wilson check the store’s stock. Roberson’s has been serving band students for four decades.