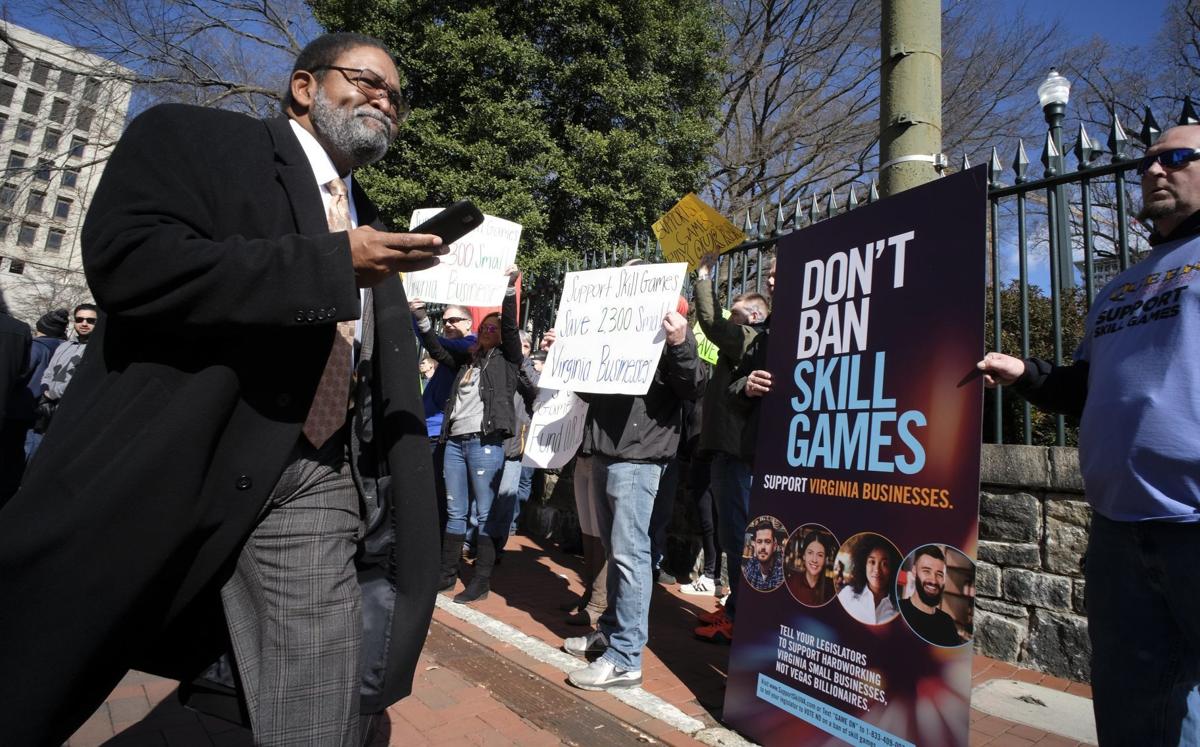 In February 2020, Del. Joe Lindsey, D-Norfolk, walked past opponents of a proposed ban on electronic skill games, who made their case outside the state Capitol. 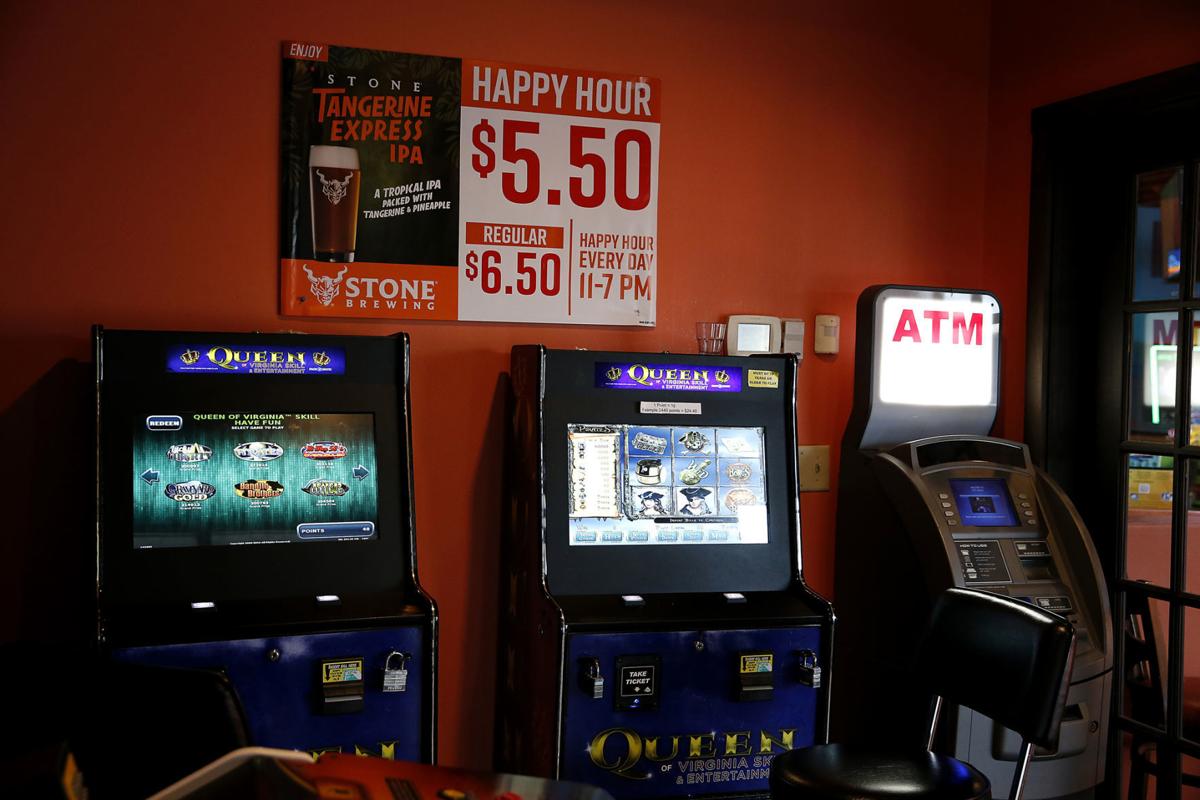 Proponents say electronic skill games have become a mainstay for thousands of convenience stores and restaurants. 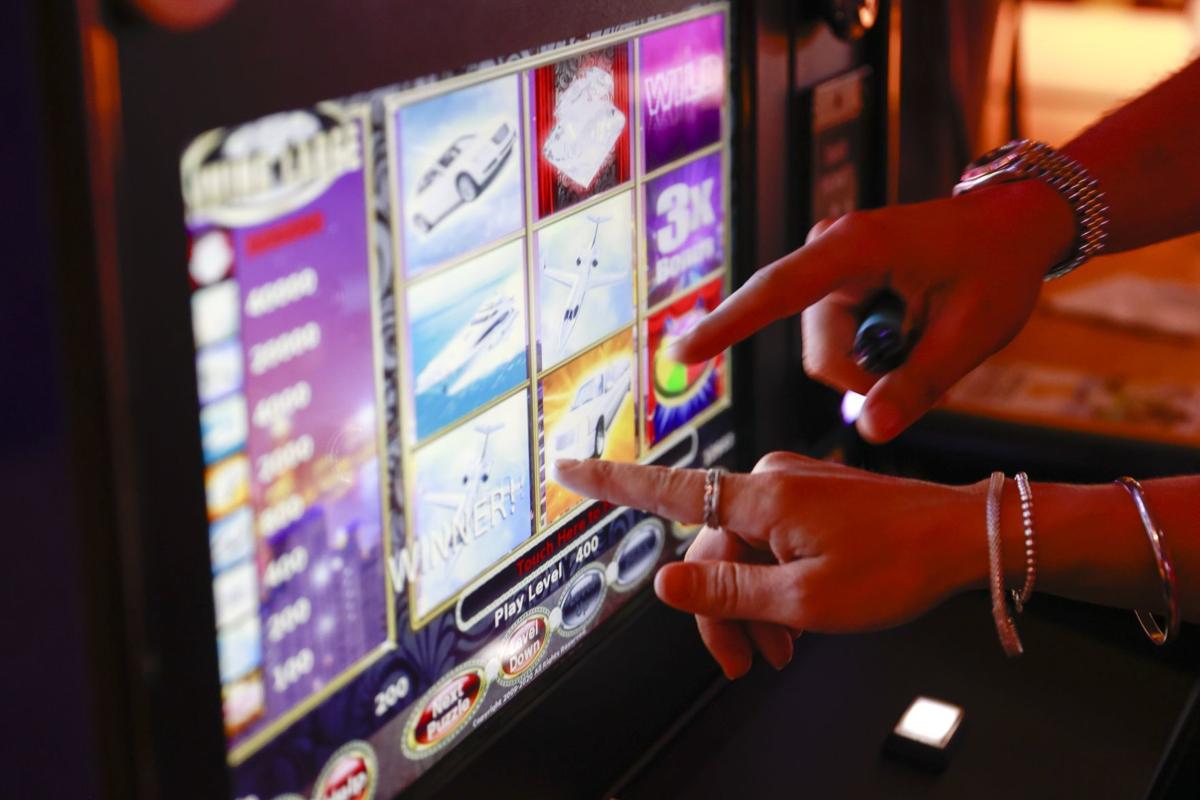 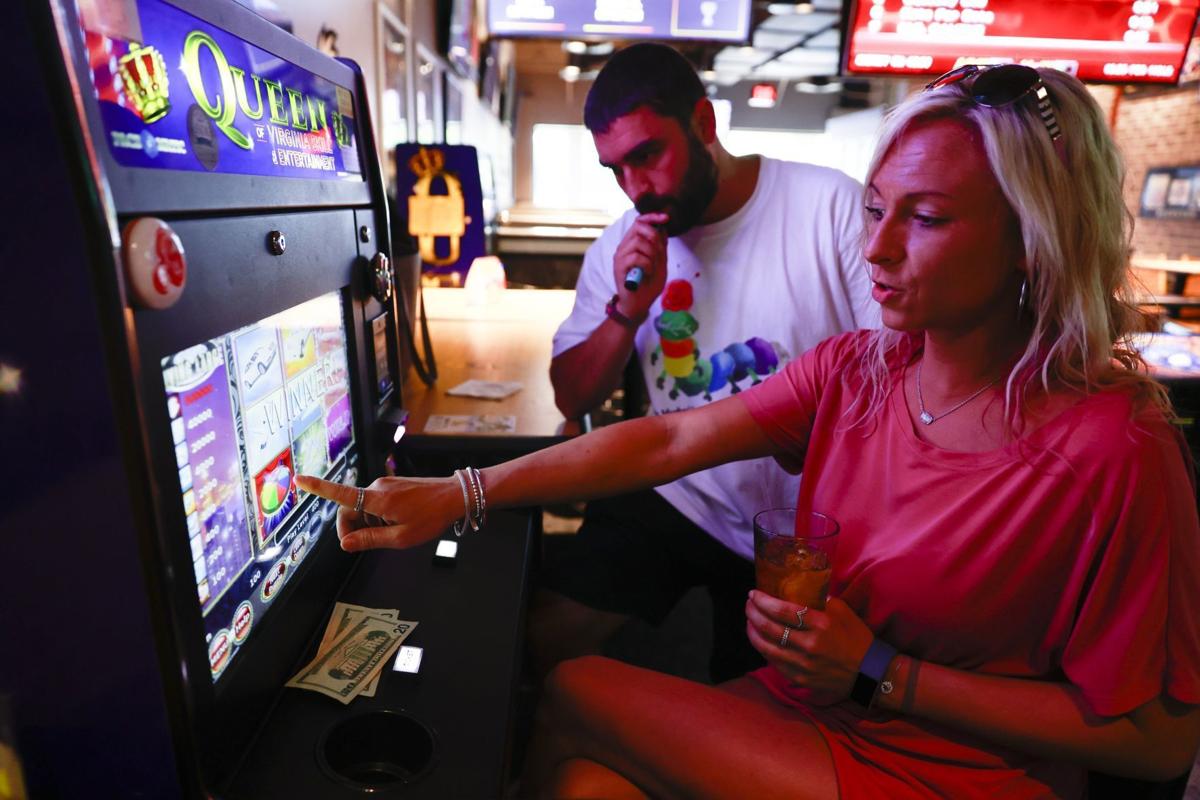 Michelle Whittaker plays on a electronic skill games machine as Pierce looks on at a Buffalo Wild Wings on Broad Street on Monday, June 28, 2021 in Richmond, Virginia. 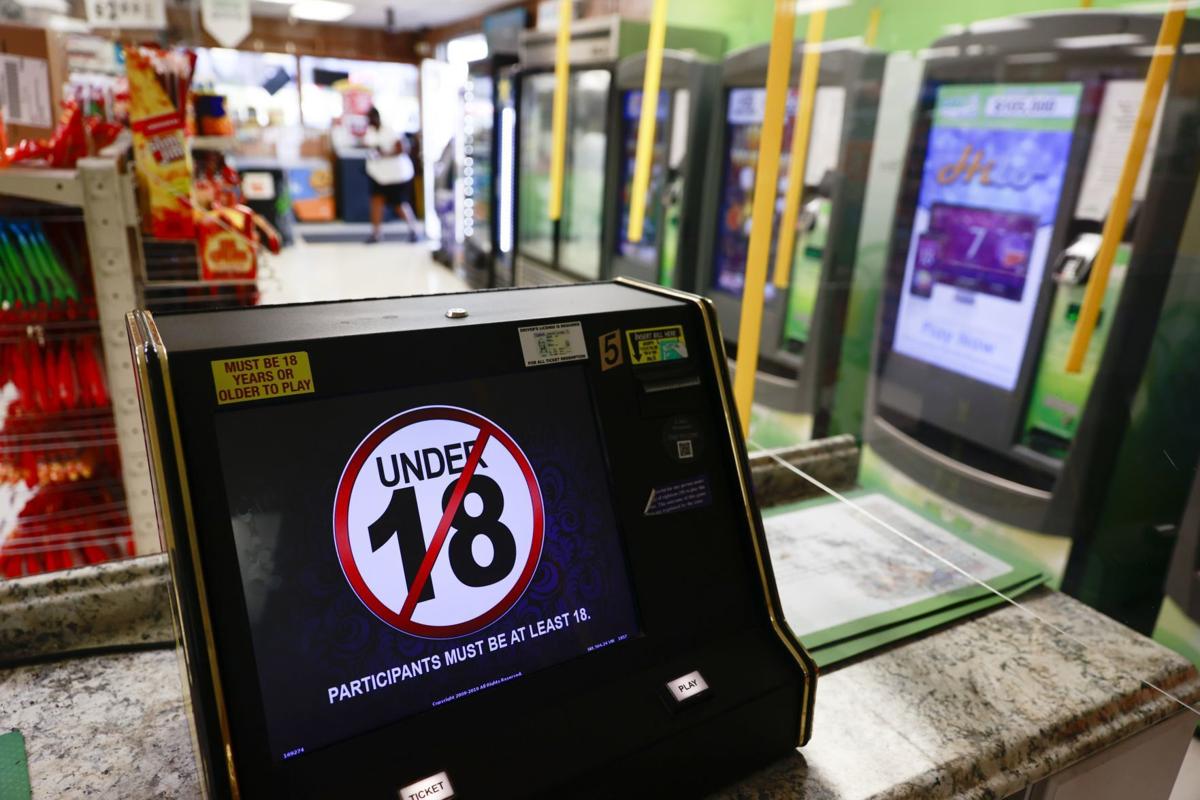 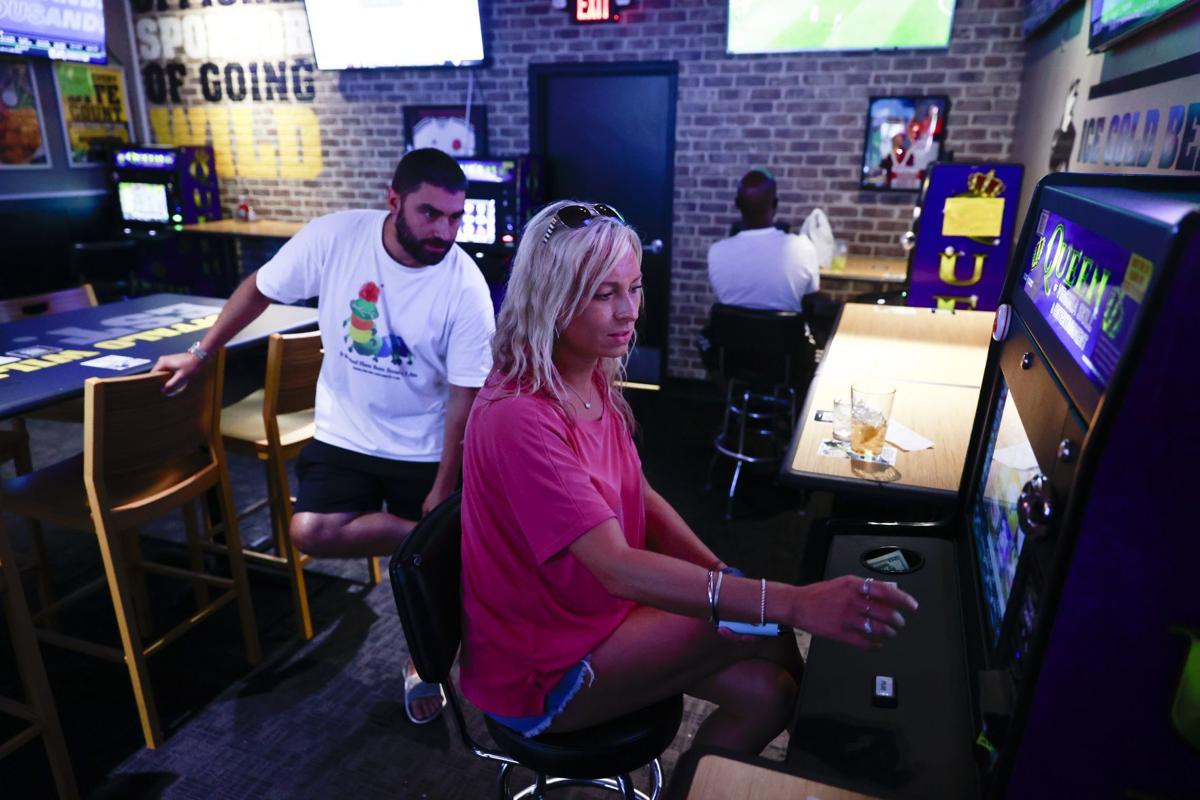 Michelle Whittaker plays on a electronic skill games machine as Pierce looks on at a Buffalo Wild Wings on Broad Street on Monday in Richmond. 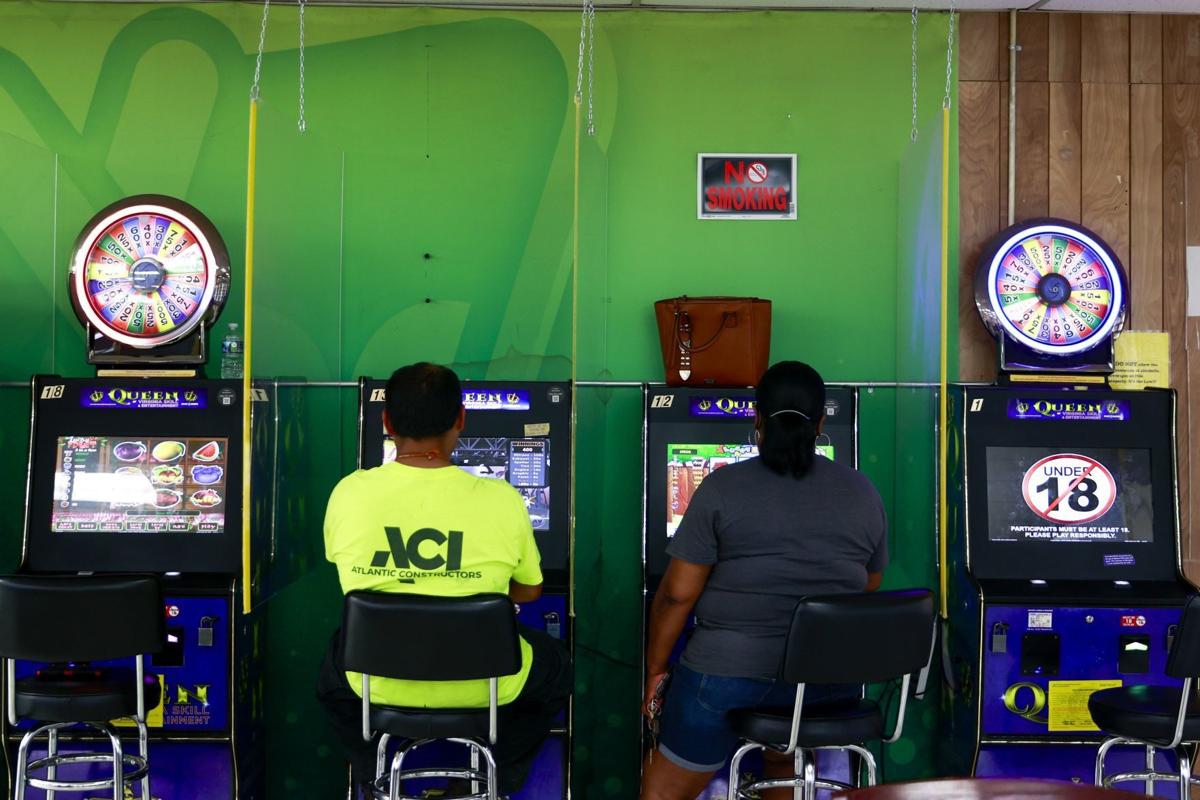 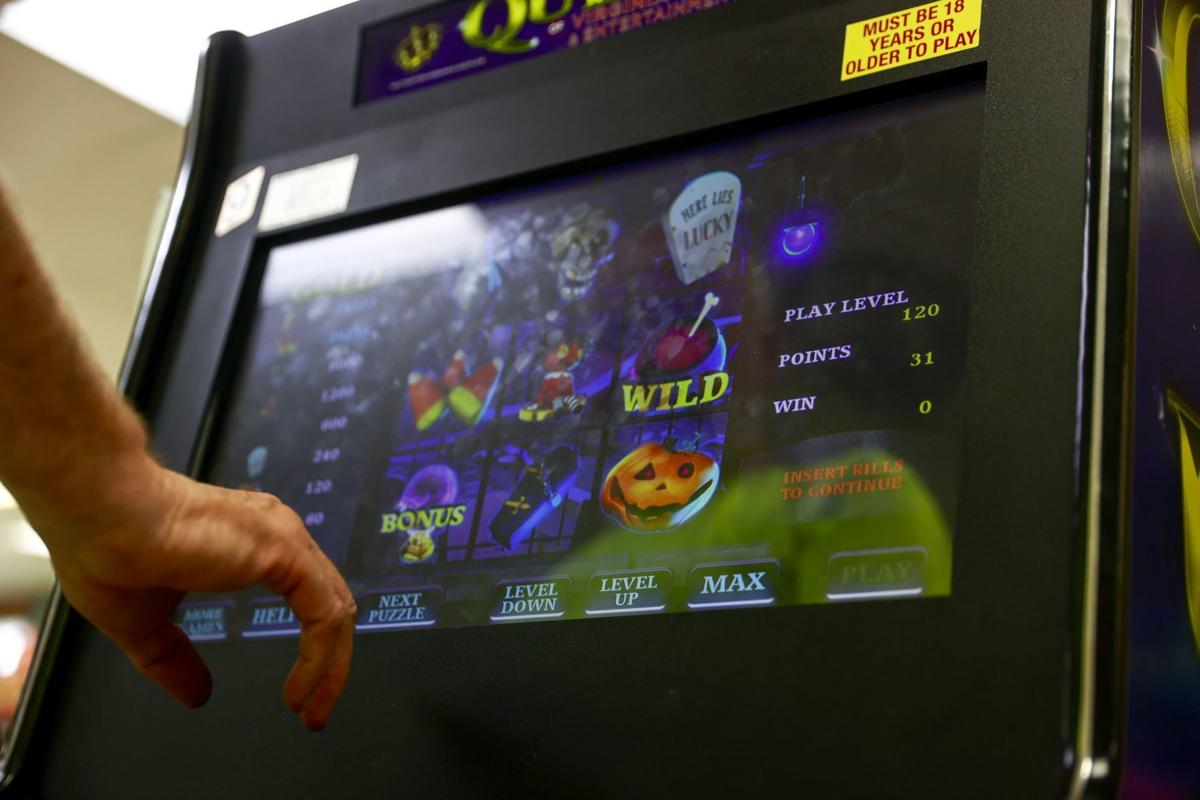 A person plays on a electronic skill games machine at Styles Bi-Rite Food Store on Monday, June 28, 2021 in Richmond, Virginia. 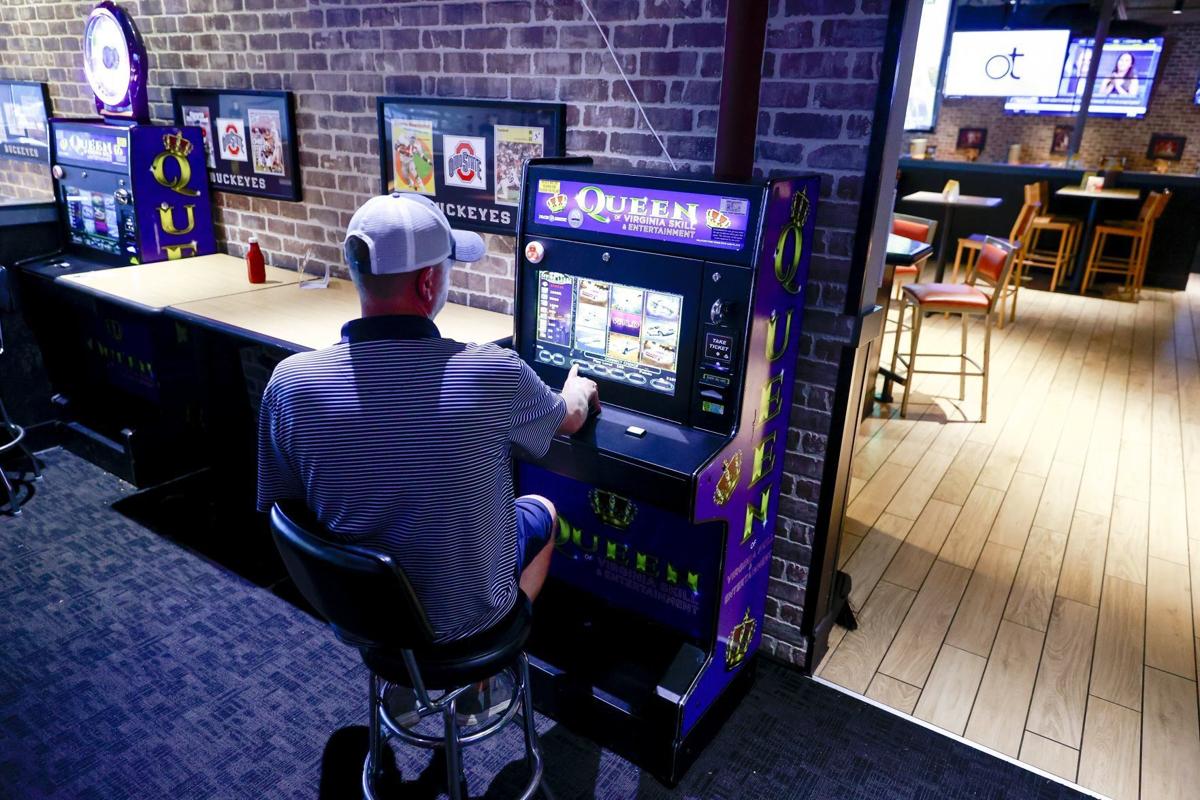 Electronic skill games were recently banned in Virginia, but some lawmakers want to bring video gaming terminals to convenience stores and restaurants.

A group of Asian American business owners is asking Virginia Attorney General Mark Herring to investigate what they call racial discrimination by the state in banning electronic skill games in stores they own that are frequented by racial and ethnic minorities.

The Asian American Business Owners Association, based in Roanoke, filed a complaint on Saturday with the attorney general’s office, which it also asked to effectively block the ban, scheduled to take effect on Thursday, by refusing to enforce it.

The 18-page complaint takes direct aim at the General Assembly for disparaging the games and the people who play them. Specifically, it cites public comments by Senate Minority Leader Tommy Norment, R-James City, referring to legislative efforts to perpetuate skill games as “the Ali Baba bill” and Senate Finance Chair Janet Howell, D-Fairfax, who called them “sleazy.”

It also claims that an exception to the ban for games in “family entertainment centers” discriminates against adults who are not gaming as families.

“In recent years, gaming has been embraced by the commonwealth when it is enjoyed by the privileged in fancy casinos or by children in ‘family entertainment centers,’” the complaint states. “But that very same activity is not acceptable when offered by Asian American owned convenience stores or enjoyed by minority or marginalized populations.”

The association, founded in 2007 as the Roanoke Valley Asian American Business Owners Association, says it represents about 200 convenience store owners, most of them Indian.

“What we are looking for is a level playing field,” said Dharmendra Patel, president of the association and president of a Roanoke-area property management company that owns several convenience stores that offer electronic skill games.

The discrimination complaint intensifies a high-stakes political battle of what constitutes legal gambling in Virginia, which has already opened the door to gambling at up to five casinos—sports betting and operation of terminals that look like slot machines, but operate on historical horse racing data in Rosie’s Gaming Emporiums in Richmond and four other localities.

“The commonwealth has legalized virtually all forms of gaming, leaving skill games out and marginalizing an entire community,” said Stephen Faraci, a Richmond lawyer for the association.

The complaint follows an unrelated lawsuit that Sen. Bill Stanley, R-Franklin County, filed last week in state court that alleges an unconstitutional violation of business owners’ rights to free speech and due process, and seeks an injunction to stop the ban from taking effect. The suit, filed on behalf of Southside business owner Hermie Sadler in Greensville County Circuit Court, is not likely to be heard before the ban takes effect, Stanley said Monday.

A hearing is scheduled in Norfolk Circuit Court on Wednesday on another lawsuit, filed last week on behalf of Himan Patel and four other owners of small businesses whose electronic skill games would be shut down by the pending ban.

The Norfolk suit, like the complaint filed by the Roanoke association, asserts that the businesses are protected from discriminatory treatment under the Virginia Human Rights Act, which the assembly adopted last year, according to Del. Steve Heretick, D-Portsmouth, one of the lawyers for the business owners

Norment and Howell quickly defended their statements in support of the ban. They said it was necessary to stop the proliferation of thousands of previously unregulated machines in restaurants, convenience stores and truck stops, often in direct competition with the state-owned Virginia Lottery that dedicates its profits to public education.

“Give me a break!” Norment responded in a text message that noted that “Ali Baba and the Forty Thieves” was a folk story about a poor woodcutter in the “One Thousand and One Nights” collection translated into French in the 18th century.

“It is fiction just like the Asian Americans’ fictional argument [which] I expect some creative attorney conjured up in his sleep,” he said.

The complaint says the tale of “Ali Baba and the Forty Thieves” has been “used to advance racist stereotypes and caricatures about people from the Middle East,” and includes examples from Popeye the Sailor cartoons and a 1937 film featuring singer Eddie Cantor in blackface.

Howell, the first woman to chair the Senate Finance and Appropriations Committee, texted, “I stand by my characterization” of the games.

She called them “unseemly” and “sleazy” during a legislative debate last year. The assembly agreed to a one-year reprieve that Gov. Ralph Northam requested in order to tax the machines and devote the new revenues to helping small businesses hurt by restrictions to stop the spread of the coronavirus.

She said she was not referring to the small businesses that operate the “gray machines,” so named because they had thrived in a previously unregulated market as purportedly legal games of skill rather than illegal games of chance, or gambling.

“I was referring to the big businesses that brought them into our state without permission or oversight,” Howell said.

Last year, the General Assembly voted to allow casino gambling and sports betting during the same session that it adopted the initial ban on skill machines. The assembly agreed to delay the ban for one year, while taxing the machines at a monthly rate of $1,200 per machine and regulating them through the Virginia Alcoholic Beverage Control Authority, which manages the state’s liquor monopoly created at the end of Prohibition to control the sale of alcohol.

Before delaying the ban, however, Howell and other legislators secured a promise from Northam to oppose and veto any legislation that would extend the legal operation of the machines, which generated more than $100 million in tax revenue for the state in the past year.

Northam lived up to the promise this spring by asking the assembly to strike a provision that had been added to a separate bill to allow the machines to continue operating legally until July 1, 2022. The assembly struck the provision during its one-day “veto session” in April, despite opposition from Stanley and Sen. Joe Morrissey, D-Richmond.

Morrissey, in a speech on the Senate floor, said the pending ban “discriminates against small businesses,” which he said are often run by Indian, Pakistani, Yemeni and African American merchants who have depended on lucrative revenues from the machines to survive the pandemic and state-ordered restrictions on businesses to stop the spread of the virus.

“I don’t want to see any discrimination against any particular group,” Morrissey said in an interview on Monday.

“Do I think there is some discrimination going on?” he asked. “Yeah, I do.”

Dean Alshami, a leader of the Yemeni community in Richmond, said Monday, “Richmond businesses are built on Black-owned and Asian-owned businesses. And we should be protected by the law, not be the first people targeted by the law and by the people we elected to be our representatives in the state and in the federal government to protect our freedom and to protect our businesses.”

Last week, Morrissey hosted a radio show that featured Sadler, a former NASCAR driver who had just filed the lawsuit in Greensville on behalf of a truck stop he operates along Interstate 95 in Emporia and convenience stores he owns in Petersburg and other Southside communities.

The show also featured a lobbyist for video gaming terminal operators that are still pushing for legalization of slot machines, which would go into many of the same retail locations as skill games.

“We think we’ve got a much better alternative,” said Richmond attorney Steve Baril, who represents Golden Entertainment, based in Las Vegas, and other slot machine manufacturers.

Sen. George Barker, D-Fairfax, chairman of the Senate General Laws Committee, confirmed Monday that he is preparing a letter to authorize a study.

Baril and his clients lobbied hard last year against a proposal to legalize skill games that they said had evaded state regulation by claiming they were not games of chance prohibited as gambling.

“From our perspective, that ship has sailed,” he said.

U.S. consumer prices rise by most in nearly 40 years

The Fredericksburg Regional Chamber of Commerce is postponing its 2022 gala until the spring because of a surge in COVID cases.

SUSAN SPEARS: When a crisis comes, look to the list

Leaders often begin a new year with a fresh outlook, full of vigor and plans to make this their “best year ever.” They spend time in December …

GETTING THERE: Did 2021 give us a peek into the future?

In February 2020, Del. Joe Lindsey, D-Norfolk, walked past opponents of a proposed ban on electronic skill games, who made their case outside the state Capitol.

Proponents say electronic skill games have become a mainstay for thousands of convenience stores and restaurants.

Michelle Whittaker plays on a electronic skill games machine as Pierce looks on at a Buffalo Wild Wings on Broad Street on Monday, June 28, 2021 in Richmond, Virginia.

Michelle Whittaker plays on a electronic skill games machine as Pierce looks on at a Buffalo Wild Wings on Broad Street on Monday in Richmond.

A person plays on a electronic skill games machine at Styles Bi-Rite Food Store on Monday, June 28, 2021 in Richmond, Virginia.

Electronic skill games were recently banned in Virginia, but some lawmakers want to bring video gaming terminals to convenience stores and restaurants.