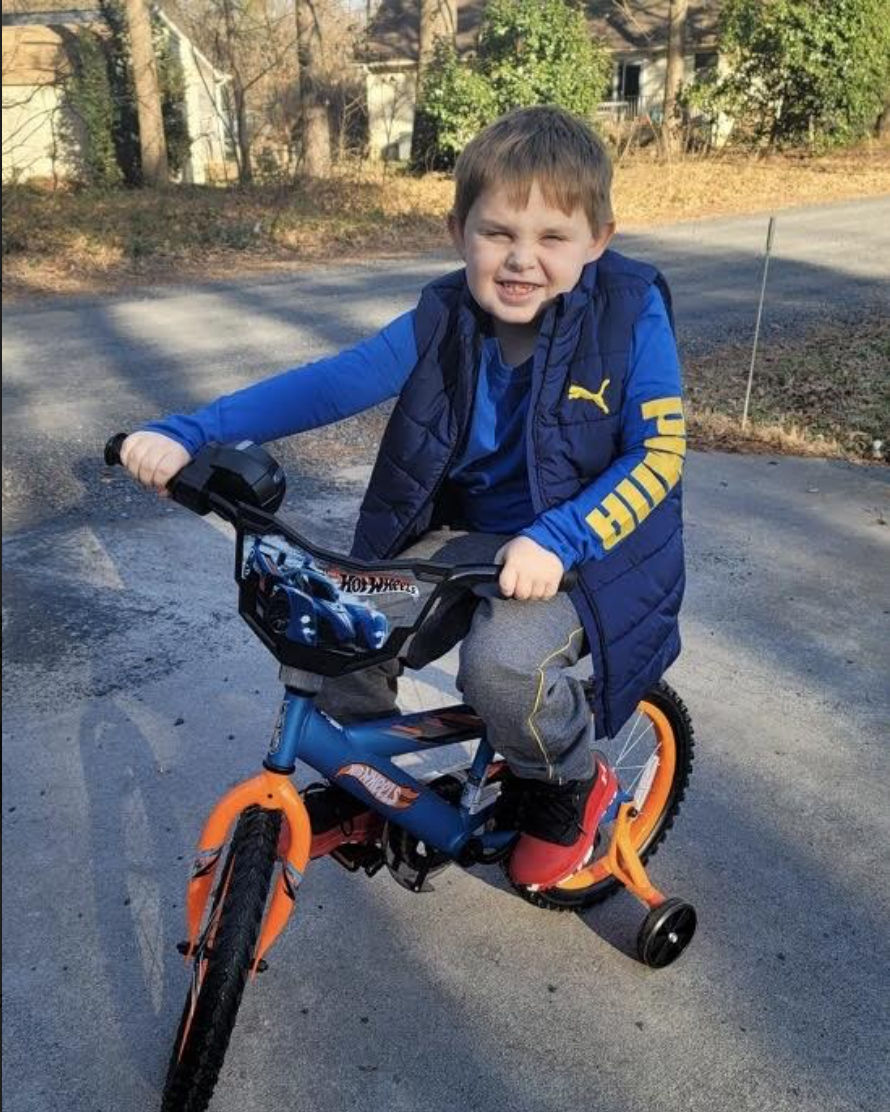 Robert Dutcher picked a sporty bike for his choice in the December giveaway done by River Gum of Colonial Beach. 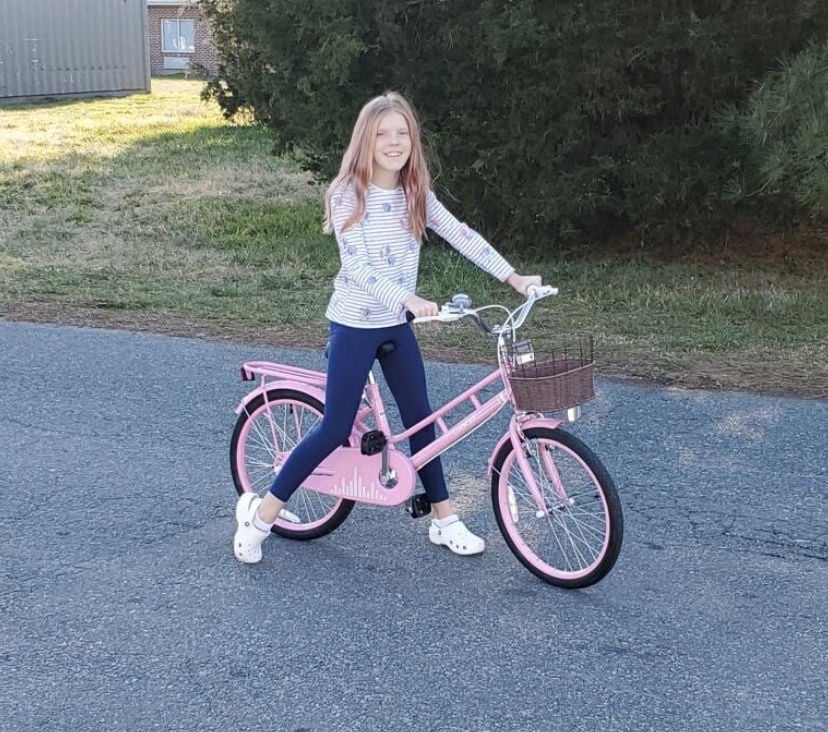 McKenzie Phillips went with a new pink ride in her choice of a bike. 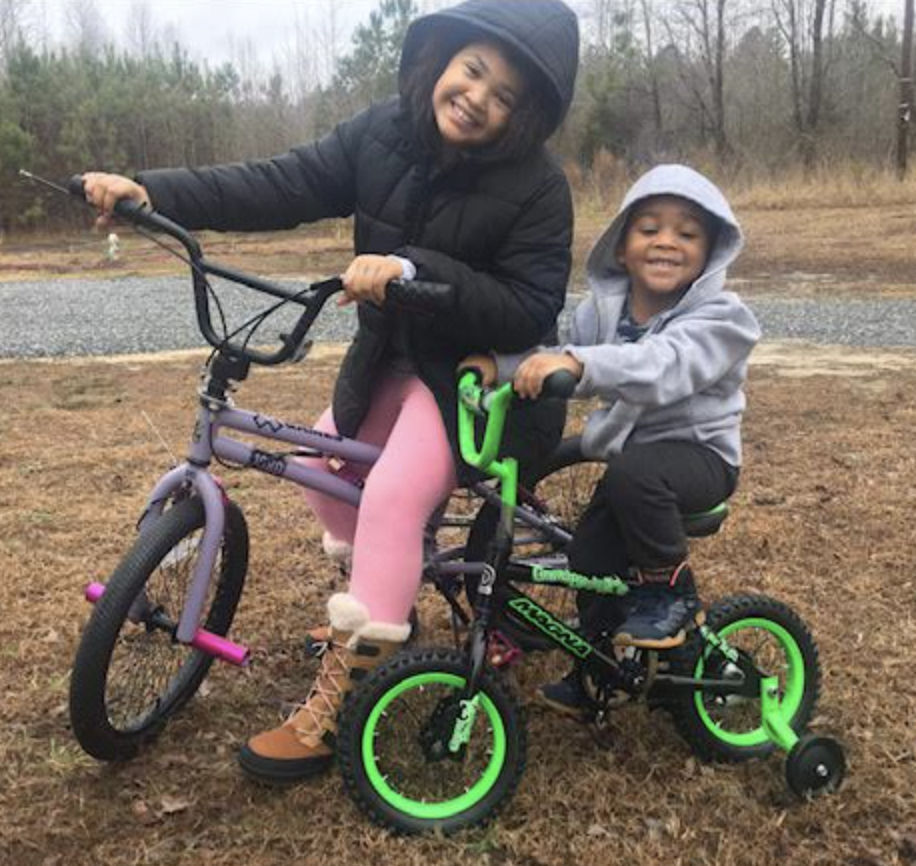 Kailyn Lewis and Kingston Pollard chose their own unique looking bicycles as a part of special giveaway in Colonial Beach.

Before we leave the holiday season behind, there’s a story of selfless giving and caring I want to share.

Dozens of youngsters in Colonial Beach got to pick out their own brand-new bicycles in December. It happened courtesy of the owner of the River Gym of Colonial Beach, Bobbi Adamson, who was moved to distribute the bikes to boost the youngsters’ activity and health.

Adamson, who has had a weekend home in Colonial Beach for 15 years or so, opened the gym on Washington Avenue in 2013. She typically buys a new piece of equipment in December for the gym and weight-loss center.

“But this year I decided to take the money normally used for that and give away 30 bikes in 30 days to children who live in Colonial Beach,” said Adamson.

She had heard from parents and others in town that many youngsters had lost opportunities for exercise during the pandemic and were putting on weight.

“I had a policy before COVID of letting youngsters come in for free in afternoons at the gym, and had to stop that because of COVID,” she said. “And they lost the exercise they were getting at school, and we had parks and exercise areas closed for a long stretch here.”

To do something about that, Adamson purchased 30 bicycles for 30 Colonial Beach youngsters 18 and under.

She asked Colonial Beach youth interested in getting a new bicycle to submit their names, which went into a hat. Then, each day in December, Adamson and the folks at the River Gym would pick out a name to select a bike winner.

The twist was how she handled picking and purchasing each bicycle. She contacted each winner and told them they could order the bike of their choice online from a few different sites.

Adamson said she loved seeing which bicycles the youngsters picked out, each getting the color, style and type of bike they wanted. Because bicycles have become hard to find during the pandemic, some of the recipients have had to wait a bit for orders to be filled.

“I learned things about bikes I never knew,” Adamson said. “Like the fact that you can now get lights that go on the wheels of the bike to light it up. Lots of the kids who won bikes got those.”

She said the effort wasn’t aimed at getting bicycles to needy youngsters, because she was concerned about all the children who weren’t getting exercise.

“But we heard from some of the parents that they were thankful because the bicycle and other things the children got were going to be the only thing under the Christmas tree this year,” said Adamson. “A lot of families are hurting because of COVID.”

One recipient might have put the biggest smiles on faces of everyone at the River Gym.

“Every day when we’d pick a name, there was one particular girl we hoped would win, because she’d had the bike she loved to ride stolen,” said Adamson. “We knew she’d been crushed by that, so we were happy to see her name picked. She got a bike and we threw in the lock for free.”

Adamson said she was thrilled to see donations come in once word of the bike giveaway spread.

“Because of those, we were actually able to give away 44 bikes instead of 30,” she said, noting that it was thrilling to be able to draw five names from the hat on Christmas Day. “The only sad part was that we had many more children ask for bikes than we could provide—70 or so we couldn’t get bikes to.”

But because she and others involved so enjoyed the bike raffle and giveaway, she said it may well be something she and the business do again.

“It was so much fun, and exciting telling the children who had names drawn that they’d won,” she said. “One young man spent nearly 24 hours making his pick. It really made December special for us.”

RICHMOND—Busch Gardens Williamsburg is keeping its gates open during the winter for the first time since it opened 45 years ago, park officials said.

Robert Dutcher picked a sporty bike for his choice in the December giveaway done by River Gum of Colonial Beach.

McKenzie Phillips went with a new pink ride in her choice of a bike.

Kailyn Lewis and Kingston Pollard chose their own unique looking bicycles as a part of special giveaway in Colonial Beach.