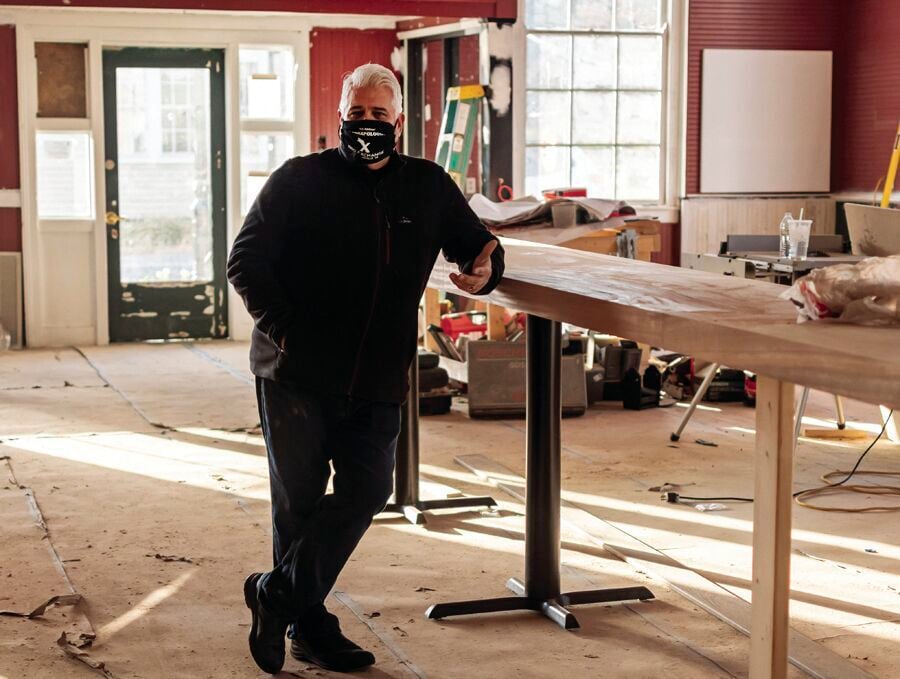 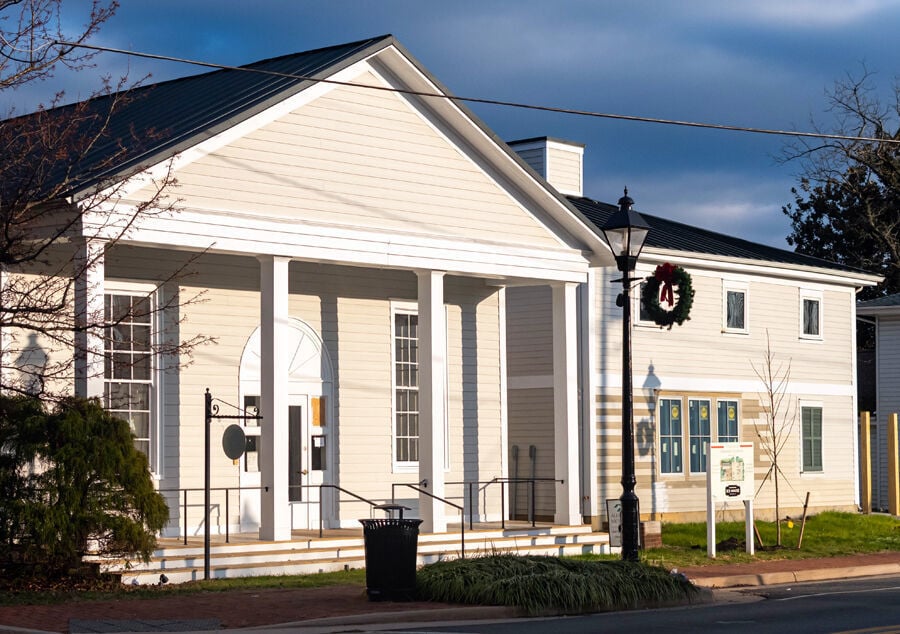 Historic Memorial Hall in Gordonsville, more than 100 years old, is being converted into a brewery and restaurant.

Construction work continues on historic Memorial Hall on Main Street in Gordonsville, which is being transformed into Champion Ice House. The popular Champion Brewing Company, whose flagship location is just south of Charlottesville’s downtown mall, is partnering with Craig Hartman of BBQ Exchange to create a new venture at the corner of Main and King streets in Gordonsville. The Ice House is expected to open in the spring.

Champion, which celebrated its eighth anniversary this December, is overseeing the beer operation side of the Ice House. After owner Hunter Smith decided to partner with Stony Point Development Group from Charlottesville, he approached Hartman about heading up the food side of the brewery. Hartman is focused on Southern fried chicken as the centerpiece of the Ice House’s menu and will be offering various appetizers and small plates as well.

Hartman has years of experience as a chef and pitmaster. He has run the BBQ Exchange restaurant in Gordonsville since 2010. Together with his wife, Donna, Hartman also runs Exchange Events & Catering and The Exchange Café at James Madison’s Montpelier. Before opening an authentic barbecue restaurant in Gordonsville, Hartman was the executive chef at Keswick Hall and the Clifton Inn.

According to an architectural history document from Stony Point Development Group, Memorial Hall was built between 1906 and 1910 and initially served as a civic auditorium for local citizens. On a recent visit, Hartman was quick to point out the film projector room just inside the building above its main entrance. Designed in a simplified Classical Revival style, Memorial Hall was constructed by the Maplewood Memorial Association. The group was formed to identify and care for Civil War graves near Gordonsville.

Despite Memorial Hall’s deep roots in Central Virginia, Smith was inspired by a different state’s past in coming up with the Champion Ice House concept.

“It was kind of perfect timing,” Smith said. “We’ve got some friends in Texas who described how much fun the ice house concept is, and it made us think how cool an outdoor gathering space would be, especially in a destination like Gordonsville.”

Texas ice houses are a long and storied tradition. Dating back to as early as the 1800s, the structures were used to store ice that would be delivered to homes. Eventually, ice house owners began to sell cold beer and other basic food items. The iconic 7-Eleven convenience stores, which started operating in Dallas in 1927, originated from ice house stores across rural Texas.

Once Smith and Stony Point had agreed on the plans for Memorial Hall, Smith said choosing Hartman to partner with was a no-brainer.

“Craig and I have been mutual admirers of each other’s products for a long time,” Smith said. “I think it’s about as good a collaboration as we could hope for. It’s super exciting.”

In 2008, Paul Manning, the chairman and CEO of PBM Capital, purchased Memorial Hall and a number of neighboring buildings. Manning turned those properties into an office campus for his baby food manufacturing company, PBM Products. In 2010, PBM Products was sold to pharmaceutical company Perrigo. By 2014, PBM Products, now Perrigo Nutritionals, moved from Gordonsville to Charlottesville. Manning retained ownership of the buildings they left behind.

“Stony Point Development believed that a chef-driven brewery concept would make a perfect fit for historic Main Street in Gordonsville,” said Jodi Mills, director of marketing and public relations at Stony Point. “In collaboration with Paul Manning, we homed in on Memorial Hall as the ideal location due to the existing building’s character, size and ample parking.”

Business owners in downtown Gordonsville view the addition of Champion’s Ice House as a positive development that likely will bring in more tourists and much-needed revenue heading into yet another uncertain economic year.

“There’s been a lot of damage due to the disease,” said Dr. Sunnie Capelle, owner of The Nathaniel Inn on Main Street. “Stores have really struggled with revenue, especially early on in the spring.”

Anthony Herring, owner of Well Hung Vineyard Restaurant on the southern end of Gordonsville’s downtown, is optimistic that places like his establishment and the Ice House can benefit from each other.

“I can see people going to Ice House and having fried chicken and a beer but also walking up to Well Hung Vineyard and having a glass of wine and a dessert,” Herring said. “So, I don’t see this as a competition whatsoever.”

The downtown stretch of Gordonsville along Main Street is known for its walkability and accessible shops, something that has helped the town stay busy even during COVID-19 restrictions.

“During the summer we had a lot of travelers that found Gordonsville to be a very safe place,” said Beate Casati, owner of Cavallo Gallery.

Capelle, Herring and Casati formed an LLC called Main Street Events at the beginning of 2020 before the pandemic hit and began a First Fridays event series in the summer. The group has hosted an Independence Day celebration and a fall festival. Both events were held with virus safety precautions in place.

Herring said the group, along with Gordonsville town government and other members of the community, are hopeful the Ice House can provide a spark to get business in Gordonsville booming again.

“I haven’t talked to anyone who wasn’t looking forward to Champion opening in Gordonsville,” Capelle said. “A merchant, citizen or tourist alike.”

Debbie Kendall, Gordonsville’s town manager, said she looks forward to smart growth and ways to bring in more travelers to the area.

“Our town council very much wants Gordonsville to be a destination,” Kendall said. “Every day, thousands of people drive through our town—we want them to have reasons to stop. Slowly and surely, our downtown is filling in with establishments that give people a reason to come to town. Champion Ice House will be a wonderful addition to what Gordonsville has to offer, and it will carry on the tradition of Memorial Hall as a gathering place for the community.”

Construction on the Ice House began in February 2020 and it was slated to open in fall 2020. Hartman said the team wanted to wait until the spring for warmer weather and in hopes that COVID-19 will be under better control. He explained that the building renovation process has run into relatively few setbacks.

“It’s been pretty seamless,” Hartman said. “The only roadblock that we had was some issues with the foundation. It needed to literally be rebuilt. That’s really it. It’s a good building.”

The venture will create 24 new jobs and purchase all of its industrial hemp from Virginia growers, worth nearly $5 million in payments to the farmers over the next three years.

Historic Memorial Hall in Gordonsville, more than 100 years old, is being converted into a brewery and restaurant.