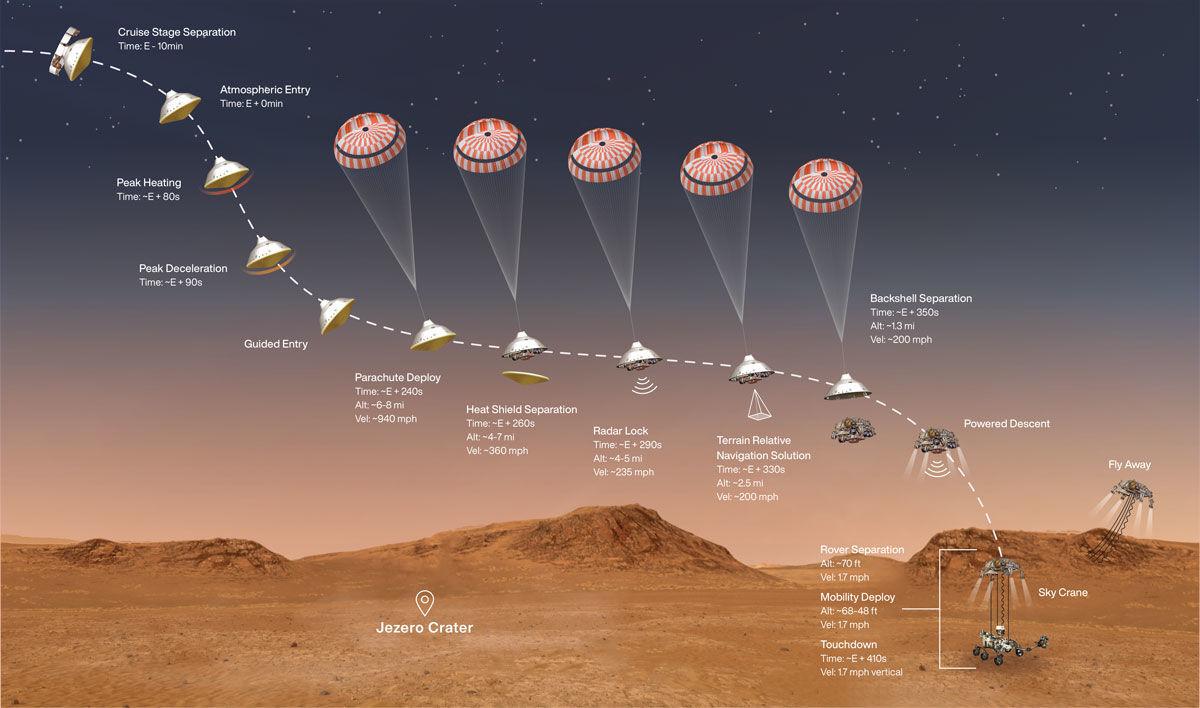 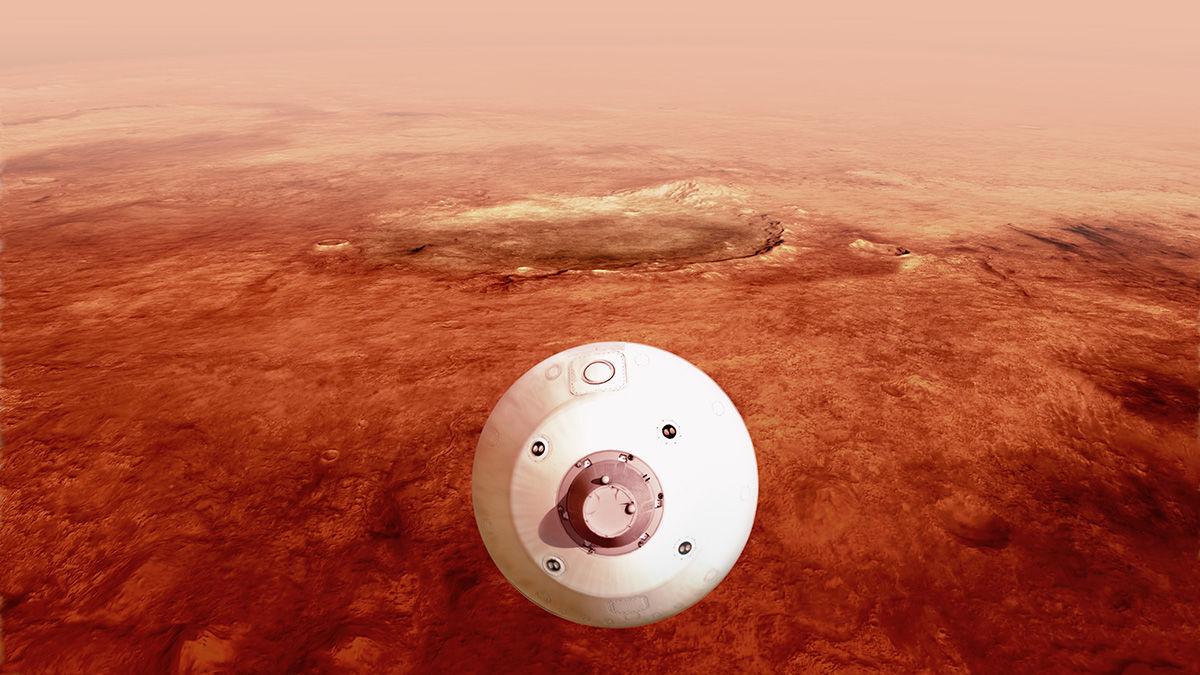 Mars 2020’s aeroshell, containing the Perseverance rover, tracks toward the surface of Mars. 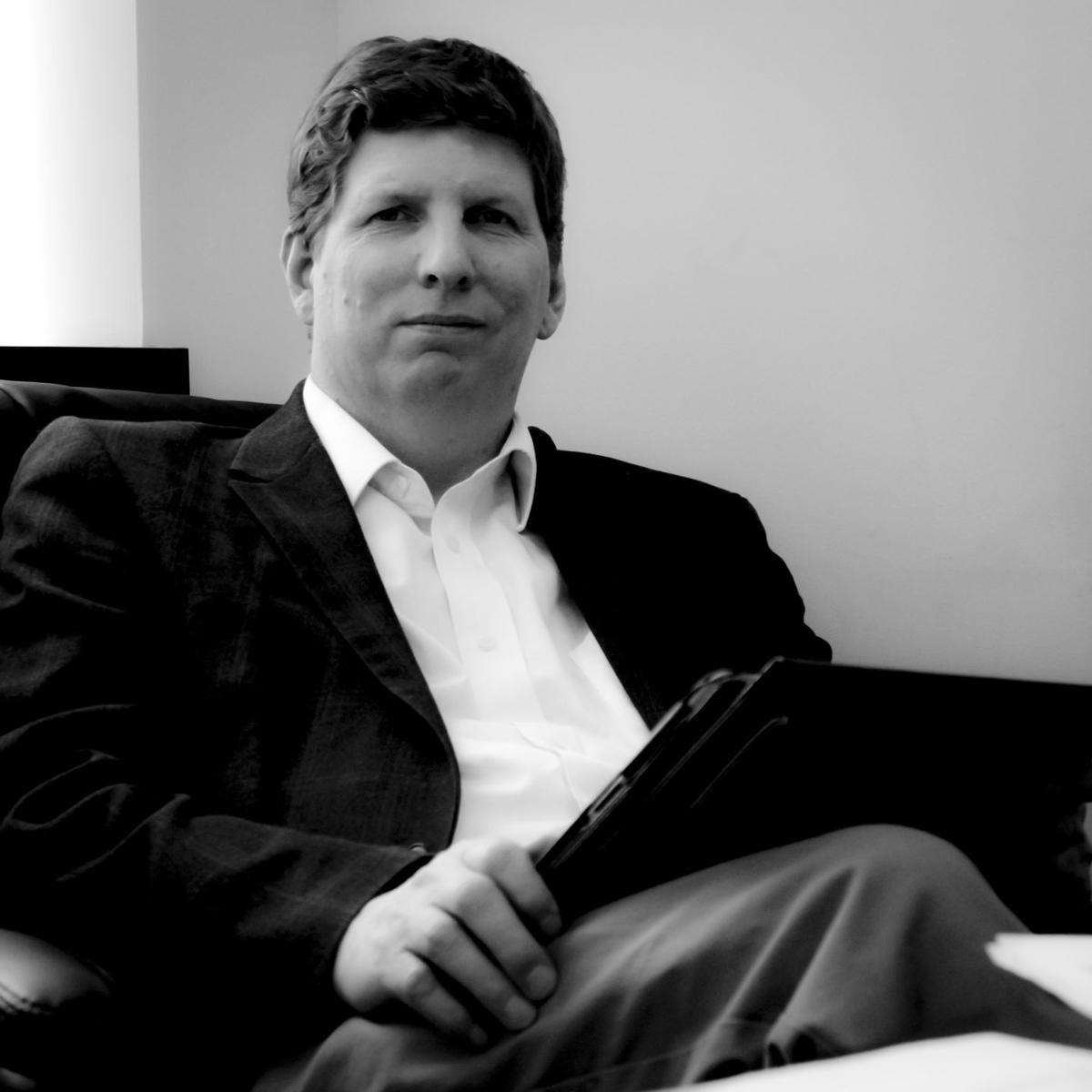 Stafford County resident Chris Carberry is among those paying close attention as NASA’s Mars 2020 spacecraft gets ready to land on the red planet.

Touch down is scheduled for 3:55 p.m. Thursday, marking the eighth time the Martian surface has been visited by a NASA spacecraft. Since leaving Cape Canaveral, Fla. on July 31, Mars 2020 has traveled about 300,000,000 miles.

“The mission is important in advancing the goal of getting humans there in the 2030s,” said Carberry, chief executive officer of Explore Mars Inc., a nonprofit that helps educate the public about the planet. “This is the most impressive lander that NASA has ever sent to Mars, with direct connections to human missions.”

Mars 2020 is scheduled to land in the 28-mile-wide, carbonate-rich Jezero crater. NASA officials said carbonates from the planet will help researchers discover more about how Mars transitioned from having liquid water and a thicker atmosphere to being the freezing desert it is today.

“The possibility that the marginal carbonates formed in the lake environment was one of the most exciting features that led us to our Jezero landing site,” said Mars 2020 Deputy Project Scientist Ken Williford of NASA’s Jet Propulsion Laboratory in Pasadena, Calif. “Carbonate chemistry on an ancient lakeshore is a fantastic recipe for preserving records of ancient life and climate.”

This is the first NASA mission to Mars that will collect rocks and sediment using the Perseverance rover. The rover has thick, durable aluminum wheels covered with cleats for traction, along with curved titanium spokes for spring-like support. The rover includes a five-jointed robotic arm to gather the geologic samples from the surface of the planet.

“Another mission will come back, hopefully by the end of the decade, and collect those samples and bring them back to earth,” said Carberry.

A key objective during the Mars 2020 mission includes the search for signs of ancient microbial life, including characterizing the planet’s geology and past climate. Other tasks include an experiment to produce a small amount of oxygen using the carbon dioxide of the Martian atmosphere to help determine if human explorers could one day live off the resources found on the planet.

“We want to find ways to live off the land,” said Carberry. “There’s actually water on Mars, so if we can access that, we can use it to manufacture oxygen, as well as methane rocket fuel.”

The landing craft will also deploy Ingenuity, a small helicopter which will explore hard-to-reach locations, such as cliffsides and caves. Carberry said Ingenuity is essentially a drone that will work in tandem with future human explorers. He said it’s initial flight on Mars will be historic.

“It’s the first aircraft to be flown on any other planet but earth,” said Carberry. “When we someday have people on the surface of Mars, it’s going to be very helpful.”

NASA reports only about 50 percent of all previous Mars landing attempts have been successful, and the Jezero crater will present its own set of challenges, including steep cliffs, sand dunes, and boulder fields.

The Mars 2020 mission was announced by NASA on December 4, 2012. Mars 2020 was the third of three space missions sent to Mars during the launch window last July, along with space agencies from the United Arab Emirates and China. All of the missions are expected to arrive on Mars this month.

Carberry said the landing will be tricky.

NASA engineers call the final entry, descent and landing phase of the mission the “seven minutes of terror,” a period in which there are myriad ways to fail.

“So much has to go right,” said Carberry. “This is one of the most challenging endeavors that humanity has ever attempted. Hopefully, tomorrow’s successful.”

Live commentary of the Mars landing begins Thursday at 2:15 p.m. on NASA Television, which simulcasts on the internet. To learn more about the mission, visit mars.nasa.gov/mars2020 or ExploreMars.org.

Student Loan Deferrals Can Impact Your Credit: Here’s How

Student Loan Deferrals Can Impact Your Credit: Here’s How

An Extended Stay America hotel may be built off Fall Hill Avenue in Fredericksburg.

The oldest bank in the state—Burke & Herbert Bank, located in Northern Virginia—is taking steps to extend commercial services to the Frede…

WORK is hitting the final stretch on the Truslow Road bridge in Stafford County.

LYNNE RICHARDSON: It starts at the top

HAVE YOU ever been watched a football game when a fight broke out? Or when a player who just does his job by making a tackle hot-dogs after th…

Kings Dominion to hire more than 2,000 for seasonal jobs, holding virtual event to find them

Kings Dominion is hiring more than 2,000 seasonal employees for the coming 2021 season, and will host a Virtual Hiring Day event March 13.

Lee Enterprises, which owns The Free Lance-Star and more than 70 other newspapers across the country, is hosting a virtual Career Fair now thr…

New 'LOVE' signs now up at Stafford's breweries and winery

There's now more LOVE in Stafford County, that is if you’re measuring by LOVEworks signs.

Mars 2020’s aeroshell, containing the Perseverance rover, tracks toward the surface of Mars.