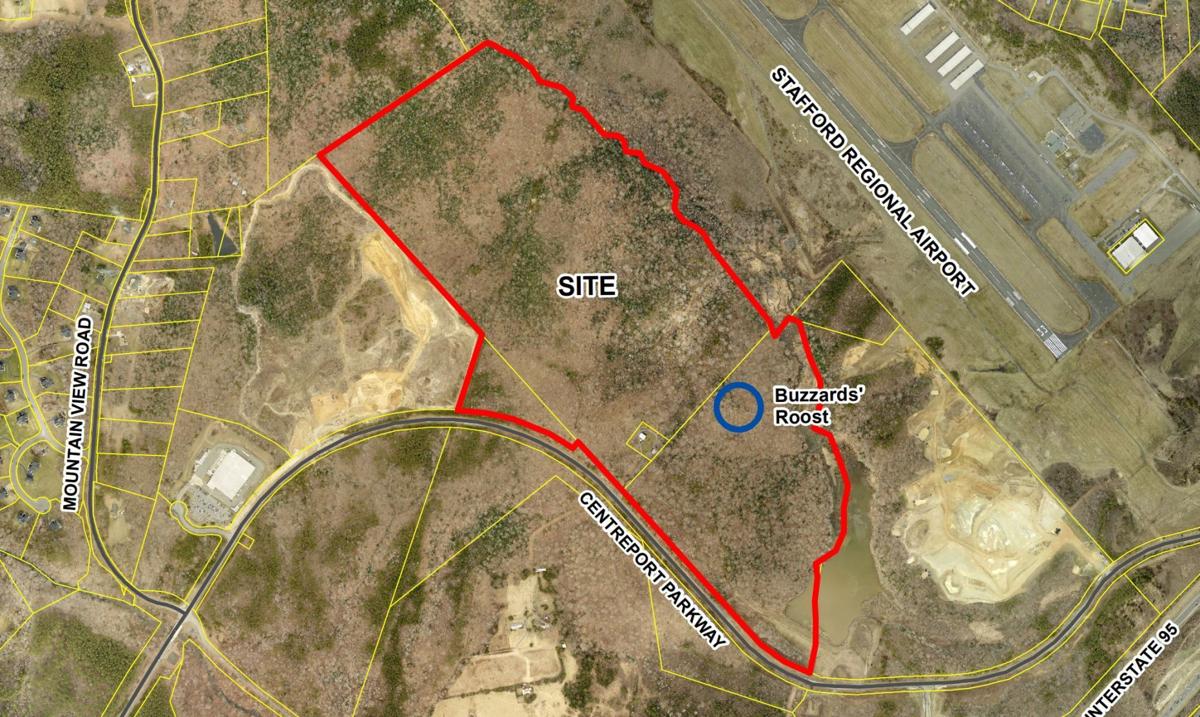 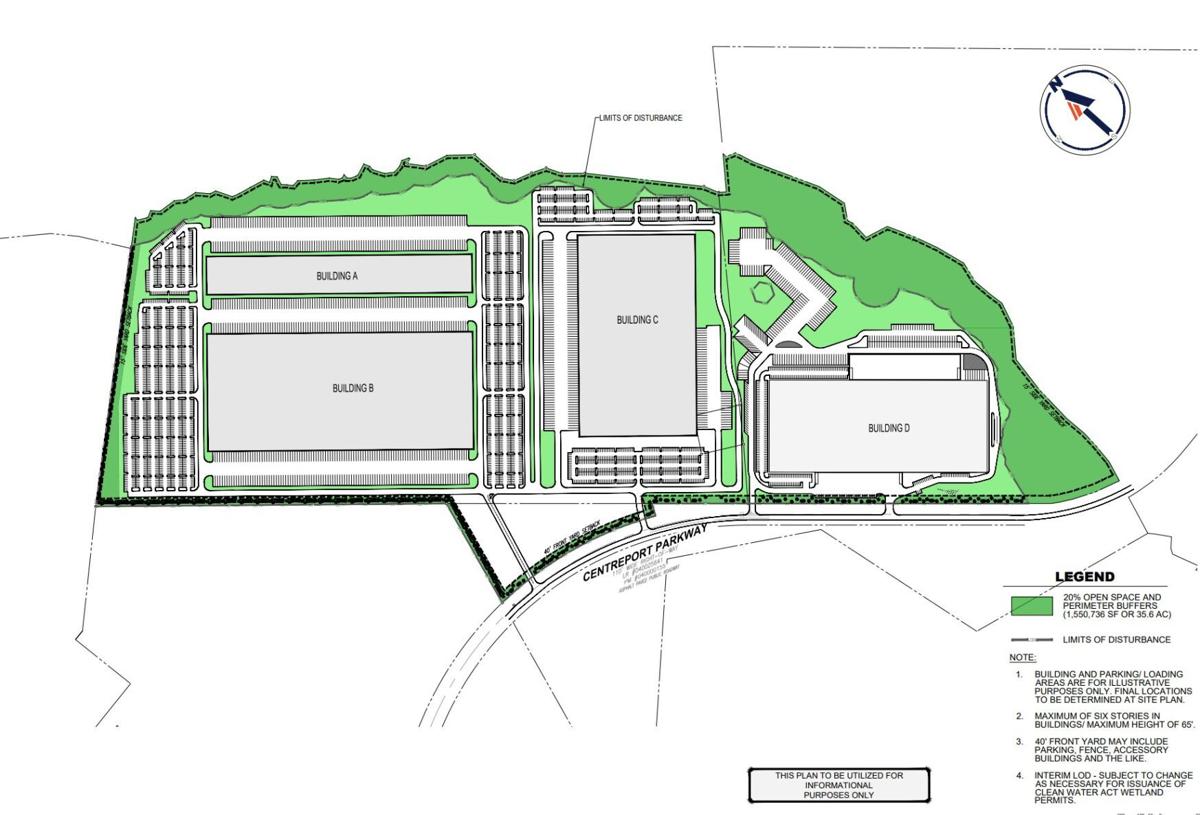 Artist rendering of a proposed 3 million-square-foot warehouse planned near the Stafford Regional Airport.

Stafford County supervisors have voted to rezone 178 wooded acres near the Stafford Regional Airport, paving the way for a sprawling, 3 million-square-foot warehouse complex.

“The grading plans are in, so they could start grading the site relatively soon,” said Mike Zuraf, principal planner for the county. “As far as the buildings go, we need site plans for that.”

The planned mega-warehouse facility is being developed by Peterson Cos., a property management firm based in Fairfax. Taylor Chess, president of the company, has not named any companies or businesses that might one day occupy the space, but he previously told supervisors the project could ultimately be “distribution, data [center], innovation or manufacturing.”

“We’re looking at all those opportunities,” said Chess.

Stafford Economic Development Director John Holden told supervisors Centreport Parkway has “long been envisioned and planned as a distribution and employment center.” The county has a nearly nonexistent Merchants Capital Tax rate of $.0001 per $100 of assessed value for wholesale distribution warehouses over 100,000 square feet and for retailers with over 200,000 square feet.

Holden said based on recent studies of the warehouse distribution market, if only half of the planned warehouse project near the county’s airport was built, about 660 new jobs would be created, along with about $850,000 in annual revenue garnered from real estate and business and personal property taxes associated with the project.

The rezoning was approved 6–1 at the board’s meeting last Wednesday, with Supervisor Crystal Vanuch voting no. She wants the developer to cover the cost of adding a traffic signal at the Mountain View Road/Centreport Parkway intersection.

The rezoning initially came up for a vote last month, but supervisors requested additional information from county staff on the proposed site, including traffic impacts on the Centreport Parkway interchange and the roadways that feed it.

Zuraf told supervisors late last month that a study commissioned by Peterson Cos. estimated the project could add over 7,000 cars and trucks each day to the Centreport Parkway area. He also said other businesses already approved to be built along the developing parkway corridor over the next several years could bring that number to more than 13,000 vehicles each day..

Last week, Zuraf told supervisors 75 percent of the car trips and 95 percent of the truck trips related to the new facility are estimated to be oriented toward Interstate 95.

“The remaining trips would go to the north, towards Ramoth Church Road and head either to the west or over to Route 1,” Zuraf said.

Supervisors had also previously raised concerns with the possible high numbers of trucks that might be added to the road network in and around the airport as a result of the proposed warehouse facility, as well as other new construction already planned or approved along the corridor. The update provided by Zuraf last week estimated that trucks would make up 13 percent of the morning commute and 6 percent of the evening rush hour.

“Many of the trips are resulting from employees driving their personal vehicles to and from work,” said Zuraf. “The site would add about 350 to 400 peak hour trips. … Only 25 to 50 of the trips would be attributed to truck traffic in the peak hour.”

To help counter the additional traffic, several roadway improvement projects have either been planned and funded or are in the pipeline as proffers from future builders of businesses along the Centerport Parkway corridor.

Some of the updates include lane and shoulder widening of both Mountain View and Ramoth Church roads to the north and west of the parkway, and the installation of a new traffic signal, along with turn lane improvements, at the Mountain View Road and Centerport Parkway intersection. Zuraf said all future improvements will be phased in over a number of years, including ultimately widening Centreport Parkway into a divided, multi-lane roadway someday, and upgrading the parkway’s interchange where it intersects with Interstate 95.

“We would generally see the area developing, overall, within the next 10 to 20 years, along with it, those projects are part of that,” said Zuraf.

Zuraf said long-term improvements for the area have long been part of the county’s comprehensive plan as the Berea Parkway section of a proposed Outer Connector.

“Right now, you have kind of the diamond-type interchange, so that’s planned to be improved, and also a full four-lane improvement from east to west in this alignment,” said Zuraf.

The Berea Parkway was to be the first leg of the north–west connector proposal in the 1990s. That plan, which failed to gain traction, had the connector running from the Centreport Parkway exit to U.S. 17, then connecting to State Route 3 at Gordon Road in Spotsylvania County, were today a Lidl grocery store is situated.

“There’s no near-term plans for [the Berea Parkway]. It’s still in our transportation plan,” said Zuraf. “In that regard, it’s still something that could occur.”

As expansion of land along the Centreport Parkway corridor continues to evolve over the next several years. Zuraf said county public works officials, along with the Virginia Department of Transportation, have started discussions to develop a detailed study of the area, which would factor in the ultimate build-out of the entire corridor.

The study would help identify future transportation needs in the area, as well as funding strategies for the large amount of work that is expected to occur in the future.

“It’s nothing that’s been approved yet,” Zuraf said. “We’re in the initial discussion.”

I’ve been thinking a bit about the importance of first impressions. Normally, we consider the impression someone makes visually. While this is…

The revenue from the tax district will help the county pay for  $64 million in road projects tied to the clinic agreement.

Extended unemployment benefits program to end in the state, affecting about 20,000 out-of-work Virginians

About 20,000 out-of-work Virginians who are still receiving extended unemployment benefits during the pandemic are going to see those benefits…

Artist rendering of a proposed 3 million-square-foot warehouse planned near the Stafford Regional Airport.