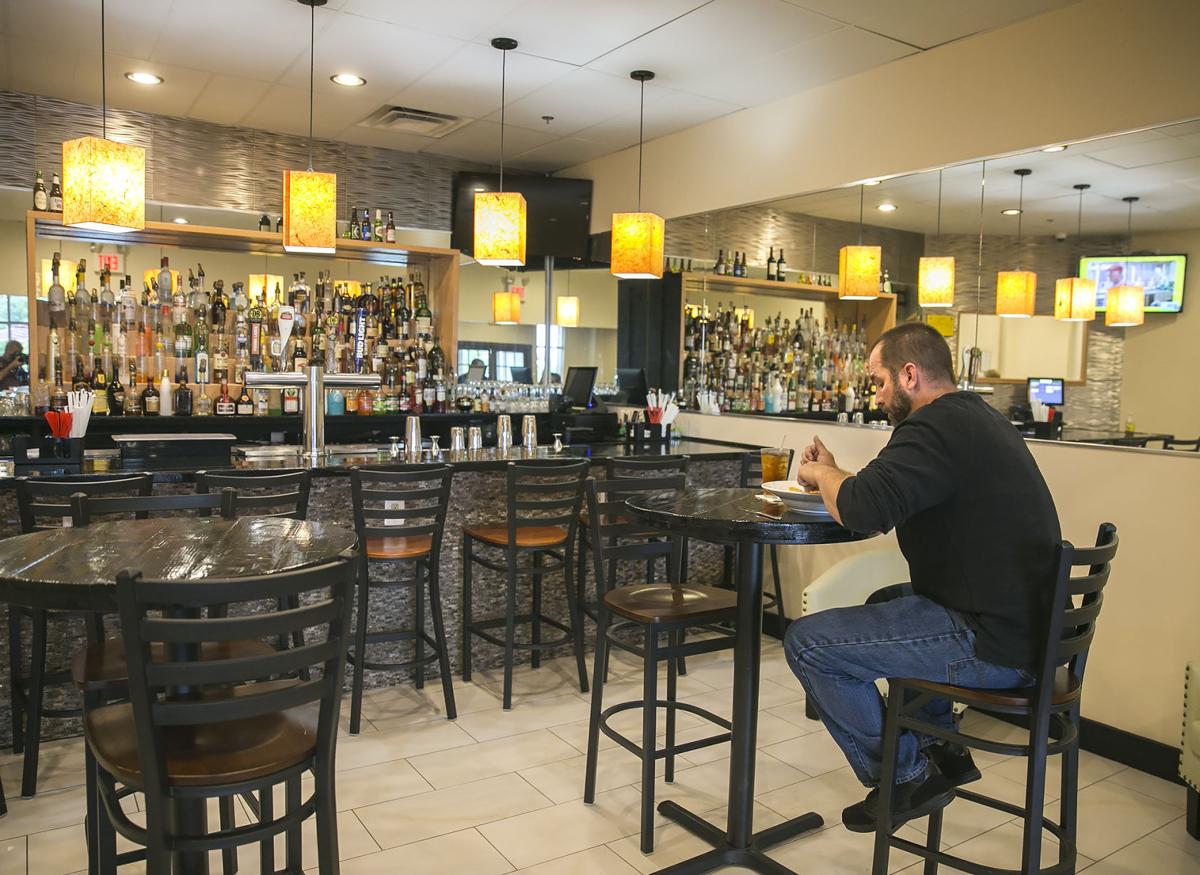 Michael Ferreira has lunch at Peeramidz Restaurant and Lounge in Stafford. The initial idea was for a cigar bar, but food has become an important ingredient. 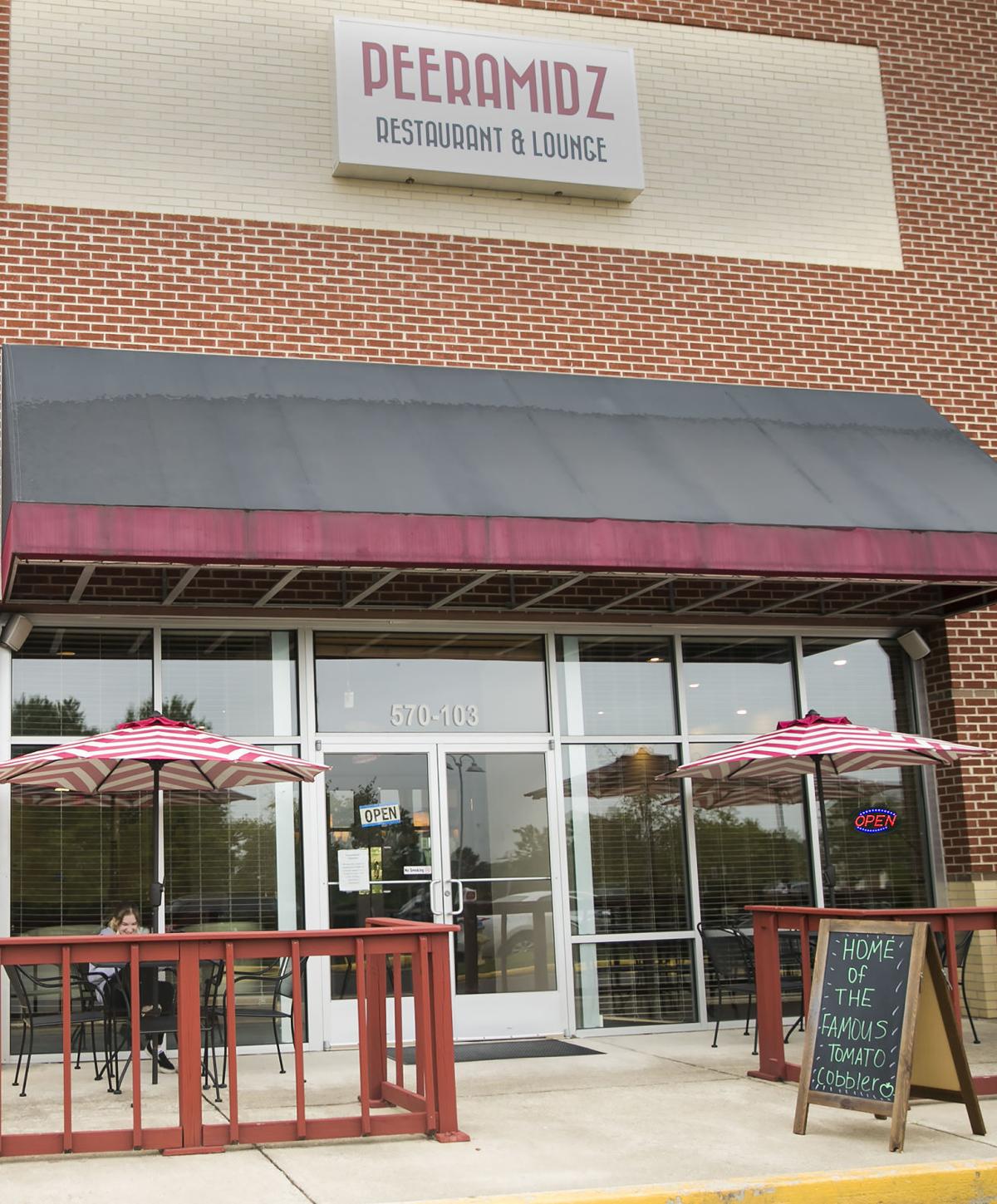 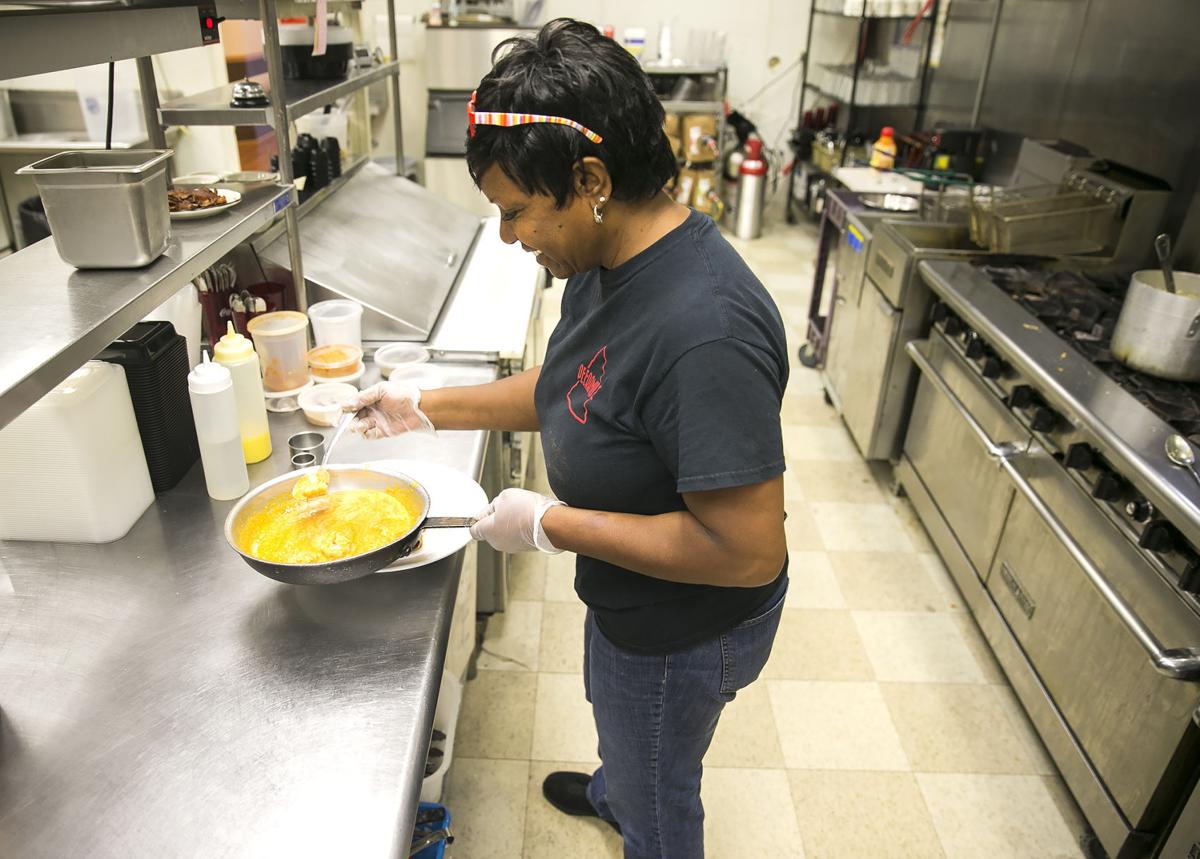 Janice Scott cooks up a lunch dish at her Peeramidz Restaurant and Lounge in southern Stafford.

Janice Scott’s plans to open a cigar lounge in Stafford County could have gone up in smoke when she applied for her business license.

She discovered that if she wanted customers to be able to sip alcoholic drinks while relaxing with a good cigar, she’d also have to offer them something to eat.

Scott, a program analyst for the federal government, wasn’t about to let that stop her. She took the county’s advice to open a restaurant and use part of the space for the cigar lounge. Peeramidz Restaurant & Lounge opened at 570 Celebrate Virginia Parkway last November with a menu that includes a tomato cobbler made from a secret recipe dating back more than 100 years.

The restaurant is “actually a collateral benefit to the cigar lounge, which I hope to open before the year ends,” she said.

Scott has been a cigar fan for 21 years, and was getting tired of driving to Washington or Maryland to patronize a cigar lounge. She and some girlfriends were sitting on the deck of one such establishment to enjoy a smoke and a drink when inspiration struck.

“I said, ‘Look at us. We should open a cigar lounge,’ ” she said. “I wanted a place where I could get a cigar, have a cocktail and something to eat.”

Scott decided to pursue that pipe dream, and then expanded on it when she learned she’d be required to serve food if she wanted to make the cigar lounge a reality.

She said she was on her way home from visiting tobacco fields in Cuba when she came up with the name for the restaurant. She’d passed some pictures of pyramids, which struck a chord because she’s a member of Delta Sigma Theta, a Black sorority whose symbol is the pyramid.

“I thought, I can play with that,” Scott said.

She changed the first three letters to peer, because the restaurant would be a place to hang out with peers, and the last three to midz because she and her sorority sisters put their thumbs and forefingers together to form a triangle, or pyramid shape, that they call a mids.

“I have had lots of sorority members come by,” she said. “My Fredericksburg chapter had their holiday party here back in December. I have some come from Woodbridge. They come and support me.”

Scott once worked for a brother who had a restaurant in Mobile, Ala., and described herself as an avid home cook. She decided to develop Peeramidz’s menu using a number of her own recipes and ones handed down in her family.

“I tried hard to fight it being a ‘soul food’ restaurant. As I was tweaking recipes, I was saying to myself, perhaps I could call it sophisticated southern cuisine,” she said. “Thanks to the community, it has morphed into a soul food restaurant.”

Peeramidz’s menu includes two versions of shrimp and grits, for example. One is traditional while the other is served over cheesy fried grits. Both are served with a paprika sauce. Fried catfish comes with red beans and rice, and the Plate for the Soul entrée includes deep-fried chicken, yams, collard greens, mac ‘n’ cheese and cornbread. Burgers, crab cakes and two kinds of steak are also available.

Then there’s the tomato cobbler, which is one of the two desserts available. Scott said that she likes to ask customers what they think of it so she can see their reaction. “Wow! That’s delicious,” was what a group of men kept repeating as they were filmed for a short video posted on the restaurant’s Facebook page.

“It has a homemade crust. People are trying it and buying it,” said Scott, who makes each batch herself and isn’t about to divulge the recipe. “They’re switching from peach cobbler.”

Like many restaurants, Peeramidz struggled when COVID-19 restrictions went into place. Customers from the nearby Celebrate by Del Webb retirement community started staying home, and some employees left so they could collect unemployment.

“It impacted us pretty hard,” Scott said. “We remained open and started curbside service, and there were a few times when we delivered to the 55 and over Dell Webb community. We’re not delivering ourselves now. We don’t have the resources. But we are on Grubhub and DoorDash.”

Things began looking up last month when Peeramidz joined 24 other restaurants and food trucks for the first Fredericksburg Black Restaurant Week. The event was so successful that another is planned for February.

“People didn’t even know we were here. Since then, we’ve had repeat customers. It was fantastic,” said Scott. “I was really glad that we were invited.”

Dahlgren's warfare center brings 40 percent of force back from teleworking

In the beginning of the pandemic, only 8% of workers at the Naval Surface Warfare Center in Dahlgren were on the base.

Spotsylvania County Public Schools has been named a Forbes 2020 Best Employer, ranking 37 out of 100 employers selected in Virginia.

Heather Hall has been named the new director of King George County’s department of community development.

A private fitness center has announced the opening of a studio in the new Liberty Place development in downtown Fredericksburg.

Michael Ferreira has lunch at Peeramidz Restaurant and Lounge in Stafford. The initial idea was for a cigar bar, but food has become an important ingredient.

Janice Scott cooks up a lunch dish at her Peeramidz Restaurant and Lounge in southern Stafford.