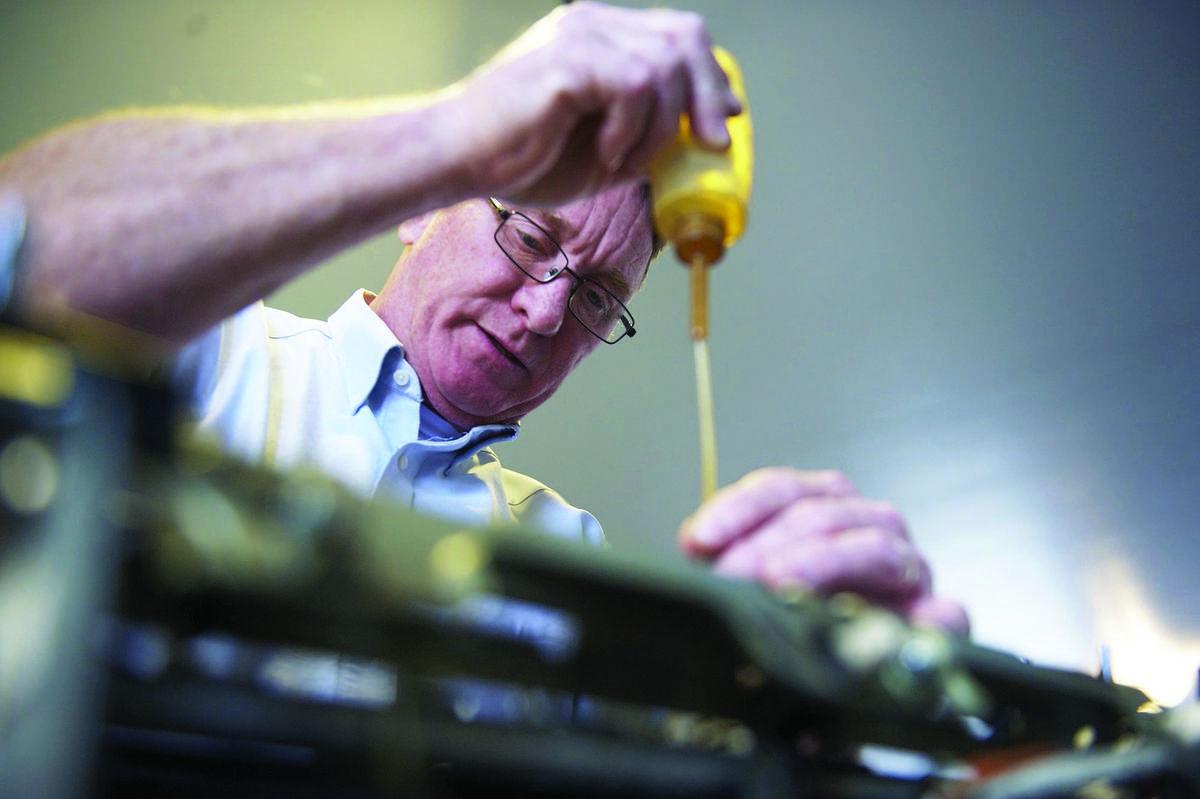 Ronnie Stevenson, the area’s only typewriter repairman, works on a machine at his office in Goldvein on Friday. 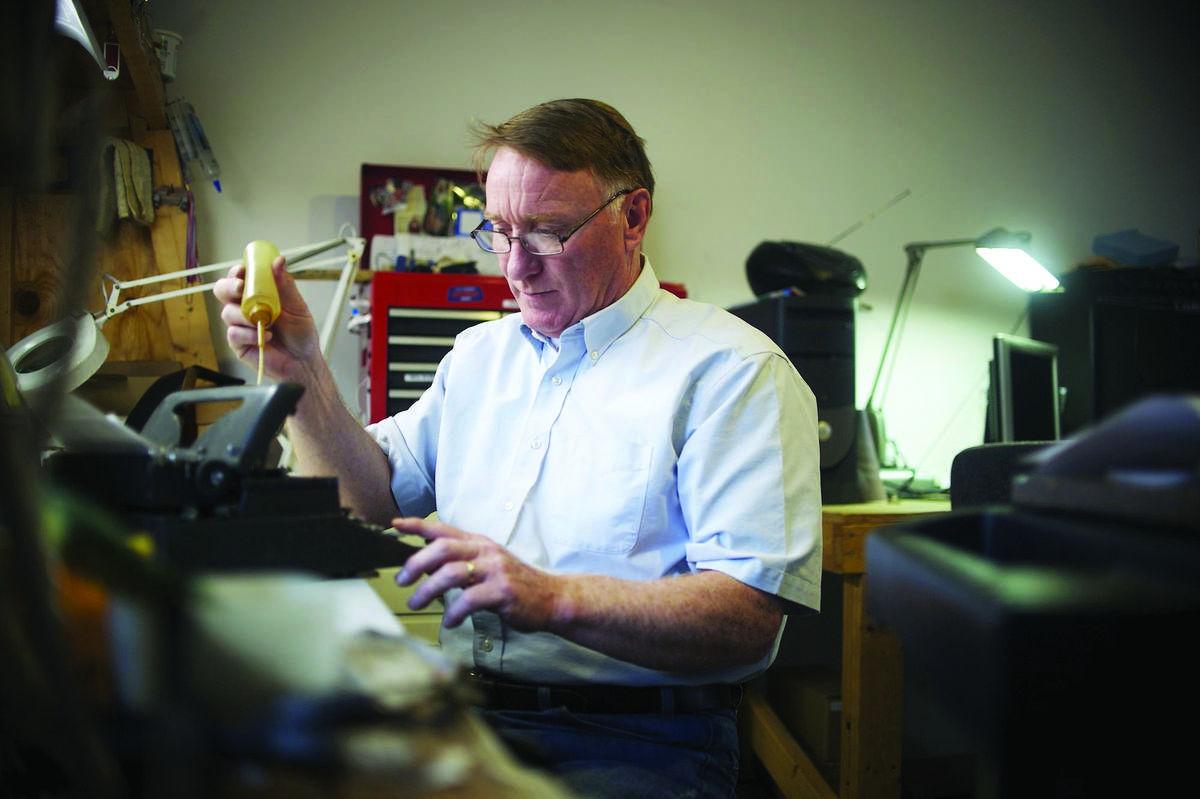 Ronnie Stevenson repairs a typewriter once used by a wartime doctor. He often uses parts that he salvages from old machines.

Stevenson is the last typewriter repairman left in the Fredericksburg region. Most of the machines he has are used for scrap parts.

But there are two typewriters he won’t dismantle or sell for any price: a Royal carried by a doctor on the battlefields of World War II and a 1951 Hermes baby that’s as rare as it is compact.

There’s something about the manual typewriter that hearkens back to a simpler time, he said. And young people agree with him.

Manual typewriters are becoming popular again with 20- and 30-somethings, who appreciate the crescendo of keys thwacking paper as a more pure form of technology and for its nostalgic appeal.

The 61-year-old Stevenson co-owns Stevenson Repair Service in Fauquier County with wife Christa Stevenson. Together, they scour the Internet for people giving away or selling typewriters to use for parts.

In the last year or so, typewriter work has picked up. He repaired a Smith–Corona manual machine recently for a woman in Reston who then sold it for more than $100.

“I couldn’t believe she could get that for the machine,” he said.

While some offices still use typewriters to ensure multiple copies created at the same time, such as lawyers, banks and real estate companies, he said individuals are getting in on typewriters because the technology is incorruptible.

“You can type a letter and send or fax it and no one else is going to read it,” he said.

Following the 2014 NSA leaks, governments around the world, namely Germany and Russia, talked about returning to unhackable typewriters.

And in 2009, the New York Police Department spent nearly $1 million on manual and electric typewriters, according to news reports.

Chris Austin, a locally based actor and online antiques dealer, understands the allure of the typewriter, as well. His Etsy store RUINshop features a vintage blue Smith–Corona, as well as other typewriter-themed items such as an antique ribbon box.

“This is the second one I’ve sold [in the month since opening the shop],” he said. “They’re fascinating, but hard to ship.”

Austin also has a company that sells refinished vintage, mid-century modern chairs. But branching into selling a wide range of items online has helped him see why people love vintage. He sells items people can use, including typewriters.

“Things aren’t made now like they used to be,” he said. “Back in the day, these cost more. They were investment pieces. When companies do make items like them today, it’s more cost effective and not made as well.”

Sales like those mean that Stevenson now repairs three or four typewriters per week, which he said is mostly just showing the machines “a little TLC” and a lot of problem solving.

Without typing and proper repair being taught, people forget to oil the more than 2,000 moving parts. He also has to replace ribbons or make his own typewriter ribbons out of calculator ribbons. He’s even gone to craft stores to find letters of the alphabet in different formats to replace key tops.

Stevenson started working on typewriter repair in 1973, at a company called Discount Typewriters in Alexandria. He worked for other companies before starting his own business in Fauquier in 1991.

Business dropped off in 2001 as major typewriter brands stopped producing machines, such as Crestar and IBM.

He has rare typewriters to use for parts or sell as well, such as an Oliver No. 9, the “winged typewriters” whose typebars sit above the machine and fan like wings to type. He also has an Underwood No. 3, first developed in 1900.

He keeps electric typewriters, too, for parts, such as a Smith–Corona Spell Right SC–110, which Stevenson still remembers being a treasured gift for students going off to college in the 1980s.

He gets calls from a wide region in the mid-Atlantic since he is the only authorized Brother repairman, and Swintec sends all of their repair requests to him.

Stevenson travels as far north as Washington and as far south as Richmond for repairs. He regularly stops in Fredericksburg, where typewriter repair services Better Business and Mitchell’s closed years ago, and in Charlottesville.

Local antiques dealers are also noticing the increase in demand for typewriters. Mark Repass, owner of Blue Shark Antiques in downtown Fredericksburg, said his store gets one in every couple of months and it’s almost always a young person who buys it.

“They’re somewhat nostalgic,” he said. “They’ve got all of the technology, but like that manual feel.”

Repass currently had an Underwood typewriter for sale. He scours auctions and estate sales for them and for old cameras, which he said are of similar interest to a younger demographic.

At Hooked in downtown Fredericksburg, owners Mike and Lauren Skinner depend on that demographic for their business.

“With what we offer, we’re really a lifestyle store,” Lauren Skinner said.

They refurbish the cameras in house, and said while some of their younger shoppers want the unique experience of using film over a digital camera, a lot are following fads.

They have a wide selection of refurbished Polaroid cameras and film, which only recently became available again.

“When Kodak stopped making the film is when everyone wanted it again,” Mike Skinner said.

He added, “What shooting with film gives people is a way to reconcile now with great pastimes. It’s about bringing back a simpler way of life.”

WITHOUT TYPING AND PROPER REPAIR BEING TAUGHT, PEOPLE FORGET TO OIL THE MORE THAN 2,000 MOVING PARTS. HE ALSO HAS TO REPLACE RIBBONS OR MAKE HIS OWN TYPEWRITER RIBBONS OUT OF CALCULATOR RIBBONS.

McDonald's Teams Up With Biden Admin To Promote COVID Vaccinations

CLEMMONS, N.C. (AP) — The nation's largest fuel pipeline restarted operations Wednesday, days after it was forced to shut down by a gang of hackers.

How to fill in your financial blind spots

Also, check out more of the week's best financial tips from experts at NerdWallet, Forbes and the Motley Fool.

The Best Cannabis Stocks Of 2021

With the growing acceptance of cannabis among American consumers and their elected representatives, this edgy asset class offers your portfolio an excellent source of growth. According to data from Leafy, an online marijuana marketplace, legal U.S. cannabis sales—medicinal and recreational—increased 71% in 2020, to a total of $18.3 billion. To help you choose the best […]

Is the S&P 500 All You Need to Retire a Millionaire?

This one investment could help you earn more than you may think.

Ronnie Stevenson, the area’s only typewriter repairman, works on a machine at his office in Goldvein on Friday.

Ronnie Stevenson repairs a typewriter once used by a wartime doctor. He often uses parts that he salvages from old machines.