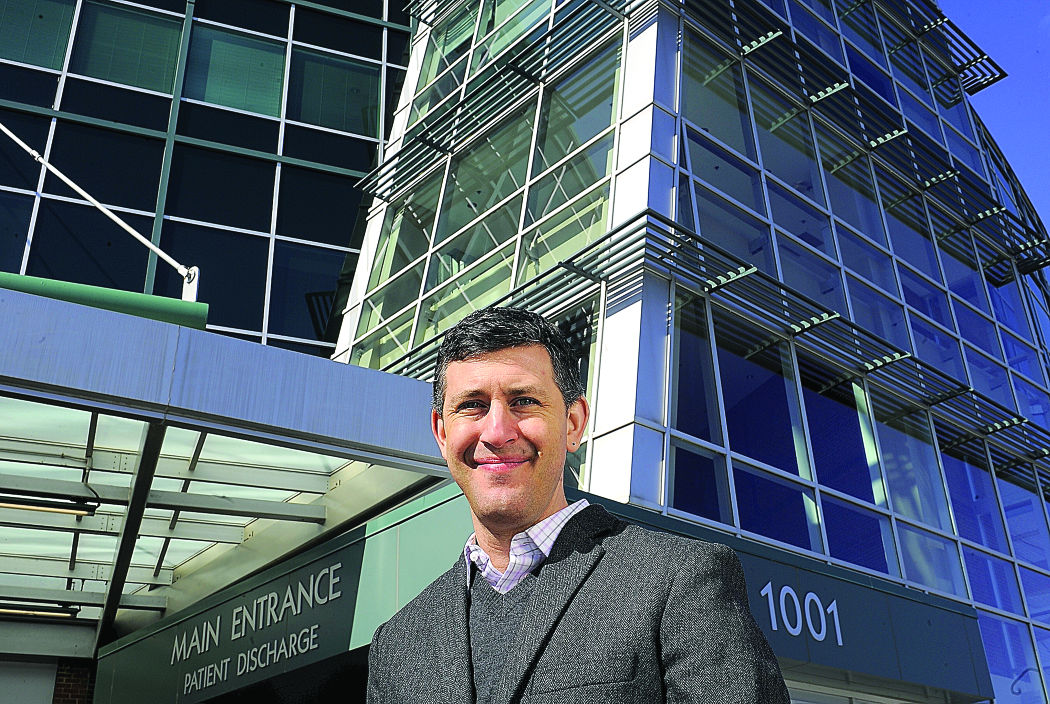 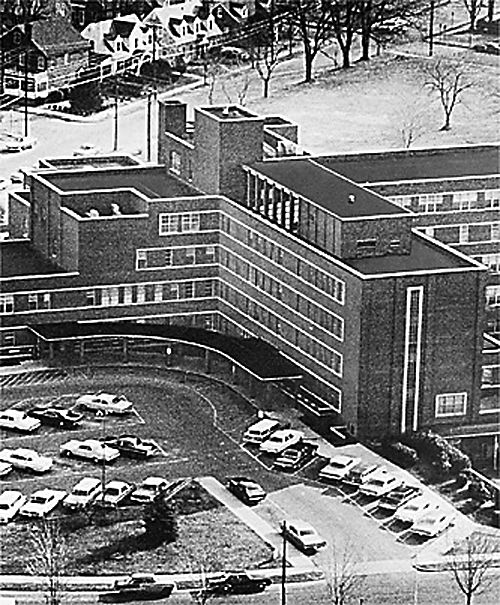 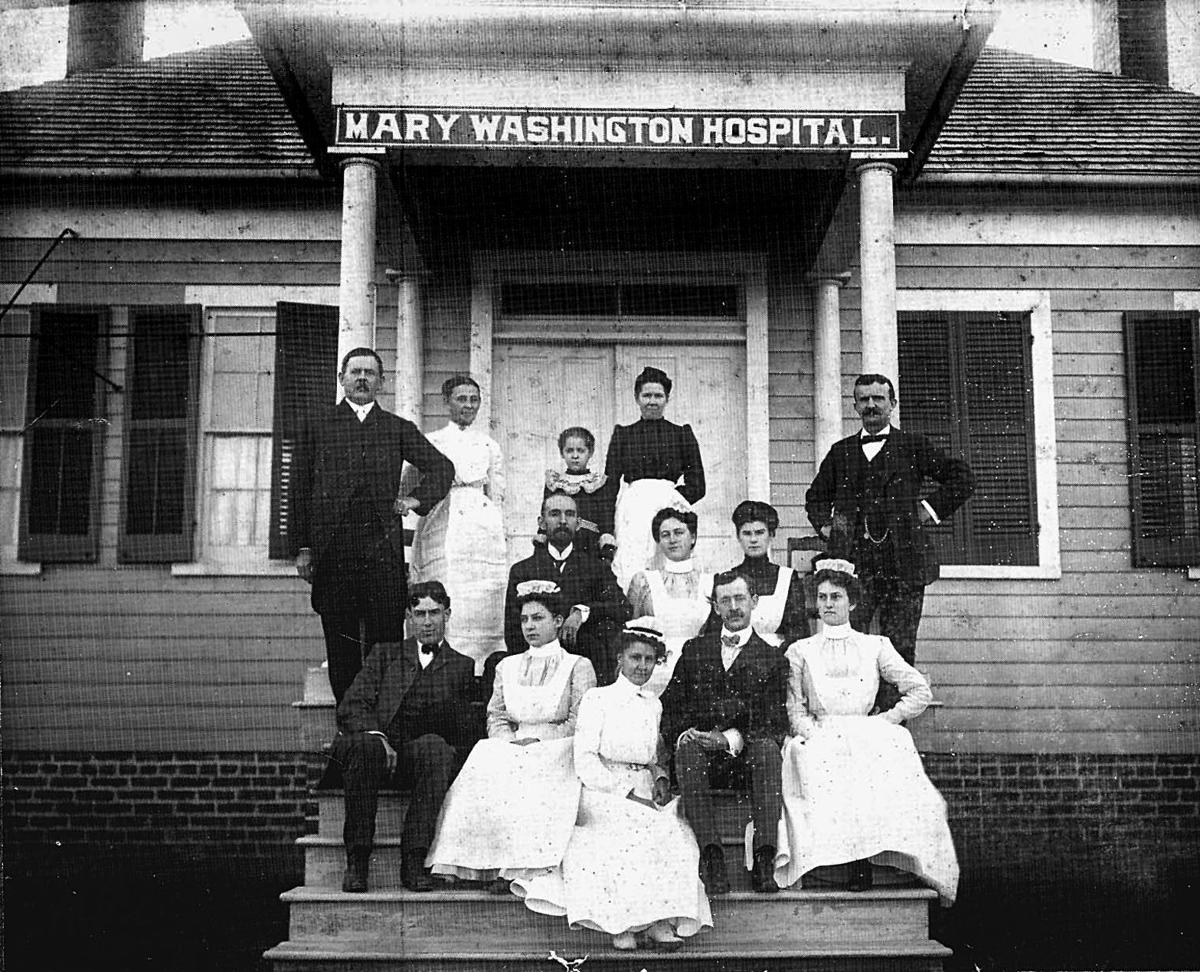 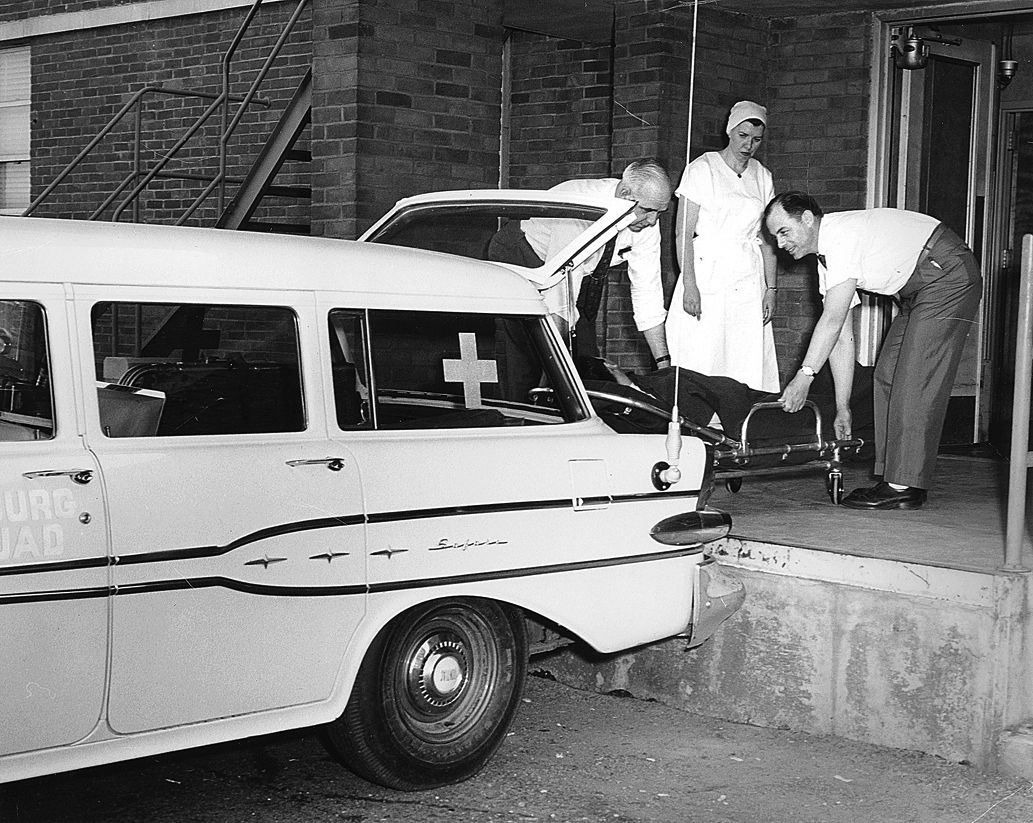 Fredericksburg Rescue Squad unloads a patient at MWH’s emergency room in the 1950s.

For 115 years, Mary Washington Hospital has been where people in Fredericksburg are born.

It’s where they die.

And the hospital, which has grown from an initial eight-room facility into a not-for-profit regional system of two hospitals and 28 health care facilities, is where people in the region experience poignant moments in between: welcoming children, saying goodbye to parents, having lifesaving surgeries and preventive care.

That history is being preserved by University of Mary Washington associate professor of history and American studies Jess Rigelhaupt, whose oral history project on the independent, community hospital became available online in January.

“Hearing personal accounts from many who have been part of Mary Washington Healthcare’s journey through the last 20-plus years is an important part of telling the story,” said Fred Rankin, recently retired CEO of MWHC about the project.

Rigelhaupt received a $25,000 grant from Mary Washington Healthcare to record oral history interviews and develop the website, mwhchistory.com. It includes interviews with longtime administrators, board members, physicians and nurses about the history of the organization. For the past two years, Rigelhaupt and more than 20 students in his classes have worked to record interviews, edit video footage and transcribe it all.

Rigelhaupt said the oral history of the health care provider is valuable because it exposes what doesn’t make the written record of the organization.

He began thinking about such a project in 2012, after coming to Fredericksburg and witnessing the change the medical campus was undergoing. Since 2013 was the 20th anniversary of the new hospital, and the political climate around health care was volatile, it was a perfect time to embark on the interviews.

He hopes the website will provide insight on what role a hospital plays in the primary care and public health of a community, and how to treat patients who can’t pay.

“One of the things I noticed was how much a sense of patient care drives how people talked about the organization,” he said. “I didn’t think that would come as much from board members and administrators.”

Fredericksburg Mayor Mary Katherine Greenlaw is a city native and both of her parents served on the hospital’s board of trustees and as leaders of its auxiliary. Greenlaw served on the Mary Washington Hospital Board of Trustees from 1978 to 1994 and is currently chairman of the Mary Washington Hospital Foundation Board of Trustees.

Her earliest memory of the hospital is being stitched up for a bad cut on her leg when she was age 5.

“It’s always been an important community asset, if you will,” she said about the hospital in her interview. “It is something that the community felt very proud of . . . It’s just been part of my life.”

John Fick III was another Mary Washington Healthcare Board of Trustees member who was interviewed. He came to MWHC in 1990 after having been involved with fundraising. In 20 years, he has served in nearly every position on the board and on nearly every one of the board’s committees.

Fick is also a pharmacist, and has continued his career volunteering in the pharmacy at the Moss Free Clinic since it opened in 1993. He talked about the move to the new hospital campus in 1993 from its former location at 2300 Fall Hill Ave., where the administrative offices are now.

“We’d been fortunate in Fredericksburg to have a growing population each year, and it still is growing,” he said. “The beds were full. We had to do an expansion of the new hospital sooner than we thought . . .Not only that, but we were having to add service lines as well . . .We just built things because we had to.”

Rigelhaupt was struck by the sheer force of MWHC as an economic driver in the community, even though it is an independently run, not-for-profit health care provider.

“There’s not much of that left in the country,” he said.

“One of my goals over the years as a board member is to have people be able to stay here for their health care, and not have to go someplace else,” Fick said. “Another goal has been to recruit the best physicians that you can possibly recruit. We’ve done an excellent job.”

Some of his earliest memories of the hospital are going to visit family members there at the 2300 Fall Hill Ave. location, and getting a polio vaccine there.

He remembers visiting the “colored ward,” which was reserved for minorities, particularly African–Americans, In the early 1960s. That segregation began to change after schools integrated.

Richardson recalled that, as a member of the board, “decisions were always made bearing in mind all segments of the community.”

Those decisions were made with a mixture of “what I would call a nonprofit that operated with the efficiency of a for-profit,” he said.

That means making sure the organizations made enough to expand and reinvest in the community.

Greenlaw said that with the growth, there was always an adherence to the hospital’s mission to better the community’s health.

“Somehow, because our boards have always been volunteers and always been committed to the community, that emphasis and that mission has held. That vision has held and they’ve held the staff to it . . .despite the fact that they have to deal with really, really tough financial decisions and business decisions every day,” Greenlaw said.

Moving forward, MWHC wants to remain an independent entity and is struggling with the changing landscape of health care, Rigelhaupt said.

Another interview, conducted by Kendall Gillis, one of Rigelhaupt’s former students, current nursing supervisor Diane Brothers shared how the hospital was perceived when she began working as a nurse at MWH in 1986, and how the future of health care is being negotiated.

“I think that when I first came here people were not so much on board with Mary Washington. They were more likely to say, ‘Take me to UVA or VCU or Washington or to the big hospitals.’ I think that was sort of a trend. There are lots of small community hospitals and people ask, ‘Is it the best? Can I get the newest possible things at that facility?’ Over the 25 years, it hasn’t been only they have that; it’s we have that.”

Brothers said that she has seen new trends affect the nursing staff as well.

“I think the whole political climate around medical care has changed,” she said. “I know there is a lot more conversation. In the past, I can’t say that I noticed nurses sitting around talking about how X bill is going to impact what happens to us.”

As the area grows more diverse, Brothers said the needs of patients have changed, and she also hears conversations about how policies have been adapted to meet new needs.

For Rigelhaupt’s students, the project was a learning experience, as well as informing them about Fredericksburg’s history.

Gillis was able to get a job with the George Washington Foundation after college, and is conducting oral history interviews on Stafford County’s past.

A Stafford native herself, Gillis said that while she was born at the old hospital, her sister was born in the newer one and the changes in location and growth in staff have affected her family.

“Health care is so much more complex than I could have imagined,” Rigelhaupt said. “The relationships between the administration, the boards, the physicians and local offices. And that’s ignoring the actual medicine. There’s a level of magic to it.”

I’ve been thinking a bit about the importance of first impressions. Normally, we consider the impression someone makes visually. While this is…

The revenue from the tax district will help the county pay for  $64 million in road projects tied to the clinic agreement.

Fredericksburg Rescue Squad unloads a patient at MWH’s emergency room in the 1950s.