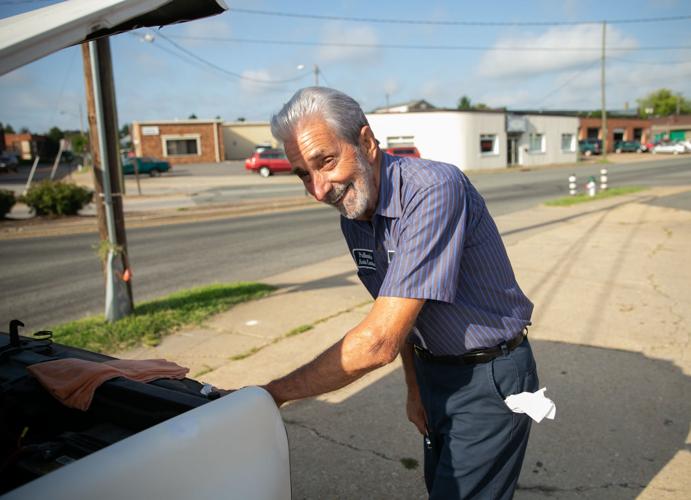 Bill Pulliam works at his auto repair shop in Fredericksburg. Pulliam, 82, is retiring at the end of September. 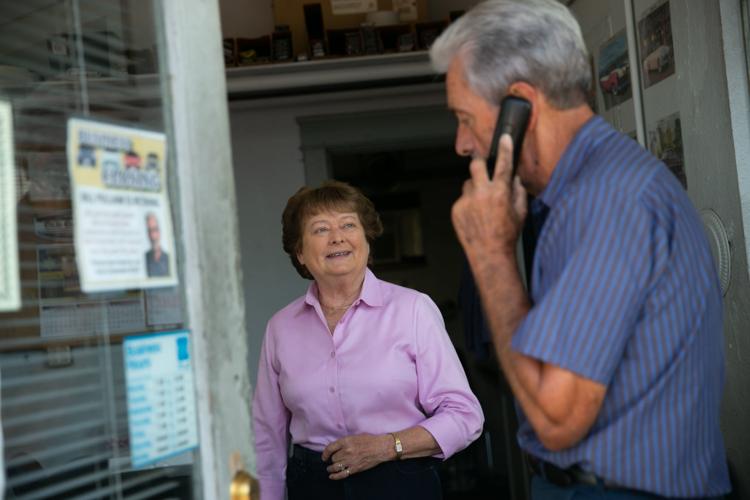 Patricia Pulliam looks at her husband Bill as he talks with a customer at his auto repair shop on Lafayette Boulevard. 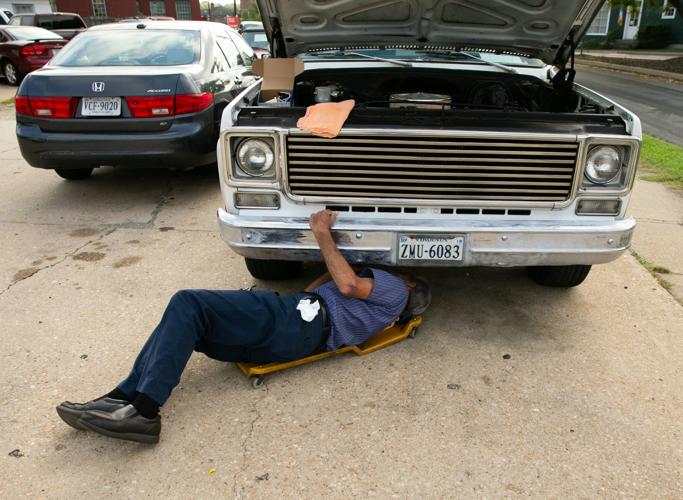 Pulliam slides under a truck at his shop. Over 24 years, he has developed a devoted clientele that praises his honesty. 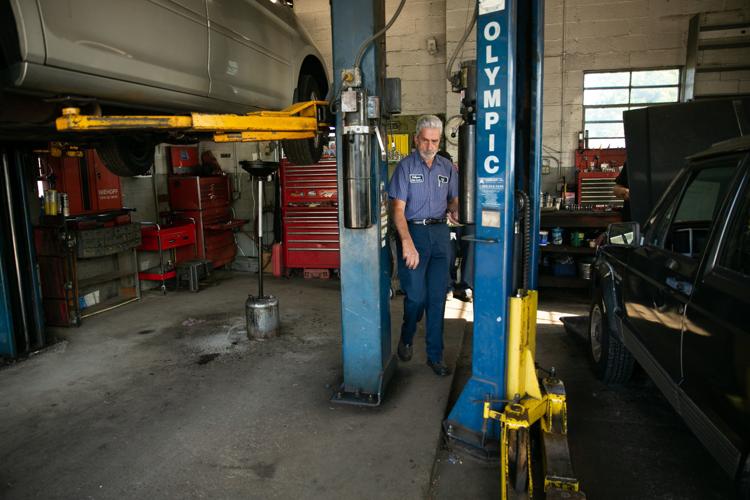 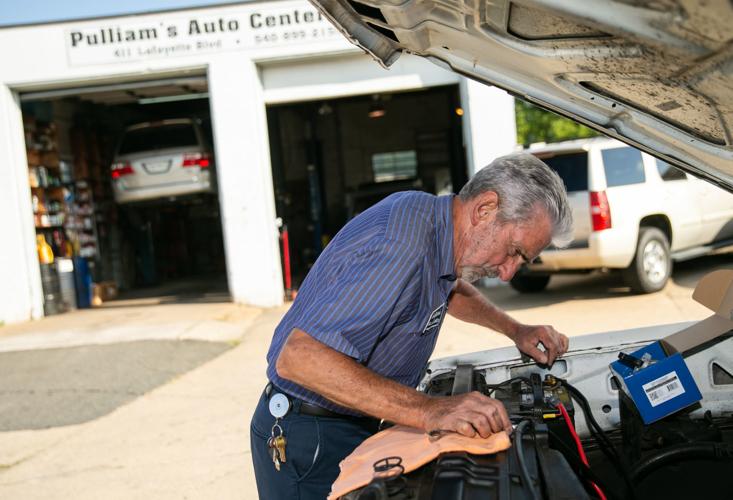 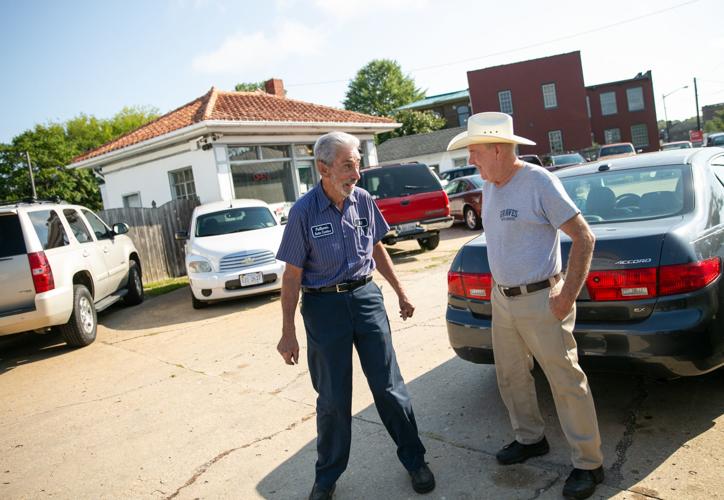 Pulliam’s customers sing his praises, calling him honest and understanding in a friendly, small-town way that’s becoming harder to find. He has decided to retire after 24 years of running his own shop. 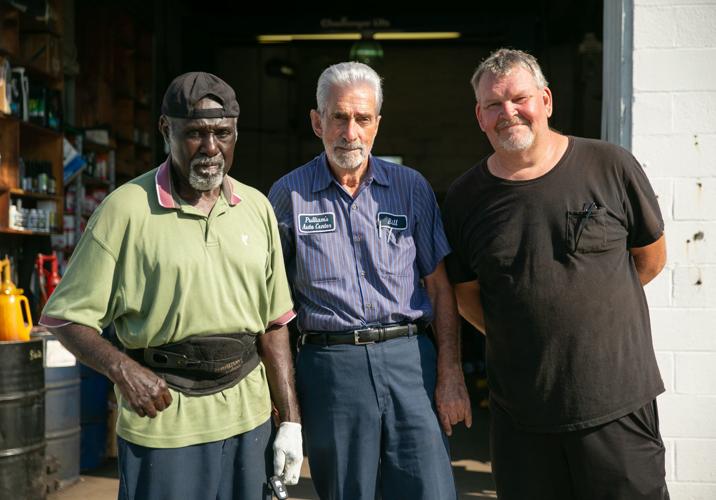 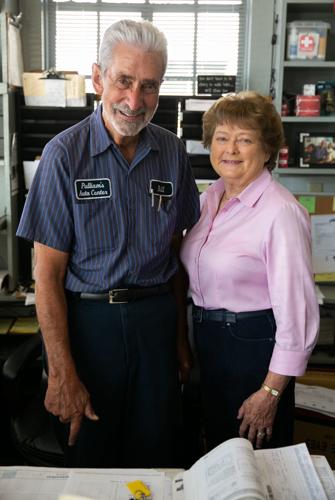 Pulliam’s wife Patricia has been at his side, managing the repair shop while also working as a Dahlgren librarian.

For nearly 25 years, Bill Pulliam has owned and operated an auto repair shop at the corner of Lafayette Boulevard and Kenmore Avenue. His shop has been extra busy recently.

In addition to repairing the dozen or more cars a day that he juggles between his bays and the limited parking at Pulliam’s Auto Center, he’s had to deal with some crying customers.

Generations of patrons are stopping in to say goodbye.

Pulliam recently announced the business he and wife Patt have owned and operated downtown for 24 years will soon close.

“We’ve set September 20th for the last day of working on cars and then September 30th to finish up all the paperwork,” said the 81-year-old mechanic who’s worked from 5 a.m. to 5 p.m. for as long as most can remember. “But it’s going to be hard not seeing my customers every day. They’re like family to me.”

Talk to a few of those customers, and it’s clear he operated his business in a special way.

Longtime customer Beatrice Kerr said she started going to Pulliam’s for repairs after she met a single mom who’d been homeless for a while.

“She told me about the caring mechanic who provided free car repairs so she could continue to work and get on her feet,” said Kerr. “The first time I took my car to Bill, he told me I didn’t need a repair. I wanted to pay him, but he was too honest to take my money!”

Kerr added, “I have sent many people to him, and they all report that he is the most honest mechanic they ever met.”

Wayne Colton, a Pulliam customer for 15 years, said the businessman is special because of integrity and selflessness.

Colton had a car that would start intermittently—something tough to fix because it always seemed to work fine when he visited the shop.

“He finally said that next time it wouldn’t start, I should call him to come out to my house and fix it, and that’s what he did,” said Colton. “He cares about his customers as much as anyone I’ve ever known.”

Edie Gross Evans, another longtime customer, said, “In a world as bananas as the one we live in, the peace of mind that comes from having an honest, top-notch mechanic in your corner is immeasurable. Without one, every squeal, every whine, every ca-chunk your car makes induces stomach-churning panic.”

Add to those testimonials a steady trickle of stories from folks who say Pulliam would fix their cars, put the key under the mat and ask them to pay the next time they swung by.

The mechanic many will miss for his stories, laugh and friendly wink said for him it wasn’t hard to figure out how to treat his customers: fairly, with kindness—the way he’d want to be treated.

The D.C. native, who grew up in Maryland, said he always had a knack for working on cars. He attributes it partly to growing up with a hands-on father who was a plumber and barber.

A few years in the Navy—where he got in hot water with officers for occasionally diving over his ship’s side for a swim—were followed by training as a draftsman that didn’t take, because he hated sitting at a desk all day.

Pulliam eventually found himself working as an auto mechanic, getting training at various schools while employed at Nissan and General Motors dealerships in town. He credits experienced mechanics he worked with there and at Merryman’s auto shop with teaching him what he knows.

Despite enjoying the customers at those places, Pulliam said his real dream was operating a repair shop of his own, something he got the chance to do 24 years ago this month.

He and Patt, who has managed the auto center’s books while working as a librarian at the Dahlgren Navy base for more than 40 years, said deciding to close the shop has been an emotional decision.

“If I could get more help, we’d keep going,” said Bill, noting that it’s hard these days to get experienced mechanics who want to hang around. But the husband and wife, who haven’t taken a vacation in nine years, said the mounting stress of running a car repair business means it’s time to bow out.

Pulliam, who said he frequently dreams about how to fix customer’s cars, will have to find a way to replace the interaction with people at the shop.

From the mail and tow trucks that honk passing his shop to the customers who bring four-legged visitors in search of his stash of dog treats, Pulliam said his days at the shop have been full of friendliness.

“We’ve got regulars who stop by all the time, whether it’s meeting Bill for breakfast or showing up to take a seat to talk,” said Patt, who pulled out a framed picture with a handful of regulars.

“I’m the pretty one in the middle,” joked Bill, noting that he has some visitors who just seem to instinctively know when there’s food or coffee to be had. “Bill Kertsos, who lives nearby, seems to be able to smell fresh doughnuts when they come in here.”

These days, customers are treating Pulliam like it’s his birthday or Christmas, delivering cakes, flowers, cookies and heartfelt hugs as tokens of their respect and thankfulness for years of devoted service.

“Some of those who’ve stopped by have been customers of mine for more than 30 years,” he said. “I’m now working on the cars of customer’s children we watched grow up coming in here.”

“Turning 82 in November, Bill needs to take some stress off,” said Patt, noting that she and her husband have things they’d like to do with free time they’ve seldom had. “He’s got a few cars of his own he’d like to restore and work on.”

One of them is a 1999 Mercedes that Bill said he likes to wash and wax, though seldom drive.

The Pulliams have scheduled a party/celebration for customers and friends to be held from 3 to 6 p.m. on Saturday, September 28th at Pulliam’s Auto Center at 411 Lafayette Boulevard in the city. Food and drink will be provided and they look forward to sending the business out on an up note.

A roundup of news and notes pertaining to Fredericksburg-area businesses.

Capital One Financial Corp. will return to U.S. offices in hybrid model on Sept. 6

Capital One Financial Corp. is planning a full reopening of its U.S. offices in a hybrid work model on Sept. 6, CEO Richard Fairbanks announced Wednesday. The financial services and credit card giant is the Richmond region's largest private employer.

How to avoid 'rug pulls,' the latest cryptocurrency scam

A new type of scam has emerged in the hype-filled world of cryptocurrency: the "rug pull." Here's a closer look at the scam and more of the week's best money reads.

Stocks claw back from edge of first bear market since 2020

The stock market clawed back from a midday drop Friday after coming to the edge of its first bear market since the beginning of the pandemic.

Dominion makes its case to SCC for $9.65 billion from customers to build wind farm

Acknowledging the risk of cost overruns but saying it doesn’t anticipate any, Dominion Energy made its case Tuesday to state regulators for approval of $9.65 billion from its Virginia customers to build the country’s largest offshore wind farm.

🎧 Listen now: Take these steps to save money with interest rates on the rise.

This is all essential information to have.

Save money by cutting costs from the top down

Save money by cutting costs from the top down

Bill Pulliam works at his auto repair shop in Fredericksburg. Pulliam, 82, is retiring at the end of September.

Patricia Pulliam looks at her husband Bill as he talks with a customer at his auto repair shop on Lafayette Boulevard.

Pulliam slides under a truck at his shop. Over 24 years, he has developed a devoted clientele that praises his honesty.

Pulliam’s customers sing his praises, calling him honest and understanding in a friendly, small-town way that’s becoming harder to find. He has decided to retire after 24 years of running his own shop.

Pulliam’s wife Patricia has been at his side, managing the repair shop while also working as a Dahlgren librarian.