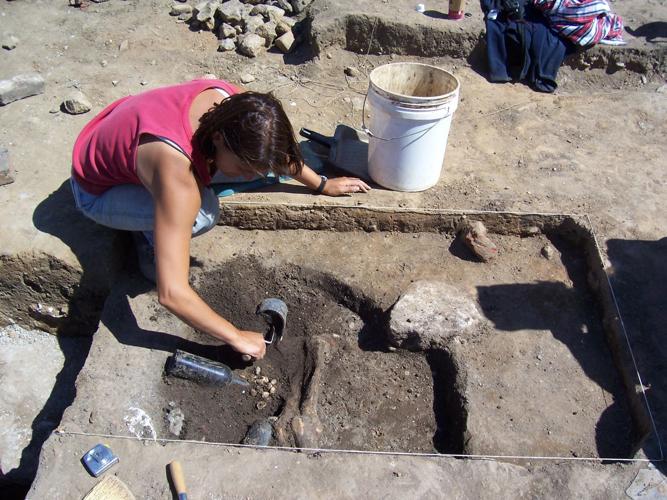 An archaeologist works on the site of Roger Dixon’s store and the old Indian Queen Tavern downtown. 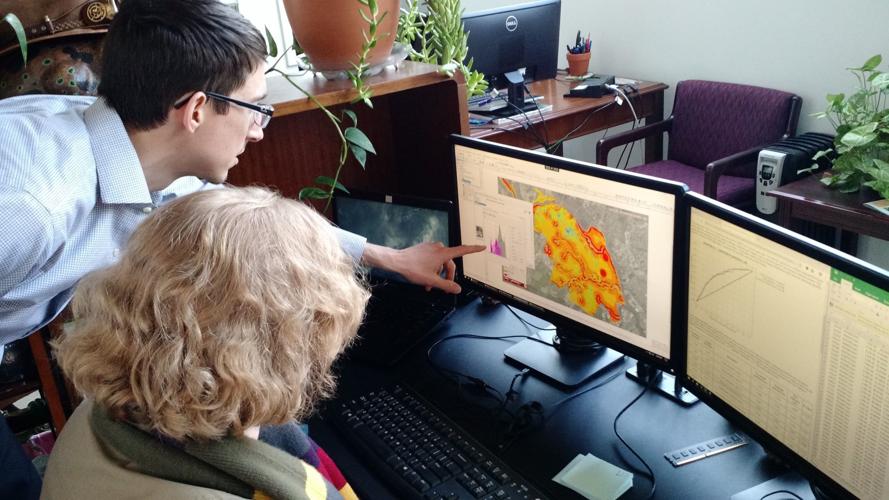 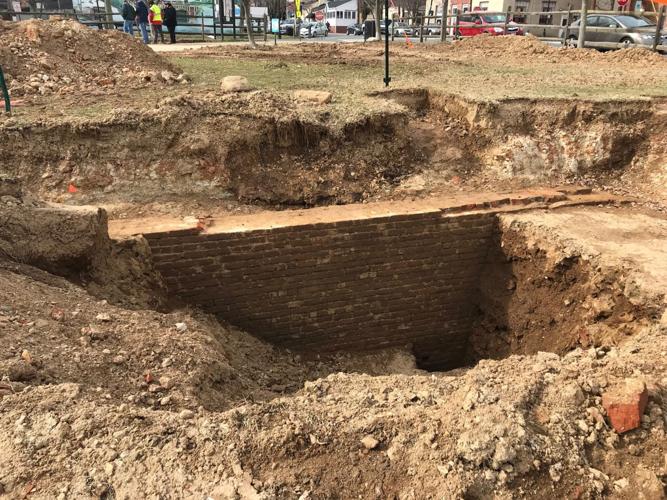 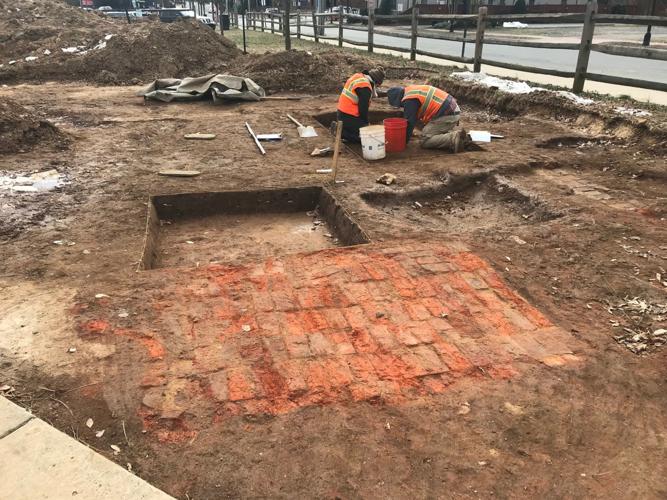 Archaeologists work on a dig at Riverfront Park, which was previously a mixed residential neighborhood of tenements and single-family homes.

History is everywhere in Fredericksburg, but its traces are often overlooked because they lie hidden under pavement, park land and redevelopment.

Archaeological digs have helped bring some of that history to light. Fashionable ceramics, glassware and objects of personal adornment found at the Fall Hill/Snowden Park Tenant Site, for example, provide information about the lives of rural tenants around Fredericksburg during the late 18th century. And rifle pits, hut sites and a parade ground excavated at the Smith Run Site offer insights into Confederate camp life.

Now, Fredericksburg has launched a new interactive GIS-based tool that not only explains the city's plans for preserving historic resources, but also shares maps showing a selection of its archaeological sites along with photos of some of the objects found there. Called "Out of Sight, Out of Mind: Archaeological Resources in Fredericksburg, Virginia," it's an interactive "story map" available on the city's website, fredericksburgva.gov.

“The story map is one tool in a comprehensive public engagement process that begins now and will continue through this year,” Kate Schwartz, historic resources planner for the city, said in a news release. “The story map is intended to be a resource for the public, both as we work to adopt and implement a city archaeology ordinance, and on a permanent ongoing basis to share with our community our archaeological resources.”

An archaeology working group was established in January 2017 to begin developing a citywide archaeological ordinance as part of the City Council's vision of Fredericksburg as "a proven leader in historic preservation."  Councilman Matt Kelly, who has been vocal about the need to save Fredericksburg's historic resources, has called this a "necessary guidance to support new and reuse development while preserving our valuable and unique history."

The working group includes members from the National Park Service, the Fredericksburg Area Museum, the University of Mary Washington, Historic Fredericksburg Foundation Inc., local development groups and cultural resource firms. They've overseen a citywide archaeological assessment and identified recommended policies and procedures. Their work, along with case studies and proposed next steps, are available on the story map.

City staff and working group members created it together as a way to communicate new government policies and priorities, which "is always a challenge,” said Planning and Building Development Director Chuck Johnston. He said the new interactive resource "highlights our efforts to protect and celebrate Fredericksburg’s incredible array of archaeological resources."

The story map includes case studies of previous archaeological investigations along Fall Hill Avenue, in Market Square, at the Riverfront Park site and where Courtyard by Marriott Fredericksburg Historic District stands today. Each of the digs helped fill in portions of Fredericksburg’s history that were previously unknown.

The Fall Hill/Snowden Park Tenant Site, for example, was excavated by Dovetail Cultural Resource Group in 2014 as part of the Virginia Department of Transportation’s Fall Hill Avenue and Mary Washington Boulevard Extension Project. The site, located near Central Park and an apartment complex, was farmland when the McCoy family lived there from 1761 to 1795.

Archaeological excavations recovered more than 5,000 artifacts, including fashionable types of ceramics, specialized glassware and objects of personal adornment. They show that even lower- to middle-class planters in Virginia's countryside were able to obtain and display the latest material goods.

Dovetail also excavated the Smith Run Site, which included a portion of the Guest farmstead where Confederate troops under the command of Gen. Richard Anderson camped during the winter of 1862–63. It was also part of the Battle of Chancellorsville in May 1863. The troop occupation and fighting turned the Guest property into a wasteland, and relic hunters later diminished the site's integrity.

Not all traces of the camp were destroyed, however. Archaeologists discovered 164 possible hut sites, 39 latrines, a parade ground, an upper officer’s terrace, and 14 rifle pits. These helped to show how the camp was laid out, how the land's natural topography was used and the everyday existence of a Confederate soldier.

"This data assisted in an interpretation of daily soldier life and allowed for a detailed comparison between actual conditions at Union and Confederate camps, much of which is left out of the history books," the story map states.

"Out of Sight, Out of Mind" also includes a new predictive model developed by Fredericksburg cultural resources firm Marstel–Day, which shows the areas of the city most likely to be rich in archaeological resources from the prehistoric period to the more recent past. The model incorporates "known archaeological sites, historic maps and archival research as well as environmental and topographical data that influenced prehistoric settlers such as elevation or distances to bodies of water," according to the story map.

The city will use the model to designate an Archaeological Preservation District, and will require that an archaeological study be done before land is disturbed within areas designated as a medium-high or high priority. Together, the model and district will form a foundation for applying the ordinance to land development applications and provide opportunities to educate the public about Fredericksburg’s archaeological resources.

The public is encouraged to interact with the story map and find more information about the proposed archaeological district, ordinance and public education programs by visiting the online site or contacting the Department of Planning and Building Services at 540/372-1179.

An archaeologist works on the site of Roger Dixon’s store and the old Indian Queen Tavern downtown.

Archaeologists work on a dig at Riverfront Park, which was previously a mixed residential neighborhood of tenements and single-family homes.