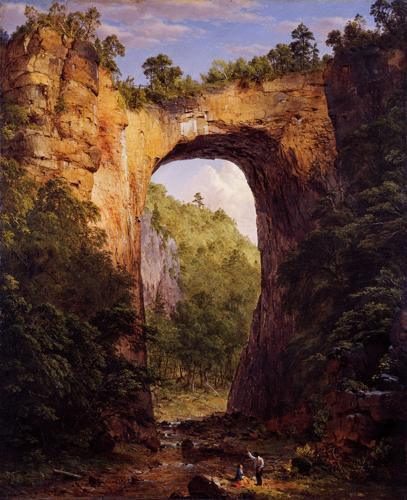 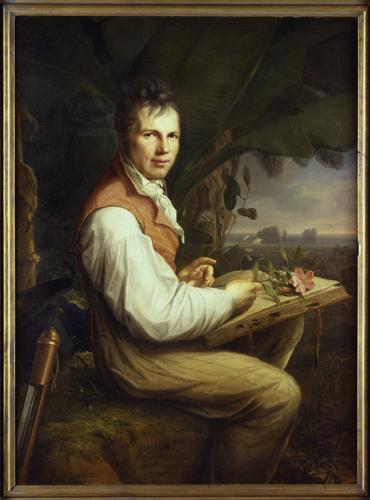 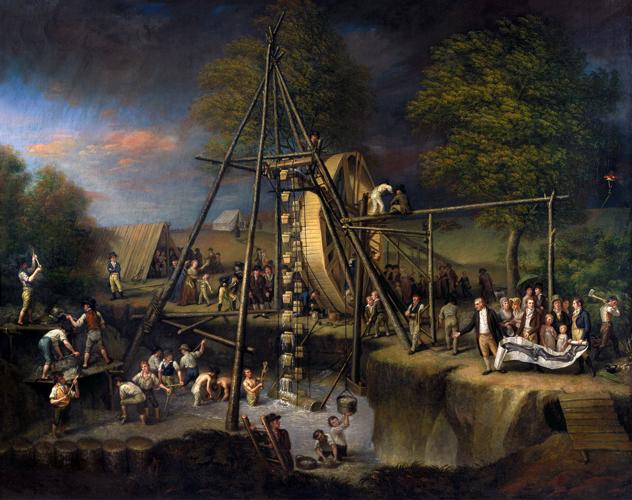 ‘Exhumation of the Mastodon’ (ca. 1806–08) by Charles Willson Peale, who escorted the German scientist Alexander von Humboldt during his trip to the United States.

The Smithsonian American Art Museum’s exhibit “Alexander von Humboldt and the United States: Art, Nature, and Culture” focuses on a six-week visit in Humboldt’s life that would later impact on American cultural development in the visual arts, sciences, literature, politics and exploration.

After five years of exploration over thousands of miles of land, rivers and mountains in South America, Mexico and Cuba to document the connections of all things in nature, Humboldt wanted to make one more stop before he sailed home to Europe.

Humboldt was fervent to see the democratic style of government flourish and to meet the man he most admired: the primary author of the United States’ Declaration of Independence—President Thomas Jefferson. Having recently acquired the Louisiana Territory, Jefferson was also interested in meeting Humboldt to learn of his discoveries about the world’s ecosystems.

On May 19, 1804, the Spanish cargo ship Concepción entered the capes of Delaware to sail into the harbor of Philadelphia, and it is here that Humboldt began his trip over land to Washington, D.C.

Humboldt was escorted around the United States by the artist, naturalist and patriot Charles Willson Peale. In “The Artist in His Museum” (1822), Peale reveals behind a red velvet curtain his “world in miniature.” A portrait of George Washington is posed above a case containing the national symbol of the bald eagle, thus relating American cultural identity, democratic ideals and natural history. Looming in the background is the centerpiece of his museum, and of this SAAM exhibit, the mastodon.

In “Notes on the State of Virginia,” Jefferson had laid out America’s cultural prospects and geographic superiority. Inspired by the search for natural wonders in the new world that would rival the old world, the largest known terrestrial being at the time, was discovered in Newburgh, N.Y., near the site of Washington’s headquarters during the final month of the American Revolution.

The event is dramatically depicted in Peale’s “Exhumation of the Mastodon” (1806-08). The work that has been described as “a history painting, landscape and creation myth all in one” is well matched with SAAM’s online video on how the mastodon was assembled for this exhibit. (americanart.si.edu/videos/installing-peales-mastodon-saam-time-lapse-161230)

As a side note, before Humboldt left the United States, he was honored at a celebratory dinner beneath this skeleton at the Peale Museum. This exhibit is the mastodon’s first return to the United States in more than 170 years, since it was sold after the museum closed in 1847.

Jefferson owned the land that included the Natural Bridge, which he called “the most sublime of nature’s works.” Among the American artists who were inspired by Humboldt was the outstanding landscape painter Frederic Edwin Church. A facsimile of his painting “The Natural Bridge, Virginia” (1852), as well as “Niagara” (1857), represented impressive natural features often interpreted as national and cultural icons. A map of the time places these two symbols joined together rather than their realistic geographic separation of hundreds of miles.

Using Humboldt’s book “Views of the Cordilleras” as a guidebook, Church would retrace some of Humboldt’s journeys in a seven-month journey through South America in 1853. For “Cotopaxi” (1855), Church used Humboldt’s engraving of Ecuador’s active volcano. In a second trip in 1857, Church would study “Humboldt’s Mountain,” which Humboldt had ascended to over 19,000 feet in 1802, setting a mountaineering record at the time. Church pays homage to this feat of the great explorer with his several stunning scenes, like “Mount Chimborazo, Ecuador” (1857).

Jefferson and Humboldt would continue their exchange of ideas in a 22-year-long correspondence. In 1845, Humboldt’s five-volume “Kosmos” unified the various branches of scientific knowledge in his attempt “to examine the interweaving and interacting of all forces of nature.” Not only was Humboldt a scientist who had written on astronomy, botany, chemistry, economics, geography, geology, physics, politics and zoology, but he also spoke out strongly about the treatment of indigenous people in South America who had been his guides in what was then New Spain. He was an adamant spokesman for the abolition of slavery, believing democracy should extend to all inhabitants of a nation, regardless of race or standing. This remains his strongest lifelong criticism of both New Spain and the United States.

Long after Humboldt returned to Europe, his interests in the Americas continued. Some of the most interesting stories in the exhibit follow George Catlin from his meeting Mandan chief Mató-Tópe, also called Four Bears, who permitted the artist to witness the sacred O-Kee-Pa ceremony. Along with Catlin’s portraits of the chief and other American Indian warriors is a watercolor and pencil on paper work by Mató-Tópe, “Battle with a Cheyenne Chief” (1834). In French court painter Karl Girardet’s “Danse d’indiens Iowas devant le roi Louis-Phillipe aux Tuileries (Dance of the Iowa Indians before the King Louis-Phillipe at the Tuileries)” (1845), Catlin appears explaining the dances to Queen Maria Amalia and afterward. Humboldt and the American Indians went on a tour of the Louvre.

One place on Humboldt’s must-see list because of his admiration for Washington was Mount Vernon. We don’t have to travel as long or as far as Humboldt did to visit Mount Vernon, Monticello or to see one of Virginia’s own great wonders, The Natural Bridge. Currently, the Virginia Museum of Fine Arts’ exhibit “Virginia Arcadia: The Natural Bridge in American Art” (on display through Aug. 1) examines the wonder of the Natural Bridge that has attracted both scientists, scholars, artists and tourists for centuries.

Spanning five centuries with works by artists from 24 countries, 'Afro-Atlantic Histories' is now on display at The National Gallery of Art through July 17.

Theater review: 'Nunsense' turns up the fun at Riverside

"Nunsense," now onstage at the Riverside Center for the Performing Arts through July 10, is a light-hearted charmer about five madcap nuns putting on a variety show.

The paintings in the new exhibition at the Virginia Museum of Fine Arts are superb and stand on their own individually, as do the celebrated artists who painted them, but it is their underlying story that binds them together and makes for a most compelling show.

Jason Reitman and Marlee Matlin join Oscars board of governors

Jason Reitman and Marlee Matlin join Oscars board of governors

'My Big Fat Greek Wedding 3' is in the works

'My Big Fat Greek Wedding 3' is in the works

‘Exhumation of the Mastodon’ (ca. 1806–08) by Charles Willson Peale, who escorted the German scientist Alexander von Humboldt during his trip to the United States.