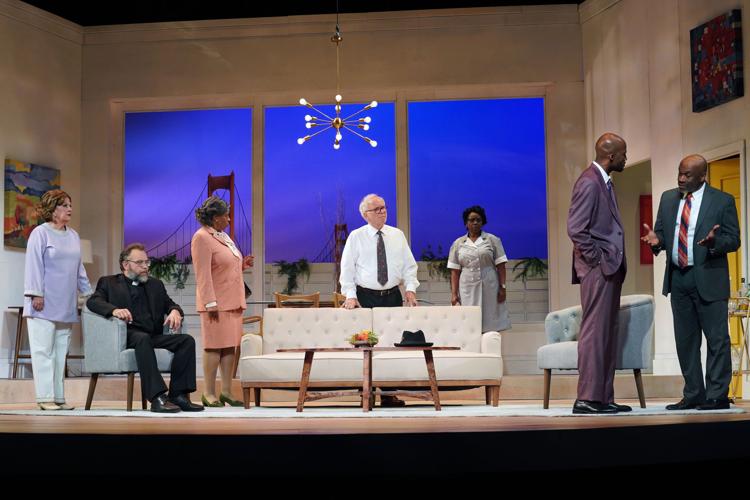 'Guess Who's Coming to Dinner' is onstage at Riverside Center for the Performing Arts through Sept. 4. 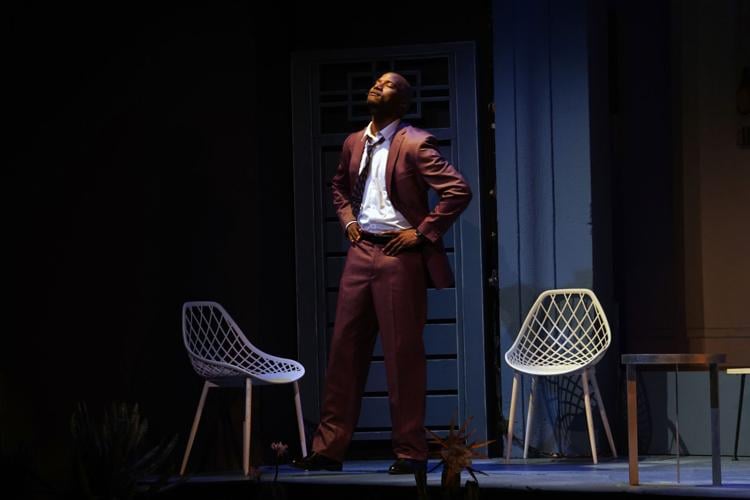 BY GAIL CHOOCHAN THE FREE LANCE-STAR

After the light-hearted "Nunsense" earlier this summer, Riverside is going for meatier fare with “Guess Who’s Coming to Dinner."

The local performing arts center brings this beloved melodrama to the mainstage in a thoroughly satisfying production, with wonderful direction by Anita Gonzalez. It’s a powerfully moving and inspiring story about interracial love and family. Todd Kriedler’s adaptation of the iconic film is imbued with raw honesty, along with frequent touches of humor, as it navigates the deep and uncomfortable conversations that arise when Joanna Drayton brings home her Black fiancé, John Prentice, to meet her parents and secure their blessing. Their coupling catches everyone off guard, from her liberal parents to her mother Christina’s horrible assistant to her family’s longtime housekeeper—not to mention John’s own parents.

While “Guess Who’s Coming to Dinner” seems dated with its 1967 mentality, its story about interracial relationships still resonates today. Hard to believe it was last month—in 2022—that the House passed the Respect for Marriage Act, protecting rights of interracial and same-sex marriages, in a bipartisan 267-157 vote. Come on, love is love, folks.

The film, featuring a screenplay by William Rose, was groundbreaking in its portrayal of an interracial romance between a white woman and a Black man at a time when a marriage of this kind couldn’t exist in 17 states. During the year of its release, the Supreme Court made its landmark ruling in the Loving v. Virginia case involving the Caroline County couple and struck down anti-miscegenation laws.

Full disclosure: I have never seen Stanley Kramer’s classic starring Sidney Poitier, Katharine Hepburn and Spencer Tracy, and that’s a good thing. It made it more exciting to see how this story unfolds at Riverside, without the constant comparisons to the acting legends and the Oscar-winning film itself.

Riverside has recruited an exceptional cast, who can steer through Kriedler’s dense dialogue as well as handle the show’s dramatic and comedic currents. The talents of the nine performers are maximized in this show, and even those who are late to the party—Crystal Henry Arful–Addoh and Neal Grace–Burks as John’s parents—are given time to convey their thoughts on the impending marriage.

Marc D. Lyons makes a memorable début at Riverside as the handsome widowed doctor who has found love again. John is the picture of poise and sensibility, but when pushed, the audience is privy to a deeper, emotional side to his character and gets a glimpse of his own familial issues. Rachel Pulley, who has appeared in several of the company’s productions, is a joy to watch onstage with her character’s abundant enthusiasm. The love shown during their dynamic exchanges is palpable, and you just want them to get their happily-ever-after.

Robert John Biedermann and Kathy Halenda take on the hefty roles of Matt and Christina Drayton. “I know the world as it really is out there,” he declares. As an overworked newspaper publisher, Matt sees what goes on every day and is worried about what will happen to his daughter if this marriage goes through and what kind of lives their children would have. Matt’s galvanizing words during a dramatic scene make for one of the show’s most heart-piercing moments. And Halenda, a versatile Riverside favorite, is terrifically paired with Biedermann as the stoic and fiercely supportive mother.

As the tough but caring housekeeper Tillie, Nancy M. Crawley is delightful and she also gets the best one-liners. Tillie is very protective of Joanna, whom she’s watched growing up. She's extremely wary about this newfound relationship, thinking John might be some kind of hustler, but like many characters in this show, there’s an opportunity to change hearts and minds.

And Alan Hoffman as Monsignor Ryan, and Matt’s golfing buddy, brings much levity to the tension-filled situation and is seemingly the only one to embrace John immediately with no reservations.

With heartfelt performances and a powerful message about love and family, this is one “dinner” you want to sit down for.

Cirque du Soleil brings back 'Kurios,' its steampunk-inspired production, to the big top tent at Lerner Town Square at Tysons. This fan-favorite and family-friendly show runs through Sept. 25.

A few years has passed since Shakespeare and the Folger Theatre have been together. A groovy staging of “The Merry Wives of Windsor” wrapped u…

'Guess Who's Coming to Dinner' pays a visit to Riverside Center

The title of the show asks a simple question: “Guess Who’s Coming to Dinner”?

Dance Matrix & Company’s Performing Arts Festival returns this Friday and Saturday, with performances and workshops at the Downtown Librar…

'Guess Who's Coming to Dinner' is onstage at Riverside Center for the Performing Arts through Sept. 4.