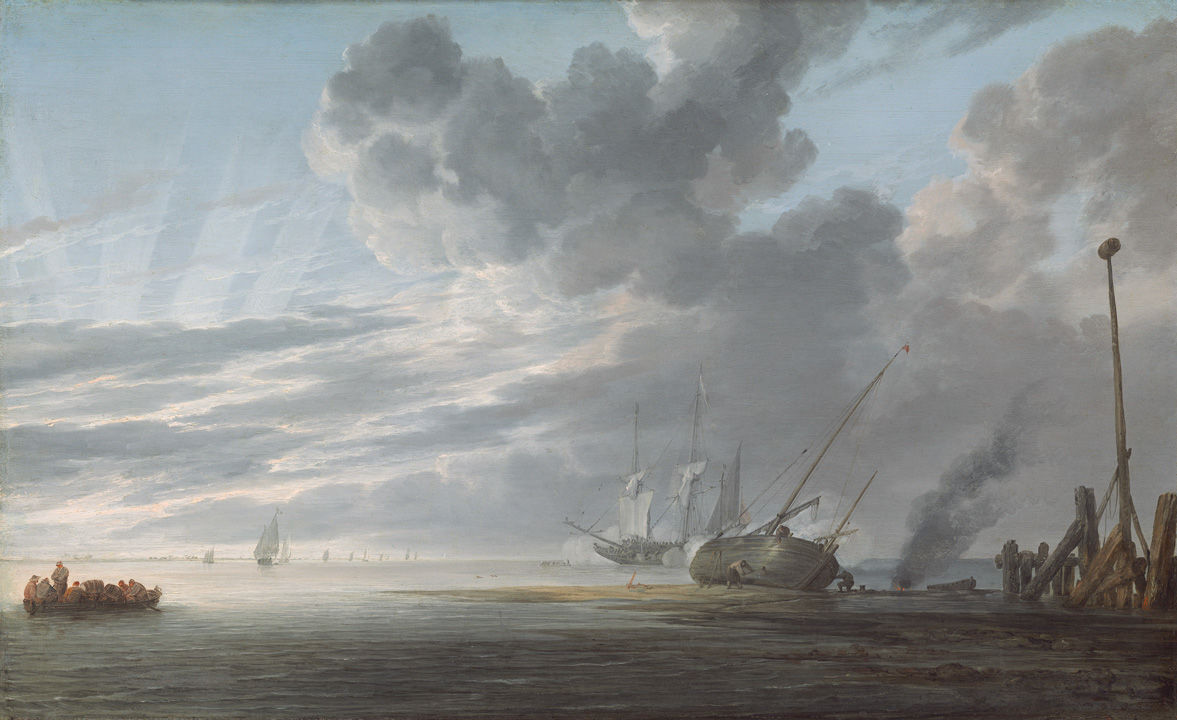 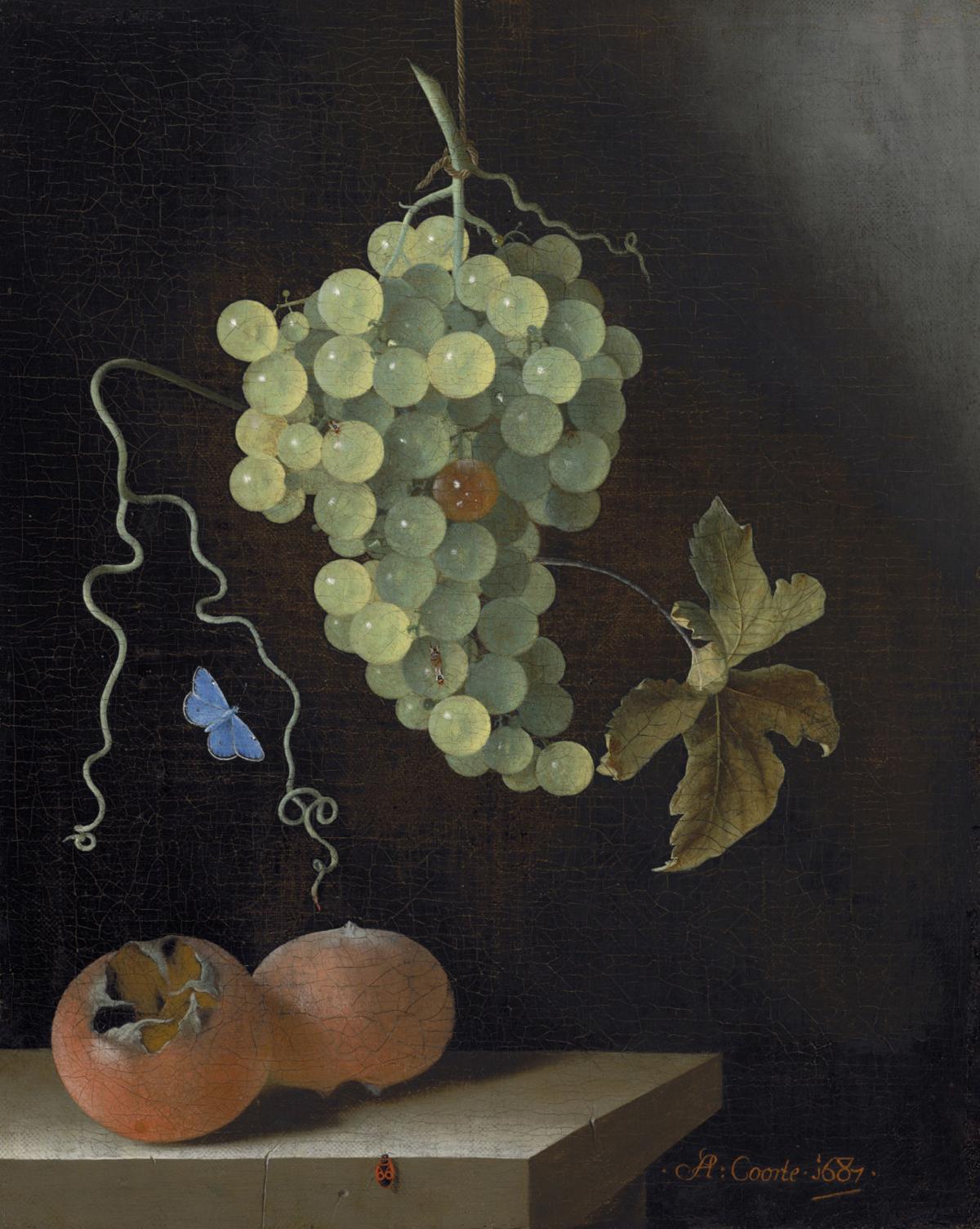 Adriaen Coorte’s ‘Still Life with a Hanging Bunch of Grapes, Two Medlars, and a Butterfly.’ 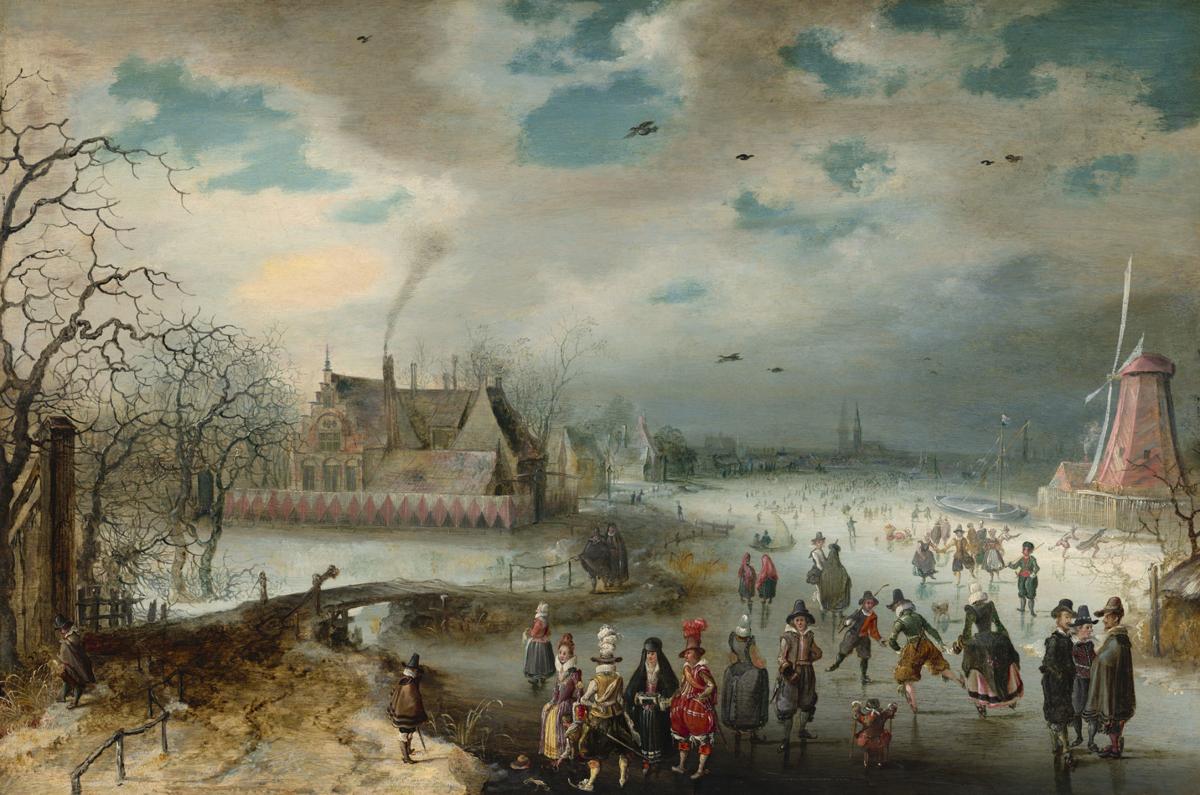 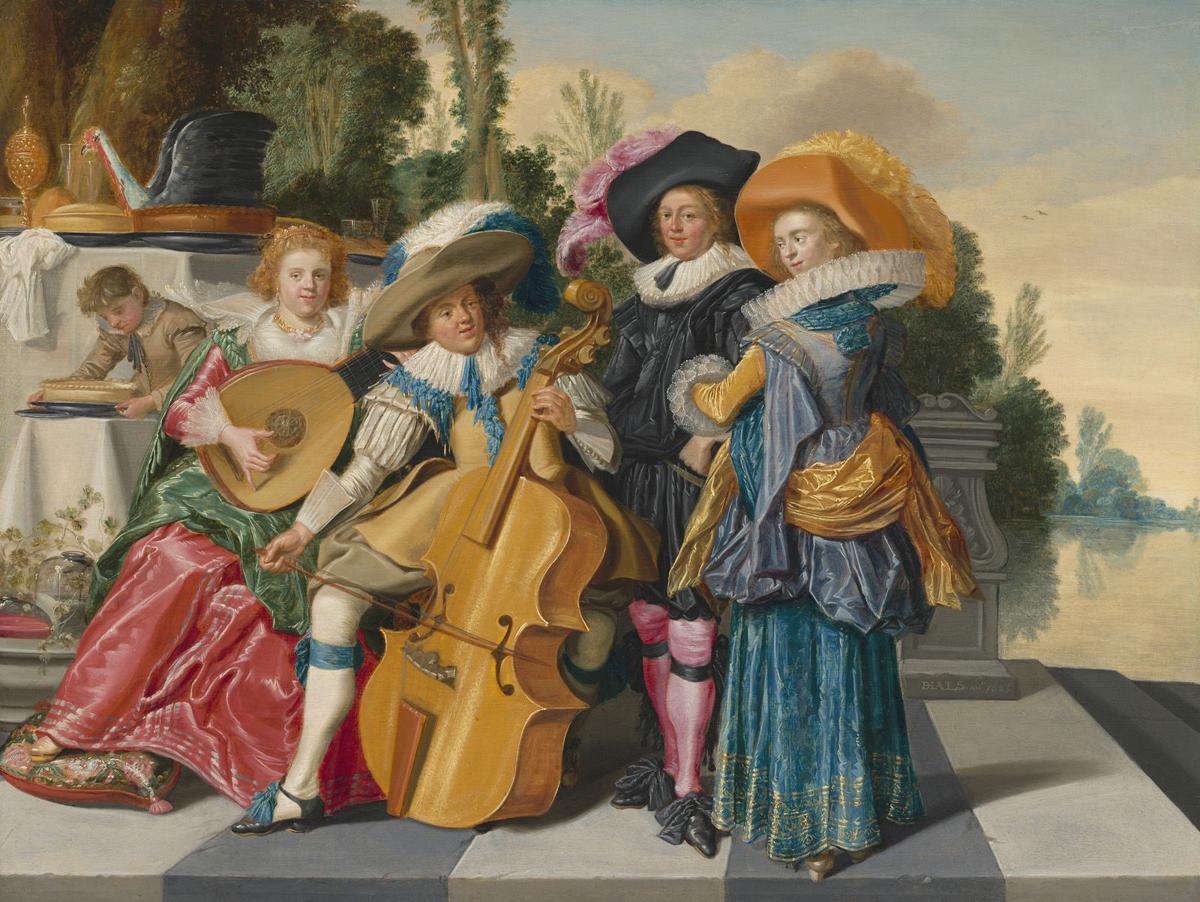 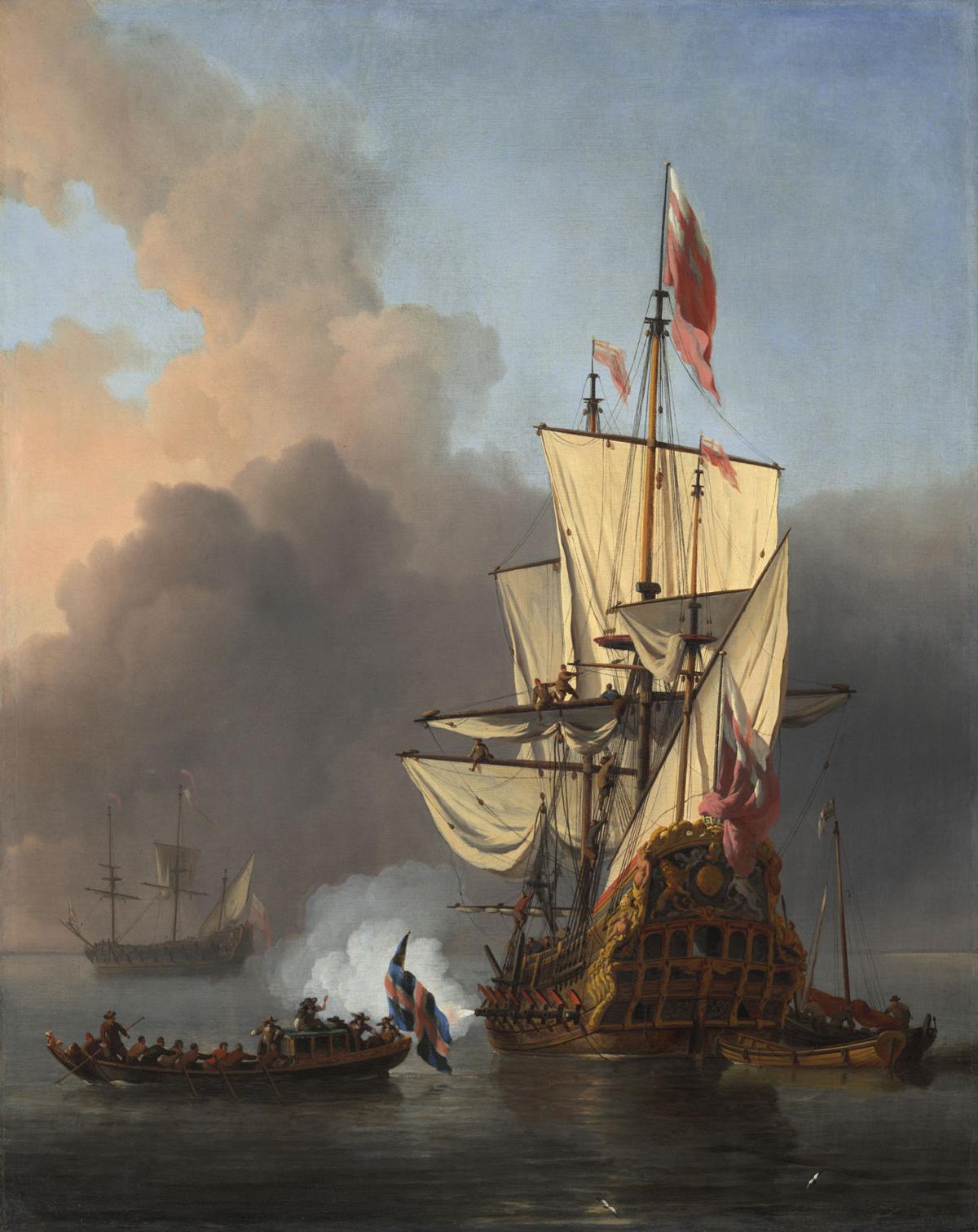 ‘An English Warship Firing a Salute’ (1673), oil on canvas by Willem van de Velde the Younger.

While several museums on the National Mall are featuring shows with contemporary themes on critical issues, the National Gallery of Art has opened a more traditional exhibit. In an intimate suite of spaces that feature small paintings from the Golden Age of the Netherlands, “Clouds, Ice, and Bounty: The Lee and Juliet Folger Fund Collection of Seventeenth-Century Dutch and Flemish Paintings” is a visit to a magical time in the young Dutch Republic.

In an age like ours, where images constantly bombard us in all forms, this exhibit is a retreat where we as guests can share viewing paintings that were once seen by few besides family and friends in private homes. Here are majestic seascapes, expansive landscapes, lively genre scenes and rich still-life works that were treasured for generations.

Yet while this classic exhibit seems a moment far removed from current contemporary art devoted to climate change and racial and gender inequalities, all was not peaceful in this land.

Yes, the Dutch Golden Age was the center of the arts and science in Europe. There was a prosperous middle class from the work of trading and manufacturing. But the 17th century was a turmoil of wars with England, France and Spain threatening the newly formed Dutch Republic. “An English Warship Firing a Salute” (1673) by Willem van de Velde the Younger is a reminder of its rivalry as an ocean power.

As nostalgic as “Skating on the Frozen Amstel River” (1611) by Adam van Breen seems today, Europe was experiencing a period of unusually bitter winters in a “Little Ice Age.” In contrast to the brightness of van Breen’s work, dark clouds loom over the ships in “Amsterdam Harbor Scene” (1654/55) by Reinier Nooms, called Zeeman.

What of the lavish spreads of food on the table, dazzling in their variety of offerings? “Still Life with Peacock Pie” (1627) by Pieter Claesz is filled with detail, a credit to the sophisticated technique of the painter, as well as a celebration of the bountiful variety available in the Netherlands. The recipes for creating such specialty foods, in which the remainder of the fowl was then used as decoration, might cause a smile today. Yet this scene is not so simple. The luxury of the items represent the lands where the Dutch trading companies amassed great wealth. Not only through the oceanic slave trade, but goods were reaped from the industries fueled by slave-labor conditions in both the East and West.

One suggestion for viewing is a comparison with works of literature. The painter creates a fiction of life by taking a moment to tell a story or recount an incident. Some are fantasies filled with the frivolity of fashionable partiers detached from everyday cares, like in Dirck Hals’ “Merry Company on a Terrace” (1625). Others rich with symbols, such as Caspar Netscher’s “A Woman Feeding a Parrot, with a Page” (1666), are like short stories.

Most poetical is Clara Peeters’ “Still Life with Flowers Surrounded by Insects and a Snail” (c. 1610). The smallest work at only 7 inches offers a puzzle: Are the bugs attracted to the realistic flowers or are they part of the painting?

There is an ancient legend about Zeuxis, a painter whose grapes were so real that the birds tried to eat them. While many of these still-life paintings are breathtakingly realistic, Dutch artists went beyond that with contrasts, such as glistening red pomegranate seeds in the center of Jacob van Walscapelle’s “Still Life with Fruit” (1675), or the very dull-colored vegetables of Adriaen Coorte’s “Still Life with Asparagus and Red Currant” (1696). And yes, there is a discolored grape in the bunch to show what a painter could do!

At a time when paintings were part of a household and domestic life a recurring theme, one painting stands out in the collection for the stark contrast between the outdoor world with ships at sea and hunting scenes and the indoors where people dwelt.

In “A Nurse and a Child in an Elegant Foyer” (1663) by Jacob Ochtervelt, the two conflicting worlds are depicted side by side with a clear wall drawn between. The rich live in an orderly household while the poor, begging for handouts, crouch outside their doorway. The young boy, who is handing a donation, is dressed in a long, white robe, wearing a gold chain, likely a valued heirloom. His nurse holds his finger tip gently as she gazes with compassion at the needy. In contrast to the details inside of this well-appointed home, the beggars in drab-colored rags, are part of a vague outer world where their fate is unchartered.

Yet it would be noted that while well-being is so often portrayed, the average life expectancy was roughly half of what it is today.

Does art inform what we know of history or does history demand we view the conditions of the world outside of the artist’s studio? Moments shared in what were pleasant daily scenes in domestic households of another age, with its own problems and perils lurking, suggests both. These artworks offer a break from contemplating the grimmer moments of our time as they give refreshment on what the possibilities over time that art offers.

The current feature of the Christian Youth Theater, “Elf: The Musical,” is the perfect fit for both the holiday season and current times. Fami…

'Meet Me in St. Louis' arrives at Riverside Center for the Performing Arts

You’ve seen the Judy Garland classic on the big screen. And now, you can experience the magic locally onstage.

Adriaen Coorte’s ‘Still Life with a Hanging Bunch of Grapes, Two Medlars, and a Butterfly.’

‘An English Warship Firing a Salute’ (1673), oil on canvas by Willem van de Velde the Younger.