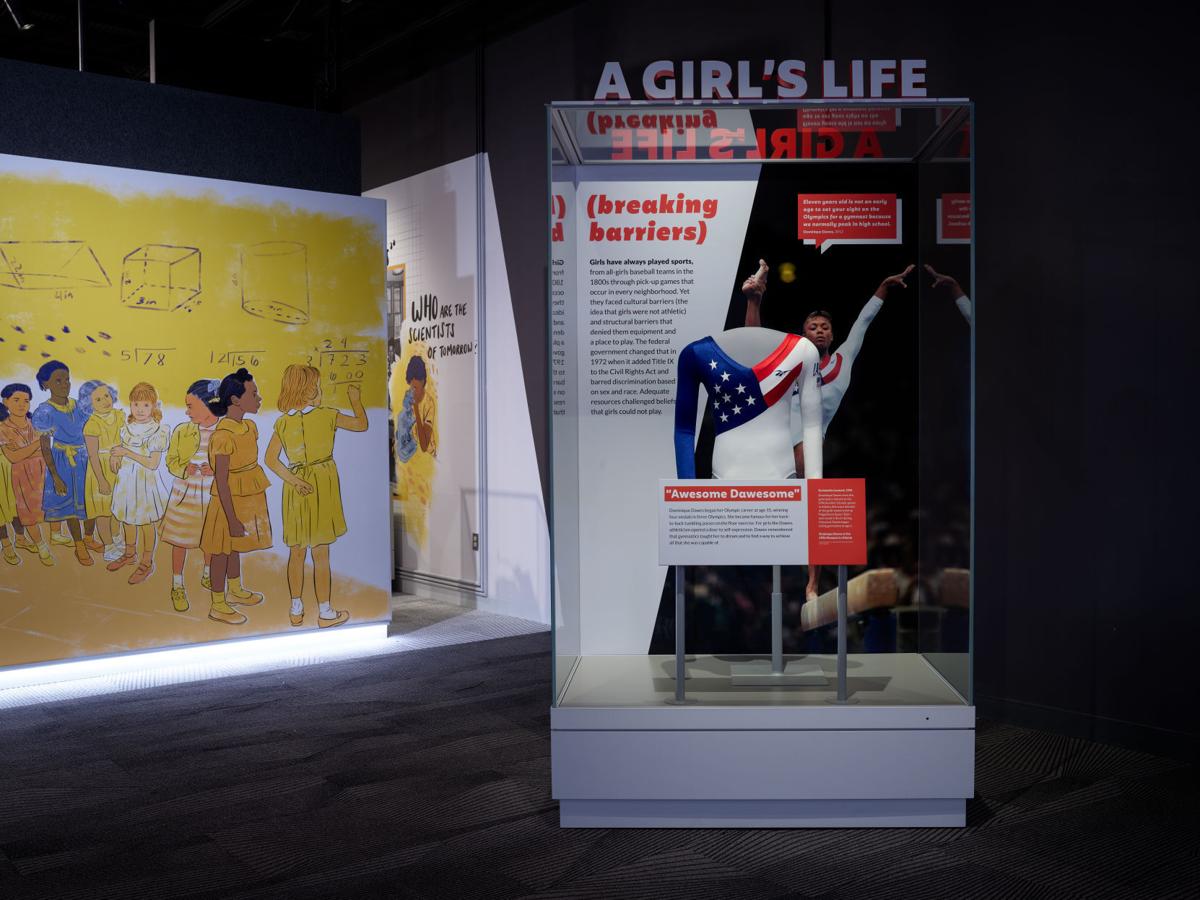 An Olympic leotard belonging to Dominique Dawes, a member of the ‘Magnificent Seven,’ is part of the exhibit. 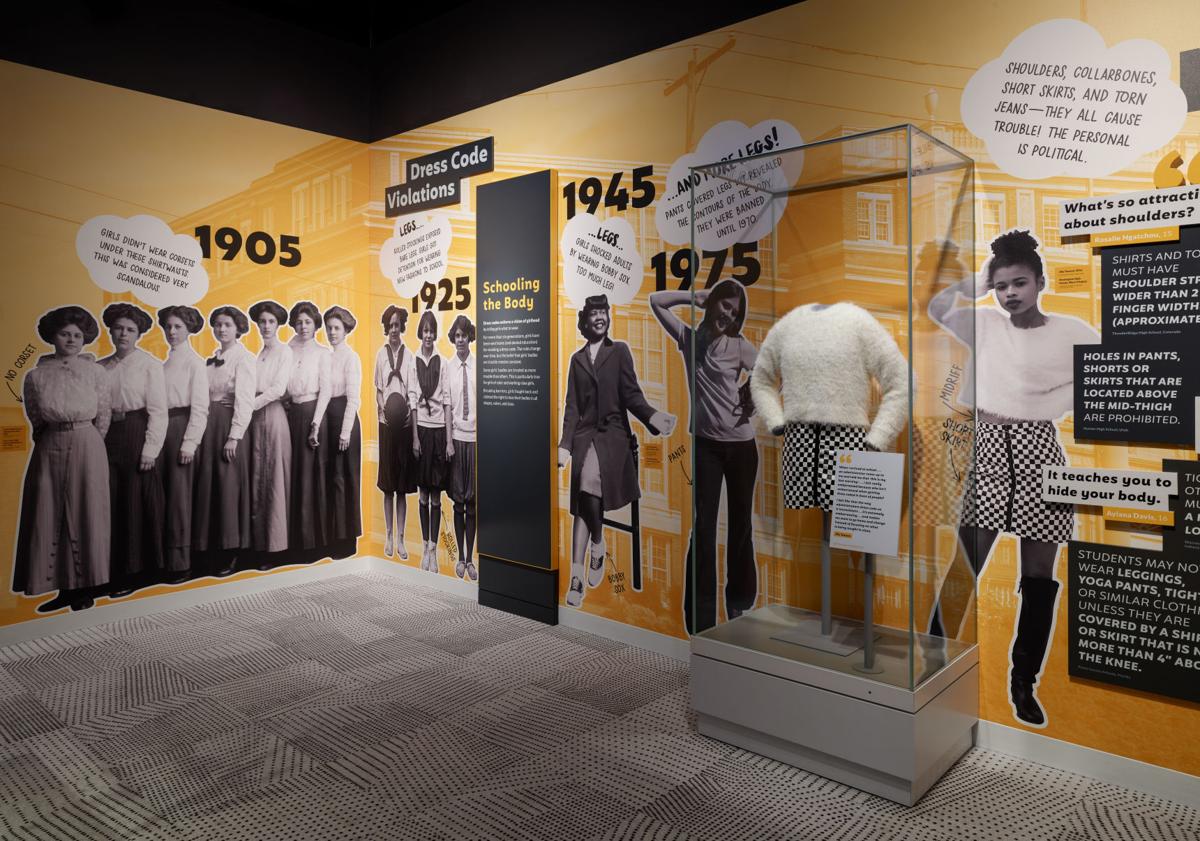 The exhibit showcases how girls have made an impact on all aspects of American life. 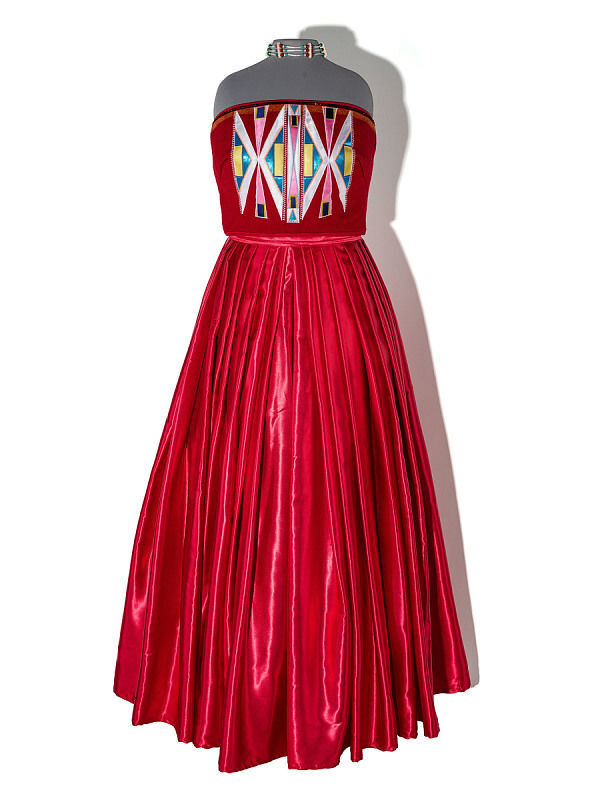 Isabella Aiukli Cornell’s prom dress is decorated with tribal insignia representing her citizenship in the Choctaw Nation of Oklahoma. 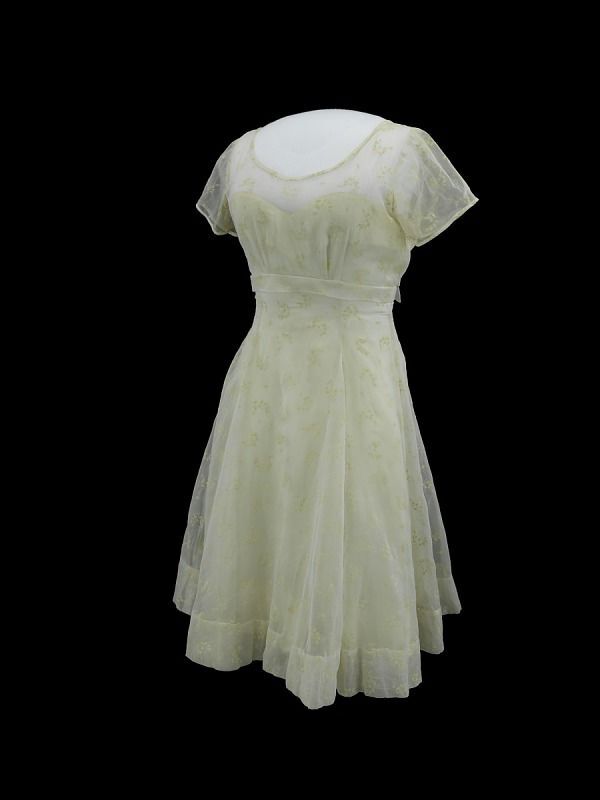 Minnijean Brown, one of the ‘Little Rock Nine,’ wore this dress to her graduation from the New Lincoln School in New York City in 1959.

Sometimes called “the Nation’s Attic,” the Smithsonian’s National Museum of American History preserves so many things that we might otherwise have thrown away or forgotten from our past. The exhibit “Girlhood (It’s Complicated),” which opened earlier this month, is filled with hundreds of such items. Yet this is far from a nostalgic trip to reminisce about the changes and challenges between childhood and early adulthood.

Objects have stories and so evoke memories and spark emotions. What this exhibit provides is those sometimes familiar and somewhat surprising reminders from over the last two centuries to serve as a framework for each visitor to meld their distinctly personal memories within the context of shared American history.

With a design inspired by zines, the 5,000-square-foot gallery opens with a short video in News and Politics (Girls on the Frontline of Change) before segueing into four broad themes. “Education (Being Schooled)” and “Work (Hey, Where’s My Girlhood?)” shows past history while presenting issues that resonate today. “Wellness (Body Talk)” explores the decades of the messages of how girls were expected to be, while a walk through “Fashion (Girl’s Remix)” shares how girls expressed themselves with cosmetics and clothing.

Old photographs and antiques abound. A Revolutionary War sampler created in 1781 by 13-year-old Betsy Bucklin expressed her defiance of Britain and faith in George Washington, then the commander of the Continental Army. Nineteenth-century portraits of domestic and factory workers depict women who had no childhood.

A Remington Noiseless Typewriter (1925-1930) harkens to when secretarial work became “women’s work.” Typewriters required dexterity and repetition, which many believed young women were better suited for as well as that they could be paid less.

A century of dress code violations for which girls were sent home from school and denied education is the backdrop for the display of Minnijean Brown’s graduation dress. Brown was one of the “Little Rock Nine,” who desegregated Central High in Little Rock, Ark., in 1957. She designed this graduation dress (1959) of which she would say, “It was a perfect fit, and I felt perfectly beautiful in it.”

A 3D sculpture of a tornado filled with advice books is one of the dozens of objects in “Wellness.” There is an 1850s “bloomer” gym suit, along with the 1951 Miss America tiara and scepter. It is noted that during her reign, Yolande Betbeze (née Fox) donned this tiara and scepter. However, she refused to wear the swimsuit saying, “I’m a singer, not a pinup.”

What they wore and what it meant is most vividly presented in “Fashion.” In the 1900s, comfortable shirtwaists would replace the earlier restrictive dresses. Some items like a 1920s flapper dress, in glittering silver sequins, are timeless for their glamour. Other items might solicit giggles in remembering that we might ever have worn that. By the 1960s, skirts were replaced with jeans. Clothes could be unisex or would incorporate fashion with political movements.

Most stunning is a red evening dress from 2019. Isabella Aiukli Cornell, a citizen of the Choctaw Nation of Oklahoma, used this prom dress to draw attention to systemic violence and abuse faced by indigenous women. The red color she chose is symbolic in solidarity for the Missing and Murdered Indigenous Women movement.

Throughout the exhibit are short biographical interactives, which feature girls who have spoken up, challenged expectations and been on the frontline of social changes. “A Girl’s Life (Breaking Barriers)” spotlights an Olympic gymnast Dominique Dawes. She was a member of the “Magnificent Seven,” who took home the gold at the 1996 Summer Olympics in Atlanta.

Unlike many museums which request silence when walking through, this exhibit encourages conversation about the people and the ideas behind these objects. At the very end of the exhibit, there is an area where visitors are invited to use social media to answer several questions posed at the exit using @amhistorymuseum and #GirlhoodHistory.

The museum has many thousands of objects to display and over the duration of the exhibit, some items will be switched out or replace others that might be more sensitive to lighting (like the fragile flapper dress).

The exhibit’s website provides more information and images for each area. A special feature is the detailed 3D scans of 20 rarely displayed fashion pieces, which were created from hundreds of photos of each costume. Unlike in-person viewing, this allows the public to zoom in to see the smallest details.

The exhibition will be at the National Museum of American History until Jan. 2, 2023, and then will tour the country through the Smithsonian Institution Traveling Exhibition Service from 2023-2025.

Also on display at the museum is “All Work, No Pay” (through 2021), which examines housework with aprons, house dresses and other costumes for domestic work from Colonial days to 1990, and “Creating Icons: How We Remember Woman Suffrage” (closes May 2, 2021), highlighting women’s achievements in winning suffrage.

If you’ve ever sat in the Byrd Theatre, looked around at the crystal chandelier and the Mighty Wurlitzer and wondered, where did this all come from?

As many theater stages remain dark due to the pandemic, Stage Door Productions has managed to work around the challenges by offering performan…

An Olympic leotard belonging to Dominique Dawes, a member of the ‘Magnificent Seven,’ is part of the exhibit.

The exhibit showcases how girls have made an impact on all aspects of American life.

Isabella Aiukli Cornell’s prom dress is decorated with tribal insignia representing her citizenship in the Choctaw Nation of Oklahoma.

Minnijean Brown, one of the ‘Little Rock Nine,’ wore this dress to her graduation from the New Lincoln School in New York City in 1959.