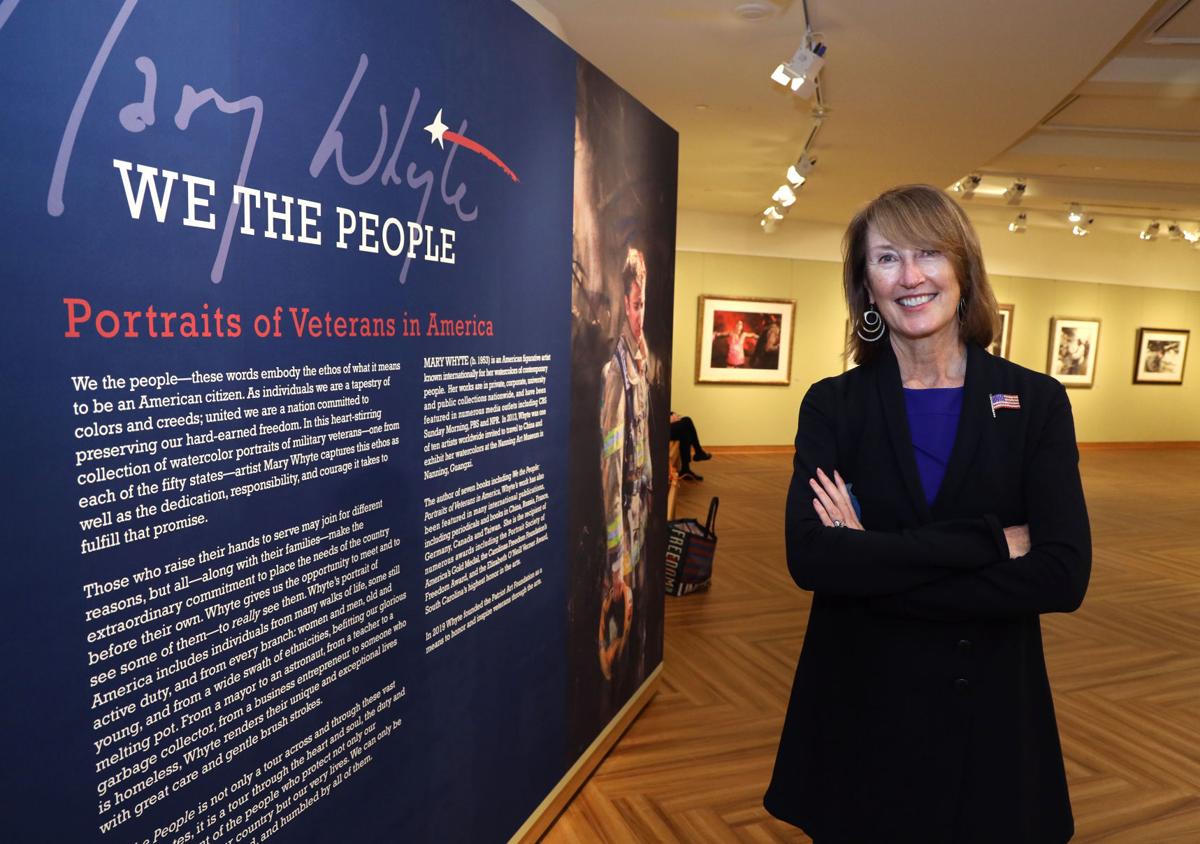 Mary Whyte painted 50 watercolor portraits of American veterans. Her exhibit is now open at the National Museum of the Marine Corps. 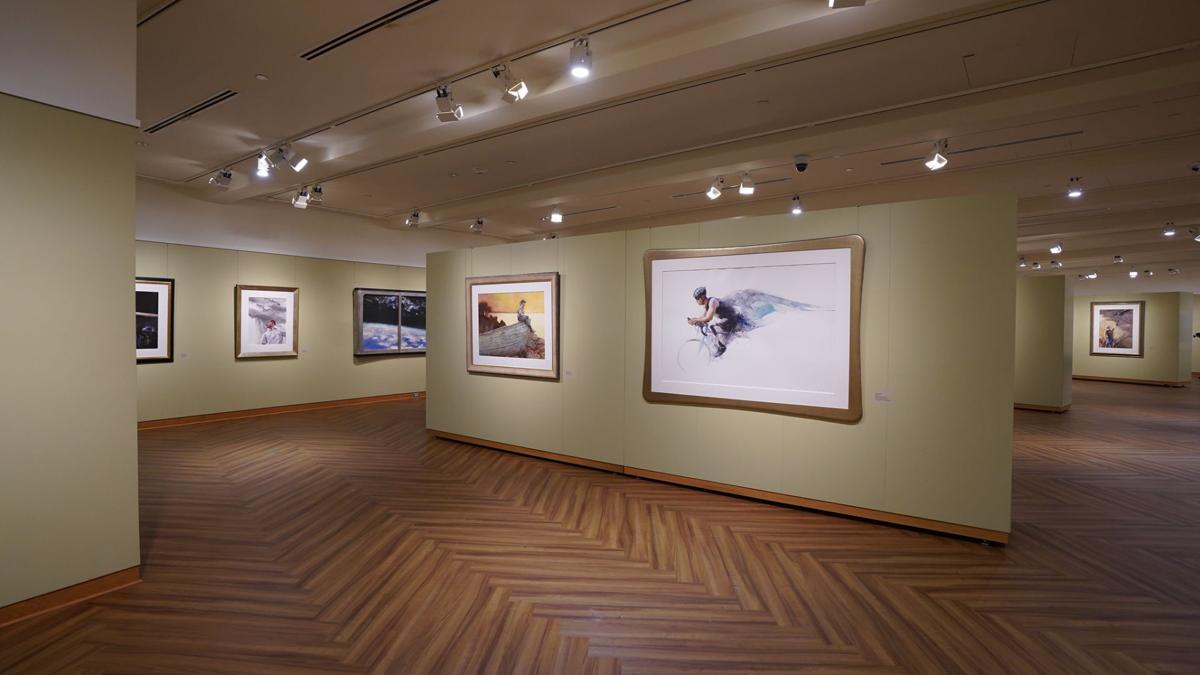 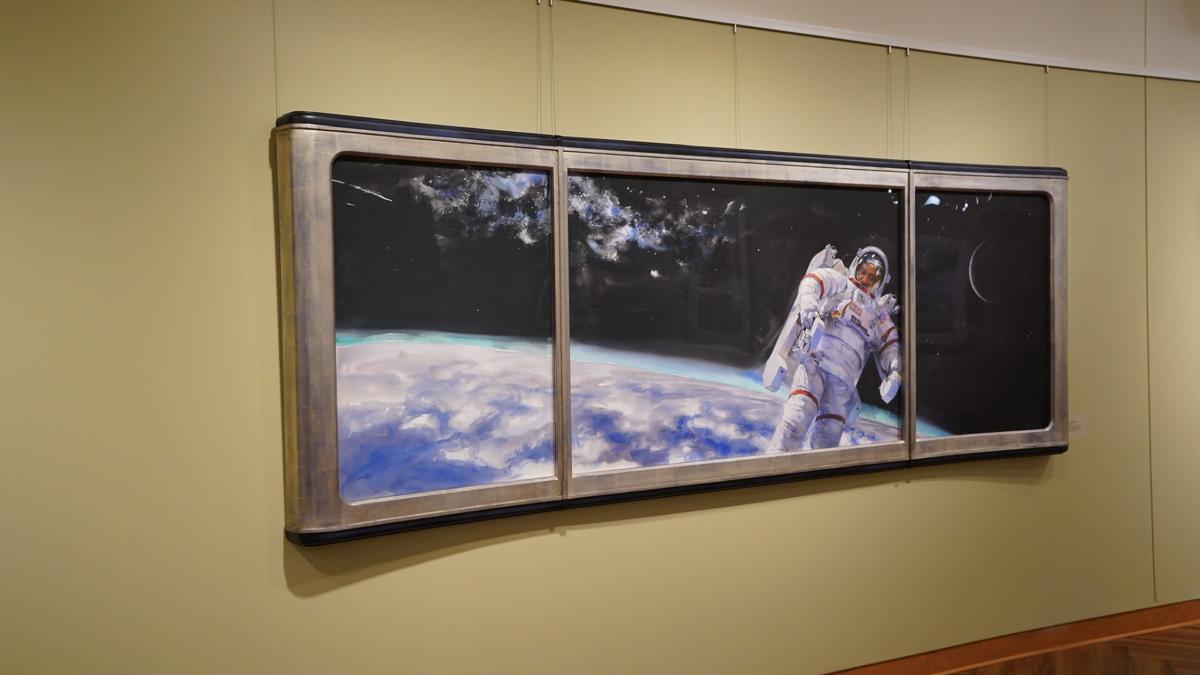 ‘WE THE PEOPLE: Portraits of Veterans in America’ runs until July 2022 at the National Museum of the Marine Corps. 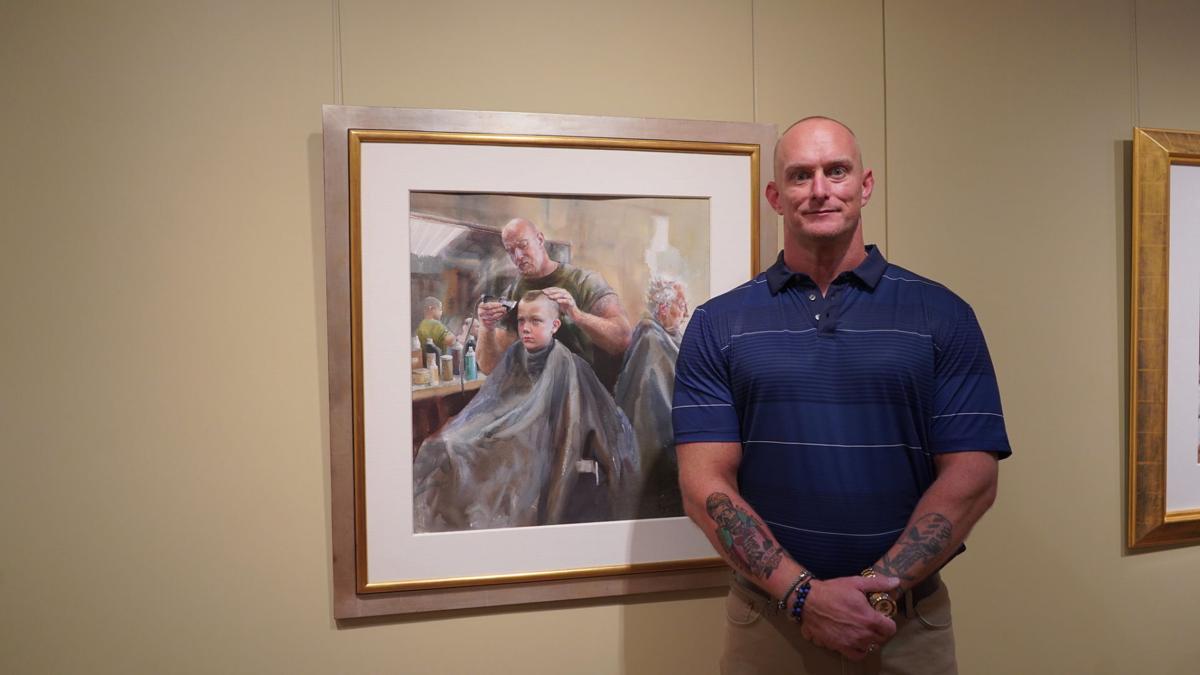 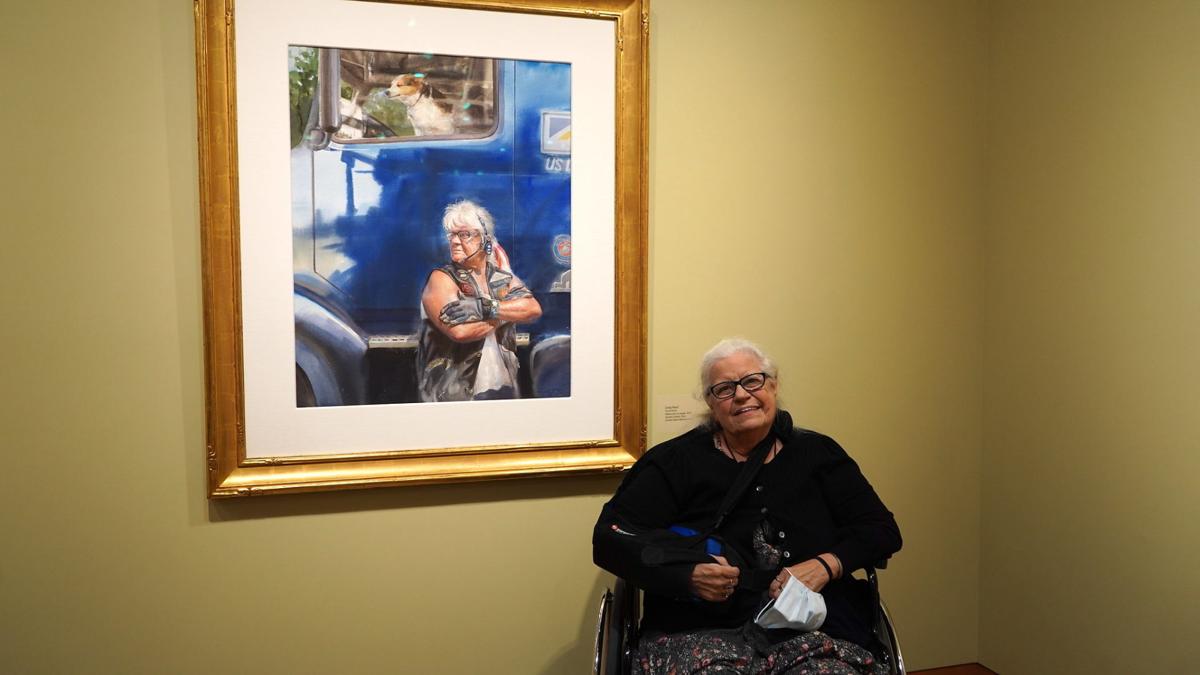 Sondra Eiche, a retired Ohio truck driver who served in the Marines, is the subject of Whyte’s painting ‘Long Haul.’ 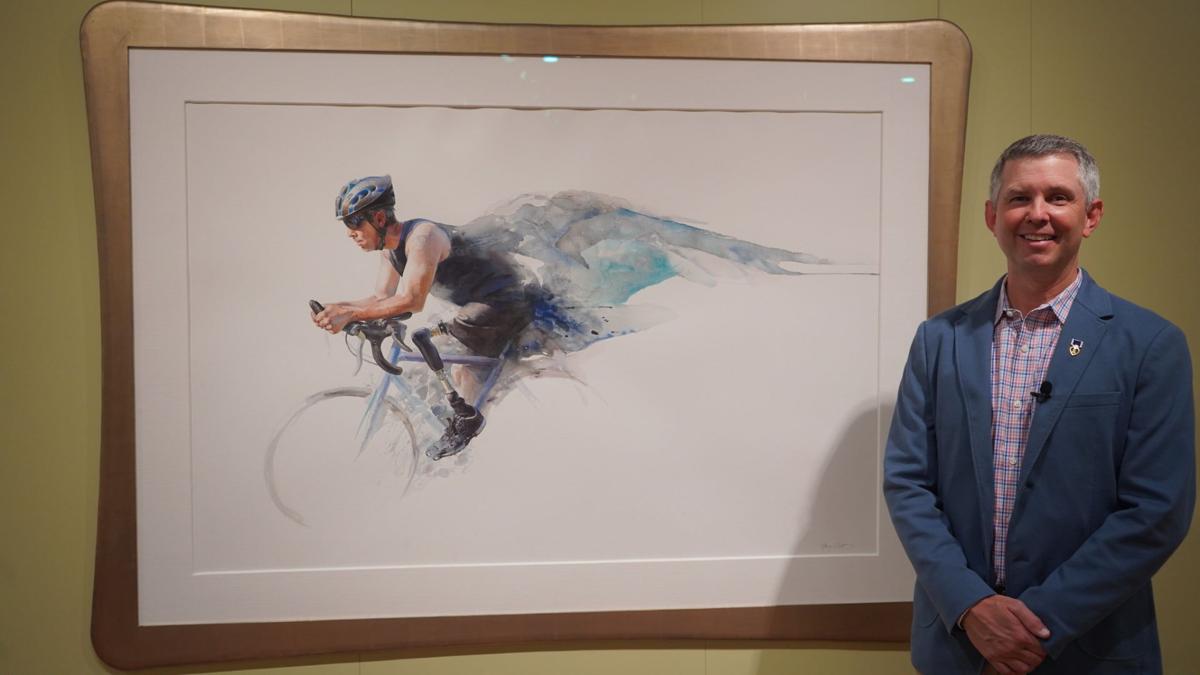 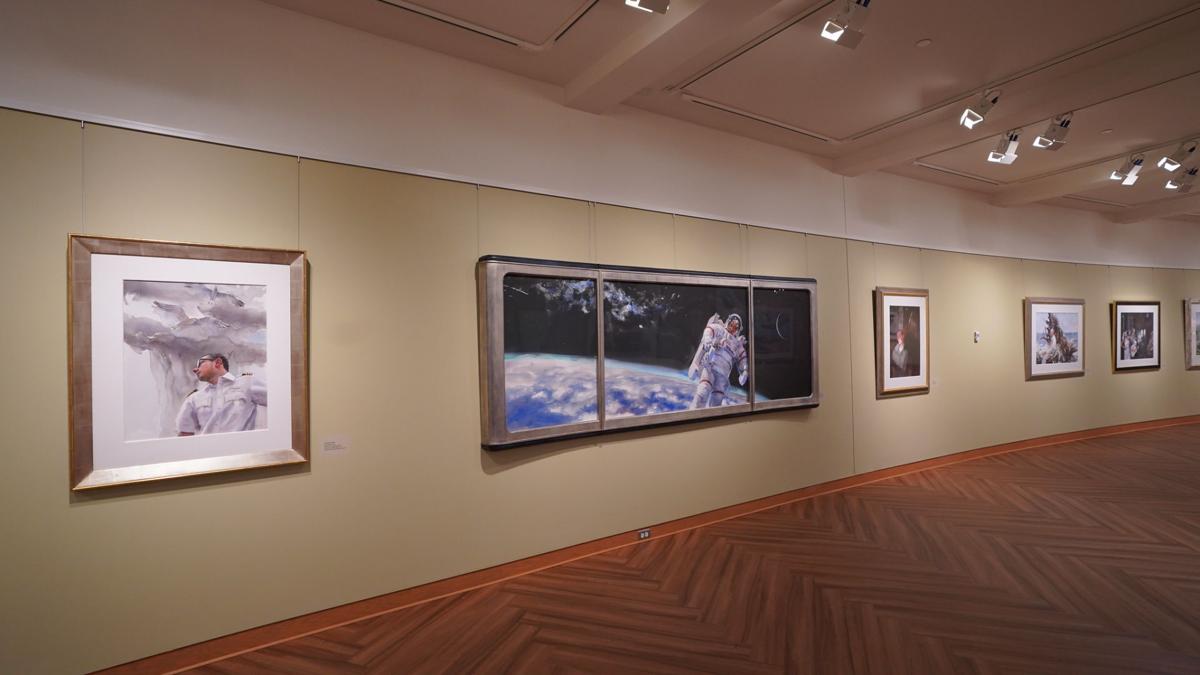 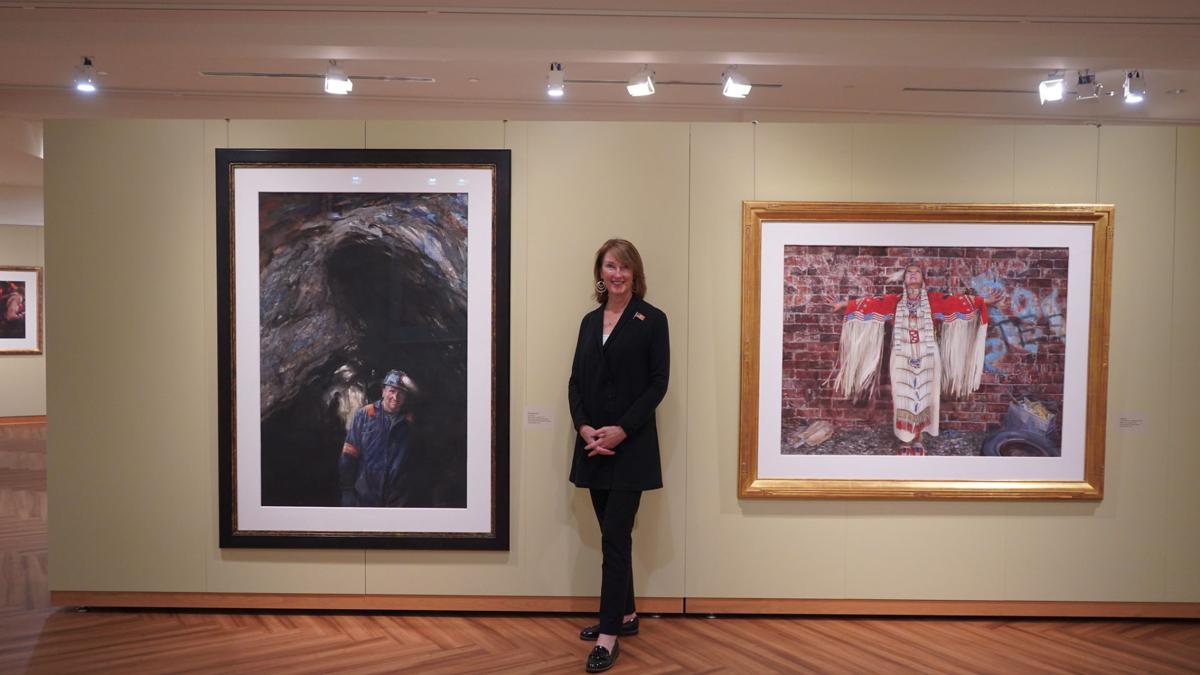 Mary Whyte’s project to capture images of veterans from all 50 states took her seven years. 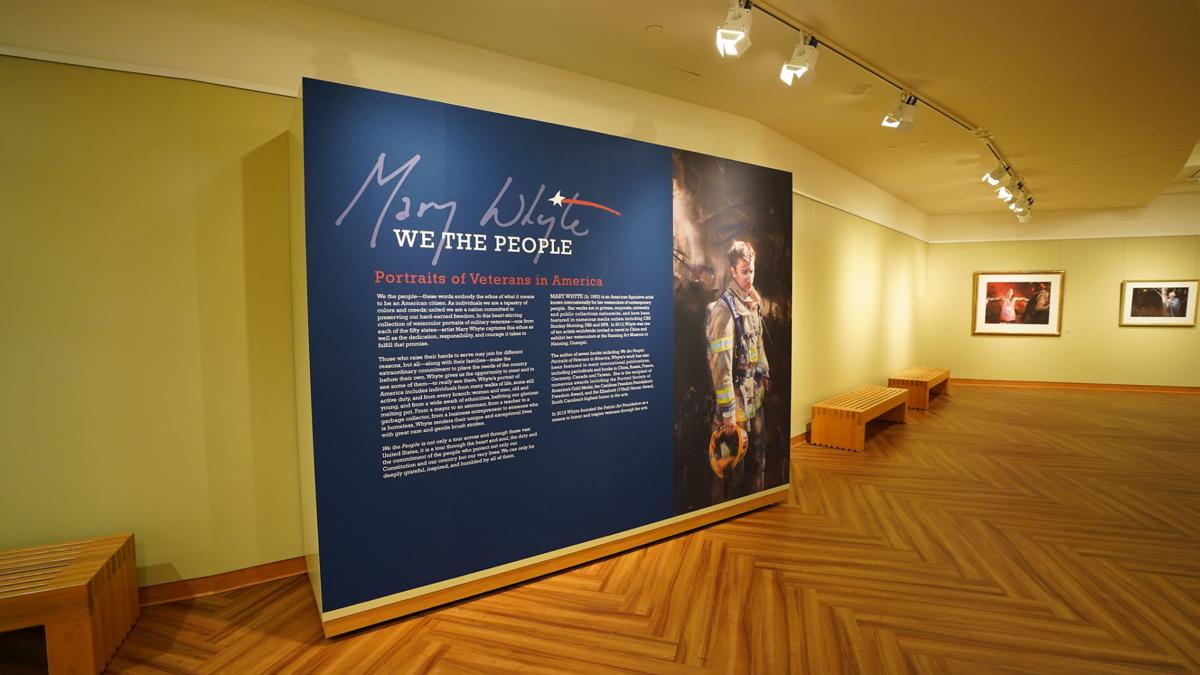 'We the People: Portraits of Veterans in America' will be on display through July 24, 2022, at the National Museum of the Marine Corps.

By MARK WALKER FOR THE FREE LANCE–STAR

Mary Whyte knew that her project “WE THE PEOPLE: Portraits of Veterans in America” would take a bit of time.

After all, her aim on the biggest project she’s ever undertaken was to paint a watercolor portrait of a veteran in every state and represent all branches of the service in doing so.

“I thought, ‘Why don’t I go to all 50 states for this portrait of America? I mean, how hard could that be, right?’ I knew it would take several years to do it, but I didn’t anticipate seven years,” said Whyte, whose finished collection is now on exhibit at the National Museum of the Marine Corps in Triangle.

Whyte said she wanted the project, which she worked on between teaching, painting commissioned portraits and running her gallery in Charleston, S.C., to show the real diversity of the United States. She chose veterans for their service.

Whyte found a coal miner, an astronaut, a Native American woman in full regalia, a singer, a lobsterman, a farmer, an aquarium zookeeper, a falconer, a clown, a painter, a rancher, a tattoo artist, a dairyman, a schoolteacher and a barber to round out the group of 50.

Whyte, who paints from photos, life, memory and her imagination, said she’s heard her work described as representational narrative, and accepts that as an apt description.

“I work from life as much as I can. That’s the best, but no one can stand there that long and look amused,” said Whyte, who imagined and painted the vastness of space behind her astronaut, put a rogue wave over her lobsterman and placed her firefighter in a burned-out forest.

“I imagine, what that would be like,” Whyte said of the waves, space, the forest and other settings where she placed some of her subjects.

Jason Bunting, a veteran Marine combat engineer, who has a tattoo on the inside of his right forearm that says, “Barber ’til I Die” is pictured cutting a young boy’s hair in Whyte’s piece “Manhood,” which includes an older man in a second barber chair.

“If you look at the tattoos, there’s so much detail, just the depth of it,” Bunting said at the show’s recent opening at the museum. “It’s got all levels of manhood and just the depth and detail is amazing.”

Bunting, who along with Whyte’s subjects, got a framed print of his portrait, said he is glad to have it for his future grandchildren and great-grandchildren.

“To have something depicting you doing what you’re passionate about, it doesn’t get much better,” Bunting said. “As long as it’s hanging somewhere they’ll be able to see me doing what I love to do. It’s just a great honor.”

Whyte, who found her subjects through small-town chambers of commerce and mayors, said she has heard the sentiment from other veterans she met doing the work which led to an “enormous appreciation” of what veterans have done for the country.

“I kept in touch with many of them. Several of them told me it really changed their life, because they never really felt particularly special, appreciated or honored for their time in the military,” Whyte said.

Ed Salau, a veteran Marine staff sergeant radio repairman, who now works for Marines Special Operations Command at Camp LeJeune, is pictured in Whyte’s “Archangel” pedaling his bicycle in profile with his prosthetic leg. An abstract, smoky form behind him suggests wings.

Salau, who joined the U.S. Army National Guard as a 1st Lieutenant after he left the Marine Corps, agreed to help Whyte within minutes of meeting her.

“It was the oddest thing I think I had ever been asked, and had no idea who Mary Whyte was, but I trusted the people who referred me to her, and I gave her a shot. I said, ‘Yes,’ after five minutes,” Salau said.

Salau and his wife, Dawn, love the painting.

“There’s something about looking at it and knowing that that’s how Mary Whyte saw me,” Salau said. “She was showing me that … not only was I trying to stay physically active and competitive, with a disability, but in my civilian job, I was helping Marines and veterans navigate a horrible bureaucracy, trying to get their benefits after they’ve experienced—sometimes more than what I did. It’s creative. It’s amazing.”

“I love it,” Dawn Salau said. “Seeing it in person is just breathtaking. I love what she’s done here to capture the faces of so many veterans.”

Gwenn Adams, the museum’s spokeswoman, said the museum is pleased to show the work, which will be on exhibit through July 2022.

“This is an absolutely wonderful exhibit to have here at the National Museum of the Marine Corps because it represents all veterans. There’s a painting of a veteran from each state, and what Mary has done is captured in that one portrait of one veteran is that kind of essence of all veterans,” Adams said.

“She is a world-renowned artist, and she’s published books. She teaches art, so this show is just an incredible exhibition to have in the Combat Art Gallery,” Adams said “We expect that it will bring in a different audience. It will bring in our veterans, but it will also bring in people that love art who may not normally come to the museum, because it’s not every day that they can get to see a show like this.”

Whyte said she hopes people who visit take away a greater appreciation and understanding of military and veterans.

“I learned that military veterans are as really impressive group of men and women that are truly dedicated to our country, what integrity and honor they have and what great examples they are to the rest of us. That’s the point. Our veterans are all around us. They’re such a part of our community.”

Richmond theater brightens up the winter season with 'A Doll's House, Part 2' at Virginia Rep, 'Come From Away' at Broadway in Richmond & more

Richmond-area theaters will be brightening the dark days of winter with exciting and fresh productions on stage. From a new take on the Henrik Ibsen play “A Doll’s House, Part 2” at Virginia Rep to “Come From Away,” an inspiring musical based on the Sept. 11 attacks, here’s what we’re looking forward to this season:

Featuring hundreds of photographs by 120 women from 20 countries from the 1920s through the late 1950s, National Gallery of Art’s “The New Wom…

The pandemic may have delayed the Kennedy Center opening of “Ain’t Too Proud,” but it can’t diminish the vibrant spirit of this jukebox musica…

The cast and crew of Stage Door Productions, Inc. is set to present eight one-act plays by different playwrights this weekend.

Mary Whyte painted 50 watercolor portraits of American veterans. Her exhibit is now open at the National Museum of the Marine Corps.

‘WE THE PEOPLE: Portraits of Veterans in America’ runs until July 2022 at the National Museum of the Marine Corps.

Sondra Eiche, a retired Ohio truck driver who served in the Marines, is the subject of Whyte’s painting ‘Long Haul.’

Mary Whyte’s project to capture images of veterans from all 50 states took her seven years.

'We the People: Portraits of Veterans in America' will be on display through July 24, 2022, at the National Museum of the Marine Corps.