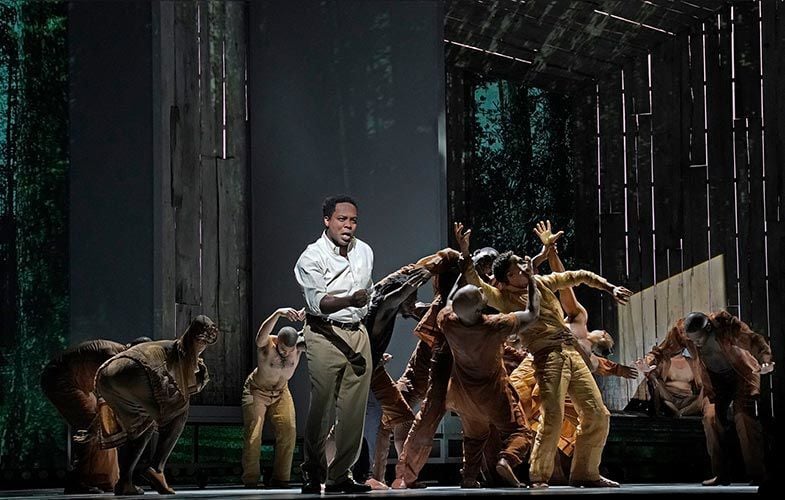 Will Liverman in a scene from ‘Fire Shut Up in My Bones,’ an operatic adaptation of Charles M. Blow’s memoir. James Robinson and Camille A. Brown co-direct the production.

Each night for over a year while the opera stage was dark, the Metropolitan Opera streamed a different production on its website. The free Nightly Met Opera Streams reached its grand finale in July, after 70 weeks, 112 different operas, and more than 21.2 million views from 152 countries around the world. Some performances were classics, highlighting stars like Luciano Pavarotti, Joan Sutherland, Renata Scotto and Beverly Sills. (Met Opera on Demand is available for those who wish to see different productions from the Met’s online collection of over 700 full-length recordings.)

But if you think you have seen it all, you haven’t seen what is coming yet with the 2021-22 season!

The mix of new productions, as well as old classics, continues the tradition of opera expressing universal human experiences of love, tragedy and death through music and staging.

Opening night will be a historic occasion.

The Met’s premiere of “The Fire Shut Up in My Bones,” based on Charles M. Blow’s memoir of a young Black man’s journey through trauma and hardship, is the first opera by a Black composer presented on the Met stage. The operatic adaptation is by the Grammy–winning jazz musician and composer Terence Blanchard, with a libretto by filmmaker Kasi Lemmons. James Robinson and Camille A. Brown, two of the creators of the Met’s sensational recent production of “Porgy and Bess,” co-direct this new staging. Brown, who is also the production’s choreographer, becomes the first Black director to create a mainstage Met production.

This “opera in jazz” adaptation of the New York Times columnist’s bestselling memoir employs a variety of musical approaches to this redemptive narrative of his wretched experiences of growing up in an out-of-time African–American Louisiana town.

Two new operas this season will be based on very old stories.

Shakespeare’s “Hamlet” is over 400 years old. At least 40 composers have attempted to create an opera about this truly operatic tragic character. Even the great Giuseppe Verdi, who brought to the opera stage “Macbeth” and “Othello,” passed on “Hamlet.” The most recent “Hamlet” performed at the Met is the 19th-century favorite by Ambroise Thomas.

Australian composer Brett Dean now brings “Hamlet” into the 20th century. Many of the original cast members from its premiere at England’s Glyndebourne Festival in 2017 will be in the Met production in June 2022.

“Eurydice” is a very old myth constantly reimagined—from Ovid’s “Metamorphoses” 2,000 years ago to video games today. Since Orpheus brings his love Eurydice back to life from the underworld with his music, the subjects are an irresistible theme for musical compositions. The list of at least six dozen composers who have created works celebrating the mythological duo reads like a musical who’s who list.

What’s different in the Met premiere from composer Matthew Aucoin and playwright Sarah Ruhl’s new opera, is that this classic tale is presented from Eurydice’s point of view. Immersive new staging by Mary Zimmerman gives it the perfect touch.

If there was a list of the most frequently performed operas on world stages, it would be topped by works of Verdi, Giacomo Puccini, Richard Strauss and Gaetano Donizetti.

Will Liverman in a scene from ‘Fire Shut Up in My Bones,’ an operatic adaptation of Charles M. Blow’s memoir. James Robinson and Camille A. Brown co-direct the production.