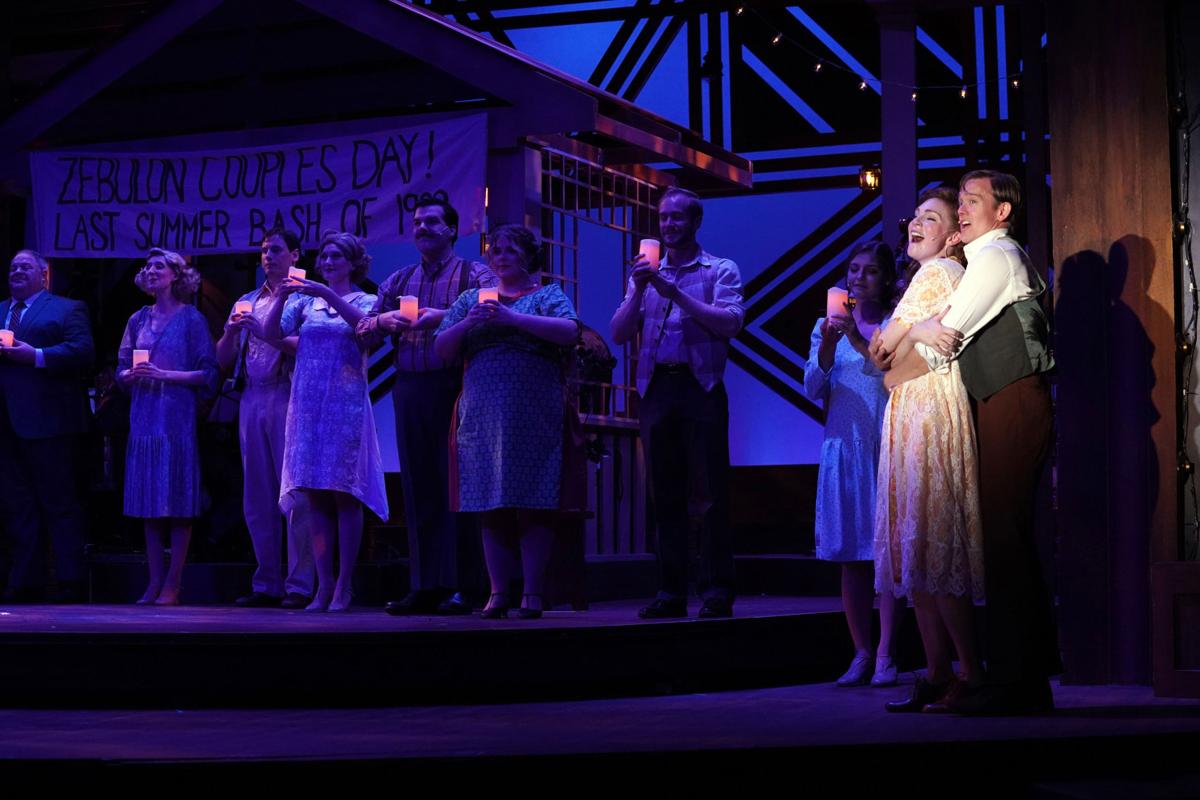 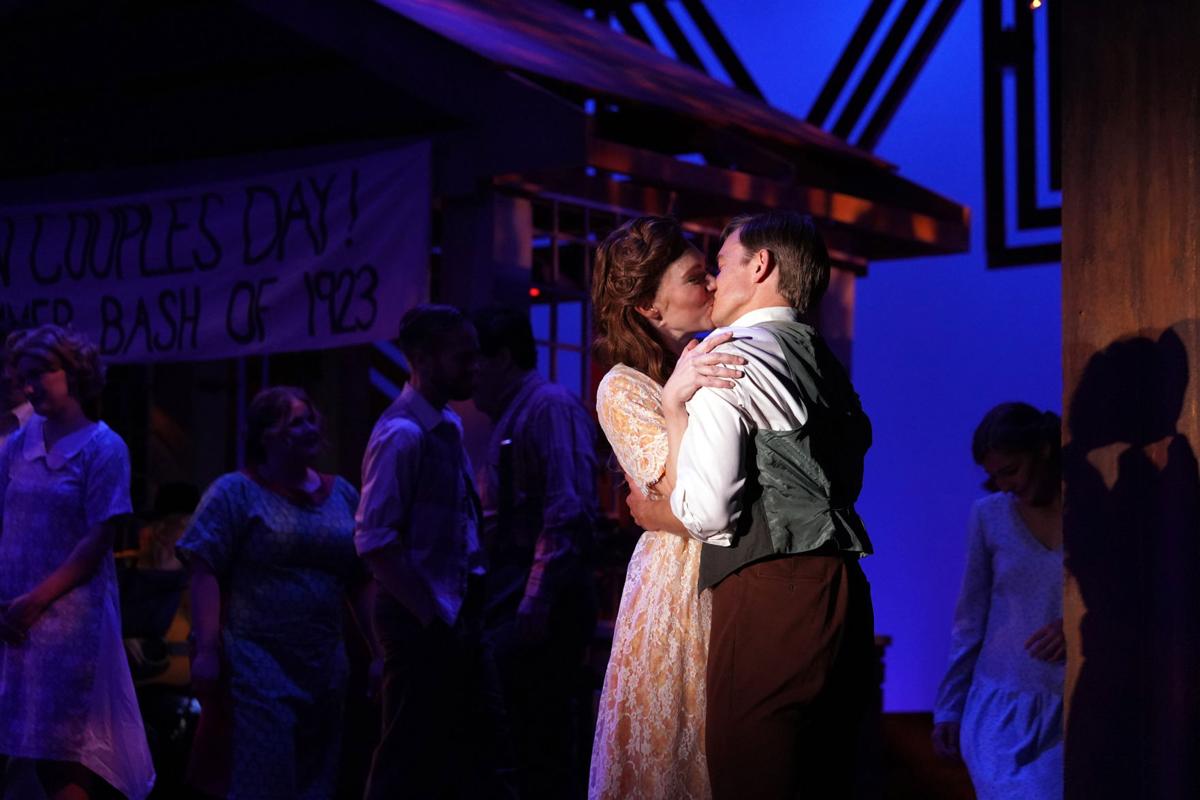 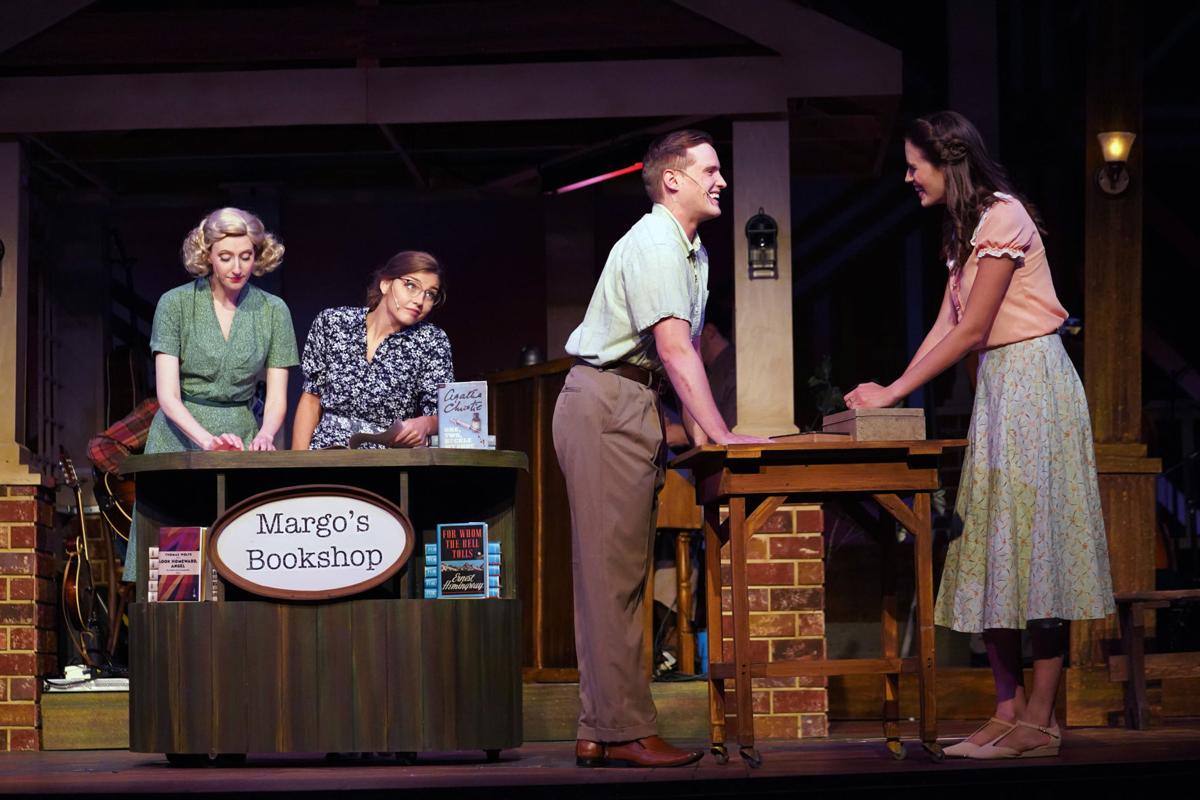 Danny Martin as Billy Cane appears with Evan Bertram as Margo Crawford, as Stephanie Wood as Florence and Colleen Kleveno as Edna look on. 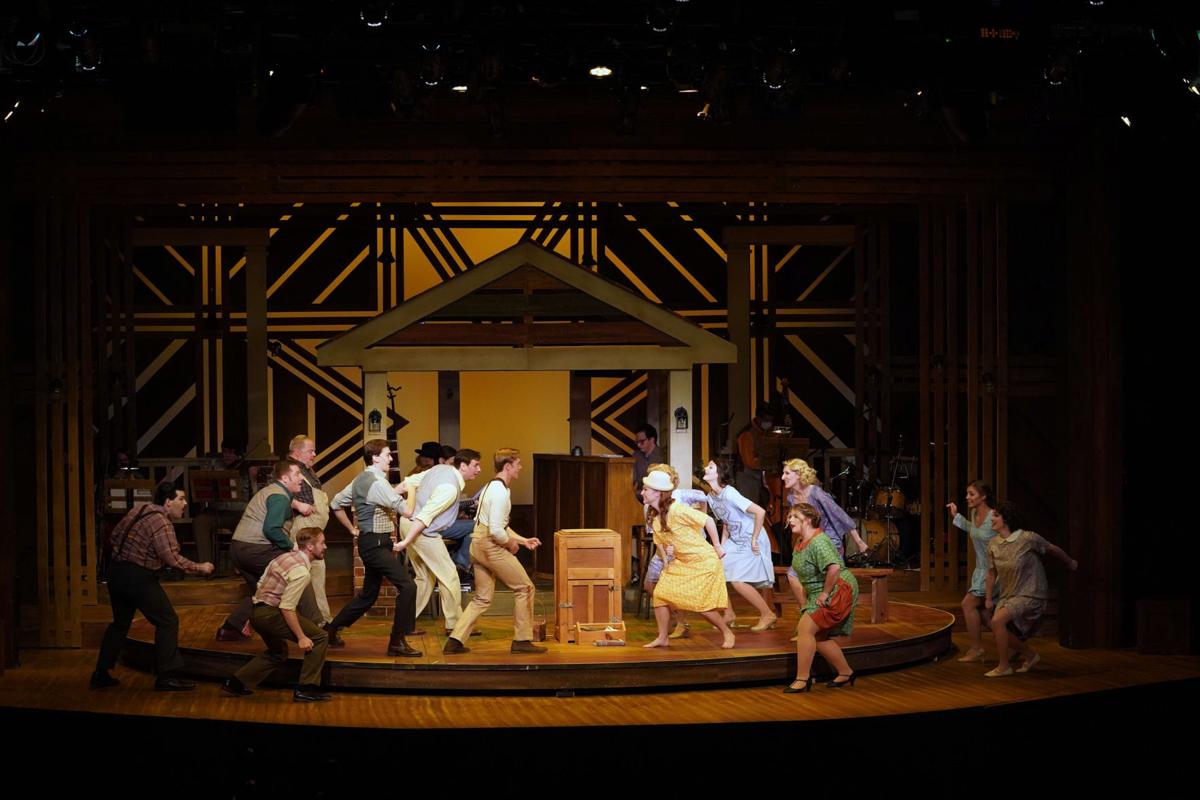 By GAIL CHOOCHAN THE FREE LANCE-STAR

After months and months of waiting in the wings, it’s safe to say that “Bright Star” was worth the wait. Steve Martin and Edie Brickell’s feel-good bluegrass musical is finally getting its chance to shine at the Riverside Center for the Performing Arts, and it is absolutely beaming with talent.

The Tony-nominated musical, which also enjoyed a brief run at the Kennedy Center, is giving local audiences an opportunity to experience this sweeping story about love and redemption, heartbreak and hope.

Set in 1940s North Carolina, “Bright Star” revolves around Alice Murphy, one of Asheville’s top literary editors whose own story is quite a page-turner, and her connection with Billy Cane, a young soldier who has just returned from the war. After meeting the aspiring writer and taking a chance on him, Alice begins to reflect on her past growing up in a small town, her first love, Jimmy Ray, as well as the darkest chapter of her life. In the beautifully staged number “Way Back in the Day,” Alice brings audiences with her back to Zebulon as she seamlessly transitions from a buttoned-up professional to a spirited barefoot teenager—her voice soaring as she shares her happier beginnings.

Riverside has assembled a terrific cast and orchestra to take on Martin and Brickell’s Appalachian tale, which was inspired by a true event. (It’s better not to reveal too much detail so you can experience this wallop of a story yourself.)

With one of the biggest voices in the cast, Adrianne Hick is a radiating presence onstage as she balances her portrayal of adult Alice and young Alice in flashbacks. She successfully conveys the carefree innocence of youth, as well as the pain from unspeakable loss and the strength to keep going.

As Jimmy Ray, Douglas Ullman Jr. delivers a strong performance as the mayor’s son who doesn’t want to follow in his footsteps and step out on his own outside of Zebulon. He shares great chemistry with Hick’s Alice, whether they’re singing the flirtatious number “Whoa, Mama” or the powerful tear-jerker “I Had a Vision,” about what their life could have been like. His song “Heartbreaker,” during an emotional father-and-son scene, is one of the show’s most searing moments.

Danny Martin as Billy and Evan Bertram as his childhood friend Margo, who’s been harboring feelings for him, share some charming moments in a parallel but much lighter storyline. While Margo’s fully supportive of him chasing his literary dreams in the big city, she’s hoping he’ll come back home to her.

“Bright Star” is filled with plenty of ear-pleasing musical gems, from Margo’s sweetly sung ballad “Asheville” (one of my favorites) to Jimmy Ray and Alice’s moving duet “What Could Be Better” to the fun toe-tapping bar song “Another Round.”

The music, featuring orchestrations by August Eriksmoen, is such a big player in this production that it is wonderful to see the musicians alongside the performers. Music director and keyboardist Carson Eubank, Mark Barnett on banjo/guitar and Brad Gunson on guitar/mandolin are prominently on display in a cabin on a revolving stage, with other musicians seated on both sides.

Frank Foster’s rustic set design holds many neat details, such as the miniature train moving along a railroad track above the stage and drop-down screens, and the townsfolk holding flickering candles looks pretty at night in Michael Jarett’s lighting design.

With Patrick A’Hearn’s tight and loving direction, Riverside’s “Bright Star” is a piercing reminder of what theater audiences all over have been missing out on during the pandemic and live theater’s power to move people’s hearts.

Danny Martin as Billy Cane appears with Evan Bertram as Margo Crawford, as Stephanie Wood as Florence and Colleen Kleveno as Edna look on.