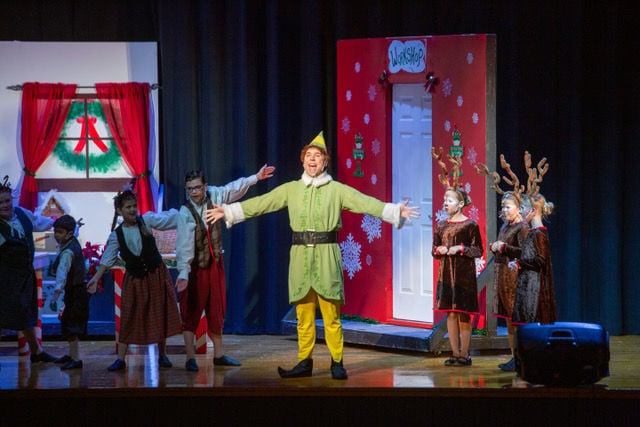 Buddy (Luke Dufilho) happily sings at the North Pole with his elf and reindeer friends. Christian Youth Theater will have its final performances of ‘Elf: The Musical’ this weekend. 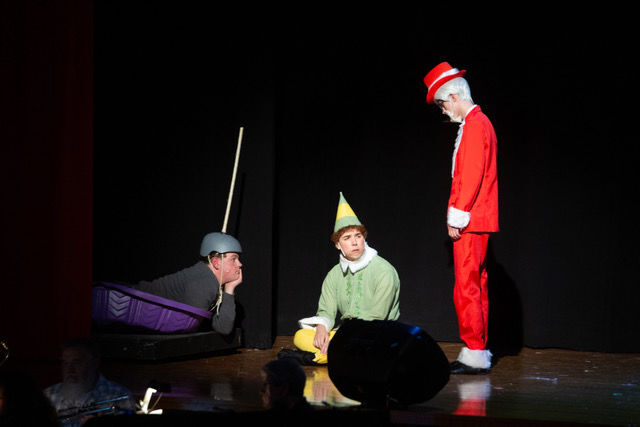 Buddy shares his woes with Santa (Peter Weiss) and Mr. Narwhal (Max Adler) after finding out his true identity. 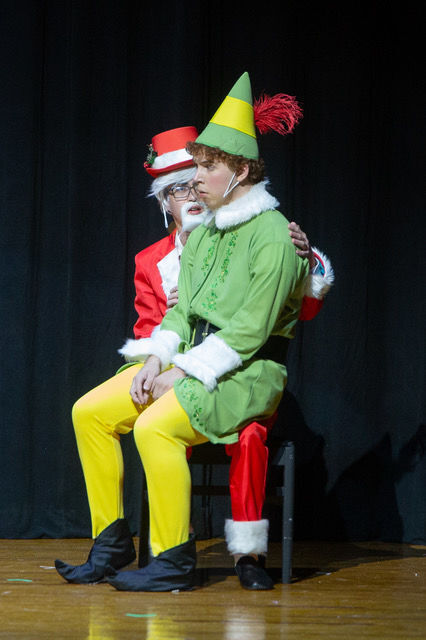 Santa (Peter Weiss) explains to Buddy (Luke Dufilho) the truth about his father, who lives in New York City.

Buddy (Luke Dufilho) shares his love of joy and Christmas with Jovie (Isabelle Schweiter), the store manager (Kendra Long), and the rest of the Macy's crew in a lively song and dance number. 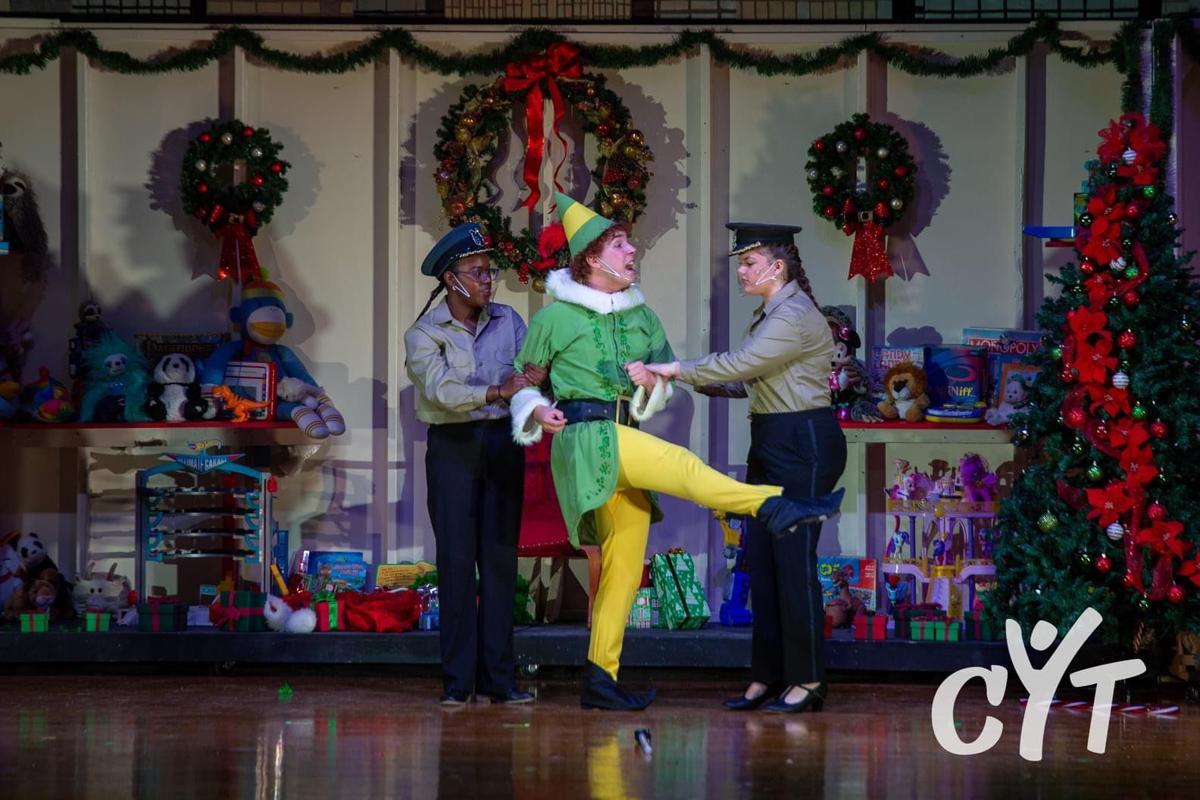 Security guards (Aniyah Lee and Hannah Daily) take Buddy (Luke Dufilho) into custody after he fights with the Macy's Santa to prove he's a fake.

The current feature of the Christian Youth Theater, “Elf: The Musical,” is the perfect fit for both the holiday season and current times. Families who take the opportunity to experience a performance of this beloved, iconic Christmas tale will leave with a big smile, a treasured shared memory, and a message of the resilient power of hope and positivity.

As the action onstage unfolds, we see that, among all the elves busily preparing gifts for Santa’s bag on Christmas Eve, it’s apparent that one named Buddy is a bit “special.” Not only does he tower above the others, but his human hands are a bit slower than the nimble fingers of the others. When Buddy (Luke Dufilho) overhears two of his little counterparts talking about his origins, he approaches Santa (Peter Weiss), who tells him how he came to North Pole. He recounts that fateful Christmas Eve long ago when, as a curious little orphaned toddler, Buddy crawled into Santa’s bag and inadvertently was whisked away to the Clauses’ home.

Realizing that his birth father is living somewhere in the lands below, Buddy sets out on a quest to find him. Santa provides him with a guiding token, a snow globe with a replica of the Empire State Building, the site of the book-production office of his father, Walter Hobbs (Giancarlo Santiago).

Nothing could be further from the cozy comfort and camaraderie of Santa’s workshop than the fast-paced competitive arena of New York City, and Buddy will need every ounce of his buoyant hope and resilient innocence to deal with such disappointments as a Macy’s store “Santa” (Max Adler), whom Buddy righteously reveals as a fake who “doesn’t smell like Santa but like beef and cheese.” But the toughest realization of all that he must come to grips with is his father’s rejection of him and his banishment, after he guilelessly derails his dad’s mercenary enterprise at the cusp of a rising demand of consumers for Christmas story books.

But Buddy’s unbridled joy, hope and optimism cannot be quenched. His uplifting spirit is nourished by Walter’s secretary Deb (Sierra McKinley), who is tasked with keeping him preoccupied and introduces him to a fascinating “snow machine” (the office paper shredder). By far, the greatest support for Buddy’s journey in the Big Apple is Jovie (Isabelle Schweiter), a good-hearted “elf” on the Macy’s staff, who becomes both his trusted friend and loving partner.

“Walter Hobbs’ transformation to a loving husband and caring father comes about as he witnesses the undeniably uplifting impact that Buddy has on his wife (Erin Smith), his son (Matthew Buadu), and all his office workers, who come to embrace the Christmas spirit,” said Rachel Hunter, chapter coordinator of CYT Fredericksburg. “Walter realizes that he has put too much focus on his job and that spending time with the ones you love is important and that having fun sometimes is necessary.”

While the CYT production includes the film’s classic one-liners and iconic moments (such as the amiable narwhal at the North Pole who bids goodbye to Buddy and wishes him luck on his quest), it also provides a few unique elements for this stage version. A new treat in this version is a restaurant scene in which Buddy encounters a despondent crew of store Santas, recuperating from their work shifts, who commiserate and share their woes in a song- and-dance number titled “Nobody Cares About Santa.” And the allure of New York City is epitomized in a scene depicting Jovie and Buddy’s date in which they view the skaters who whizz around the Rockefeller Center’s rink.

The Broadway quality of this musical is evidenced in the exceptional vocalists, under the tutelage of music director Pam King; a talented orchestra playing jazzy show tunes; and fascinating dancers, whose talents were honed by choreographer Vilma Gil. And hats off to director Keri Church, who identified the perfect actors for the leads and sharpened the skills of a cast of 57 young actors.

“In casting Buddy, Keri was looking for a person who, like the character, embodies his innocence and childlike joy, and Luke definitely has that energy and vibe about him,” said Hunter. “But it’s also interesting that Giancarlo, who plays Walter Hobbs, is definitely not like that character. He is very sweet and so kind and appreciative of everyone. His convincing portrayal of Walter is a testament to his acting ability.”

Audience members and cast and crew alike join in a heartfelt celebration of the Christmas spirit in “A Christmas Song” during the climax of a Central Park scene. And viewers will experience yet one more touching moment in a postscript scene, in which Buddy and Jovie bring their newborn baby to the North Pole to introduce him to Santa.

“When Keri spoke about her vision as the director of this show, she talked about the power of its message of hope and renewal,” said Hunter. “She said that, in a sense, the pre-transformation absence of the Christmas spirit can be seen as a symbol of the hardship and isolation of the pandemic, and the revitalization of life and spirit among all represents the joy and hope that is always available to us.”

What was Meghan Markle’s first impressions of Kate Middleton?

What was Meghan Markle’s first impressions of Kate Middleton?

Madonna gets her third tattoo, completing her tattoo trilogy

Madonna gets her third tattoo, completing her tattoo trilogy

'Meet Me in St. Louis' arrives at Riverside Center for the Performing Arts

You’ve seen the Judy Garland classic on the big screen. And now, you can experience the magic locally onstage.

Escape to "Clouds, Ice, and Bounty" at the National Gallery of Art

"Clouds, Ice, and Bounty: The Lee and Juliet Folger Fund Collection of Seventeenth-Century Dutch and Flemish Paintings" is a retreat where we as guests can share viewing paintings that were once seen by few besides family and friends in private homes.

Mary Whyte's "We the People," featuring watercolor portraits of veterans of all ages from all 50 states, is on display through July 2022 at the National Museum of the Marine Corps' Combat Art Gallery.

Buddy (Luke Dufilho) happily sings at the North Pole with his elf and reindeer friends. Christian Youth Theater will have its final performances of ‘Elf: The Musical’ this weekend.

Buddy shares his woes with Santa (Peter Weiss) and Mr. Narwhal (Max Adler) after finding out his true identity.

Santa (Peter Weiss) explains to Buddy (Luke Dufilho) the truth about his father, who lives in New York City.

Buddy (Luke Dufilho) shares his love of joy and Christmas with Jovie (Isabelle Schweiter), the store manager (Kendra Long), and the rest of the Macy's crew in a lively song and dance number.

Security guards (Aniyah Lee and Hannah Daily) take Buddy (Luke Dufilho) into custody after he fights with the Macy's Santa to prove he's a fake.