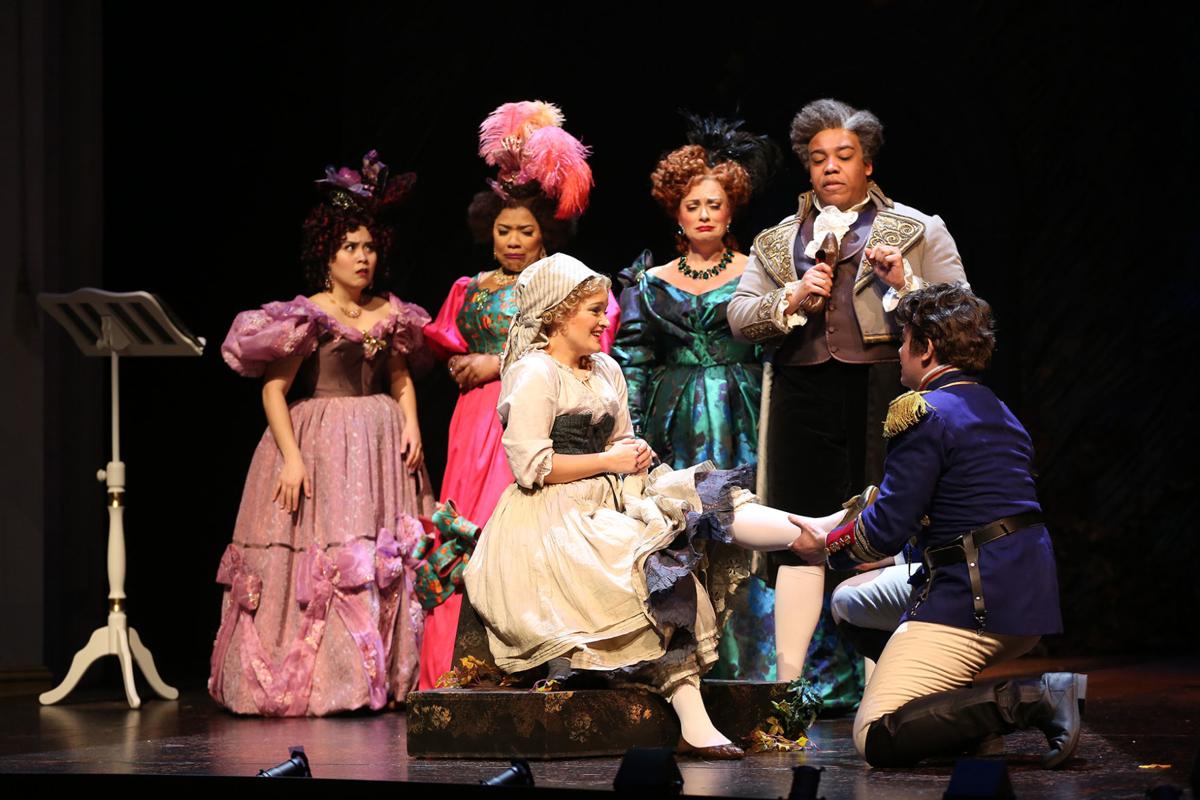 Cinderella (Erin Driscoll) is one of many fairy tale characters frolicking about in Stephen Sondheim and Jame Lapine’s beloved musical ‘Into the Woods.’ 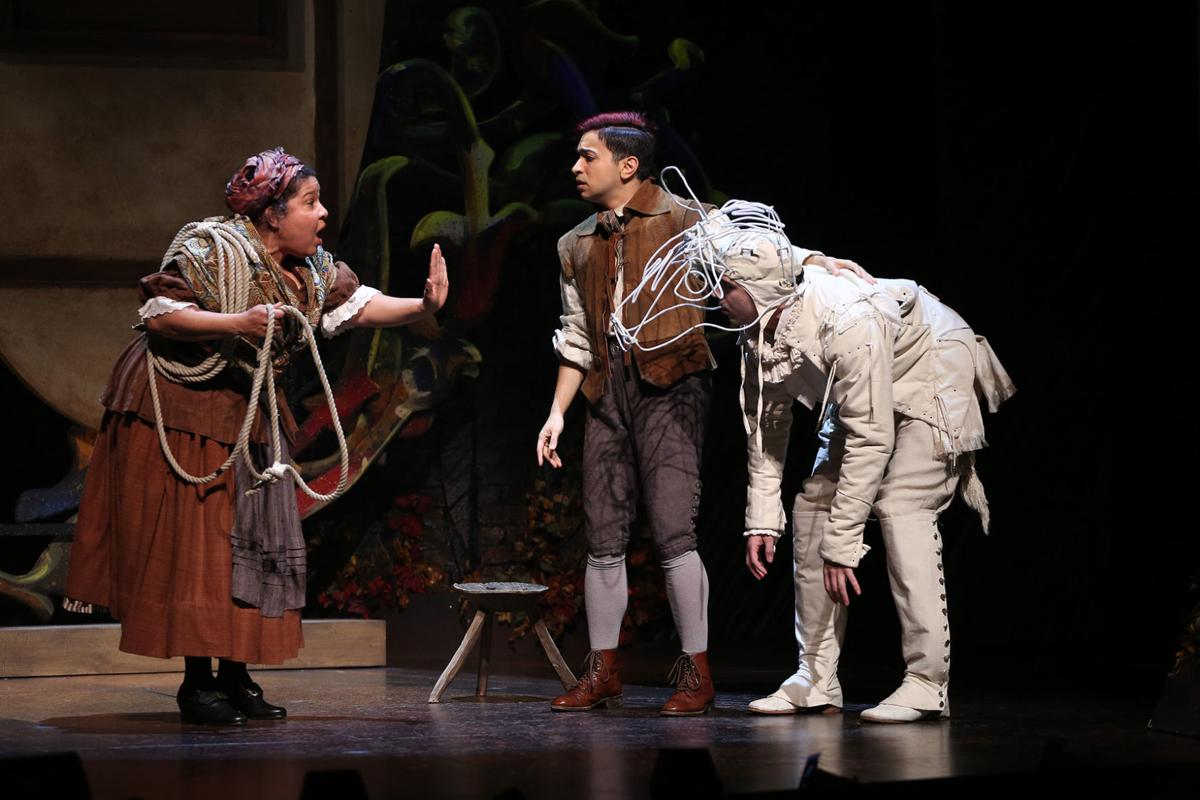 Rayanne Gonzales as Jack’s Mother, Samy Nour Younes as Jack and Tiziano D’Affuso as Milky White in the Ford’s Theatre production of “Into the Woods,” directed by Peter Flynn, choreographed by Michael Bobbitt and music direction by William Yanesh. 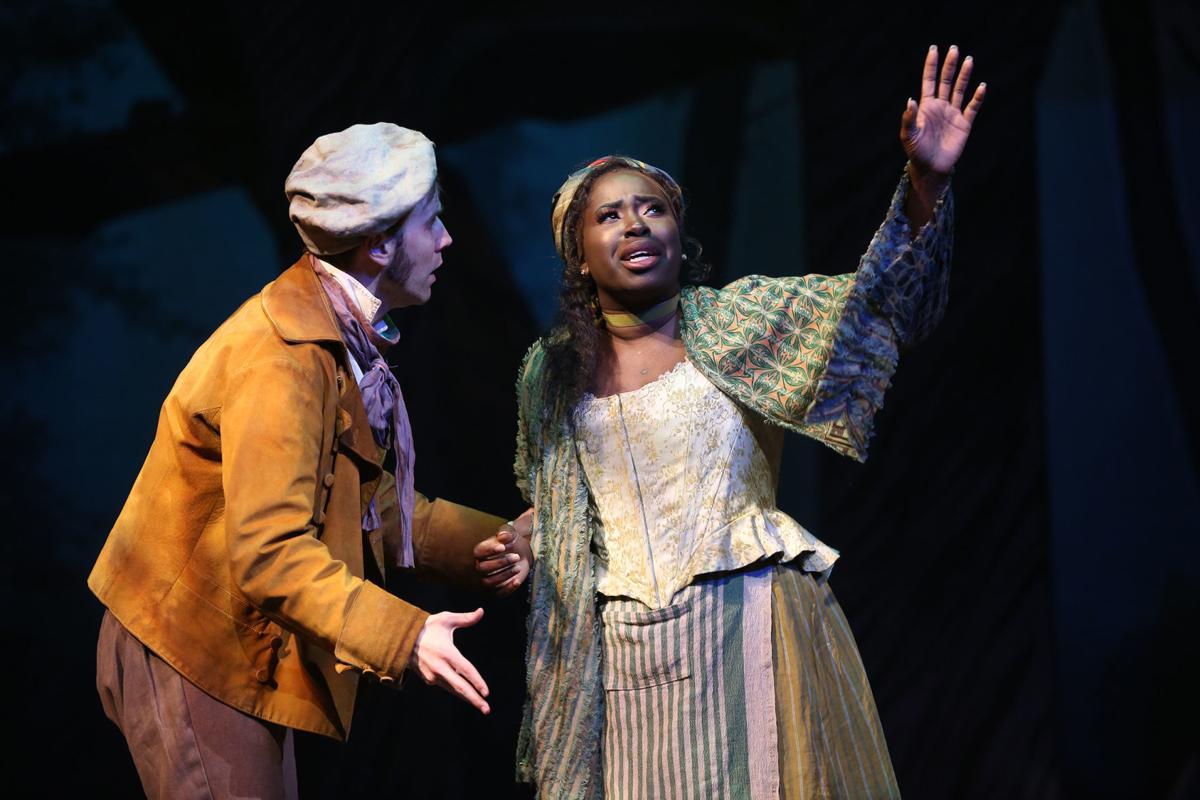 Evan Casey as Baker and Awa Sal Secka as Baker’s Wife star in “Into the Woods," onstage at Ford's Theatre through May 22.

By GAIL CHOOCHAN THE FREE LANCE-STAR

In the fairy tale mashup “Into the Woods,” it’s not the two handsome princes who are melting hearts everywhere—surprisingly, it’s the Witch. She may not be good or nice, but she can certainly get you all choked up with one big emotional song.

The Witch is just one of the many iconic storybook figures populating this enchanting cautionary tale from the brilliant minds of Stephen Sondheim and James Lapine, who also collaborated on “Sunday in the Park With George.” Not only is the musical pleasantly overstuffed with characters—everyone from Cinderella to Little Red Ridinghood and her Wolf, but also some pretty clever lines. “Slotted spoons don’t hold much soup,” simply spoken by Jack’s Mom, is my new favorite line.

Director Peter Flynn and his talented cast and crew have dreamed up a wildly fun and heartwarming production, which marvelously unfolds in Milagros Ponce de León’s imaginative set design. Colorful vines swirl above the action for the indoor scenes, and those shadowy woods—that everyone seems to go on and on about—definitely have a spookiness about them. Credit must also be given to lighting designer Rui Rita and Wade Laboissonniere for the gorgeously detailed costumes with whimsical touches.

“Into the Woods” isn’t a Disneyfied remix version of your favorite children’s books—heels will be chopped.

During the first act, the Baker and his wife are given a shopping list of items (a cow as white as milk, a cape as red as blood, hair as yellow as corn and a slipper as pure as gold) from the Witch so she can reverse the family curse that prevents them from putting a bun in the oven. Turns out the Baker’s father was stealing greens from the Witch’s garden to feed his wife, a move that not only cost him his baby daughter, but also the prospects of having any grandchildren. In the couple’s quest to procure the items, they cross paths with Little Red Ridinghood, who’s delivering goodies to Grandma; Cinderella after she’s been partying with the royals; and young Jack, who’s reluctant to sell his cow best friend so he can support his family.

As for the daughter, Rapunzel grows up in the care of the Witch, who keeps her sheltered from the dangers of the world in a tower.

The musical then takes a deep dark dive into what happens after the glow of happily-ever-after wears off, and the consequences of what our heroes and heroines had to do to make their wishes come true, like lie, cheat and steal.

“Into the Woods” may be steeped in fairy tale land, but there’s a realness to the characters and their dreams and dilemmas, that makes them relatable to audiences. A couple who wishes for a child. A mother who will do anything to keep her daughter safe. The bond between a boy and his beloved animal companion, which in this case is a cow (hilariously played by Tiziano D’Affuso, who gives Milky White some spunky attitude).

Ford’s Theatre has assembled a uniformly solid cast, led by the fabulous Rachel Zampelli as the Witch. Sure, the Witch does seems to have some villainous tendencies, like cursing people for stealing her arugula, but her character is more complicated than that. She’s a fiercely protective mother, the voice of reason and quite a rapper (yes, you read that right). Zampelli packs some fire and softness in her moving renditions of “Stay With Me” and “Witch’s Lament,” and of course, the show-closing “Children Will Listen.”

Other standouts include Erin Driscoll and Awa Sal Secka, who play Cinderella and the Baker’s Wife respectively and have the most heavenly voices; Evan Casey as the caring and constantly perplexed Baker; and Christopher Mueller and Hasani Allen doing double time as the wolves and charming princes. Jade Jones and Samy Nour Younes also have some nice moments as Little Red and Jack.

This is one crowded show with lots of story to tell and an abundance of musical numbers, both of which contributed to the sluggish pace at times. But just power through, because Sondheim’s lyrically meaty songs in the hands of this dream of a cast are a real treat.

Trump photo book 'Our Journey Together' coming next month

NEW YORK (AP)—Donald Trump’s first post-White House book will be, like so much else about him, a departure from other former presidents.

If asked to choose one word to describe this book, I would not be able to find one. What I can say is that it is an important book, a troublin…

Fredericksburg resident Donna Lee Davis, the author of “Here Is the Church: A History of St. Mary Parish” and the Christian mystery–romance “M…

Book review: Book on Van Gogh, his influences is a must-read for art lovers

What makes this book a must for any art lover are the spectacular photographic reproductions of the artists who influenced Van Gogh and the works that he offered in response to those influences.

As a young reporter for The Richmond News Leader in 1976, I was assigned to cover a potentially newsworthy court proceeding in a rural county.

Book review: 'A Most Clever Girl' inspired by story of real-life double agent

Stephanie Marie Thornton's "A Most Clever Girl" reveals the fascinating story of a WWII- and Cold War-era spy.

Cinderella (Erin Driscoll) is one of many fairy tale characters frolicking about in Stephen Sondheim and Jame Lapine’s beloved musical ‘Into the Woods.’

Rayanne Gonzales as Jack’s Mother, Samy Nour Younes as Jack and Tiziano D’Affuso as Milky White in the Ford’s Theatre production of “Into the Woods,” directed by Peter Flynn, choreographed by Michael Bobbitt and music direction by William Yanesh.

Evan Casey as Baker and Awa Sal Secka as Baker’s Wife star in “Into the Woods," onstage at Ford's Theatre through May 22.