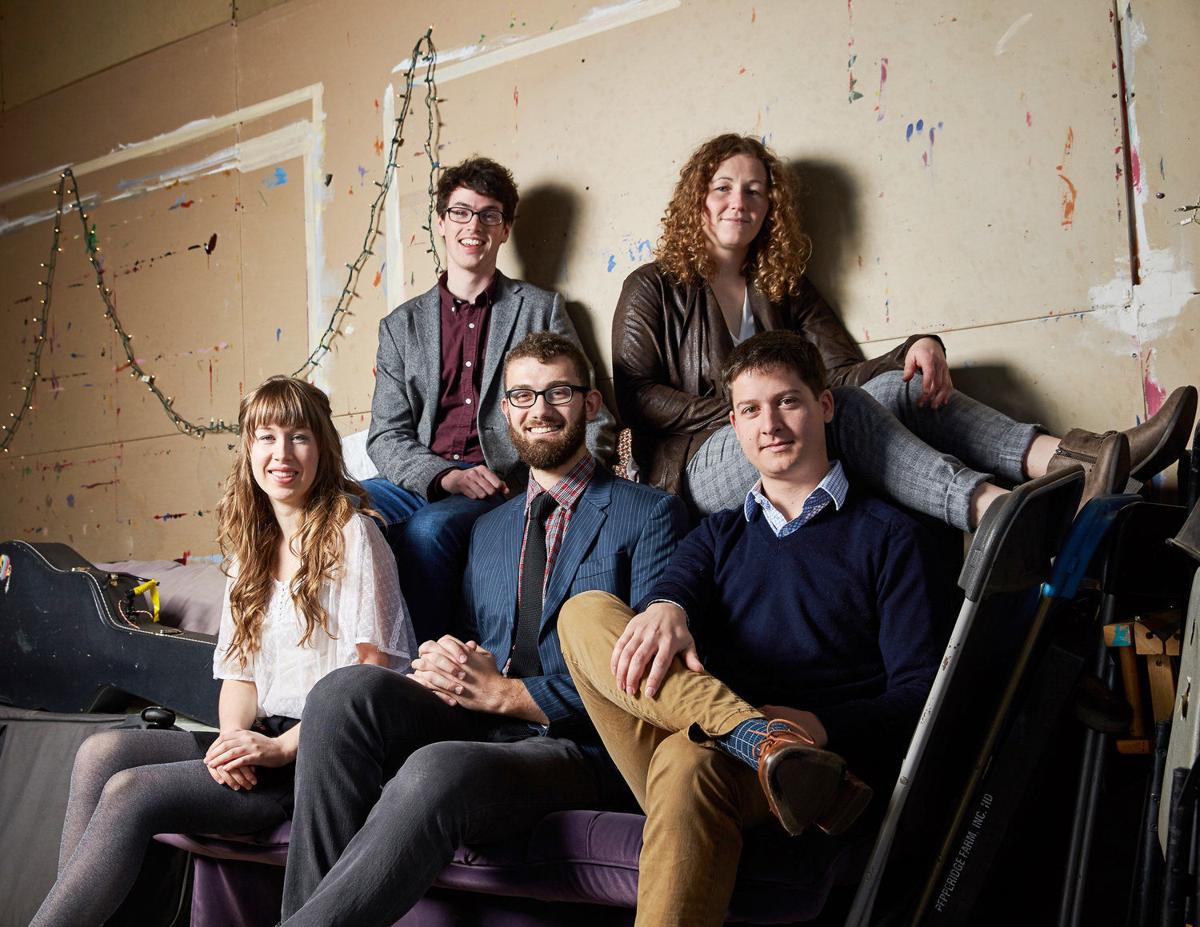 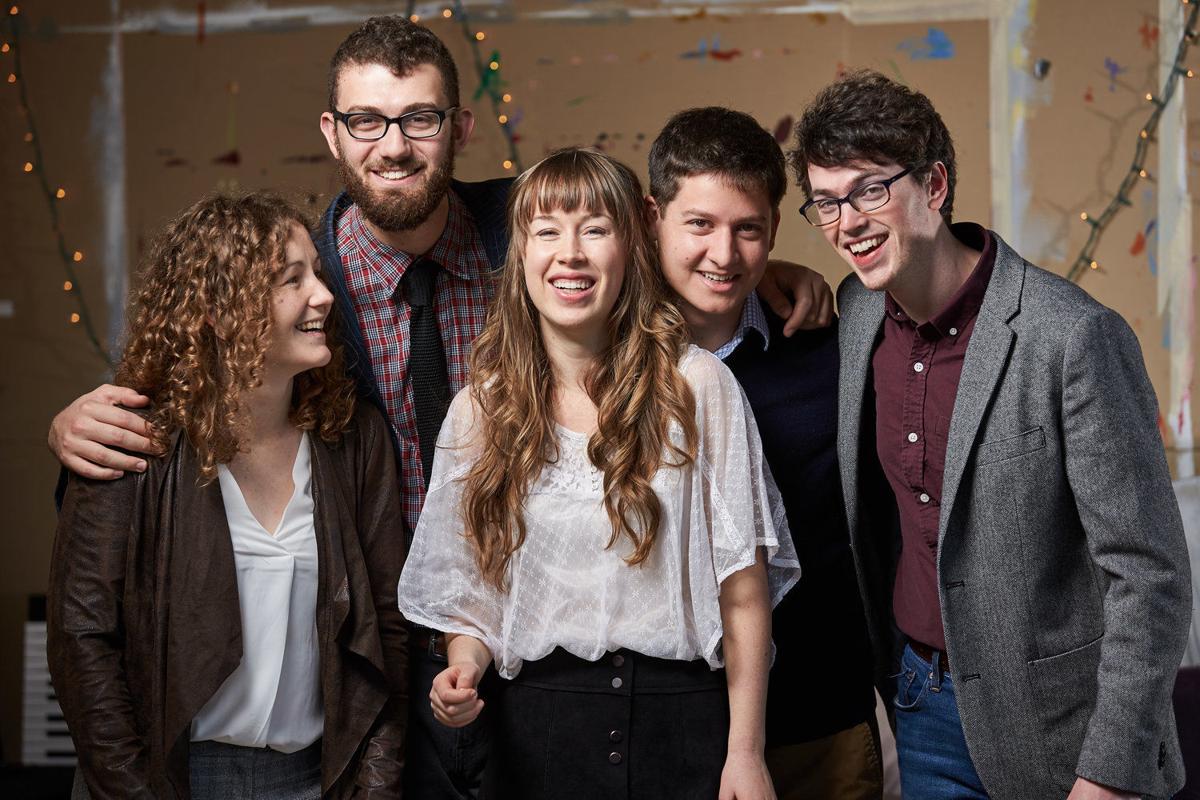 With members hailing from across the country and around the globe, up-and-coming bluegrass band Mile Twelve came together thanks to a chance meeting in a Boston-area club.

The Cantab Lounge in Cambridge, Mass., hosts a bluegrass night every Tuesday where Catherine “BB” Bowness (banjo), Bronwyn Keith-Hynes (fiddle), Evan Murphy (guitar, vocals), and Nate Sabat (bass, vocals) met and jammed together. Keith-Hynes and Sabat were students at the Berklee School of Music, Bowness is from New Zealand, and Murphy is the only Boston native in the band. The four found common musical ground and were all committed to forming a full-time band. Two years later they added David Benedict on mandolin.

“The bluegrass scene in Boston is pretty energetic, but it’s small,” said Murphy. “So if you have people in their 20s who play bluegrass music, they’re gonna meet each other in Boston, especially if they’re going to the same jam session every week.”

Benedict was a busy touring musician in Nashville. Some of the members of Mile Twelve met him at the Acoustic Music Seminar in Savannah, Ga., an annual event for string musicians under 22 years old. When Mile Twelve asked Benedict to join the band, he had a regular gig with renowned bassist Missy Raines.

“We all liked David’s playing and thought it would be great to have him in the band, so we asked him if he would just move to Boston to rehearse and play with the band,” said Murphy. “He had to think about it, but he decided he was interested in joining the group so he did it.”

Bowness made the longest journey to Boston. Originally from Whanganui in New Zealand.

“When BB was in her early teens she was hanging out with this guy and saw him play banjo and was totally fascinated by it,” said Murphy. “He told her the banjo is kind of hard, if she wanted to learn guitar they could start with that. She said no, she wanted to learn banjo. She got a little bit obsessive about it, finding out about people like Béla Fleck and Tony Trishka and the Punch Brothers and was doing this deep dive. She got to a point in her 20s and realized there was little hope of being a full-time banjo player in New Zealand. She happened to know some people in Boston and knew there was a young bluegrass scene there because of the music schools, so she moved here.”

Mile Twelve released its second album, “City On A Hill,” this year. The album features 10 original songs by the band, along with two covers. Each band member contributes to the original songs, which are all credited to Mile Twelve.

“If it has lyrics, it started with Nate or I, then there’s always a collaborative finishing and arranging process,” said Murphy. “So if you look at the album, we credit the songs to Mile Twelve rather than to an individual member, because it’s such a collaborative process of getting a finished song.”

The songs show a range of styles from traditional bluegrass to modern acoustic music, with unusual chord changes and time signatures. That variety is intentional, as Murphy explained that he wrote one song on the album to fill a particular sound.

“Some of them are written in order to fill a slot. For example, on the current album there’s a really fast song called ‘Innocent Again.’ It’s the classic key of B, raging fast with lots of solos. That song was written because we wanted to have an exciting, fast song on the album. I had an idea for a bluegrass prison song, but turning it on its head so it’s about a guy who gets out of prison rather than a guy who’s going into prison.”

One of the group’s most requested cover songs is not on the album, but was released as a single: Elton John’s “Rocket Man.”

“The reason we did that was that when David joined the band, he had to learn all the songs we’d already written, so it was a ton of work for him,” said Murphy. “He had to learn these songs that we’d been playing for a couple years. So Nate said, ‘why don’t we give David a rest and all learn something new together, so it’s not just David having to learn all our songs?’ ”

Mile Twelve has received positive reviews and was nominated for two years in a row for the New Artist Of The Year award by the International Bluegrass Music Association. The band is on tour promoting “City On A Hill” and plans to return to the studio next year to work on its third album. The members will continue to expand the sound of bluegrass with their youthful energy.

Murphy balks at purists who want to narrow the definition of the genre.

“I gotta tell you, there are few things in this world that I find more utterly boring to think about than what does and does not constitute bluegrass music,” said Murphy. “It’s not interesting to me when I’m writing songs or recording them. It’s hard to think of a smaller thing to care about. It’s just music.”

ACM Awards 2020: Check out the list of winners and scenes from the show

Entertainer of the year, the top ACM prize, was presented last and produced a surprise. Here's the full list of winners as well as photos from the night's festivities.

What's behind the backlash to the French independent film that sparked a #CancelNetflix response?

The DMC Performing Arts Collective is presenting "People of Corn: A Mayan Tale" and "The River Within Us" on Saturday at Patriot Park, for its first public performance since February.

The Lectures on the Lawn series kicks off Sept. 22 with "Exploring Domestic Workspaces in and around the Washington House," presented by Kenmore's archaeology director David Muraca.

Brace yourself for what might be the weirdest fall TV season ever.

This year's National Dance Day celebration offers a daylong opportunity for people to dance at home and features D.C. dance organizations that have been closed because of the pandemic.