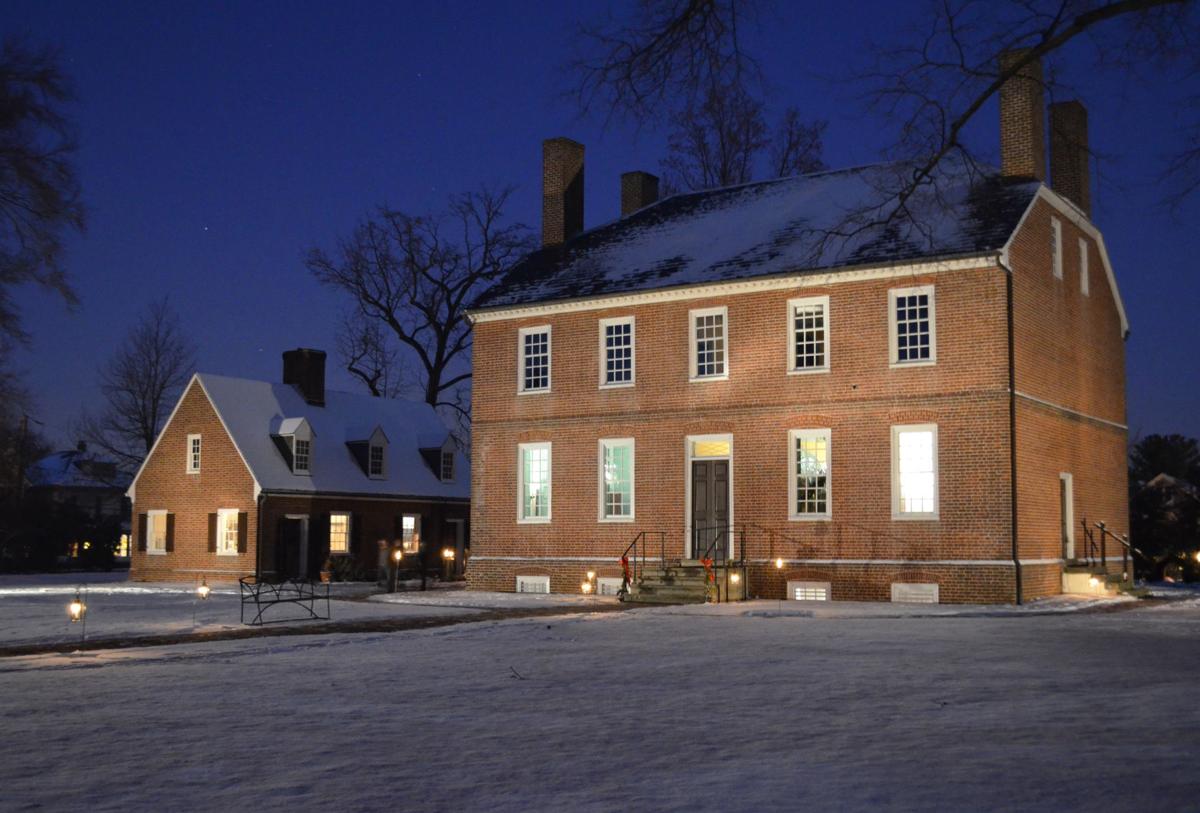 Historic Kenmore lit for Twelfth Night on a snowy night in 2017. This year’s celebration will be held outdoors. 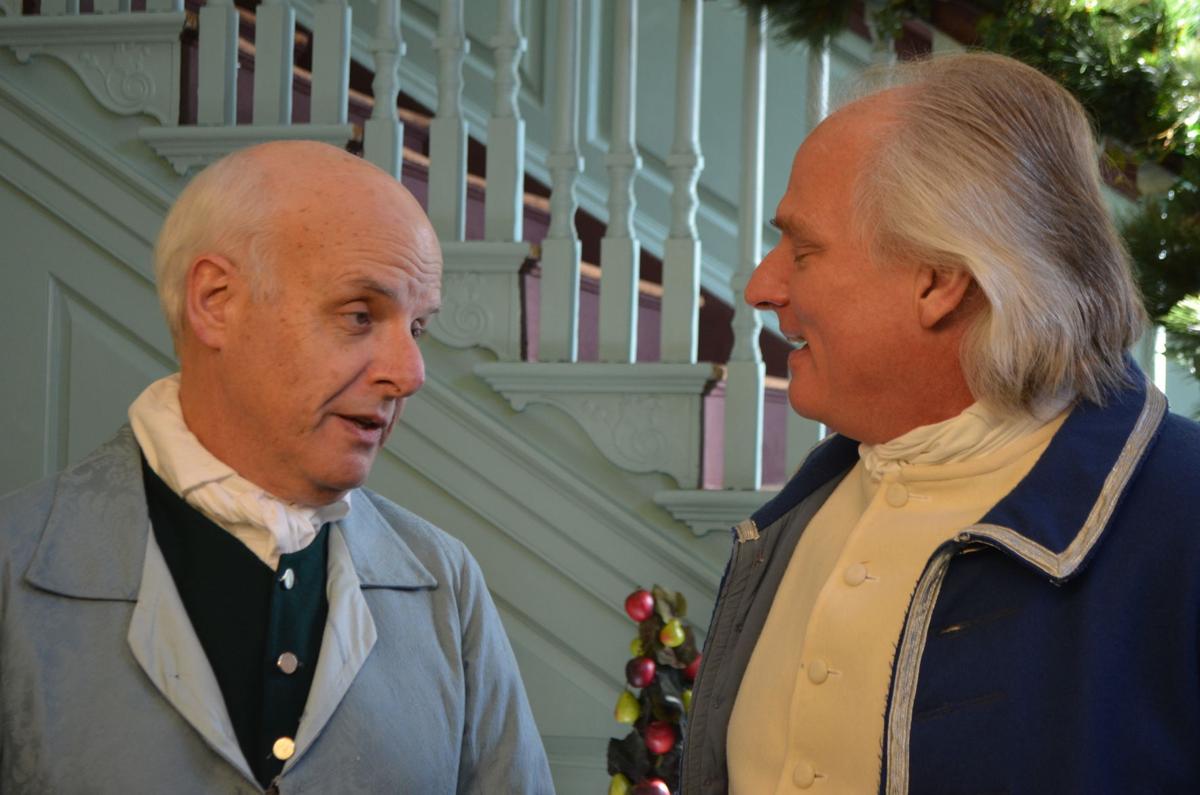 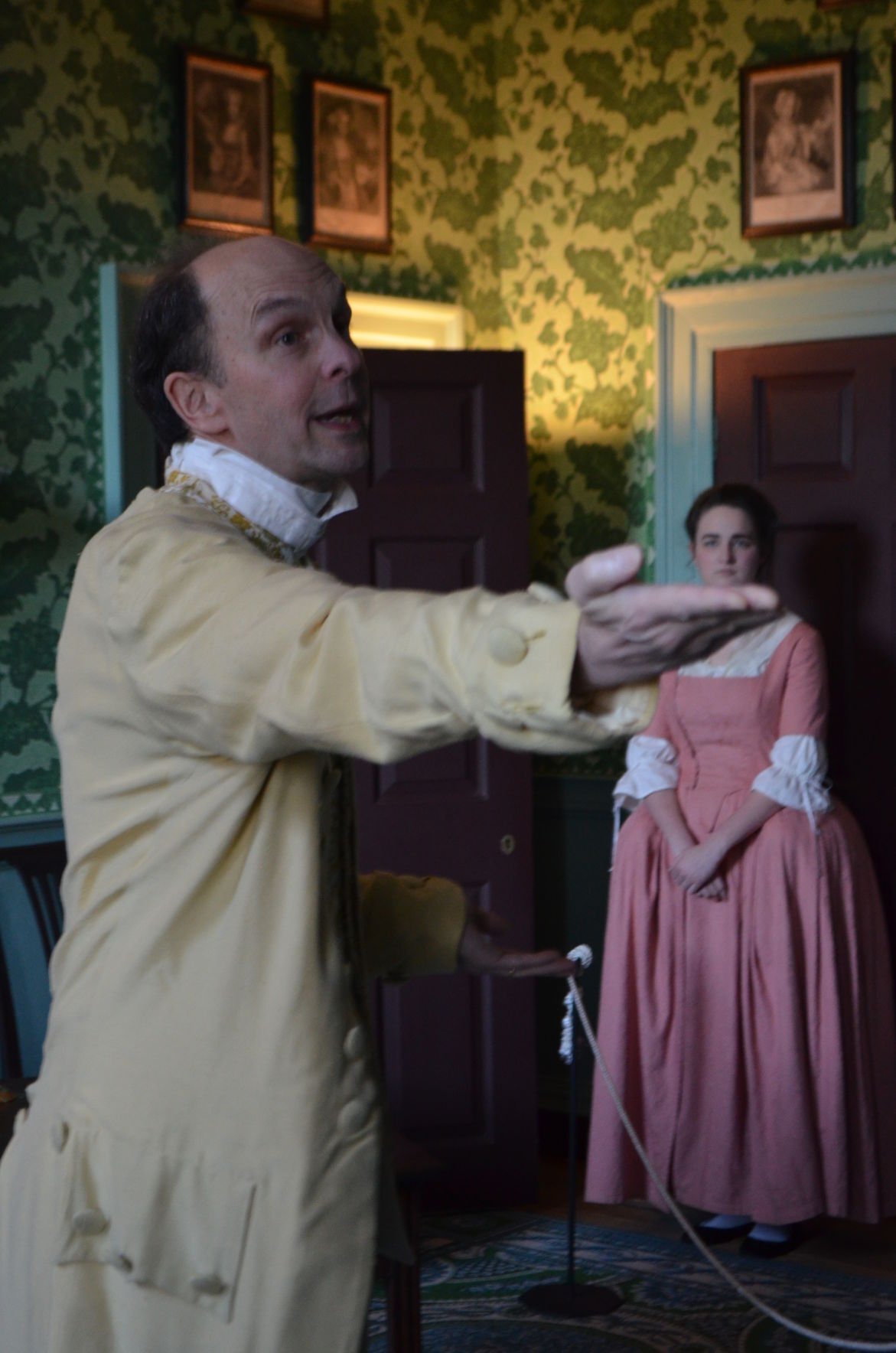 Henry Mitchell (Trip Lloyd) comes to the decision to remain loyal to the British Crown during the Twelfth Night presentation last January. 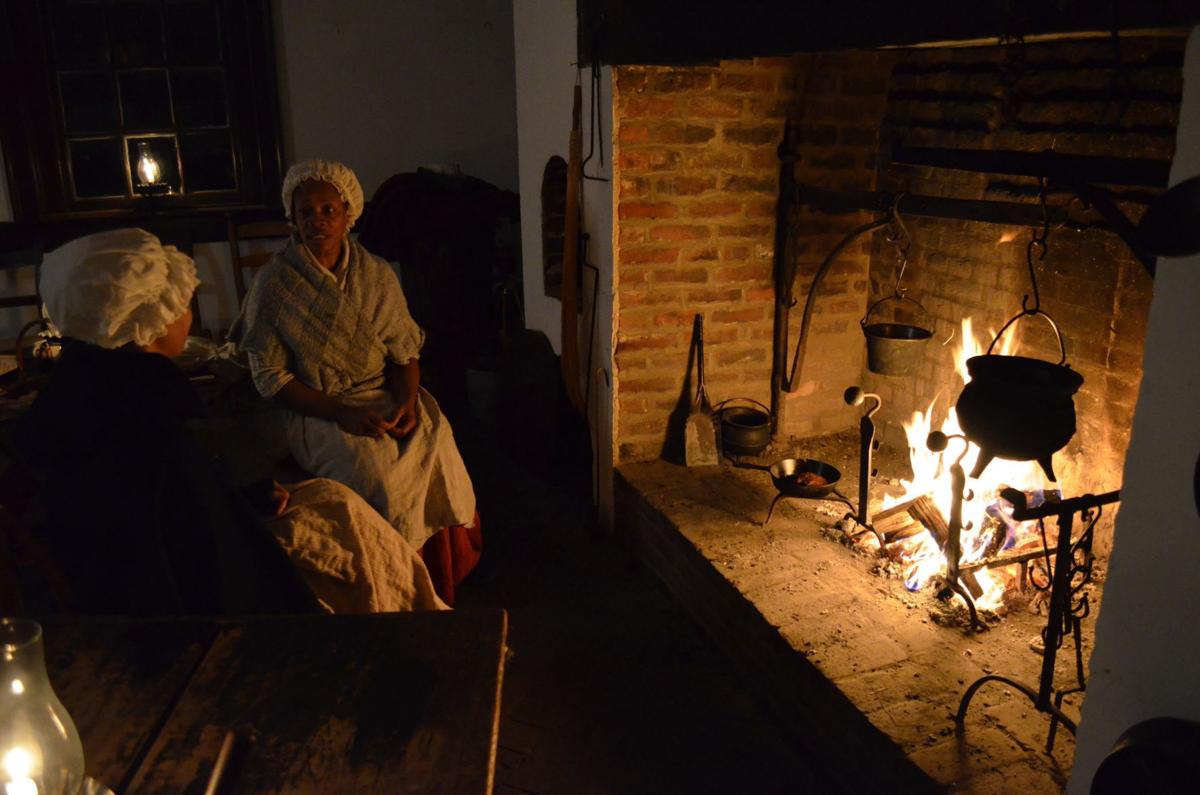 Rachel (Gladys Perkins, right), an enslaved cook, expresses concerns to Hetty (Ashleé James), an enslaved washerwoman, about her plan to run away to freedom. 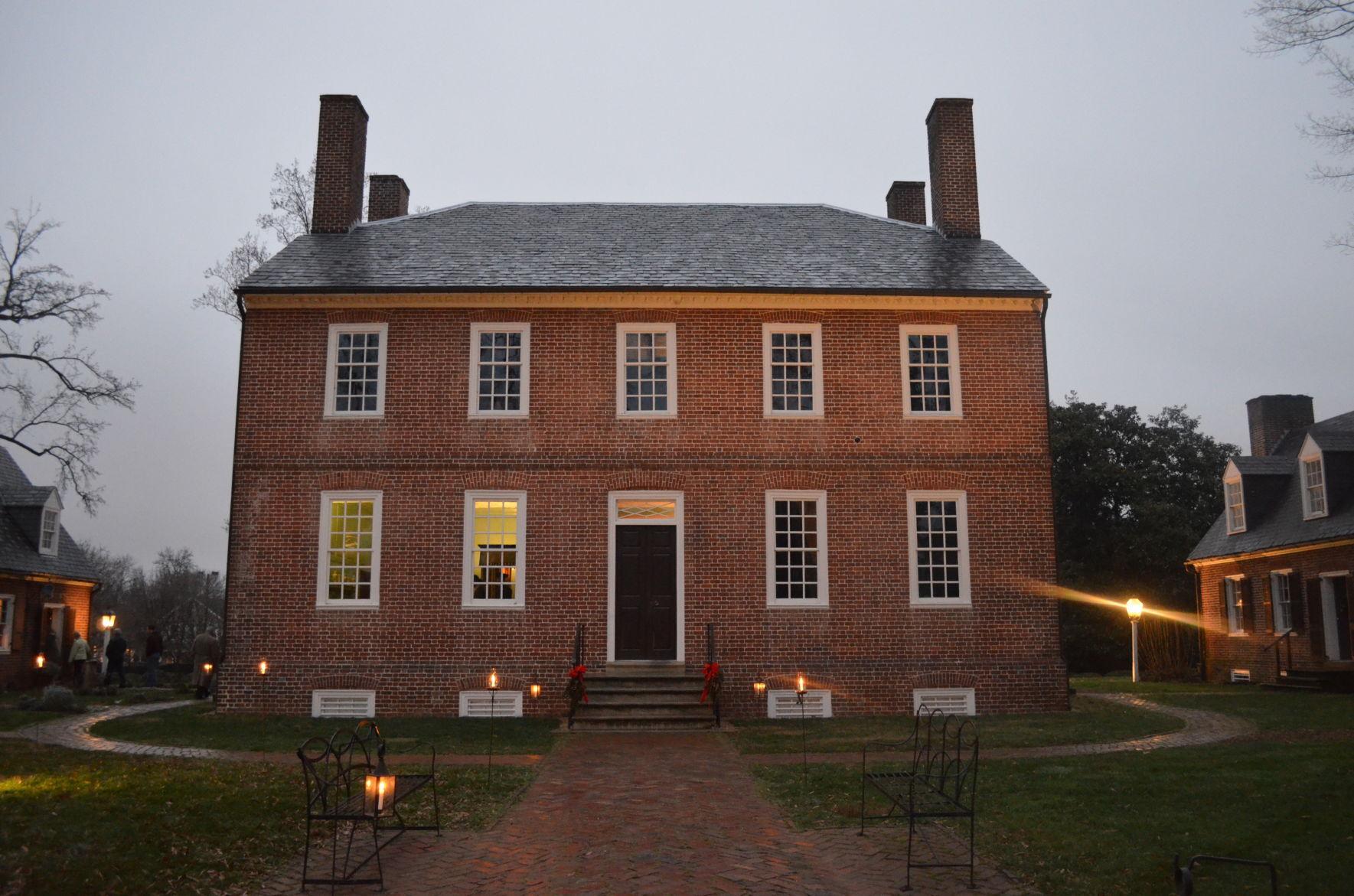 Due to the pandemic, this year’s Twelfth Night presentation at Historic Kenmore will be held outdoors. The audience will move to three different locations near the house to watch each scene. Masks are required and social distancing will be maintained.

By COLLETTE CAPRARA FOR THE FREE LANCE–STAR

The folks at Historic Kenmore invite all to join them this weekend for the widely popular Twelfth Night at the home of George Washington’s sister Betty and her husband, Fielding Lewis. The celebration, which marks the last day of the Christmastide, has become an annual tradition for many families, and this year’s event has a special twist that may make it the most memorable of all.

Throughout the years, the Twelfth Night event has dramatized how the evening would have been celebrated in the Colonies in the 18th century—particularly, by the Lewis family in their new home at the cusp of 1776. In previous presentations, visitors were guided to different rooms of the house, where they could view actors portraying the guests and residents interacting and “eavesdrop” on their conversations. In the process, guests would learn of the most recent news in Virginia at the time and the latest developments in the Revolutionary War. The dramatized discussions and musings reveal that the festivities in January 1776 would have been overshadowed that year by a cloud of uncertainty and concern about the outcome of the Revolution and the future of those who were gathered at the estate.

The unique challenge of presenting Twelfth Night this year was designing a way to offer a view into the 18th-century celebration while ensuring social distancing for the health and safety of visitors. With ingenuity and creativity, the staff measured up to the task.

“Since March this year, our programs and events have been held outside, so we had to figure out how we could present what is decidedly an ‘inside’ event on the grounds of the estate,” said Zac Cunningham, manager of educational programs. “I modified the script for the dramatization, coming up with a reason why the people in three different scenes would be outside of the house.” In addition, the size of the cast was reduced and the number of tickets available for each performance time was slightly reduced.

As the first scene opens on the front steps of the house, George Weedon, a Patriot and tavern owner, is arriving at Kenmore for the festivities, when he encounters Fielding Lewis, who is returning from the kitchen outbuilding, where he has given instructions.

Before entering the house, the two stop at the door to share their thoughts and information about the latest news of the Revolution, some of which was brought by travelers coming through Weedon’s inn as they fled the fighting in the South. Recent events included the burning of Norfolk on New Year’s Day and a proclamation issued by British Governor Lord Dunmore that promised freedom to any slaves of Patriots who join the British troops. In addition, the conversation between Fielding and Weedon reflected their concerns about the possibility of Loyalists in their midst, setting the stage for the second scenario.

On the south side of the house, visitors see local merchant Henry Mitchell, who exits the house and delivers a soliloquy giving insight on the impact of the distrust of fellow townsfolk. Visitors learn that although Mitchell aligned with the Patriots’ cause, he was concerned about their means to their goal, which he feels could be accomplished without violence and, instead, through petitions to the Crown and appealing to Parliament. In addition to such philosophical and ethical considerations, Mitchell also reflects practically on the damage that war brings to his trade. These thoughts, coupled with his indignation and disappointment about being ostracized by people he has known for 20 years, tip the scales for the decision Mitchell comes to regarding where his loyalties should lie.

As visitors move on to the yard outside the kitchen building, they view a conversation between two enslaved women—Hetty, a washerwoman, and Rachel, a cook, who are stacking firewood. While the earlier conversation between Lewis and Weedon focused on the uncertainty that the Dunmore Proclamation brought to their lives, the conversation between Hetty and Rachel reveals both the promise and the danger that the gambit for freedom could have for them. Hetty confides she and her husband have made the decision to take the risks involved in fleeing to the British troops, with a backup plan of joining a hidden settlement of former slaves. In contrast, Rachel, who is older and more cautious and fearful, focuses on the prospect of being caught and the retaliation that would be incurred.

The action and dialogue of the scenarios involves actual people of the past and references events that had happened in the Colony, and the scenarios are historically based but created by the script’s authors. While it is not certain whether the Fieldings actually hosted a Twelfth Night celebration during their first Christmastide on the estate, it would have been their only opportunity to do so, as the Revolution proceeded and impacted their lives.

“Our theater productions always emphasize that the people we study and read about in the past—historic figures—were real human beings who experience many of the same hopes, feelings, frustrations and happiness that we feel,” said Cunningham. “In our own uncertain times, we can especially appreciate the uncertainty that confronted our characters in this performance. In addition, it provides insight into what was at stake in the Revolution and reminds us that it was not inevitable that the Patriots would win their fight for independence or that the Revolution would result in a new nation.”

Twelfth Night at Historic Kenmore, 1201 Washington Ave., Fredericksburg. Jan. 8-10, with timed entry at 45-minute intervals from 3:30-6:30 p.m. Tickets must be purchased in advance online. Adults $15, students ages 6 and above $7, children age 5 and below free. Masks are required, and guests should dress in accord with the weather. 540/370-0732; kenmore.org/holidayevents

Phil Spector, the eccentric and revolutionary music producer who transformed rock music with his “Wall of Sound” method and who later was convicted of murder, has died. He was 81.

The legendary Betty White turns 99 on Sunday. Here's a look at how she's planning on celebrating as well as photos from her long and iconic career.

Historic Kenmore lit for Twelfth Night on a snowy night in 2017. This year’s celebration will be held outdoors.

Henry Mitchell (Trip Lloyd) comes to the decision to remain loyal to the British Crown during the Twelfth Night presentation last January.

Rachel (Gladys Perkins, right), an enslaved cook, expresses concerns to Hetty (Ashleé James), an enslaved washerwoman, about her plan to run away to freedom.

Due to the pandemic, this year’s Twelfth Night presentation at Historic Kenmore will be held outdoors. The audience will move to three different locations near the house to watch each scene. Masks are required and social distancing will be maintained.