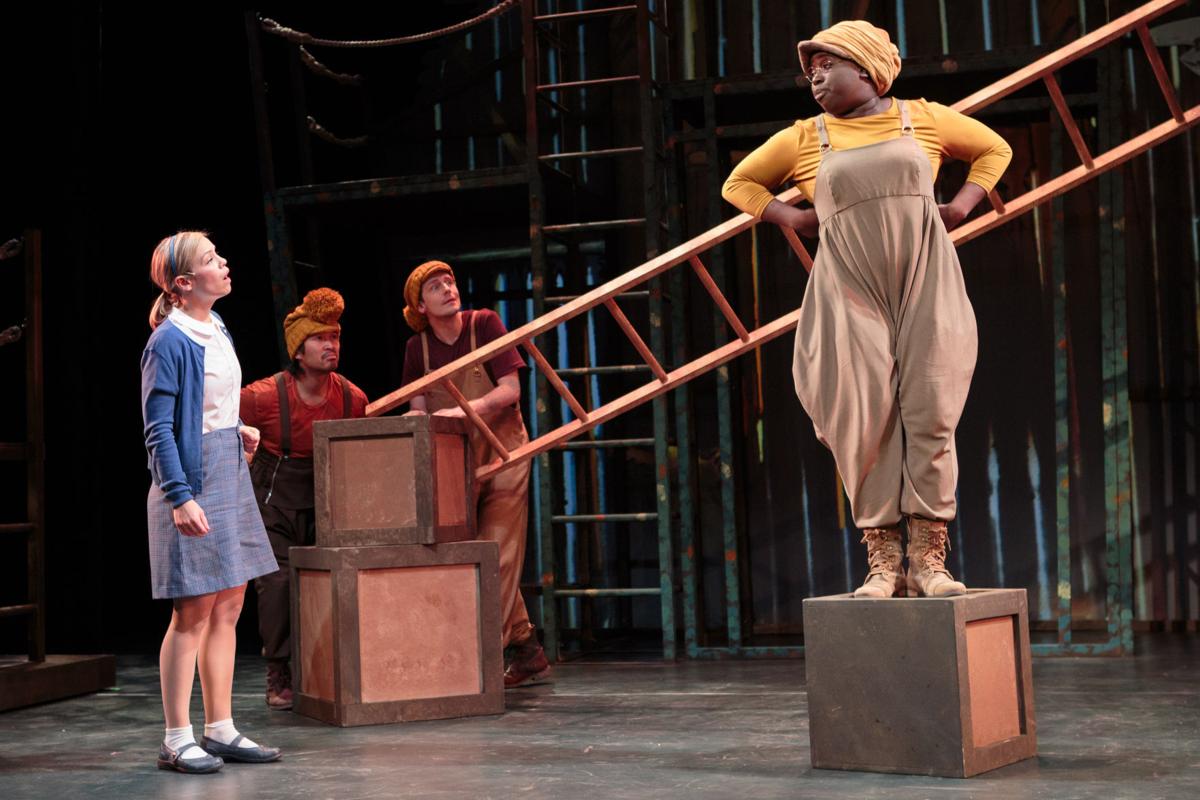 Erin Weaver, Eymard Cabling, Sam Ludwig and Awa Sal Secka appear in ‘Me ... Jane: The Dreams and Adventures of Young Jane Goodall,’ based on the book by Patrick McDonnell. 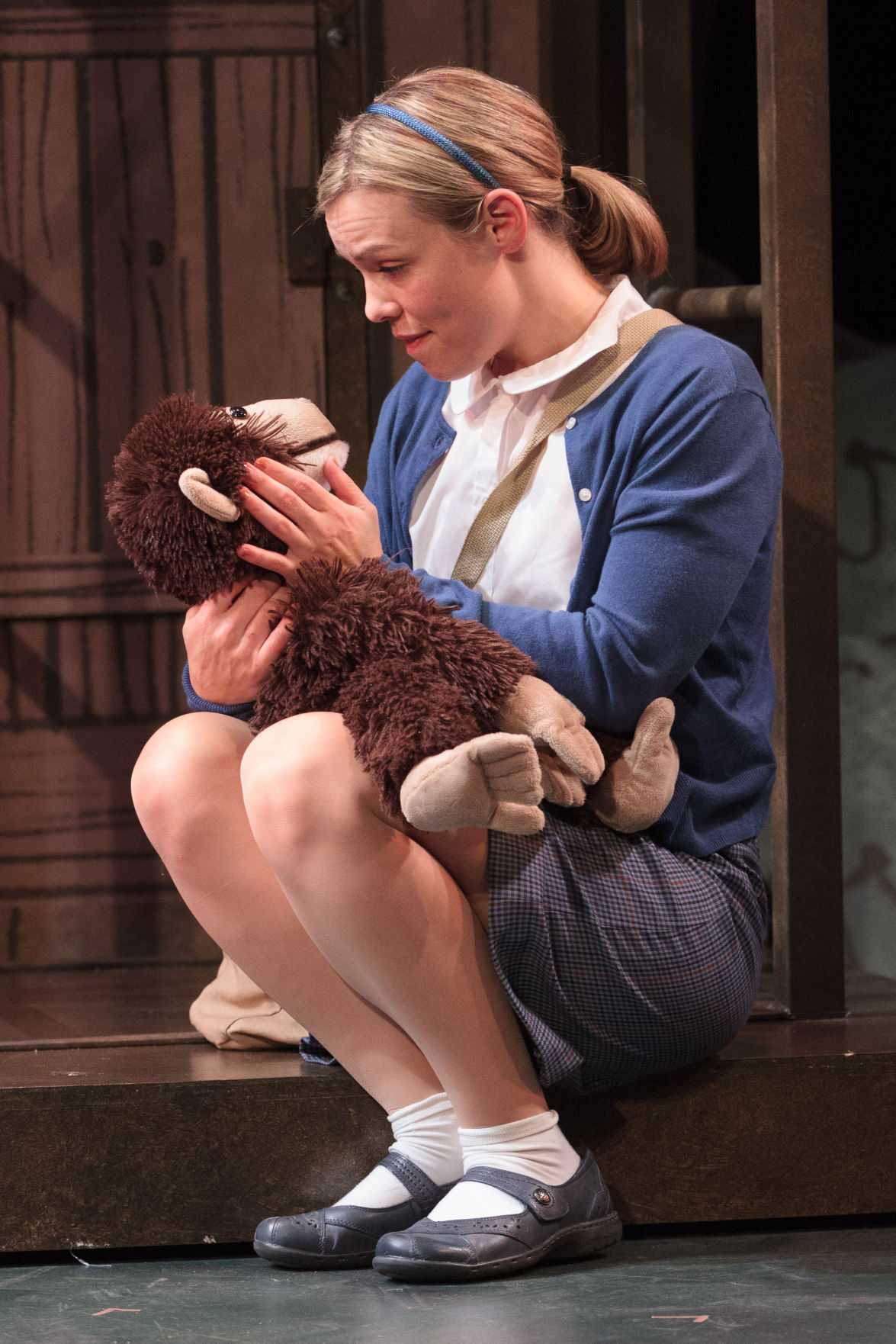 BY COLLETTE CAPRARA FOR THE FREE LANCE-STAR

The childhood dreams of two trailblazing geniuses come together in the current feature at the Kennedy Center Family Theater: “Me … Jane: The Dreams and Adventures of Young Jane Goodall.” The production—highlighted by original music, vibrant choreography and projected images—may, likewise, spark the creativity and imaginations of children in its audience.

Patrick McDonnell, the author of the children’s picture book “Me … Jane” on which the stage version is based, had always imagined being an artist and was inspired as a boy by the drawings in comic books. He followed that dream and became an internationally celebrated cartoonist of the comic strip “Mutts” and author of best-selling, award-winning books for children.

Jane Goodall’s lifelong vocation was also rooted in her childhood experiences—beginning with a gift she received as a toddler: a stuffed chimpanzee that she named Jubilee. As she explored her neighborhood with Jubilee under her arm and read stories from her favorite “Tarzan” books to him, Goodall imagined traveling to Africa to care for all the animals of the jungle. She went on not only to realize that hoped-for journey but also to become world-renowned as a scientific researcher, humanitarian and environmentalist.

In his Caldecott Award-winning book “Me … Jane,” McDonnell depicted scenes from Goodall’s childhood ventures that she recounted in her autobiography—including watching squirrels race up and down trees, perching in her favorite tree to read stories to Jubilee, and even sneaking into a chicken coop to witness the miracle of the creation of an egg. McDonnell then worked with colleagues/soulmates director Aaron Posner, composer Andy Mitton and choreographer Christopher d’Amboise to expand these anecdotes into uplifting, action-packed scenes for a stage musical version of “Me ... Jane.”

Goodall’s childhood companion, a neighborhood dog named Rusty (whom she credits as her greatest teacher in life), also plays a key role in one of the scenes.

McDonnell’s deep, longstanding commitment to the protection of the environment and its inhabitants made Jane Goodall the perfect choice as the subject of the works he would create to provide information and inspiration about their shared goals.

“I feel this play carries an important message about Jane and her work—to give thought to those outside yourself and have empathy for animals,” said McDonnell. “It also shows that, if you have a dream to do something or be somebody and you stick with it, it can happen. Jane lived her dream and still lives it today, and I think that is an inspiring message.”

In addition, McDonnell hopes that the play will encourage children to spend time outdoors exploring nature and becoming connected. “It is all about connections,” he said.

That message is conveyed through simple, yet memorable scenes in his picture book, such as one of little Jane feeling as if she could hear the sap pulsing through her favorite tree and then listening to the beat of her own heart. As McDonnell writes: “It was a magic world full of joy and wonder, and Jane felt very much a part of it.”

Among those whose talents made McDonnell’s vision for the musical a reality is lead actress Erin Weaver, a four-time Helen Hayes Award winner. “Erin does a great job portraying young Jane,” he said. “She also brought many wonderful insights to make this play come alive.”

“This is a play for all ages, and I think the parents will be even more moved by it than the kids, because they know what Jane is about and how important it is,” said McDonnell, “but it also has chicken dancing and squirrels and dogs! I think anyone from 5 up will love this play.”

Jane Goodall has been treated to a rendition of one of the musical’s songs and is enthusiastic about the production.

“Jane’s autobiography is called ‘Reason for Hope,’ and her reason is today’s children, the next generation,” said McDonnell. “Unfortunately, we are handing them a planet that needs work, but she really believes that they’re up to it and that that is how we are going to change the world.”

Collette Caprara is a local writer and artist.

Trump photo book 'Our Journey Together' coming next month

NEW YORK (AP)—Donald Trump’s first post-White House book will be, like so much else about him, a departure from other former presidents.

Nominations for the 2022 Grammy Awards were announced Tuesday. Here's a list of nominees in top categories.

Young Life: 'Merry Trees' exhibit is a celebration of art, literature and the holidays

Book review: 'A Most Clever Girl' inspired by story of real-life double agent

Stephanie Marie Thornton's "A Most Clever Girl" reveals the fascinating story of a WWII- and Cold War-era spy.

Dwayne "The Rock" Johnson recently created an unforgettable moment for one special, and deserving, fan.

From cultural icons to animated heroes, here are all the new balloons joining the lineup in 2021.

Erin Weaver, Eymard Cabling, Sam Ludwig and Awa Sal Secka appear in ‘Me ... Jane: The Dreams and Adventures of Young Jane Goodall,’ based on the book by Patrick McDonnell.