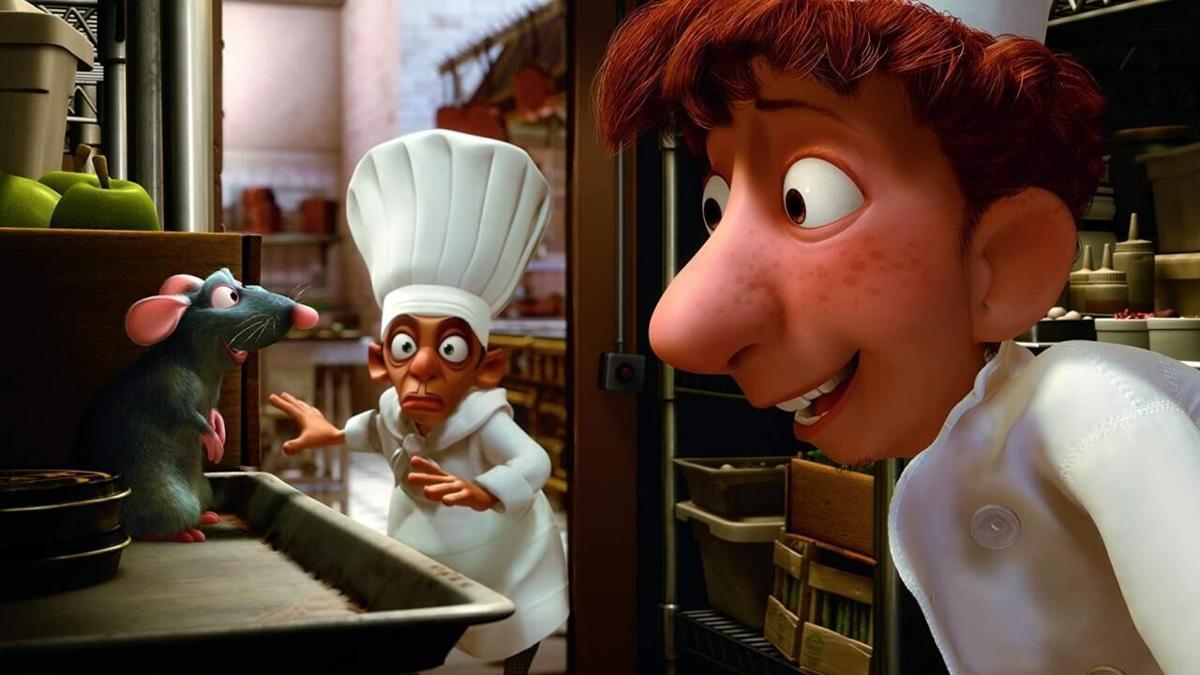 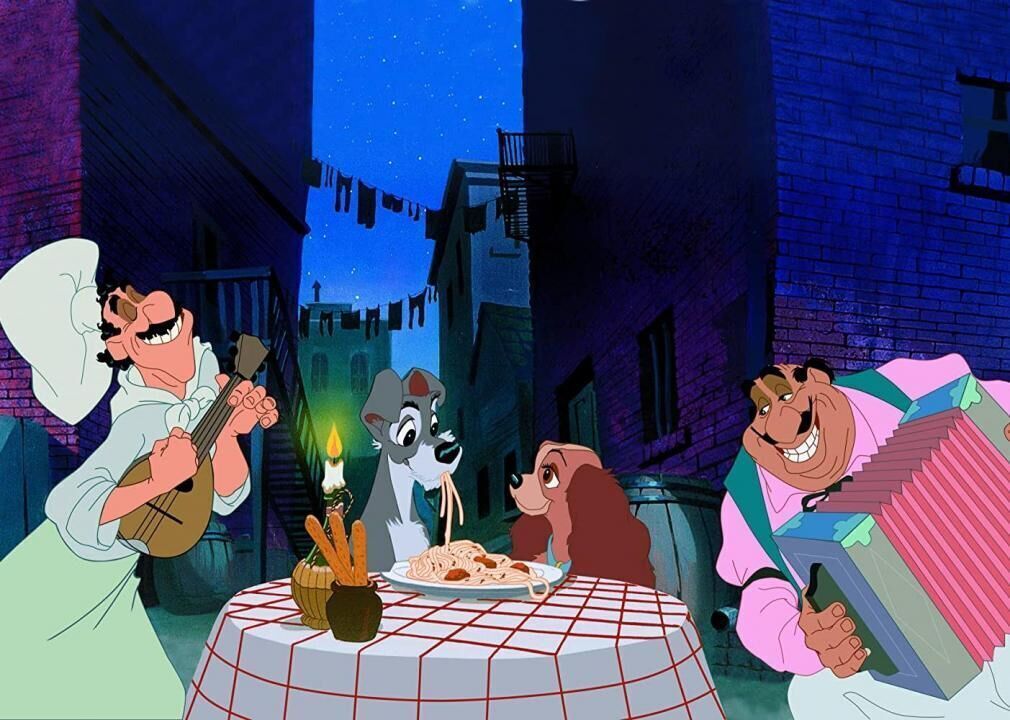 A pampered pooch and a streetwise dog fall in love in Disney’s “Lady and the Tramp.” 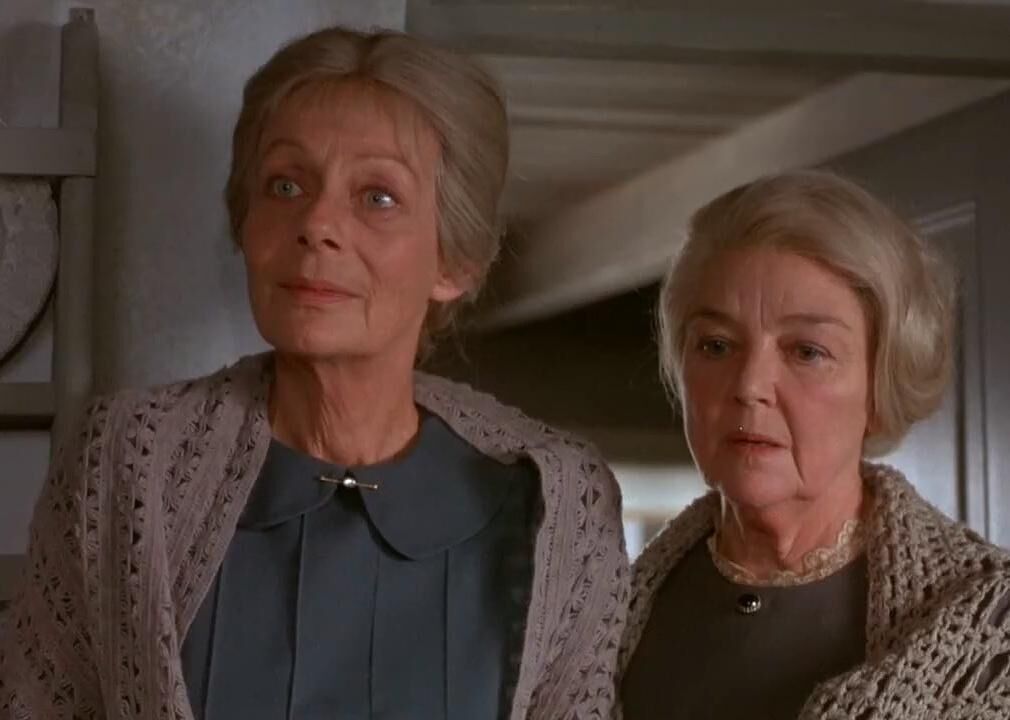 A Danish film, “Babette’s Feast” is about the almost magical meal a refugee from Paris cooks for the two sisters who are hosting her as well as their aging congregation. 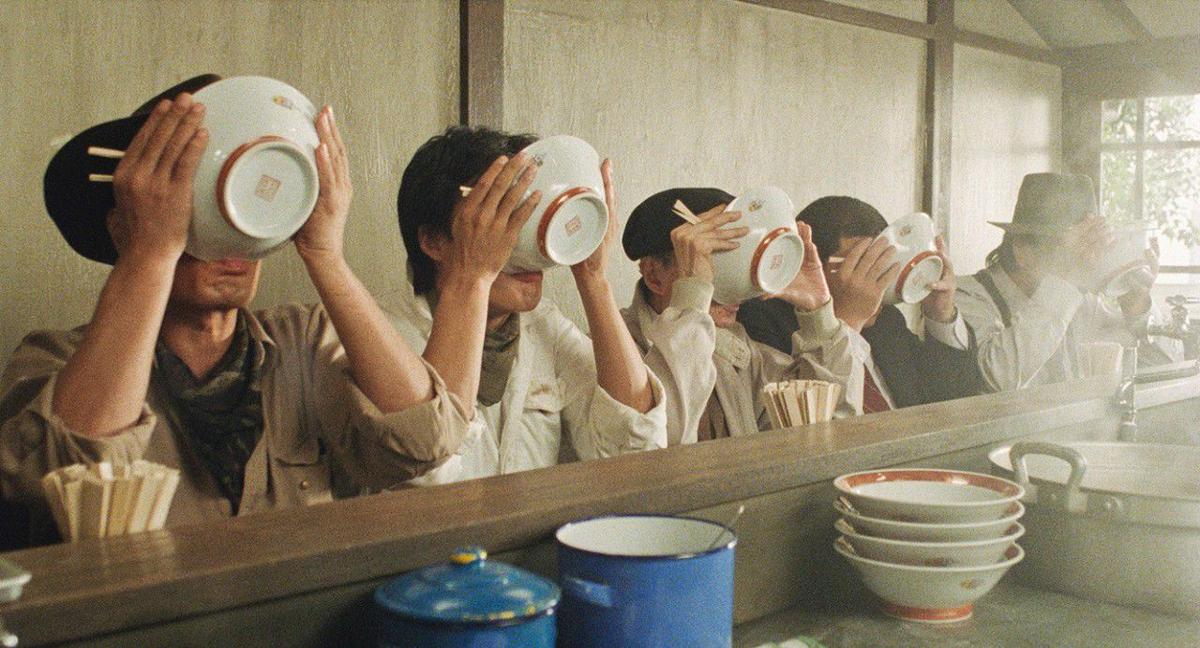 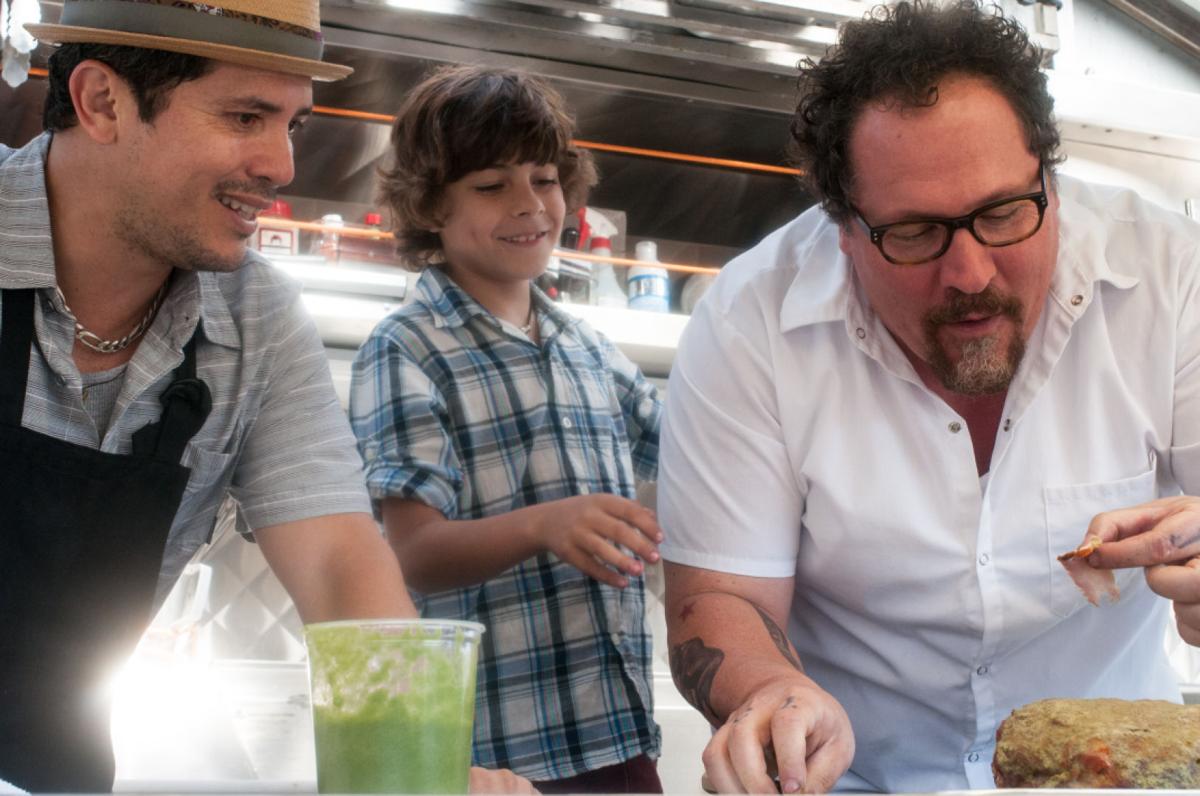 John Leguizamo, Emjay Anthony and Jon Favreau star in ‘Chef,’ about a man who rediscovers his love for cooking.

‘Cloudy With a Chance of Meatballs’ 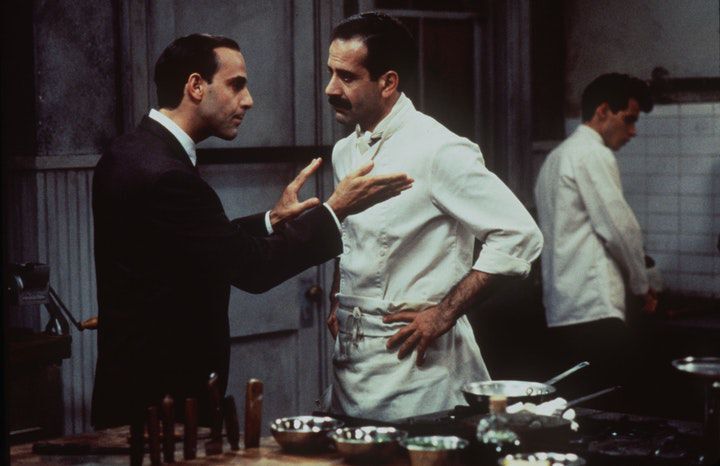 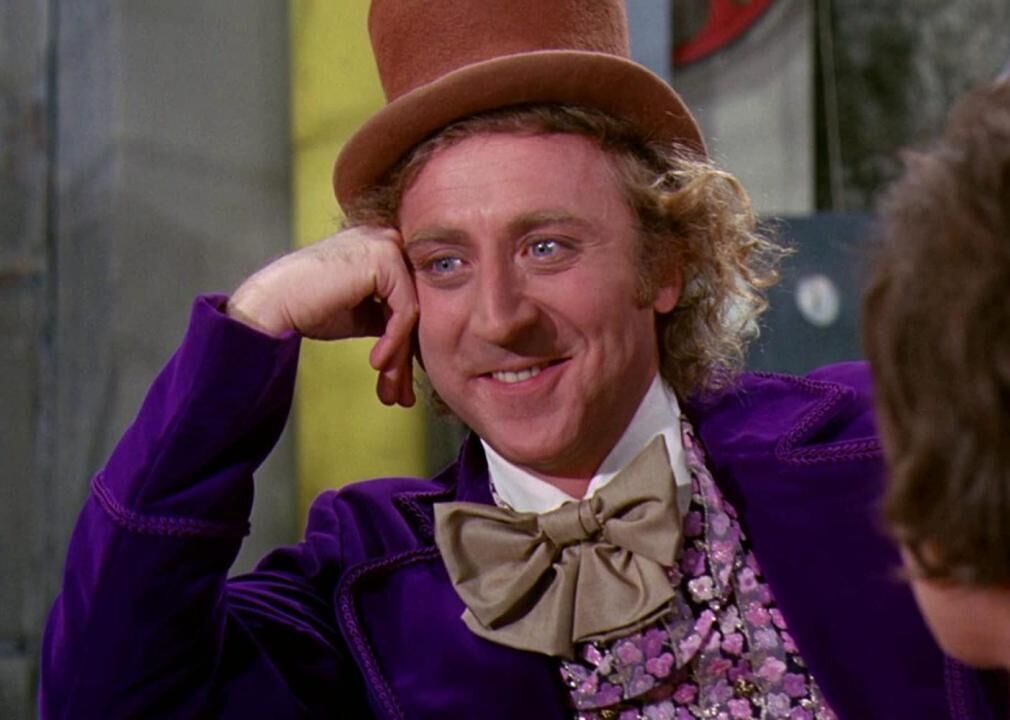 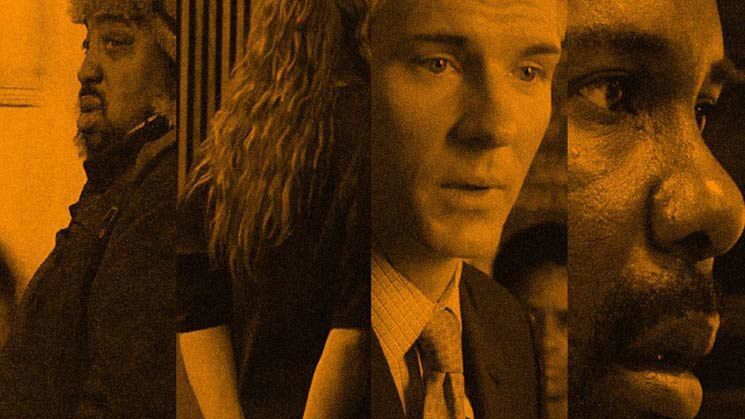 As we spend time with family and friends over food this Thanksgiving, there’s nothing like finishing a delicious meal and gathering together to relax with a film. But if the year’s biggest meal wasn’t enough to sustain your appetite, here are several great films about food that will make you even hungrier for more.

As the name implies, “Babette’s Feast” builds to a seven-course meal that costs the title character 10,000 francs to put on. The exquisite meal is crafted with care and love, an act of service and appreciation for those who have supported her for years. But “Babette’s Feast” shows how a great cook is also a great artist, as each course is another composition to be savored and enjoyed. Rarely has the act of making and eating food been so captivating on screen. (Available on The Criterion Channel and HBO Max)

‘Big Night’Centered around two brothers (Stanley Tucci and Tony Shalhoub) over the course of one day as they try to save their struggling restaurant, “Big Night” is a charming tribute to the beauty of cooking. While the film builds to a decadent dinner full of some of the most delicious Italian food ever out on screen, “Big Night” even makes a small omelette look scrumptious. “Big Night” is a delightful celebration of food, family and the art of cooking. (Available on Kanopy and Paramount+)

‘Chef’Before writer/director Jon Favreau would go on to co-create “The Mandalorian,” he made and starred in the quaint “Chef,” about a head chef who leaves his restaurant in order to open a food truck with his family. Some of Favreau’s fellow Marvel actors like Scarlett Johansson and Robert Downey Jr. even make appearances in Favreau’s love letter to the simplicity of food truck cooking. With “Chef,” Favreau makes street food look just as delicious as high cuisine, as he crafts fantastic sandwiches and meats that rival anything one could find at a restaurant. (Available on Netflix)

‘Cloudy With a Chance of Meatballs’From Christopher Lord and Phil Miller—the team behind “21 Jump Street” and “The Lego Movie”—“Cloudy With a Chance of Meatballs” tells the story of Flint Lockwood (voiced by Bill Hader), a hopeful scientist whose latest invention turns water into food. Like all of Flint’s inventions, however, this machine goes haywire, as food starts raining from the sky. Flint has to stop the world from getting destroyed by giant foods crashing down. But despite the world-destroying food, “Cloudy With a Chance of Meatballs” is a hilarious and thoroughly entertaining animated adventure from two of the best comedy writers and directors working today. And who wouldn’t love to have food—no matter how big—falling from the sky? (Available on Hulu)

‘Jiro Dreams of Sushi’This fascinating documentary follows Jiro Ono, an 85-year-old sushi expert who runs a 10-seat restaurant in a Tokyo subway station that has become world-renowned. Ono makes sure that every aspect of his handpicked tasting menu is perfect, with employees dedicating themselves to one specific aspect of the food and perfecting that food over the course of years. Even if you’re not a fan of sushi, the care and love that is put into this food will make you want to get a plane ticket to Japan to try Ono’s gorgeous plates. (Available on Kanopy)

‘Knife Skills’Nominated for best documentary short at the 2018 Academy Awards, “Knife Skills” shows the transformative power of food. “Knife Skills” follows a group of former prisoners who are taught how to work in a kitchen for a French restaurant almost entirely run by ex-cons. With only a few months to learn their new craft, many of the students go from uncertainty about their futures to gaining impressive skills that will help them as they move forward to the next chapter of their lives. (Available on YouTube)

‘Lady and the Tramp’While not technically a film about food, “Lady and the Tramp” does feature one of the absolute best food scenes in movie history. The candlelit alley dinner between the title dogs over a plate of spaghetti and meatballs is some of Disney’s finest work. Without any words—except the lyrics of “Bella Notte” that hover over the scene—we see how much these two characters have fallen for each other, a beautiful and sweet moment that is arguably the most romantic sequence ever in a Disney animated film. (Available on Disney+)

‘Ratatouille’Has there ever been a better film that shows the joy of cooking and the tremendous power of cooking than Pixar’s “Ratatouille”? The cooking done by Remy (voiced by Patton Oswalt) is so inspired, so overwhelming, that it’s easy to forget that it’s being cooked by, you know, a rat. “Ratatouille” is particularly lovely when we get to watch Remy in the kitchen perfecting his art, and is surprisingly powerful when we see how the title dish transforms the food critic Anton Ego (voiced by Peter O’Toole) in the film’s conclusion. If you say you wouldn’t try Remy’s ratatouille at the end of this film simply because he’s a rat, you’re wrong. (Available on Disney+)

‘Tampopo’In what is called a “ramen western,” a fun play off the term Spaghetti Western, “Tampopo” is an endearing comedy about a pair who decide to make the greatest noodle soup shop. While “Tampopo” goes in all sorts of strange directions and deviations, the plot always centers around the idea that food is life with some unbelievably delicious-looking food. Sweet without being saccharine, quirky without becoming obnoxious, strange without feeling foreign, “Tampopo” is an elegant mastering of exact styles, like trying to find the right temperature to cook noodles. Everything is in the exact correct form it should be. (Available on Criterion and HBO Max)

‘Willy Wonka and the Chocolate Factory’When watching eccentric candy maker Willy Wonka (Gene Wilder) show off his factory/world of pure imagination, it’s easy to see how a group of children would put themselves in danger to try the most insane treats ever made. Whether it’s a chocolate river or a gum that tastes like a three-course meal, who can blame these kids for letting their imaginations run wild? But despite the insanity of “Willy Wonka and the Chocolate Factory,” this madhouse of sweets works because of the wild performance by Wilder, and the overjoyed performance by Peter Ostrum as Charlie Bucket. It’s wild and weird, sure, but there’s also plenty of heart under all that candy. (Available on HBO Max)

BTS 'emotional beyond words' for live concerts in LA

BTS 'emotional beyond words' for live concerts in LA

This Thanksgiving weekend is offering a box office feast with two genres that have been lacking on the menu so far this year: family movies and non-franchise films aimed at adults.

Tom Hanks’ best acting partner may be an inanimate object.

Here's a closer look at a few family-friendly films that are coming to screens this week.

A pampered pooch and a streetwise dog fall in love in Disney’s “Lady and the Tramp.”

A Danish film, “Babette’s Feast” is about the almost magical meal a refugee from Paris cooks for the two sisters who are hosting her as well as their aging congregation.

John Leguizamo, Emjay Anthony and Jon Favreau star in ‘Chef,’ about a man who rediscovers his love for cooking.

‘Cloudy With a Chance of Meatballs’