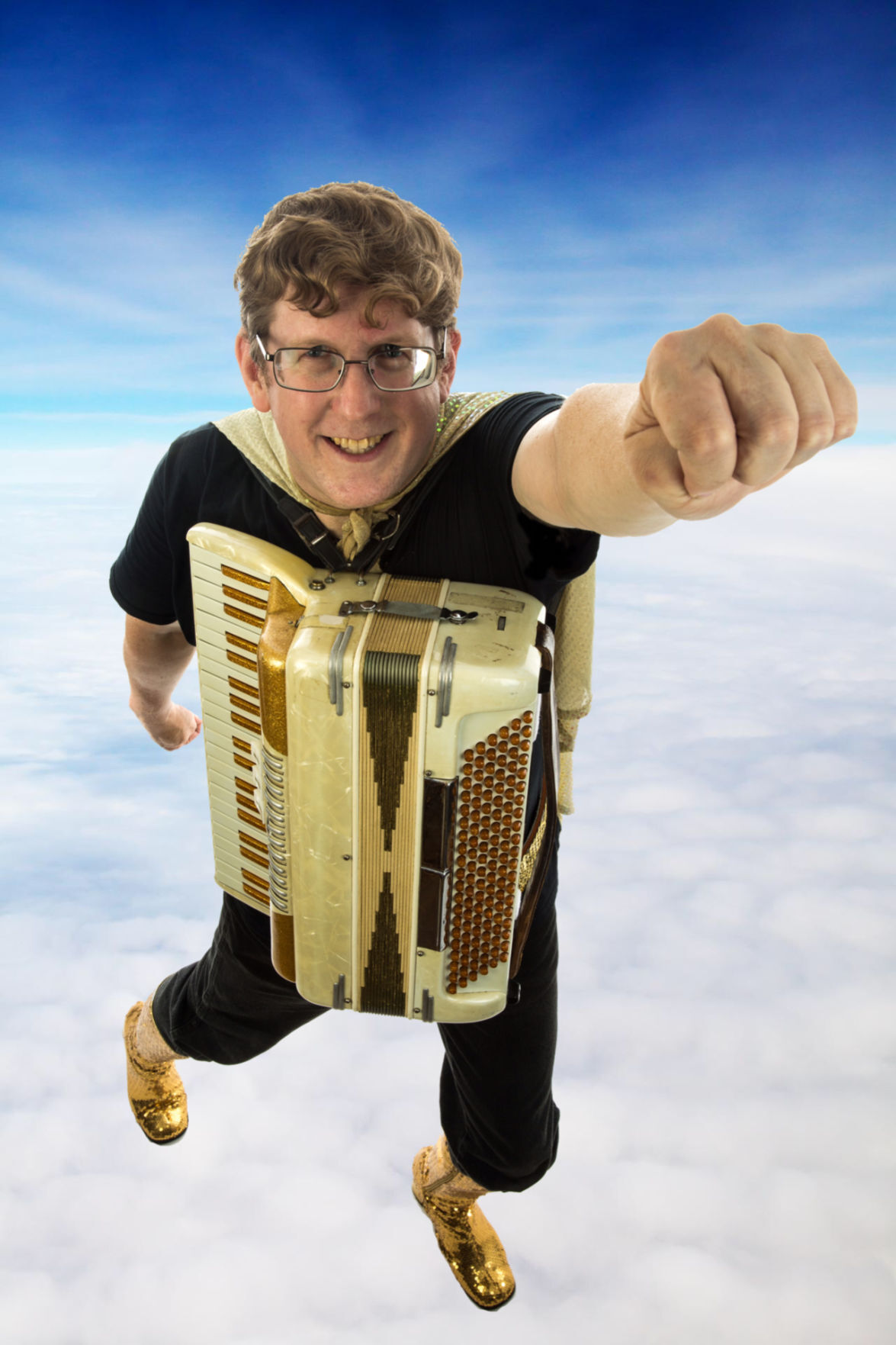 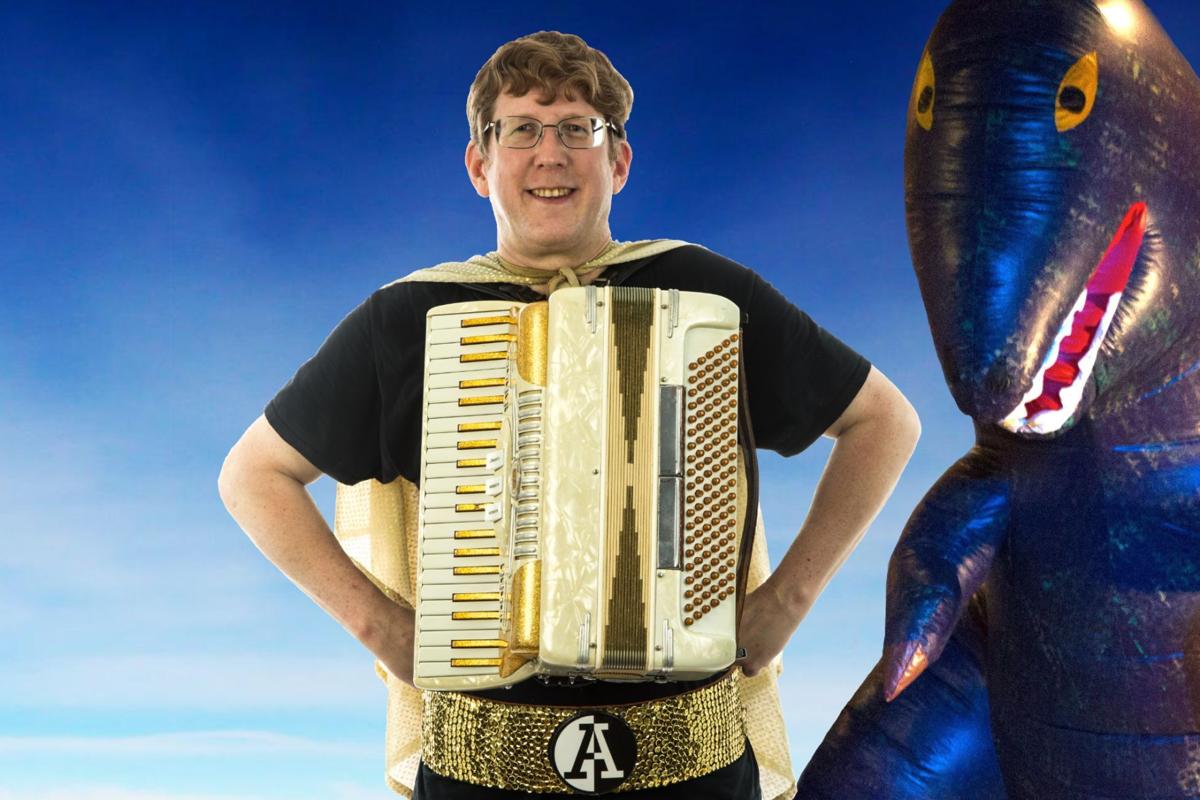 When most people see a guy playing the accordion, one of two things come to mind: polkas or “Weird Al” Yankovic. Dan Biemer, who performs under his superhero alias Captain Ambivalent, is trying to do his own style of music. While he writes novelty songs based on his humorous observations or the nerd culture he embraced in high school, he is no Yankovic knock-off.

“I would say my two biggest inspirations are ‘Weird Al’ Yankovic and They Might Be Giants,” said Biemer. “I try not to do the exact same that ‘Weird Al’ does. I don’t really like parodying current pop songs. I just focus on the originals. I was definitely inspired by him, but I’m trying to carve my own way a little bit.”

Biemer started his musical journey at the University of Chicago where he was pursuing an undergrad degree in Fundamentals: Issues and Texts (what he calls a do-it-yourself great books-type major). At that time, he was writing musical theater pieces and had several plays performed by the Blackfriars theater group.

“When I graduated I had to get a job to pay off the student loans and that left a lot less time to do musical pursuits, try to organize a band, let alone another show,” said Biemer. “So it forced me into solo performing.”

After years of working a day job in the corporate world, Biemer turned his attention to his character of Captain Ambivalent, releasing his first album “Fear the Accordion” in 2011.

“I pretty much do this full time,” said Biemer. “I owe a lot to my past self’s 20 years working at a corporate litigation law firm as a litigation support paralegal. That past self is subsidizing my current adventures.”

Biemer’s songs explore a variety of nerd culture favorites, such as “Dungeons & Dragons,” “Star Wars” and “Lord of the Rings.” He credits the popularity of the Netflix series “Stranger Things” with a revived interest in nerd culture.

“I think ‘Stranger Things’ helped repopularize [‘Dungeons & Dragons’] again for younger people,” said Biemer. “I know they have D&D clubs in schools now and the best thing in my view is that everybody is playing D&D now, and not just exclusively dudes back in high school, and it was exclusively white dudes, I think. Now everybody is getting into it. I think that is amazing.”

Based in Valparaiso, Ind., Biemer is located in polka country, but rejects the idea of limiting his chosen instrument by genre. Despite consciously distancing himself from polkas, his latest single identifies itself as a polka in the song title “She Takes Bad Selfies (Polka).”

“A lot of people hear accordion and they think polka in kind of a dismissive way. So I’m kind of the alternative, and I swore I’d never do polkas. They had me play at Pierogi Fest in Whiting, Ind., specifically as the accordionist who is not playing polka. It’s sort of the alternative act to appeal to the younger crowd I guess. But this song just arrived as a polka in my head. Putting it out by itself and giving it that genre let me try marketing it to see if any of the polka-specific podcasts or radio stations might be interested. ”

The song is a hilarious list of what-not-to-do when taking selfies and was based on a true experience.

“That was inspired by a friend on Facebook who consistently posted pretty atrocious selfies,” said Biemer. “There was one, in particular, that was at night and it was backlit and there were glowing eyes and it was blurry. So that was directly inspired.”

Biemer is bringing Captain Ambivalent to downtown Fredericksburg’s Recreation Center on Tuesday. While his albums feature what he calls a polka power trio (accordion, tuba, and drums), his show will be a solo act.

“I played piano and electronic keyboards,” said Biemer, “but accordion is the perfect thing for solo performance because it’s portable and you don’t get pinned behind it when you’re trying to sing and play at the same time the way you sometimes do with a piano where you’re looking over your shoulder at the audience.”

'Dune' is a smash for Warner Brothers at box office

'Dune' is a smash for Warner Brothers at box office

A lost and found fiddle

Musicians love to support each other. A great example happened on the first weekend of October.

Fredericksburg Symphony makes its debut with 'On Top of the World,' featuring Abigail Rockwell

As live performances return to stages around Fredericksburg—a new sound is joining the lineup.

Grammys CEO on a mission to regain music community's trust

Justin Taylor Band will open for rock legends Blue Oyster Cult on Saturday as part of the first-ever FredNats Oktoberfest at the ballpark.

Adele's new single, 'Easy On Me,' has finally dropped. So what's the verdict?

Reactions to Adele's new single are in. Listen to "Easy On Me" here.