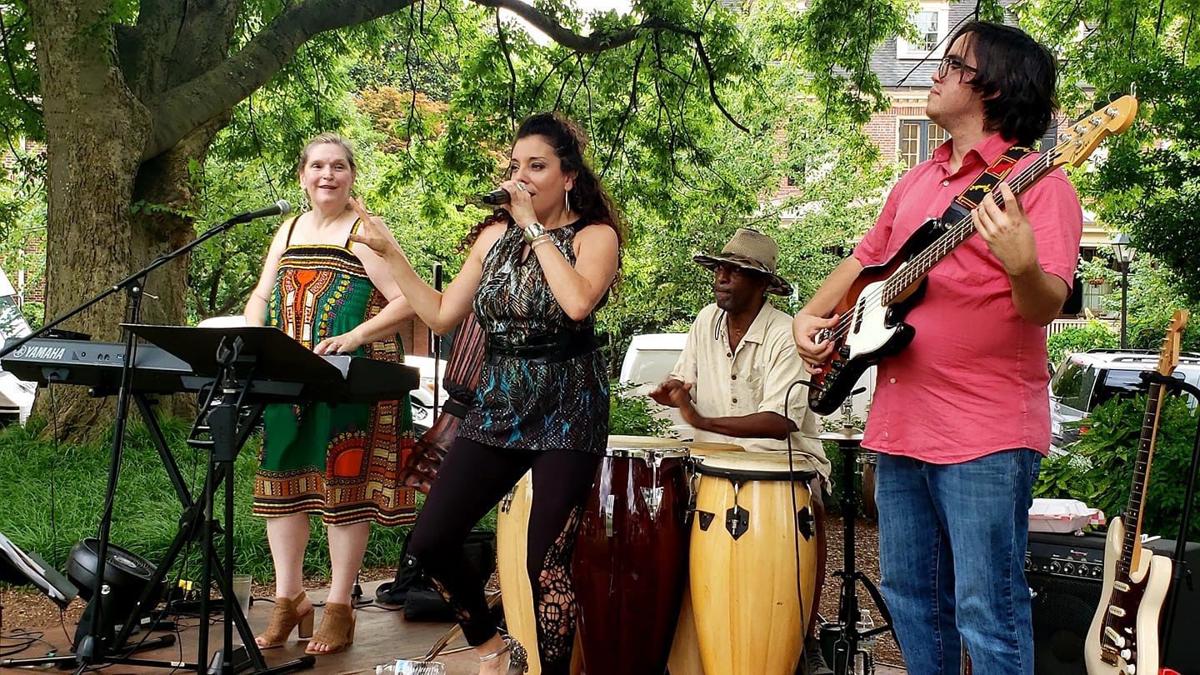 Spanglish Latin American Band will play online for the next Music on the Steps show June 29. The group performs a mixture of salsa, merengue, bachata, bomba and cha-cha-cha. 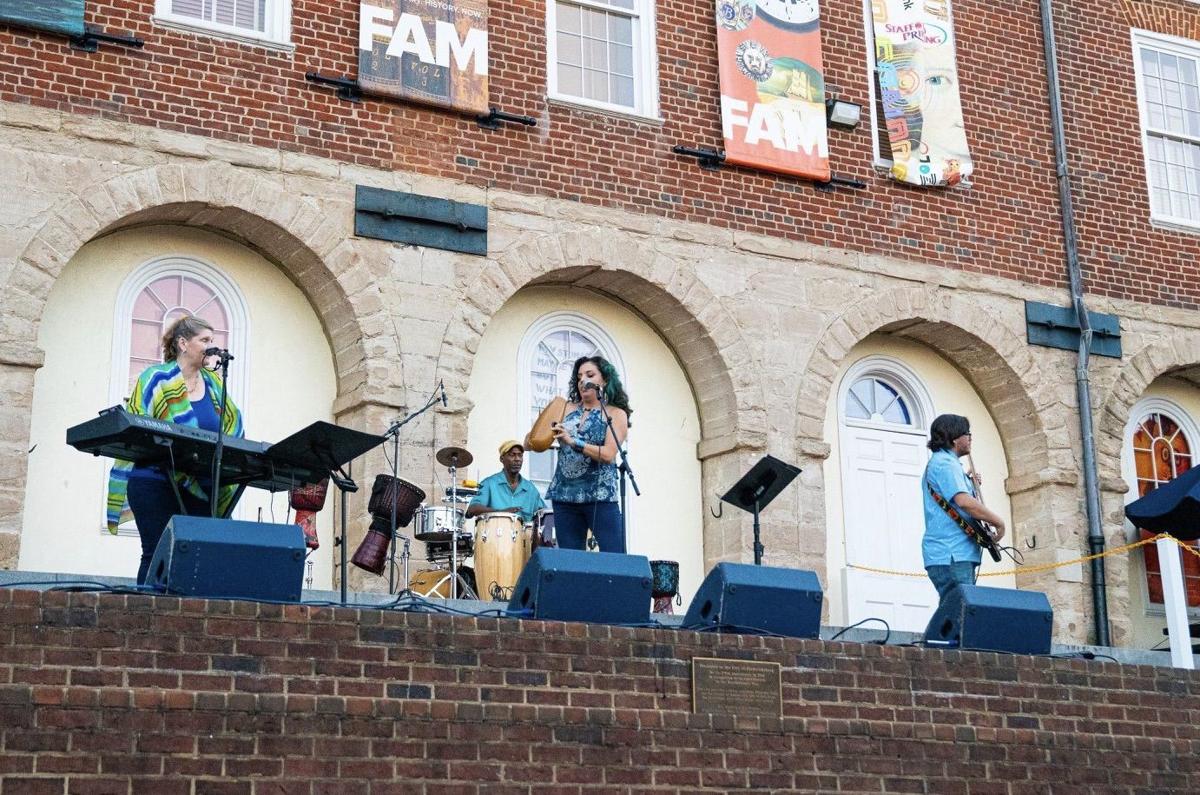 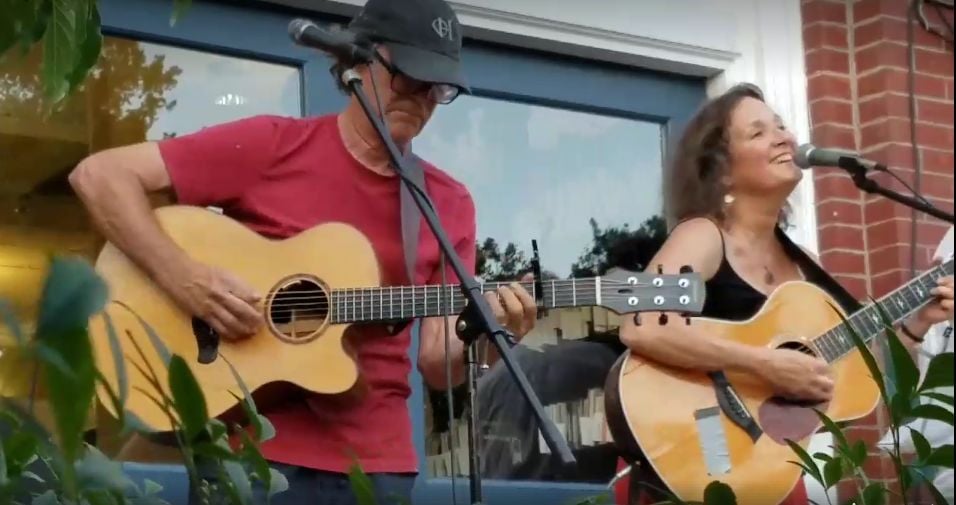 Laurie Rose Griffith and Peter Mealy kicked off the 2020 Music on the Steps season with a virtual concert from their home Monday.

Spanglish Latin American Band will play online for the next Music on the Steps show June 29. The group performs a mixture of salsa, merengue, bachata, bomba and cha-cha-cha.

Laurie Rose Griffith and Peter Mealy kicked off the 2020 Music on the Steps season with a virtual concert from their home Monday.

One of the most beloved concert series in Fredericksburg is the weekly Music on the Steps hosted every Monday night between June and September by the Central Rappahannock Regional Library at its Fredericksburg branch. When the weather is nice you could expect to see a large crowd forming in front of the library steps up to an hour before the start time at 7 p.m. The library started planning the 2020 Music on the Steps season last fall, lining up bands, negotiating schedules and preparing publicity.

“Then the whole COVID thing hit,” said Tracy McPeck, adult services coordinator, “and we said let’s wait and see how it goes because we don’t start until June. Time kept passing and we realized things were not really changing on our end and we had to make some changes and cancel all of our programs.”

At this point, the library has canceled the in-person concerts for Mondays in June and July and instead is offering a virtual version of Music on the Steps, webcast from the homes of the musicians who were scheduled to play. The opening concert was last Monday from Laurie Rose Griffith and Peter Mealy, who played live from their downtown home via Google Meet. Links were provided to stream the shows on the library website and social media accounts. A phone number was also listed so listeners could play the concert on their phones.

More than 40 people joined the online show, both locally and from other states. The event went well and comments during the performance were positive. The duo had originally intended to play on a stage in their backyard, but due to some thunderstorms Monday evening, they moved into their dining room with cameo appearances from their dog and one of their daughters.

The library regrets not being able to host live music this year, but the staff realized they could not safely hold the events on the library steps.

“We could probably provide some kind of barrier for the band,” said McPeck, “but then how do you block off a space? How do you limit how many people go in there, how do you make sure they’re far apart, or whether they’re wearing masks or not? There’s just no real way for us to guarantee that we’re providing adequate social distancing. We’re being very protective of our community and our staff. You can have a concert on in the background while you’re cooking dinner or maybe you’re just sitting outside on your porch. So you can still get a nice live concert experience even though you can’t be there in person.”

The next virtual Music on the Steps show will feature the Latin music group Spanglish on June 29 and will be webcast from the home of the band’s vocalist Elle Jay. Bands also need to be sure they are socially distancing while playing, so Spanglish plans to perform at an outdoor area.

“I love playing music with my Spanglish Latin American Band family,” said keyboardist Becky Stewart. “With all that is going on in the world, I am so glad for the opportunity to spread the love to our community through the healing, happy gift of music.”

The library has two Music on the Steps shows planned for July: string band Cabin Creek on the 20th and rock singer Nick McAlister on the 27th. The streaming information for those events, as well as archived recordings of the June shows, will be published on the library website and social media.

“We’re pleased that we can at least provide something for people because it’s our 35th annual Music on the Steps so we’ve been doing this for so many years,” said McPeck. “In fact, Peter Mealy has been doing this for 35 years. It’s a tradition we definitely don’t want to stop. Hopefully, a lot of people will embrace this because people are getting used to having to do things online. It’s a great way to do a little relaxation at home, too.”

Weekly Music On The Steps, Mondays at 7 p.m. Links and phone numbers to listen can be found at librarypoint.org/music-steps and on the Central Rappahannock Regional Library Facebook page. June 29 will feature Spanglish Latin American Band. See the website for future performers and dates.

The Harvest   (From “Days of Heaven")