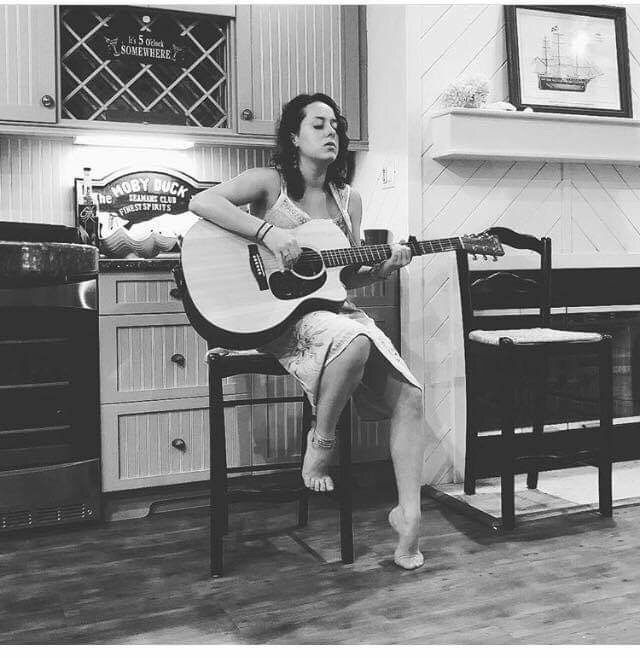 Still a high school student, Caroline Ayers has become a regular on the local music scene. 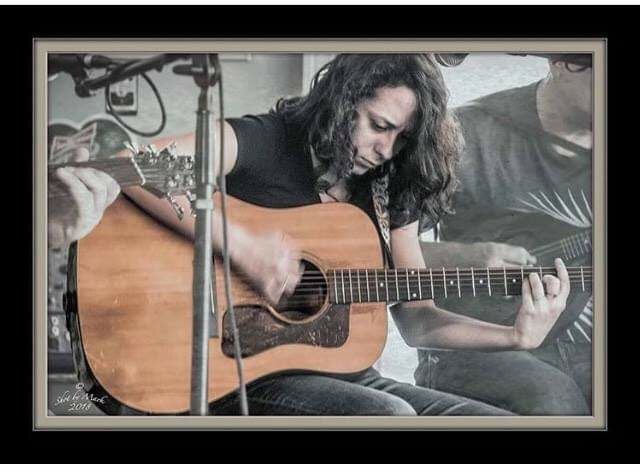 The moment that Caroline Ayers gets up on stage and sings, it is clear that the 17-year-old has talent beyond her years. The Riverbend High School student has been making a name in the Fredericksburg music scene since she first attended an open mic in 2015.

“The first time I went out and played I was with my last teacher, Brittany Frompovich,” said Ayers. “She pushed me to go out and play when I was 15. That was at Dougherty’s. I think the first song I played was ‘Proud Mary.’ ”

Initially, Ayers played violin in school orchestra and with a student string group led by Frompovich. She was drawn to the instrument because of her mother’s Cajun roots in Eunice, La., and knew the fiddle was just a violin played in a different style. Ayers continues to play the fiddle, but found that the type of music she wanted to play was guitar-based. Guitarist Mark Leigh is a blues musician in the area and has become a mentor and collaborator with Ayers. She learned some chords on her own, but Leigh gave her some additional help with technique.

“Mr. Mark Leigh has really taken me under his wing. I have been doing some gigs with him ever since,” said Ayers. “We ask other people if they want to play with us, then we work something up. My last gig I did with Steve Nilson. He plays bass, keyboards and guitar. He’s in Southern Explosion Band.”

“What I’ve been trying to do with her is get her with as many different musicians in town as I can,” said Leigh. “There are so many good musicians around here, so the more experience, the better.”

Those musical introductions have opened doors for Ayers, including a regular spot playing fiddle with local country band Whiskey Revival.

The vocalist from that band, Steven Bruce, was recording a version of “Rudolph The Red-Nosed Reindeer” for local rario station Thunder 104.5 and asked Ayers to provide fiddle. During the session Bruce asked if Ayers could record some songs on vocals, too. The station agreed and Ayers returned to record covers of “Santa Baby” and “Baby, It’s Cold Outside.” The latter was a duet with Bruce. The songs were played on the air and also included in the “Homegrown Holiday Spotlight” CD which was used to raise donations for the Salvation Army Shoe Fund.

Ayers’ choice of songs to play reflects her broad tastes and range of styles.

“It’s Americana, some blues, some folk—kind of a mix,” said Ayers. “I see a relationship between rock and country and blues. I don’t know what it is, but I think they all have a similar stream of emotion that goes through all of them.”

“I wanted to give her no judgement, just what would you like to do, and I’ll help you do it,” said Leigh. “She has such a wide variety of songs that she covers. We’re doing stuff by Etta James, Amy Winehouse, Janis Joplin, and Carole King. She is doing Bonnie Raitt and The Beatles. We did a video of her doing ‘Something’ by The Beatles. She did all the guitar. I taught her some of the leads so she learned the key phrases, so she plays that and sings.”

When asked about her preference for older music, Ayers credits her parents for shaping her musical tastes.

“My mom and dad played that music a lot. Whenever my dad picked me up from preschool we’d listen to The Beatles in his car. As I got older I felt like the music was so authentic. That’s so rare nowadays in pop. I think pop music today is fun, but there is no deeper meaning to it.”

Ayers also enjoys writing and hopes to merge that into her music and start creating her own songs.

“It’s just a matter of piecing them all together,” said Ayers. “I’m still working that out. I have things lyrically that are finished, then I have some melodies, but I haven’t combined them yet. I’ve been studying music theory in school and Bruce Middle is teaching me guitar, so I’m figuring stuff out. My biggest inspiration for writing musically is stuff like Traffic, The Kinks, and Cream.”

Ayers has a headline show coming up Jan. 22 at The Colonial Tavern. She will be joined by Leigh, Nilson, and drummer Dave Nichols. She is also entered in a contest at The Rock & Roll Hall of Fame in Cleveland, Ohio, on Jan. 26 called the High School Rock Off with prizes that include music scholarships and funds for her high school music program.

“She’s well-rounded,” said Leigh. “She’s got a lot to learn, but she can do it. She’s getting really good tutelage around here because everybody wants her to play with them. If she wants to play and she’s in the house, they say, ‘come on up.’ ”

ACM Awards 2020: Check out the list of winners and scenes from the show

Entertainer of the year, the top ACM prize, was presented last and produced a surprise. Here's the full list of winners as well as photos from the night's festivities.

ACM Awards brings live performances back to TV. Here's a look at who's nominated and what to expect

At the Academy of Country Music Awards on Wednesday, there won't be fake fans, canned applause or pre-taped acceptance speeches. Here's a look at what to expect.

'The Best of Cher': Why her '70s variety show is still so bingeable

These nine DVDs collect a nice chunk of the icon's work, from Vegas concerts to TV appearances. Most bingeable are 10 episodes from her 1975–76 variety show. Here's why.

Hip-hop artist Zane Neale recorded a new album, "Life in a Spiral," during the pandemic.

Still a high school student, Caroline Ayers has become a regular on the local music scene.