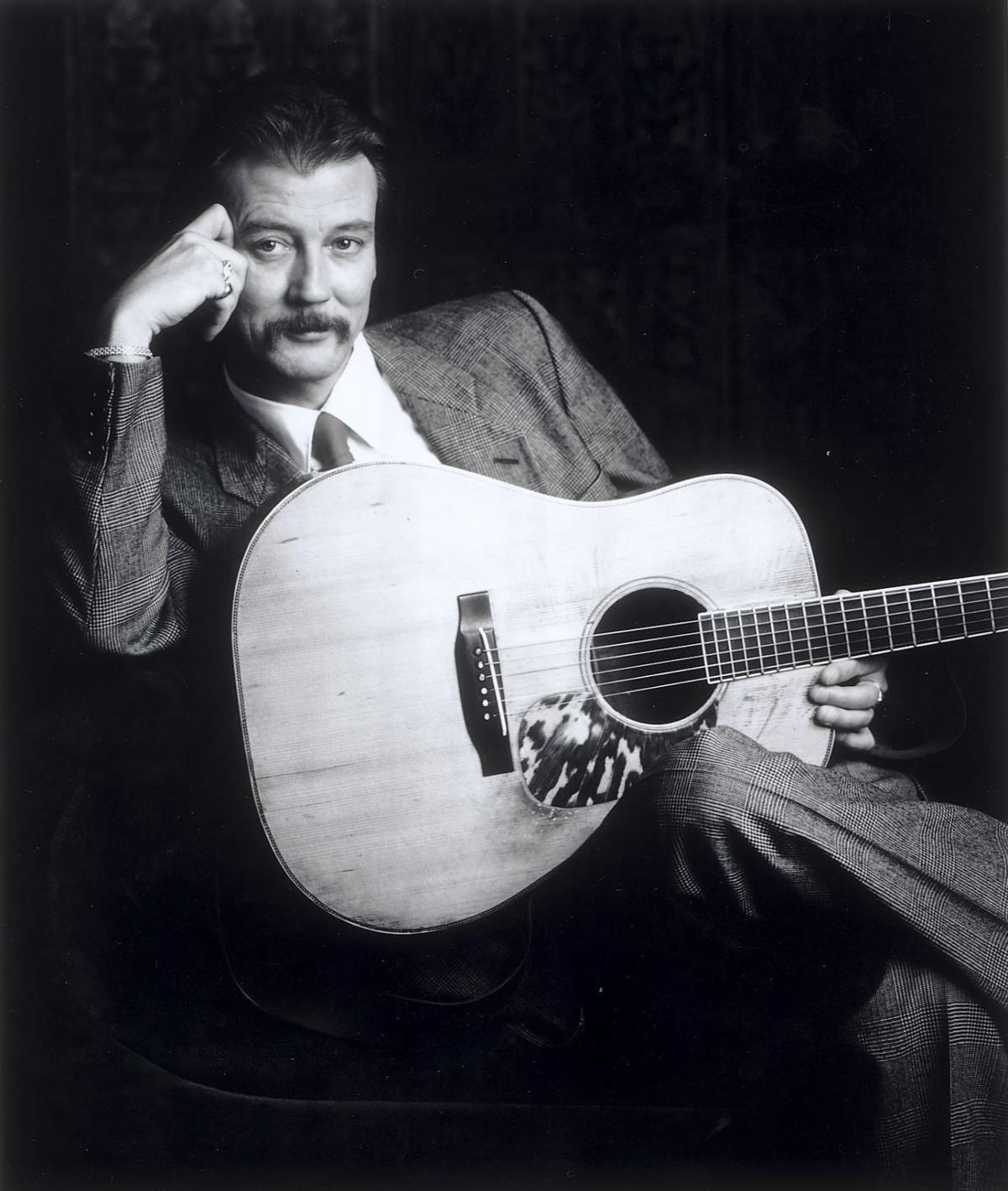 Tony Rice played with a number of local musicians, including Jay Starling and Ben Eldridge. 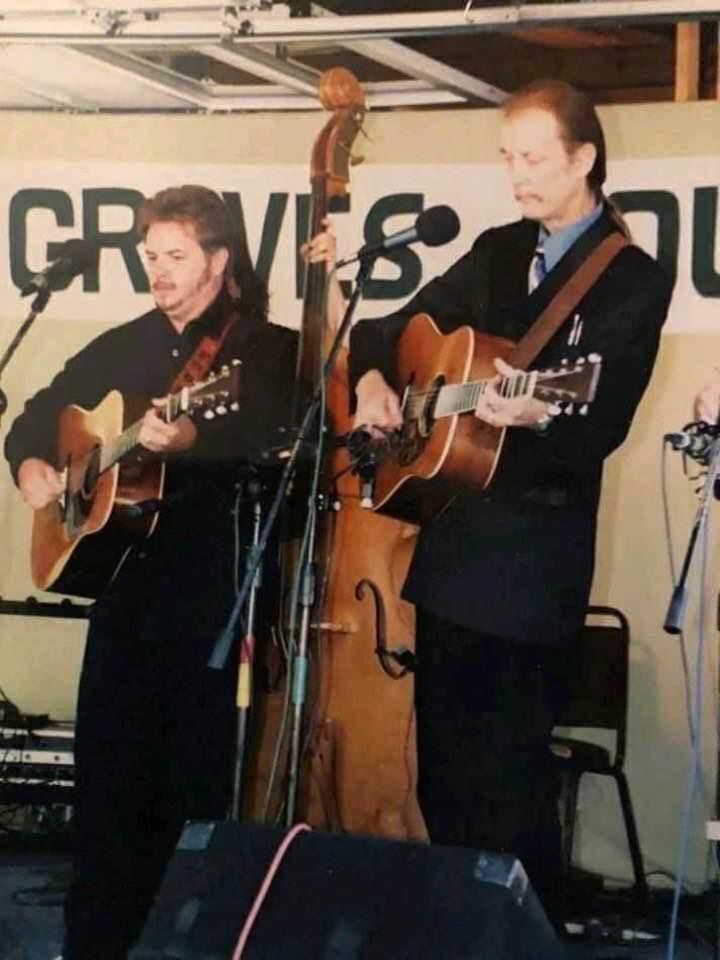 Mark Newton (left) and Tony Rice playing together at the Graves Mountain Music Festival in Syria.

Tony Rice, who died Dec. 25 at age 69, was one of the most influential acoustic guitarists in American music, and had strong ties to the Fredericksburg area.

He first made his name as a member of JD Crowe and The New South and later as a solo artist and collaborator with David Grisman, Ricky Skaggs, Norman Blake, Peter Rowan and many others. His playing technique, style and taste went beyond the established confines of bluegrass and expanded the guitar’s role in the genre. Rice influenced nearly every bluegrass guitarist who followed him, and also many in rock and folk music. He was also a fine singer, although he lost his singing voice in the later part of his career due to a chronic condition known as muscle tension dysphonia.

Rice touched many in the Fredericksburg bluegrass community. Mark Newton, a bluegrass musician and Fredericksburg native who now makes his home in Nashville, remembers meeting Rice for the first time in the early 1980s while Newton was a member of The Virginia Squires, which included Sammy Shelor, and brothers Ronnie Simpkins and Ricky Simpkins.

“One night Sammy and I were standing there at this festival in Florida,” said Newton. “[Tony] moved to Crystal River, which was only 20 miles from where the festival was located. We knew his brother Wyatt real well. So Sammy and I were standing there and we saw Wyatt, and standing right by him was Tony. Sammy and I looked at each other and thought we had seen the Holy Grail because we couldn’t believe it was him. So I went around and told Ricky and Ronnie. I guess Wyatt had told him about the group. Tony made it a point to come to the festival and he sat in with us. Pretty much from that point forward we started a friendship. Ricky and Ronnie later on joined the Tony Rice Unit.”

Newton had a regular gig at The Cedar Post in Stafford and occasionally Rice would drop in and play.

“If he was coming through the area, he would touch base with Ricky and all of a sudden here he is,” said Newton. “He would show up and it was like Elvis just entered the building. He made you do better. You just wanted to play so well with him that you wanted to get on your ‘A’ game all the time. He raised the bar for a lot of people worldwide.”

Newton would go on to tour as a member of Rice’s band, and Rice would reciprocate by appearing on two of Newton’s albums—“Living A Dream” and “Follow Me Back to the Fold.”

“It was fun to be able to get in an environment like that with him and watch the master go to work,” said Newton. “He made you feel so at ease that you didn’t really think about his skill. He just made you feel very comfortable.”

Jeff Covert is the owner and engineer at Wally Cleaver’s recording studio in Fredericksburg. In 1994 he was an assistant to the original studio owner Peter Bonta when Tony Rice came into the studio to record an album with banjo player Mark Johnson. Rice’s brothers Larry, Wyatt and Ronnie were also part of the sessions.

“Tony was amazing and really nice,” said Covert. “What he played on guitar was amazing. I totally got why Tony Rice was always spoken with air quotes. He was so relaxed and chill—you wouldn’t have known at all that he was a big shot. He was there doing his job like I was.”

Jay Starling is a multi-instrumentalist who has been playing Dobro with the group Love Canon. His father, John Starling, died in May 2019 and was a founding member of the groundbreaking bluegrass group The Seldom Scene and a good friend of Tony Rice. John Starling produced Rice’s second album “California Autumn” in 1975.

Jay remembers attending The Graves Mountain Festival, where his dad was playing with The Seldom Scene and Tony Rice was also on the lineup.

“My dad said, ‘You gotta come out front. You gotta watch this.’ He was very adamant about me watching Tony. I was probably 12 or 13.”

A year later, Jay Starling got to play onstage with Rice, who was sitting in with John Starling’s group.

“My dad had gotten me a lap steel, so that would have been in ’94. There was a Milton Harkey bluegrass festival, I think it was Bluegrass First Class. It was another John Starling and Friends set. I played two tunes, one on a Stratocaster. I’m up there with Tony Rice with a Stratocaster, how sacrilegious is that? So I’m up there doing a little warm-up lick. Then Tony plays a lick and gives me that little side look. It was that little sly look like, ‘What you got?’ I always appreciated that—it was pretty cool. Then I got to hang with him backstage. I got to play guitar for him and he was very encouraging.”

Years later, Jay Starling got the opportunity to play Dobro with Tony Rice on a number of occasions. Rice was a big fan of The Seldom Scene and his vocal style owed a debt to John Starling.

“From what I gather, my dad was Tony’s favorite singer and probably vice versa,” said Starling. “I think there was a big mutual admiration society there. Those are my two favorite singers in the genre. There was something about my dad and Tony that was more connected to folk. There’s more soul there. Those guys had the ability to make you believe or draw you into the lyrics. It didn’t sound like they were just singing a song, it sounded like they were telling a story. Selfishly, and sadly, I feel like I’m kind of losing another part of my dad with Tony, only because I think their voices were such kindred sprits.”

Another member of The Seldom Scene was banjo player Ben Eldridge. He also played on the session for the “California Autumn” album.

“We did that in Silver Spring and it was challenging for me,” said Eldridge. “There was a lot of stuff on there that was hard to play. Tony was real upbeat in the studio. He was a good guy, really pleasant to be around. It was a fun few days making that record, of course with Ricky [Skaggs] and Tony’s brother Wyatt.”

Eldridge also remembered a show where John Starling got upset at the staff at the Watermelon Park Festival in Berryville for towing his car, so he left the festival before the second Seldom Scene set. Tony Rice, whose band was also on the bill that day, agreed to fill in for Starling.

“We did it with almost no rehearsal,” said Eldridge. “It was a Sunday afternoon thing. We just flew by the seat of our pants, but it was good because he knew almost all of our stuff, so it wasn’t as hard as you might think. He was really fun to play with.”

Much has been written about Tony Rice’s mastery of his instrument and huge influence on bluegrass, but to those who knew him, he was also a mentor, a friend and a musician whose enthusiasm and love of music was fun and contagious.

Ben Eldridge summed up his feelings about Rice, “He was just a great guy and a wonderful musician. It was a blast. He was just a fun guy to hang out with, very personable.”

Phil Spector, the eccentric and revolutionary music producer who transformed rock music with his “Wall of Sound” method and who later was convicted of murder, has died. He was 81.

The legendary Betty White turns 99 on Sunday. Here's a look at how she's planning on celebrating as well as photos from her long and iconic career.

Tony Rice played with a number of local musicians, including Jay Starling and Ben Eldridge.

Mark Newton (left) and Tony Rice playing together at the Graves Mountain Music Festival in Syria.