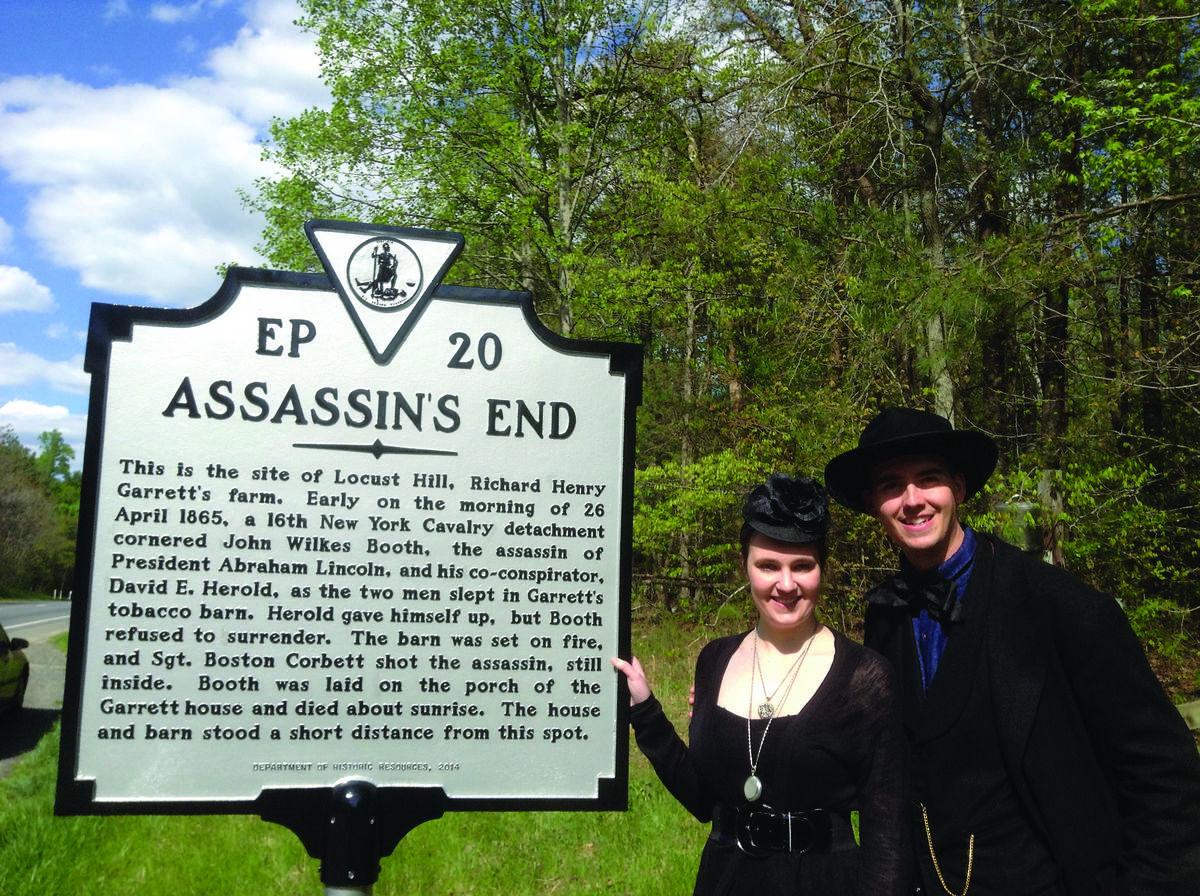 Lincoln assassination researchers Dave Taylor and Kate Ramirez pose beside the new marker on the northbound side of U.S. 301 about 3 miles south of Port Royal. 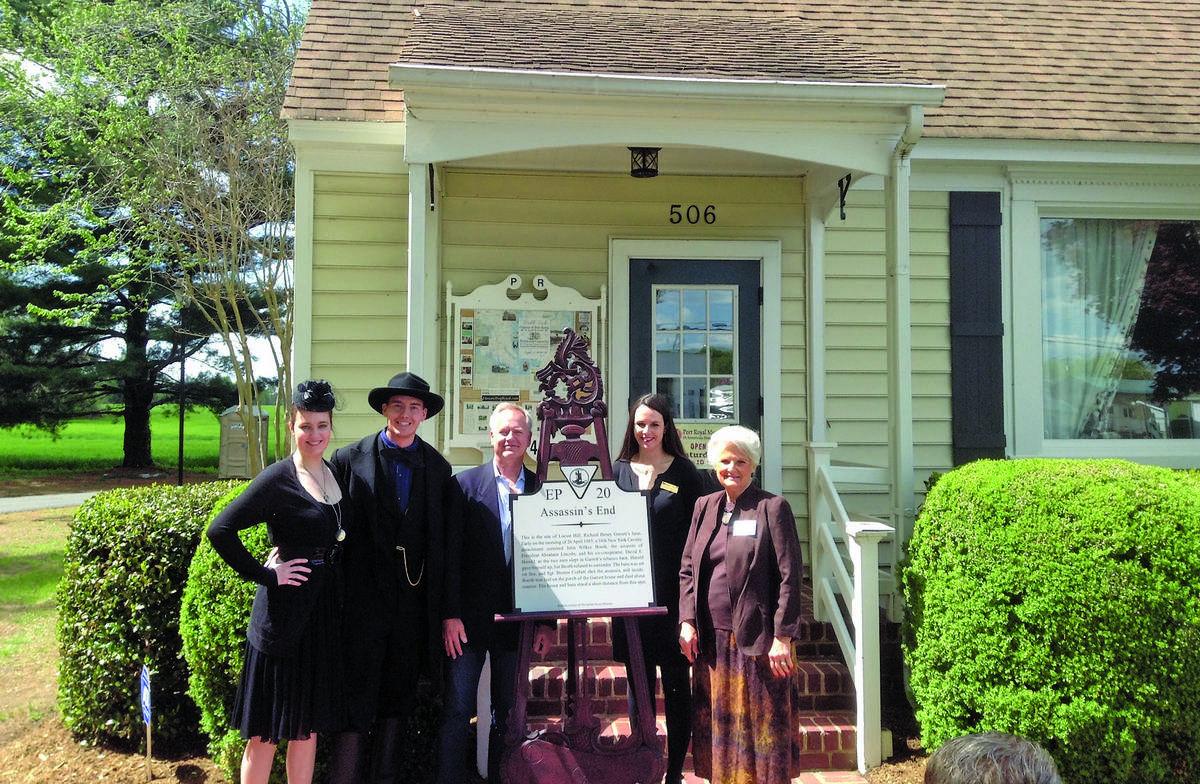 If one needs proof that, as novelist William Faulkner wrote, “The past is never dead. It’s not even past,” witness an event Sunday in Port Royal.

There, two dozen people gathered in the sunshine to dedicate a state historical marker for Locust Hill, the place where President Lincoln’s assassin was cornered 150 years earlier to the day.

It offered a reminder of the power of place, of stories, and of biography as a entryway into history.

As repugnant as John Wilkes Booth’s bloody deed is to millions, people have an undeniable true-crime fascination with the first presidential assassination and Booth’s escape from Washington, D.C., and eventual capture in Caroline County on April 26, 1865.

“You have to go into some dark corners to shed new light on history,” said Dave Taylor, one of the speakers during Sunday’s brief ceremony at the Port Royal Museum of American History to unveil a facsimile of the new marker.

Reaching into their own pockets, the society’s members financed casting of the $1,600 metal marker, which replaces a sign that disappeared in October 2014.

“When this one went missing, we were really fortunate that the Surratt Society stepped forward to sponsor and pay for the replacement,” Hare said.

The nonprofit society, in partnership with Prince George’s County, Md., operates the Surratt House Museum, which was a safe house in the Confederate underground that flourished in southern Maryland.

Titled “John Wilkes Booth,” the old marker had stood along U.S. 301 near the Garrett Farm site since 1937. Its replacement, titled “Assassin’s End,” updates and expands the sign’s text.

The wording was drafted by Taylor and Kate Ramirez, another Lincoln assassination researcher, and vetted by officials at the Historic Resources Department.

Taylor and Hare credited the late Arthur F. Loux, historian and author of “John Wilkes Booth: Day by Day,” as being an invaluable resource in the effort. His daughter, historian Jennifer Loux, ushered his book into print; coincidentally, she manages Virginia’s historical marker program.

Horn, the Surratt Society’s collections manager, said she thinks the nonprofit group’s role with the marker is “especially befitting because [the Surratt House] was Booth’s first stop after he assassinated President Lincoln, and we were able to help with his last stop. I think there’s a lot of symbolism there. We hope [history buffs] will work your way backward and come see us some time.”

There are two state markers in Caroline about Booth. The first is on U.S. 301 near U.S. 17, almost opposite Horne’s Restaurant.

The second, new sign indicates the vicinity of the plantation of Richard Henry Garrett, where a detachment of the 16th New York Cavalry—sent south from Aquia Landing in Stafford County during the furious manhunt for the president’s killer—found Booth and a co-conspirator, David E. Herold, as they slept in Garrett’s tobacco barn.

“Herold gave himself up,” the marker states, “but Booth refused to surrender. The barn was set on fire, and Sgt. Boston Corbett shot the assassin, still inside. Booth was laid on the porch of the Garrett house and died about sunrise.”

Booth, a handsome idol for playgoers and perhaps the best Shakespearean actor of his day, was also a Southern sympathizer. He initially planned to abduct Lincoln, then resolved to kill him upon hearing the president speak at the White House a few days after Robert E. Lee surrendered his army at Appomattox Court House.

For the Civil War’s 150th anniversary, the Port Royal museum has a special exhibit on the assassin that includes artifacts with Booth connections: an iron strap hinge from the Garrett barn, a “self-portrait” of Booth, and bricks said to have been salvaged from the Garrett house site.

People want to understand what motivated Booth and his fellow conspirators, said Taylor, an elementary school teacher in Maryland who leads tours of Booth-related sites and shares his knowledge via Twitter (@boothiebarn) and online forums.

“Booth wasn’t an isolated loner, a lone gunman,” he said. “He was a wildly popular and famous actor, and he threw all of that away to do this. I think that fascinates people.”

Opinions about the 19th-century stage headliner vary dramatically, of course. Reviled by many, he was a hero to some in the states of the former Confederacy.

At the base of the state’s new historical marker 3 miles south of Port Royal, in place just a short while, visitors last week had already left memorial pennies and Confederate flags—the latter since removed.

Over the weekend, Caroline County and the town of Port Royal hosted three days of special events interpreting the pursuit, capture and death of Booth. They included a special bus tour of the Booth escape route; a visit by the Virginia Civil War 150 HistoryMobile, an interactive, multimedia museum on 18 wheels; a lecture by Booth expert Terry Alford, author of the new book “Fortune’s Fool,” the first full-length biography of the killer; and appearances by Michael Krebs and Debra Ann Miller, living historians from Chicago who portray Abraham and Mary Todd Lincoln.

“This is the site of Locust Hill, Richard Henry Garrett’s farm. Early on the morning of 26 April 1865, a 16th New York Cavalry detachment cornered John Wilkes Booth, the assassin of President Abraham Lincoln, and his co-conspirator, David E. Herold, as the two men slept in Garrett’s tobacco barn. Herold gave himself up, but Booth refused to surrender. The barn was set on fire, and Sgt. Boston Corbett shot the assassin, still inside. Booth was laid on the porch of the Garrett house and died about sunrise. The house and barn stood a short distance from this spot.”

Since my wife and I had our second vaccination shots more than a month ago, we’ve slowly started to rejoin the human race, at least the part of it where we interact in person with others.

Katherine J. Marschall, a senior at Stafford High School, was selected to receive a $2,500 STAR Scholarship from the P.E.O. Sisterhood. She was recommended by P.E.O. Chapter BZ of Fredericksburg.

Their two-acre yard in Delaware has one of the largest collections of azaleas around — more than 1,700 shrubs.

Word on the Street: Experiencing the miracle of the kingdom

It is unfair that anyone’s daily survival would depend on another to make tough decisions about the role they might play, or not, in their very fragile lives.

Nicholas Sanders of Hartwood Troop 1717 has earned the rank of Eagle Scout, the highest rank in Scouts BSA.

Do you really need to drink 8 glasses of water a day? A scientist explains why your kidneys say 'no'

Should you drink eight glasses of water a day? An exercise physiologist says that in rare cases people can actually die from drinking too much water.

Lincoln assassination researchers Dave Taylor and Kate Ramirez pose beside the new marker on the northbound side of U.S. 301 about 3 miles south of Port Royal.