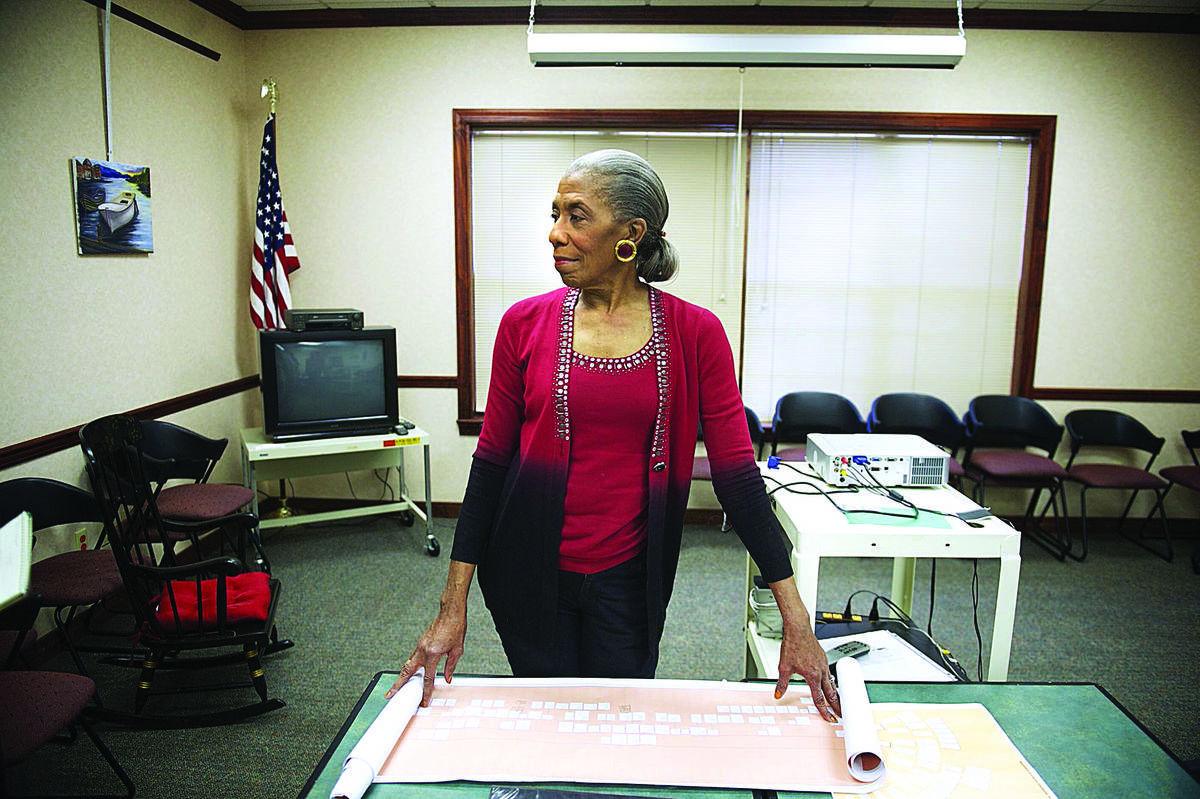 Bessida White unrolls a chart at the Essex Public Library showing names and birth and death dates of relatives. 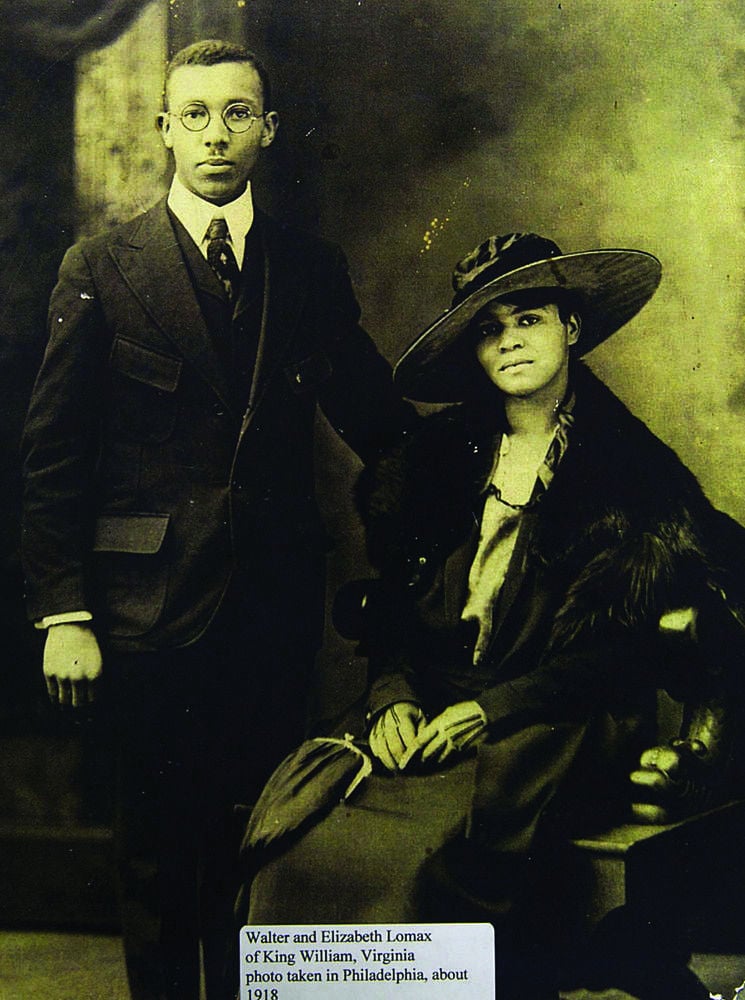 Walter and Elizabeth Lomax of King William, about 1918. 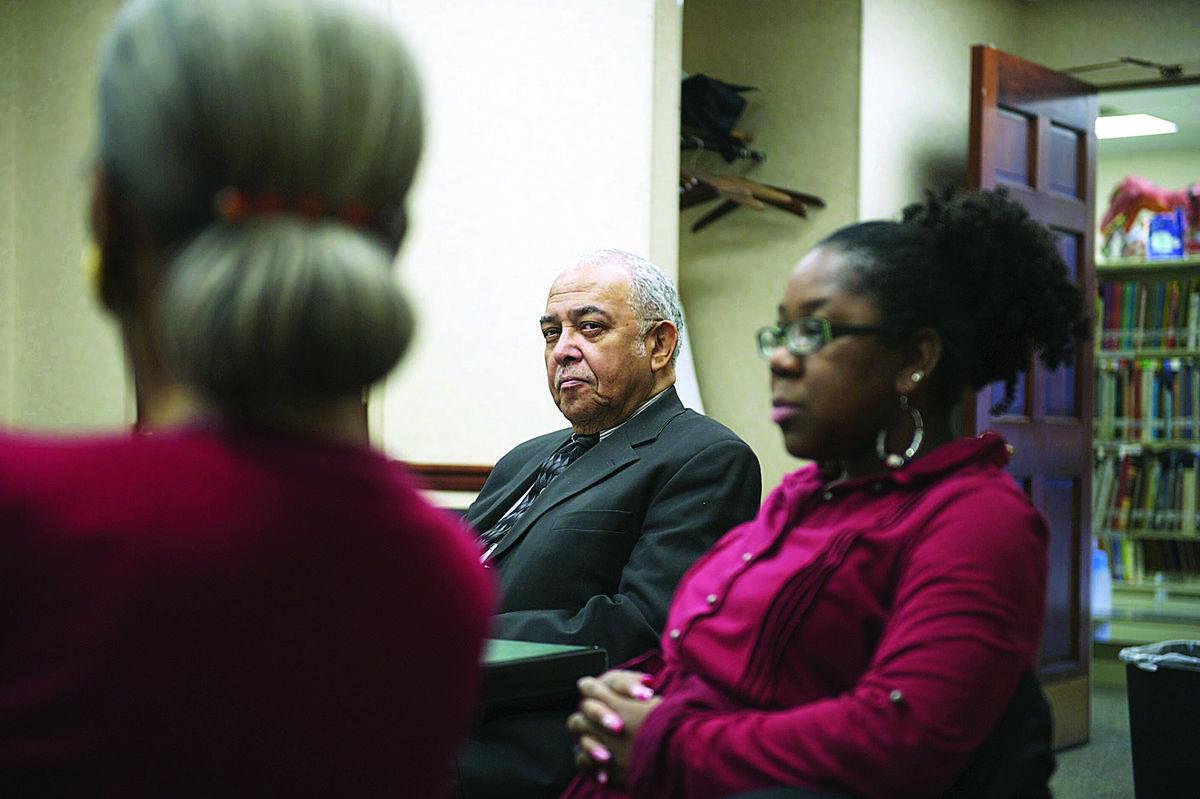 Dr. Alvin Lomax and Regina Blagmon are among those who research family historywith the Middle Peninsula African–American Genealogical and Historical Society. 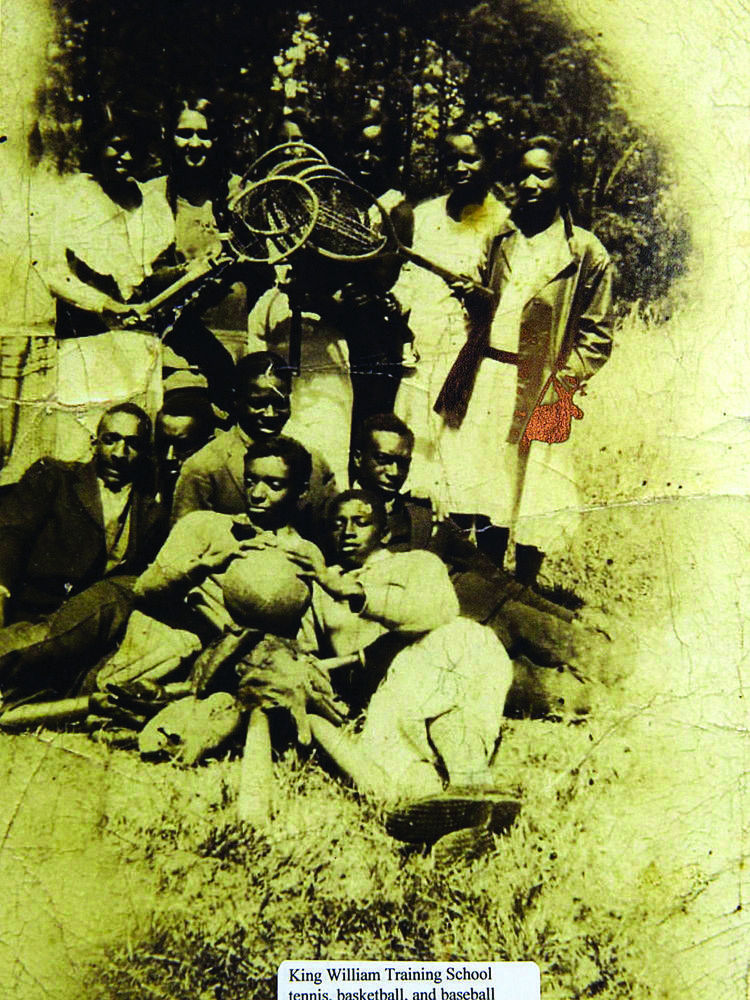 King William Training School, one of several trade schools for blacks, had various sports teams in the mid-1920s. 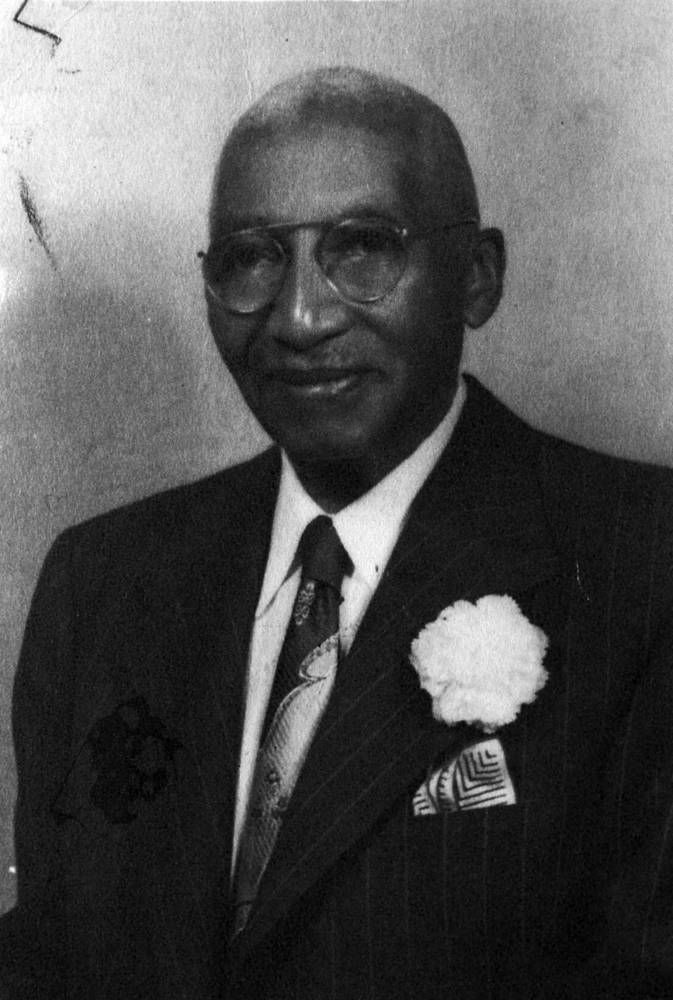 Millard Lomax (left) and Joseph Smith migrated north for work. Lomax helped other families make the move; Smith died before he could pay for property he purchased.

Those gathered around the table at the Essex Public Library would be the first to say that researching black history is packed with pitfalls.

When people try to find information on ancestors who were slaves, they won’t come across their names on the typical documents: censuses or property deeds, marriage licenses or death records.

Slaves were listed along with livestock and acreage as property, described simply as “Negro Susan and her three children.”

But there is hope.

Those who have connected the dots, all the way back to the Civil War and earlier, are glad to share their research tips with others.

“We seem to be the only game in town in terms of African–American genealogy in this part of the state,” said Bessida Cauthorne White. “That’s why we try to be as broad as possible in inviting folks to work with us.”

White is president of the Middle Peninsula African–American Genealogical and Historical Society of Virginia. When the group formed 14 years ago, members thought they would focus on families in Essex, Gloucester, King and Queen, King William, Mathews and Middlesex counties as well as the Northern Neck counties of King George, Lancaster, Northumberland, Richmond and Westmoreland.

They’ve broadened their scope to the point they encourage anyone, throughout Virginia and beyond, to share what they’ve found.

And the society has plenty of tips to pass along. Its website has a list of publications, indexes and databases about local historical sites and families as well as “free African–Americans of Virginia.”

It also maintains a list of surnames that have been researched. Anyone can add names to the list or contact others to find what they’ve learned.

“We have become the resource for so many families that have moved away,” said Dr. Ronnie Sidney, treasurer of the group. “Everybody is looking for information, but very few can find resources they can use.”

‘THIS IS YOUR FAMILY’

The information is out there, and “there are new discoveries every day,” White said.

As a few members of the society gathered in a meeting room recently at the Essex library, Bess Haile walked in with a book in her hand and a smile on her face.

The librarian carried a compilation of “Free Negro Records” in Essex County, put together by Suzanne Derieux and ready to go on the the shelves that day.

“This is exciting news,” Haile said. “This is your family, or some of you all’s family.”

Likewise, the King William Historical Society recently discovered 10 volumes of deeds and wills from Colonial days that historians thought had been burned.

DNA testing and research sites such as Ancestry.com have made it easier for people to find connections they never knew existed.

More states are publishing on the Internet searchable records of births, deaths and marriages—information that used to be accessible only in library research rooms.

And the Middle Peninsula group is working with FamilySearch International, the largest genealogy organization in the world, to have the names and biographies listed in African–American funeral programs part of a free searchable database.

FamilySearch is sponsored by The Church of Jesus Christ of Latter-day Saints.

Already, there are 10,000 programs in the database, and the Middle Peninsula society is asking black families to provide more. They’ll be collecting programs through March.

The effort focuses on funeral programs for black families because it wasn’t always easy for blacks to get obituaries published in local newspapers, White said. Even in current times, cost can limit the lengths of obituaries.

“Funeral programs don’t have those limitations,” she said. “You get a much richer picture of the deceased person.”

‘STRAIGHT UP THE COAST’

On the surface, King William County and South Jersey might not have much in common.

Researchers with the Middle Peninsula group would say otherwise.

In the decades after the Civil War, blacks leased land to support their often large families, said Dr. Alvin Lomax, a society member.

As economic conditions changed and segregation persisted in the South, many blacks headed North for better opportunities.

The movement was called the Great Migration and involved more than 6 million people, according to the History channel.

“Folks in this area were an active part of that migration,” White said. “They went straight up the coast.”

Lomax had a great-uncle, Millard P. Lomax, who worked for the railroad in Philadelphia. He was one of the Pullman porters, a group of blacks—often former slaves—who worked in the sleeper cars designed by George Pullman.

Lomax’s uncle left King William County in 1920 and encouraged others to join him. At one time, he had representatives from five different Virginia families living with him, Alvin Lomax said.

When one person found work in New Jersey towns such as Plainfield, Swedesboro or Woodstown, he’d send word back home, and others would follow.

A few members of the genealogical group recently attended a funeral in New Jersey.

They found so many relatives, “we might as well have been in Essex and King and Queen County,” White said.

Those migration patterns, along with Virginia’s records, make things easier for those looking for black history.

White didn’t know how good she had it in Virginia—which historically has included on marriage licenses the names of the couple’s parents—until she searched elsewhere and found the data lacking.

Plus, black families in the Deep South often migrated to cities all over the Midwest while blacks from central Virginia observed more “predictable patterns,” she said.

“Genealogy is never easy,” she said. “But for those of us who have lost ties with families, it’s so much easier for us to find them than folks from the Deep South.”

WEBSITE: The Middle Peninsula African–American Genealogical and Historical Society of Virginia suggests that people researching relatives in central Virginia check out their website, mpaagenealogicalsociety.org. It lists resources in the region as well as publications and online databases. HISTORIC COURT RECORDS, in the Fredericksburg Courthouse, list the names of free blacks in the region as well as names and owners of slaves found in court records. Website is historiccourtrecords.org. THE CENTRAL RAPPAHANNOCK HERITAGE CENTER archives documents and photographs from the Fredericksburg region. Its website is crhcarchives.org. NEIGHBORS: Large families often settled in the same area, so those who find one relative often can unearth more by looking next door. Ronnie Sidney’s family lived in Petersburg near Richmond, and eight of his grandmother’s 10 children lived within a four-block radius of her. GRAIN OF SALT: Be prepared for misspelled names, wrong ages and other inaccuracies when checking public records. Bessida Cauthorne White spent 15 years “barking up the wrong tree” before she discovered her relative’s name was Ella Wildman, not Ella Wilds. She advises people to take all information, through oral histories or public records, with a grain of salt.

The Middle Peninsula African–American Genealogical and Historical Society of Virginia meets at 11 a.m. the second Saturday of each month, except July and August, at the Essex Public Library in Tappahannock. It’s next to Tappahannock Elementary School. More information is available at the group’s website, mpaagenealogicalsociety.org, or by calling 804/651-8753.

A rare gem has emerged in Fawn Lake and it is more than ready to be scooped up.

Busch will pay your pup $20,000 to be official dog brew taster

Busch is sniffing around for a "chief tasting officer" for its Dog Brew, a canine-friendly, alcohol-free bone broth. It comes with a $20,000 paycheck.

IN NATURE>> Spring in Fredericksburg

An osprey dives into the Rappahannock River for breakfast on a foggy spring morning between City Dock and the rail bridge in Fredericksburg on March 25, 2021.

The fire sale of crumbling Italian houses for about a dollar each has been a gift for those with good home improvement skills. But everyone else could only look on in envy — until now.

If you could be one age for the rest of your life, what would it be? A developmental psychologist explains how a period of life that's often hectic and stressful can also end up being quite rewarding.

Prince Philip died at 99. Living to such a ripe old age isn't unusual for UK royals. Nor is it surprising, argues an expert on aging and longevity.

Hedelt: Columnist is happy not to keep up with the Kardashians

Ask the Builder: Don't take your contractor to court; do this instead

How many horror stories have you heard about homeowners who want to sue their contractor? These disputes arise for numerous reasons, but in almost all cases it comes down to defective workmanship. Sometimes it’s non-performance, when the contractor vaporizes and stops showing up at the job. In rare cases, it’s actually fraud in which the contractor takes a deposit and disappears.

The cities spending the most on residential construction

One of the major housing market trends that has emerged from the COVID-19 pandemic is a preference for single-family housing, and this increased demand is driving a surge in new home construction.

Bessida White unrolls a chart at the Essex Public Library showing names and birth and death dates of relatives.

Walter and Elizabeth Lomax of King William, about 1918.

Dr. Alvin Lomax and Regina Blagmon are among those who research family historywith the Middle Peninsula African–American Genealogical and Historical Society.

King William Training School, one of several trade schools for blacks, had various sports teams in the mid-1920s.

Millard Lomax (left) and Joseph Smith migrated north for work. Lomax helped other families make the move; Smith died before he could pay for property he purchased.