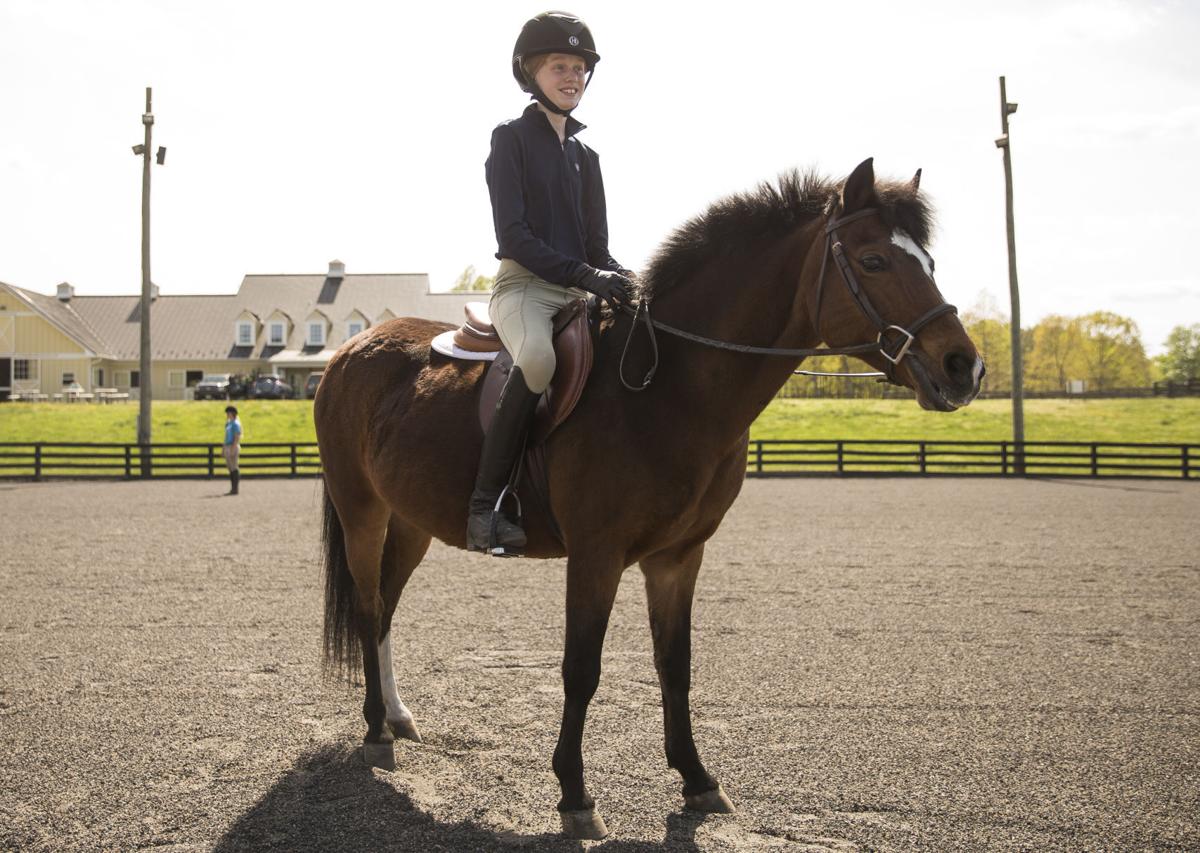 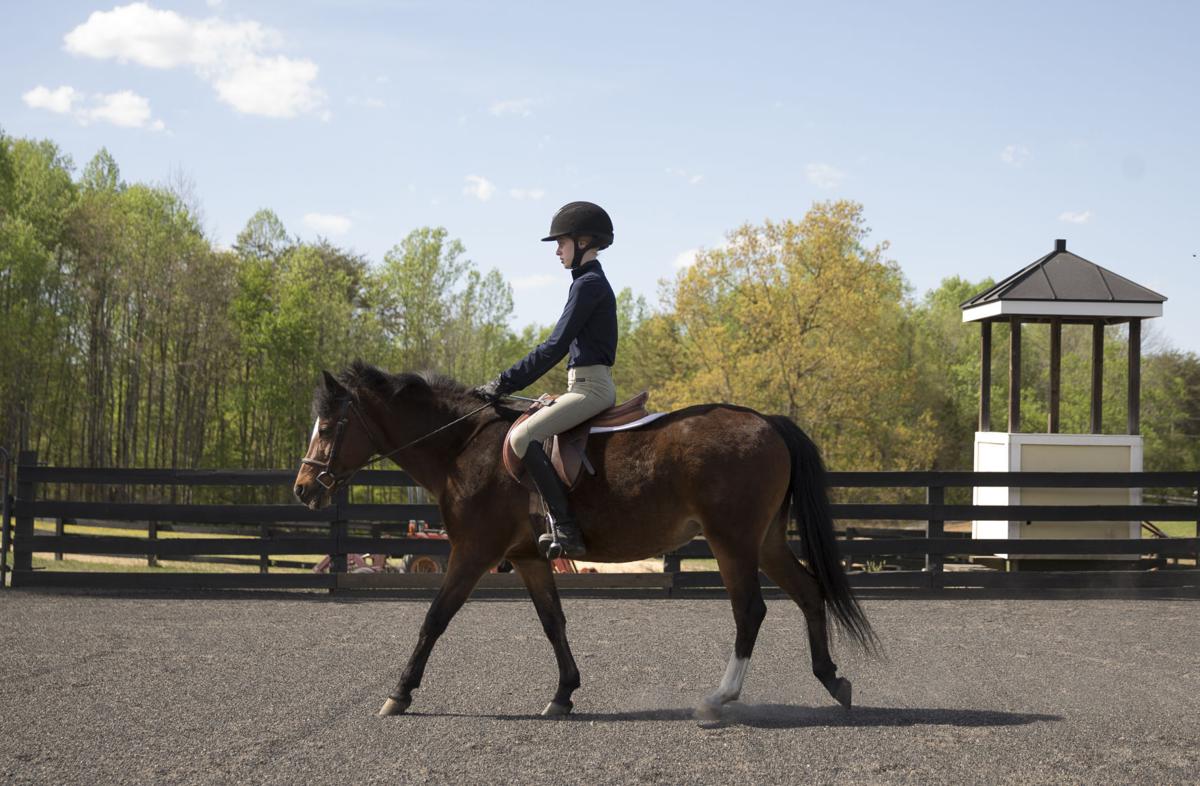 Koelber Hawley says best pal Meg (riding Jasmine, above) is ‘only the second one on our team ever to make it’ to the national stage. Take that, fears! 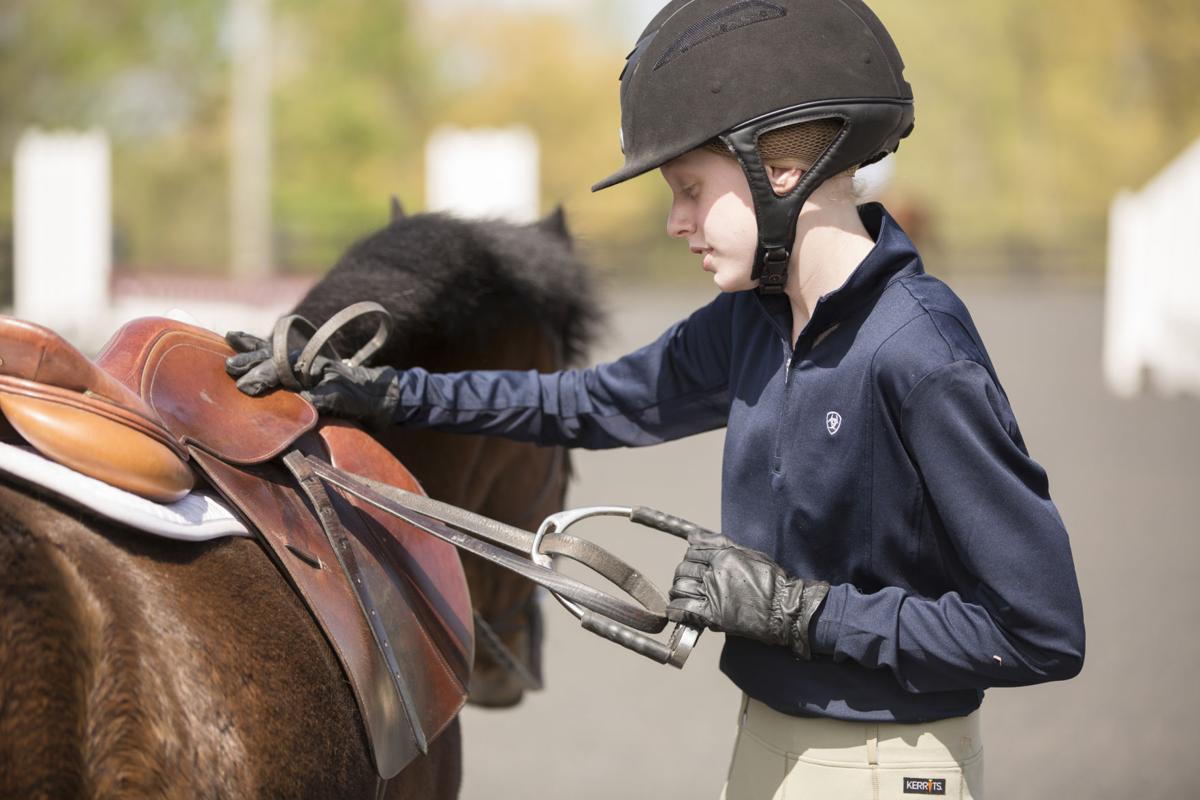 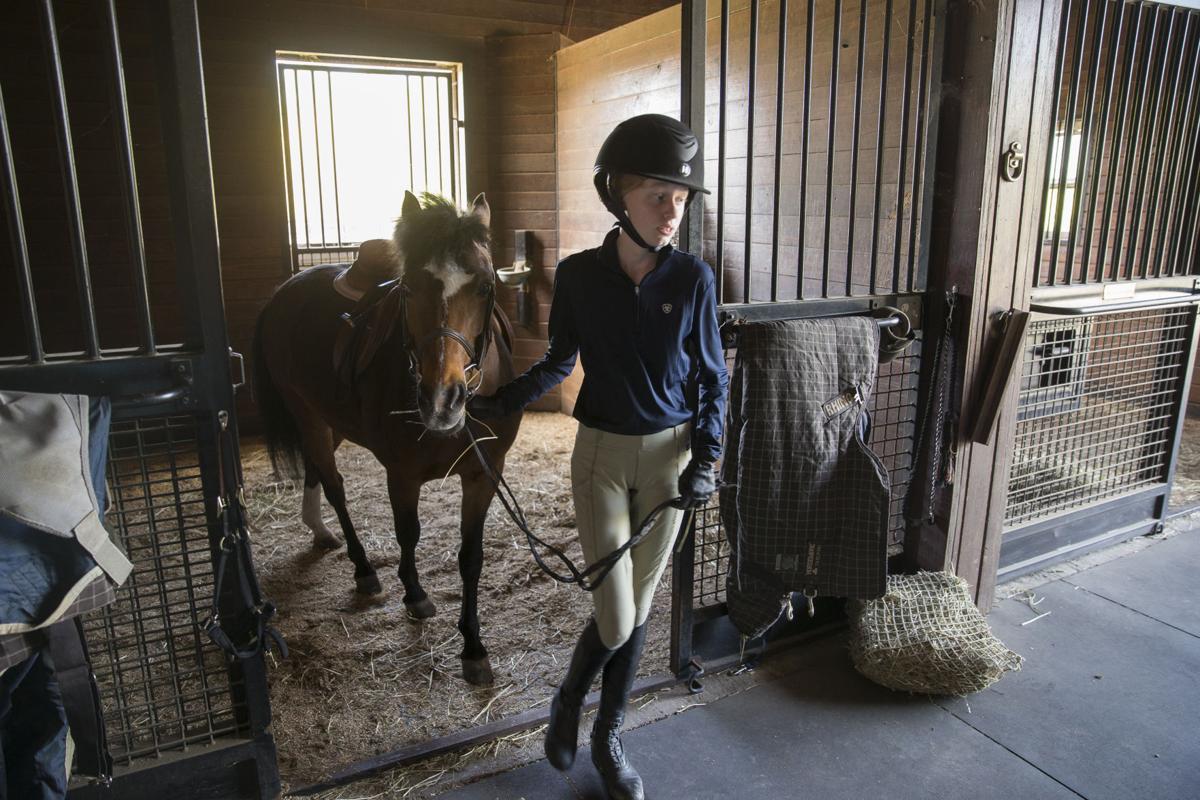 Meg Bonner leads Jasmine outside at Whitestone Farm in Spotsylvania. She worked with coach Carol Hawley to gradually conquer her fear of horses. 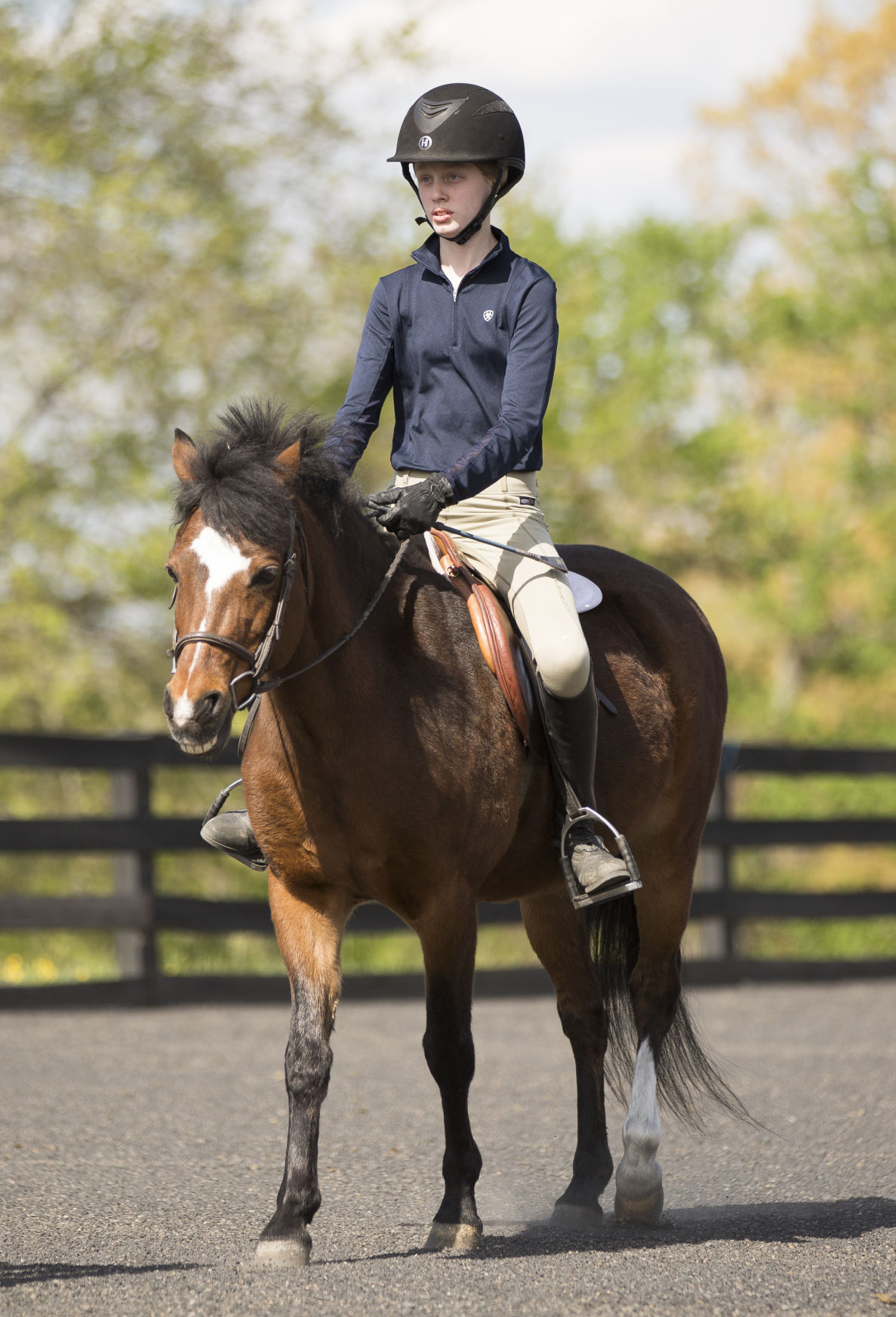 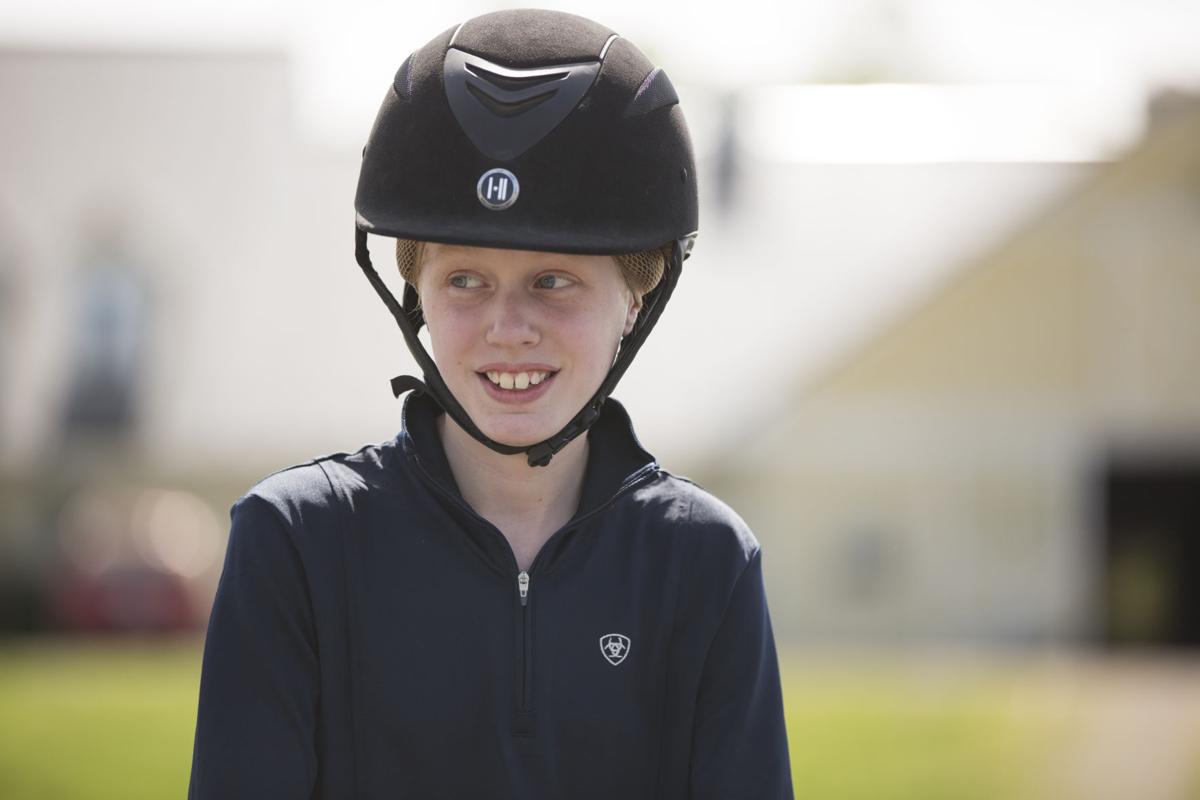 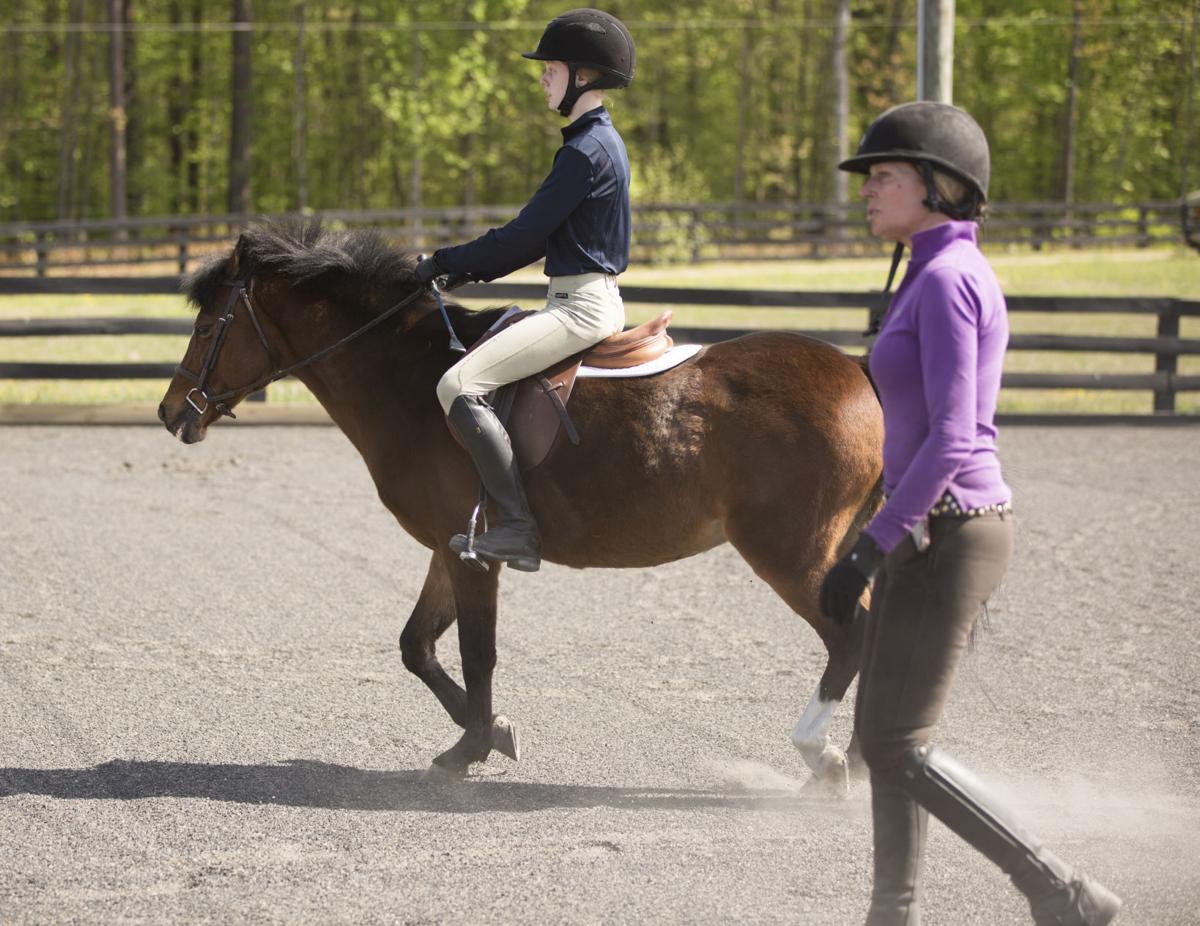 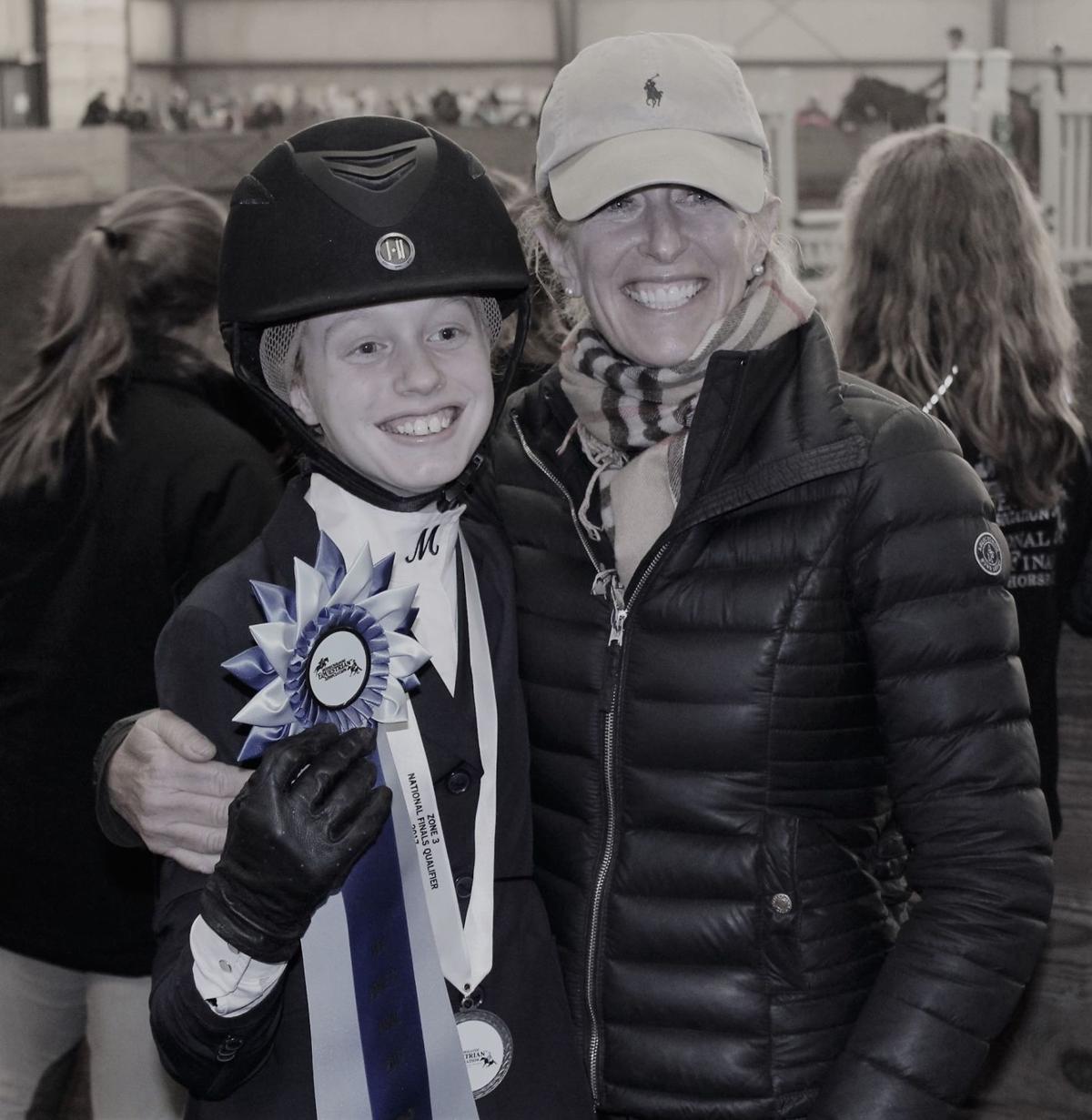 Meg and her coach, Carol Hawley, are ecstatic after Meg advances to the national championship.

As much as Meg Bonner loves horses—and they make her so happy she can’t quite put her feelings into words—she also has a paralyzing fear of them.

Even so, the 12-year-old hasn’t let her natural terror of half-ton animals keep her out of the show ring, the barn or even the saddle. She faced her fears head-on—and ended up winning regional and state championships in the process.

Today through Sunday, Meg will temper her biggest terror ever as she rides in the Interscholastic Equestrian Association National Finals in Lexington. She’ll draw a name from an envelope, get atop a horse she’s never seen before and immediately head to the show ring to be judged.

She’ll probably turn white as a sheet or feel like she’s holding her breath the whole time, as she’s done in past competitions. But those who’ve watched her say they feel like she’s already won a world championship, just by having the nerve to compete in the first place.

“This is such a triumph over a challenge,” said Carol Hawley, her coach and the trainer at Whitestone Farm in Spotsylvania County. “This is somebody really reaching down with grit. It’s like the whole region has been behind her and so many people have been in her corner because they know how much she loves it, and how hard she’s worked.”

A seventh-grader at Chancellor Middle School, Meg isn’t irrational or phobic about her fear of horses. She’s just naturally cautious and has been since she took her first breath.

“She’s a little suspicious of the whole world,” her mother, Kathleen, said.

Meg’s wariness is especially keen with thousand-pound horses that might get spooked if a dog barks or another rider gets too close—or even if the wind kicks up a certain way. She’s seen the damage they can do.

Meg has grown up in a barn. Her mother and Hawley are best friends who studied horses at the University of Mary Washington, then went on to give lessons in the area.

Meg’s mother became practically "an invalid" a few years ago when she broke her arm after being thrown by a horse, she said. Her coach also has seen the way flighty animals can buck and bite, race away in blind fear or stop short of a jum

Still, Meg wanted to ride. To be around horses. To brush them, take care of them and even clean up after them.

“There’s just something about them that makes me happy, but I don’t know what it is,” said Meg, who’s rather shy and soft-spoken with strangers.

‘YOU CAN HANDLE IT’

Meg started lessons at age 5, and she and her coach took things slowly.

When Meg got comfortable sitting atop her pony, Jasmine, as the two walked around the arena, she progressed to trotting. When she mastered that gait, she moved on to cantering.

Even when Meg was comfortable with the physical challenges of all three gaits, there were times she couldn’t handle the emotional part of the fastest one, cantering. So Hawley had Meg merely walk or trot her pony while others put their horses through their paces.

The coach worked slowly to build up Meg’s physical skills—and confidence—so that Meg would know what to do if a pony got a burr under its saddle while she was riding.

Hawley would tell her, yes, a horse could spook “but look how good and tight you’re getting” atop the animal. “You can handle it,” the coach would say.

The coach also praised Meg’s natural talent and said that the rider would become even stronger in her skills because she had overcome her weakness.

Meg became familiar with the horses at Whitestone so she could read their mood changes and behaviors, and know how to react. Instead of freezing, as some riders do when their horses act up, Meg knew how to handle the episode because it was what she feared most.

Then Hawley suggested another challenge, the equivalent of “throwing Meg into the deep end of the pool.”

Hawley suggested Meg join the IEA team and compete in regional shows. Meg loved the notion of traveling with others who share her passion, rooting them on in the ring and celebrating their victories at dinner afterwards. The only aspect that gave her the “deer-in-the-headlights” look was the riding itself.

The IEA competition provides a pool of horses for riders. Before an individual’s turn, the rider picks what’s called a sentence out of an envelope. On the slip of paper are brief descriptions of the horse, such as “bouncy” or “grumpy,” “easy to ride” or “hard.”

The notion of getting on a horse she’d never seen before—then being judged on how well she performed with it—went against every natural instinct Meg possessed.

For the whole first season, Meg watched others. She couldn’t bring herself to put her name on an entry form, and Hawley didn’t push her.

When her second season rolled around last fall, Meg started entering the meets. In her first ride, she drew the horse she wanted—she prefers the slow and steady ones—and Meg won both classes.

Her confidence, and point totals, continued to rise. She won a regional event in Middleburg, which qualified her to compete in the zone finals, against riders from Virginia, West Virginia, Delaware, North Carolina and Maryland.

When she won that event as well and qualified for the national finals, team and family members couldn’t believe the little girl who once had such a big fear had ridden on to a national stage.

“She’s only the second one on our team ever to make it,” said Koelber Hawley, Meg’s best friend and the trainer’s daughter. “It’s a huge accomplishment.”

But what Koelber respects most about her friend is that Meg always has a good attitude, no matter how nervous she may be about the horse she’s riding. If she messes up, she accepts responsibility for it and doesn’t hold it against the horse, its owner or anyone else around.

“She recognizes that how you act and how you treat your horse is more important than how you place,” said Koelber, 15.

This week during spring break, Meg practiced every day for nationals. She still hadn’t processed what it all means.

“If you had told me I was going to nationals at the end of this season,” she said quietly, “I would have thought you were making a really cruel joke.”

Koelber Hawley says best pal Meg (riding Jasmine, above) is ‘only the second one on our team ever to make it’ to the national stage. Take that, fears!

Meg Bonner leads Jasmine outside at Whitestone Farm in Spotsylvania. She worked with coach Carol Hawley to gradually conquer her fear of horses.

Meg and her coach, Carol Hawley, are ecstatic after Meg advances to the national championship.