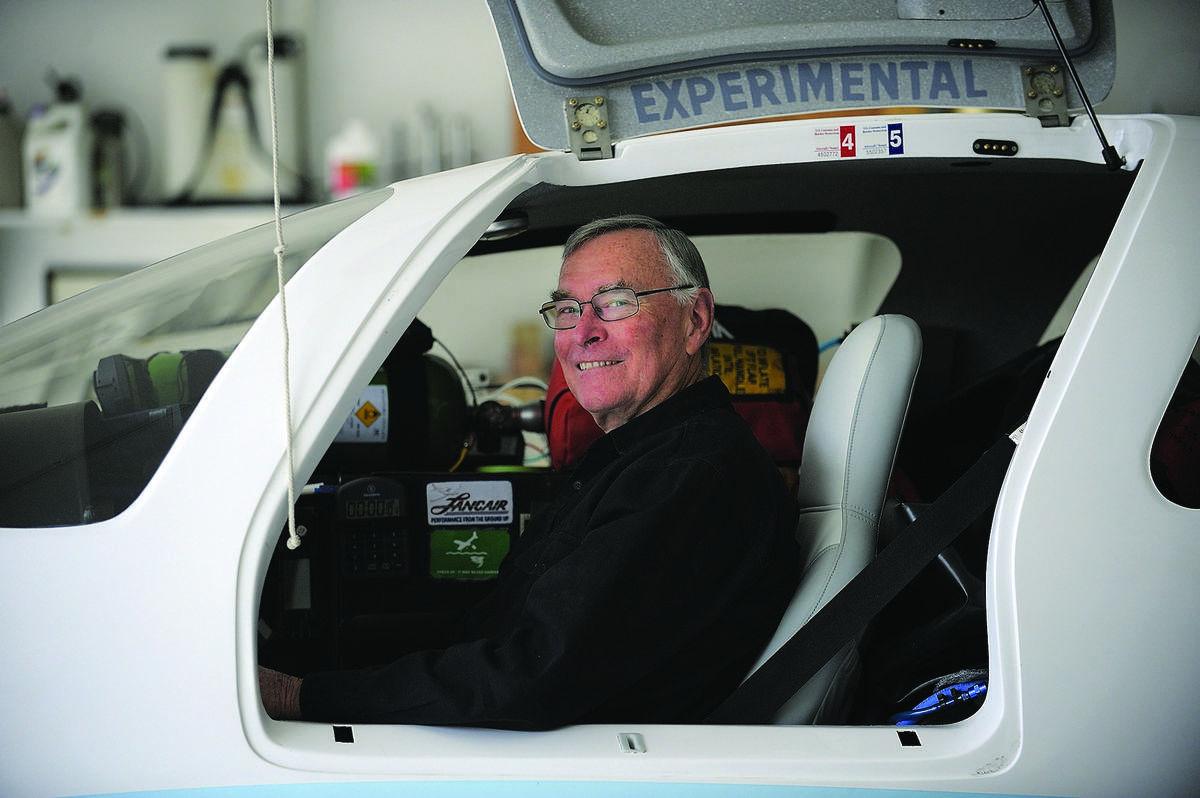 Bill Harrelson of Stafford completed a flight around both poles, a journey which he began in Kinston, N.C., on Dec. 28 while flying a Lancair IV airplane. His record-breaking bid is the result of more than 11 years of preparation. 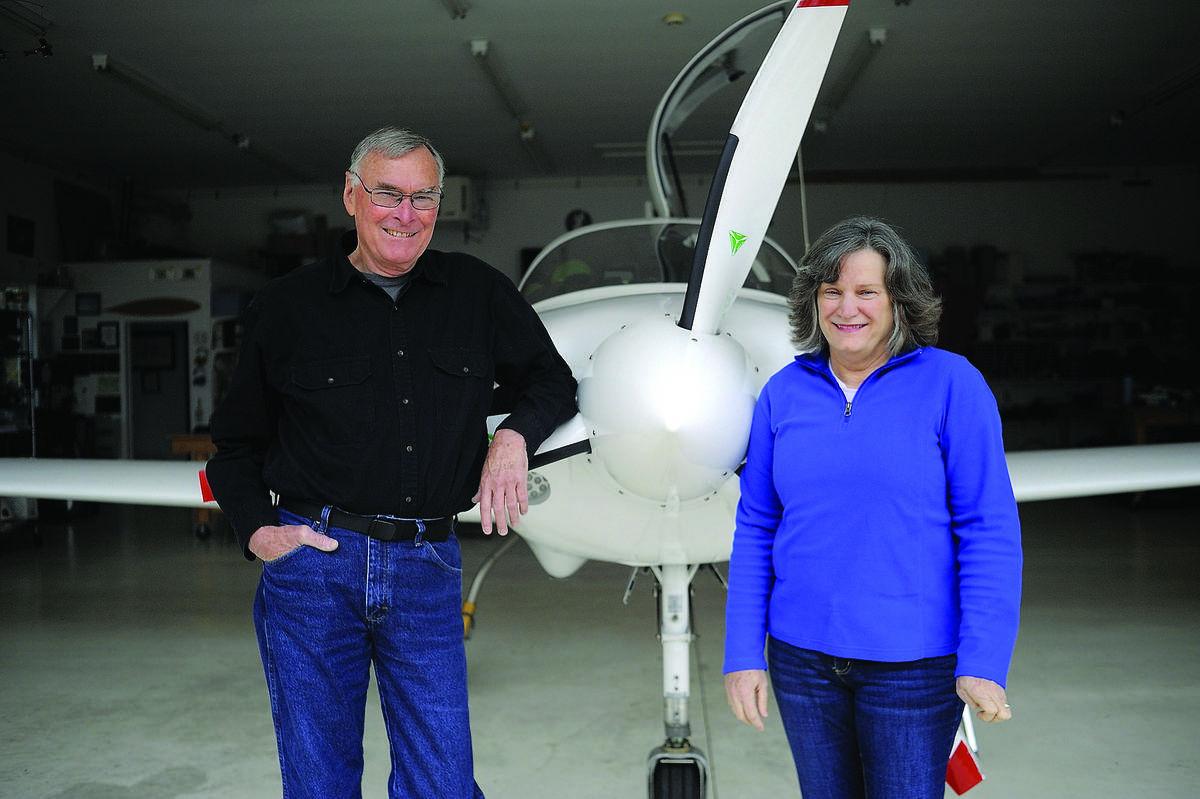 Bill Harrelson, 64, and his wife, Sue Harrelson, 60, who was an integral part of his ground team, built the plane that he flew in his record attempt. Both are retired airline pilots. 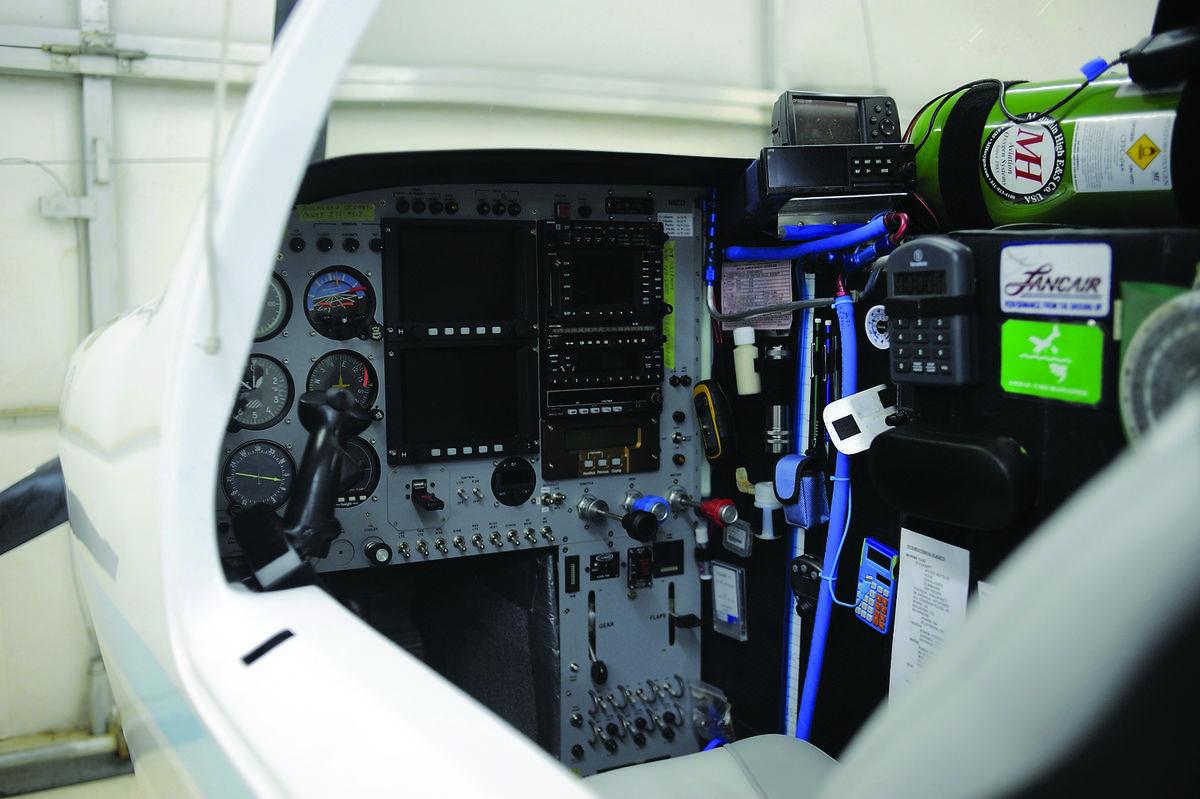 The inside of the single-engine airplane was equipped with gear for the long flights, leaving only room for one pilot.

BY PAUL SULLIVAN FOR THE FREE LANCE–STAR

Bill Harrelson relaxed at his home in Dogwood Airpark on Friday, talking about the enormity of the task he had just finished. His wife, Sue, who played an indispensable part in the effort, adds her comments. Both, obviously, are still recovering from the sheer exhaustion of it.

What Harrelson has done is set a new world record (provisional) for small, lightweight, single-engine airplanes circling the Earth, touching both the north and south poles along the way.

No news media were present when he glided to a landing Thursday afternoon at the Stafford County airstrip, welcomed by Sue and a handful of other admiring pilots.

But a home video shows the lanky Harrelson emerging from a cockpit crammed with extra fuel tanks, oxygen bottles, survival gear and electronics, kissing the pavement and embracing his wife.

The entirely private effort, with but minimal sponsorship from a few small companies, relied on hundreds of hours of volunteer work and more than 11 years of preparation. The Lancair IV aircraft, assembled from a kit, was built with this single series of flights in mind, Harrelson said.

The Harrelsons, both retired airline pilots, knew the record attempt would be hard, a major challenge, but they made it clear they had little idea just how great the challenge would turn out to be.

“There was only one ‘easy’ leg,” the 64-year-old pilot explained, in the 11 flights required to complete the circumnavigation, with Sue adding: “And that one wasn’t really easy.”

The precisely scheduled plan had called for Harrelson to fly to his starting point at Kinston, in eastern North Carolina, to begin his record attempt. He did that hop to Kinston and then, with favorable weather, refueled for what turned out to be the lengthiest single flight leg of all, just under 29 hours to Montevideo, Uruguay.

“The clock started running when I left Kinston,” explained Harrelson, “and stopped when I landed back there, 24 days, eight hours and 10 minutes later.”

The flight must still be certified by the sanctioning body known as the FAI (Fédération Aéronautique Internationale), based in Lausanne, Switzerland, in order to eclipse an old effort made over a period of nearly five months by a now-deceased aviator.

In a plane with no built-in oxygen system, no weather radar, no deicing equipment to shed ice from its flying surfaces and no turbocharger to lift it above storms or ice, Harrelson had only his own sharp skills, those of Sue and her support team of five experts back home, and an engine that would not quit.

When a flight’s support is not carried aboard, there must be a constant and reliable link with that ground-support effort. The team had learned a lot from a failed 2013 attempt at the record, which was defeated by severe weather over Antarctica.

“Nearly all our communication was texting using Skype,” said Sue.

As the Lancair slipped to a landing at Punta Arenas, in southern Chile, the surroundings were familiar, for this was the airport where he had spent much time in 2013 awaiting favorable weather to continue the flight across Antarctica and onward. But that weather didn’t improve, leaving Harrelson to call off that first attempt.

On Dec. 31, 2014, Harrelson once again challenged Antarctica, heading south over Tierra del Fuego and the Drake Passage and what mariners have long known as probably the worst consistently bad weather anywhere.

Hours into the flight, heading toward the South Pole, visibility was at least clear and he had burned off enough of the Lancair’s heavy fuel load to climb to some 12,000 feet. But flying over the unending expanse of white in the perpetual light of summer is deceiving, for the continent itself rises beneath the plane. At the pole, the Harrelsons explained, Antarctica is about 9,600 feet—nearly 2 miles—above sea level.

Despite a problem with the airplane’s autopilot, he was able to reach the pole and circle it. But headwinds were increasing, cutting the Lancair’s forward speed and causing it to burn more fuel, leaving too little to reach his destination.

Faced with a key decision, Harrelson knew he had little choice but to turn around and head back, once again, to Punta Arenas. The difference this time was that he had reached the pole and would not have to go there again.

A major hurdle had been cleared. For rules of his record attempt require only that the pilot cross the poles before continuing onward.

Back in Punta Arenas, Harrelson was able to improvise a fix for his autopilot, but could only wait for improved weather.

At last, after a week among what he said were some of the friendliest and most helpful folks anywhere on his route, the little airplane, once more burdened with a heavy fuel load, took to the air bound for Tahiti in French Polynesia.

The outward flight through the treacherous mountains of southern Chile with loads hindering the plane’s performance made for nasty conditions—icing, winds and none of the ability that larger aircraft have to simply climb out of it.

“It was ugly,” Harrelson said of the first part of the long leg.

Some 25 hours later, the Lancair might as well have been on a different planet as it touched down in tropical Papeete in Tahiti.

From Tahiti, Harrelson had to backtrack to Hamilton, New Zealand, a stop declared in advance which could not be skipped.

In Hamilton, the Lancair was serviced and its nine fuel tanks nearly filled for the next leg, a long flight to Honolulu. The Hawaiian leg went off smoothly, and after a short stay for weather, the pilot elected to fly to the American mainland, landing at San Luis Obispo, Calif., to wait for improved weather before going to Alaska.

From southern California, he then flew one long leg to Fairbanks, Alaska, once again traveling from a warm to a frigid climate.

If the weather was inhospitable, the people in Fairbanks were not. There, with his plane in a hangar, he met Art Mortvedte, a polar flyer who calls himself the “Polar Pumpkin” and flies an orange Cessna 182. “I had first met Art at Oshkosh,” Harrelson said, referring to the yearly air extravaganza in Wisconsin.

It would have been too easy to get into serious trouble on the final leg, a whopping 5,520-mile single hop from Fairbanks, over the North Pole, then straight south across Canada, down into the States to a landing at Kinston and journey’s end.

But all manner of treachery lay ahead, with the Arctic cloaked in 24 hours of darkness every day at this time of year, nasty weather everywhere, no place to land in case of an emergency and just about every danger imaginable to the pilot of a small plane.

Even in the Canadian north, said Sue Harrelson, where there are scattered emergency landing strips, they are useless at this time of year, when they are shuttered in darkness, isolated and unmanned. In other words—everything had to go perfectly.

On Jan. 20, Harrelson made the decision to take off into the gloom northbound into the dark of the north polar region.

As he left Fairbanks climbing and following his GPS pointers toward the pole, Harrelson said he could make out a whitish glow from arctic ice below.

And then even the glow disappeared. Only his instruments, the drone of his engine and the 4-degree cockpit temperature told him that he was not sitting in a chair or in a closet. And when even the engine began to run on cold (76-degree Fahrenheit) oil, the pilot knew anything could happen.

At that point, he was totally committed: The only way out was home.

At the pole, or where his GPS units said the pole was, the directional indicators went crazy, pointing all over the place, he said, but the vital information was there: accurate position information.

When you’re at 90 degrees north latitude and all the longitude lines converge, you’re at the right place. All routes lead south. The pickle is to choose the right one.

He landed there Jan. 20, after taking off from Fairbanks 25 hours and 33 minutes earlier.

Paul Sullivan of Spotsylvania County, a former reporter with The Free Lance–Star, is a freelance writer. Email him at PBSullivan2@cs.com.

When my doctor told me my blood pressure and cholesterol are too high, I jokingly told him, “That’s a problem, because my three favorite food …

Stately 5,500 square-foot downtown residence with all the modern luxuries

Take a step inside 1105 Princess Anne St. in downtown Fredericksburg and you can experience all the glory that a million-dollar restoration brings.

The hard seltzer craze has come to an end

The once unstoppable growth of hard seltzer has gone flat.

Junior Emma Shropshire and senior Emily Broyles of Courtland High School Future Farmers of America have earned their state degree, the highest award a state can bestow on a student.

The Woman’s Club of Fredericksburg has awarded a scholarship to Kyla Bayton, a graduate of James Monroe High School.

Bill Reed and his wife noticed this strange offshoot growing out of a shrub in their front yard.

SUNRISE, SUNSET>> Sometimes the show is behind you

Anne Hupka of Stafford County recently captured a photo of anticrepuscular rays from her family's home on the Potomac Creek.

Four Stafford High School drafting students volunteered their skills to draw the house plans for a Habitat For Humanity home in Caroline County.

Saying Grace: The real prize is greater than a crown

After competing in pageants for nearly 20 years, I decided it was time to hang up my proverbial high heels. And while I gained many benefits t…

Fredericksburg shop plans events on July 30 to bring more awareness to the issue.

Bill Harrelson of Stafford completed a flight around both poles, a journey which he began in Kinston, N.C., on Dec. 28 while flying a Lancair IV airplane. His record-breaking bid is the result of more than 11 years of preparation.

Bill Harrelson, 64, and his wife, Sue Harrelson, 60, who was an integral part of his ground team, built the plane that he flew in his record attempt. Both are retired airline pilots.

The inside of the single-engine airplane was equipped with gear for the long flights, leaving only room for one pilot.