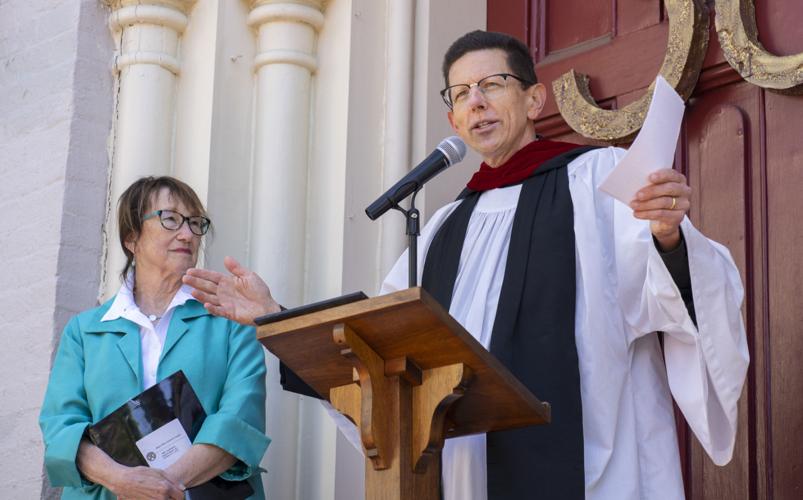 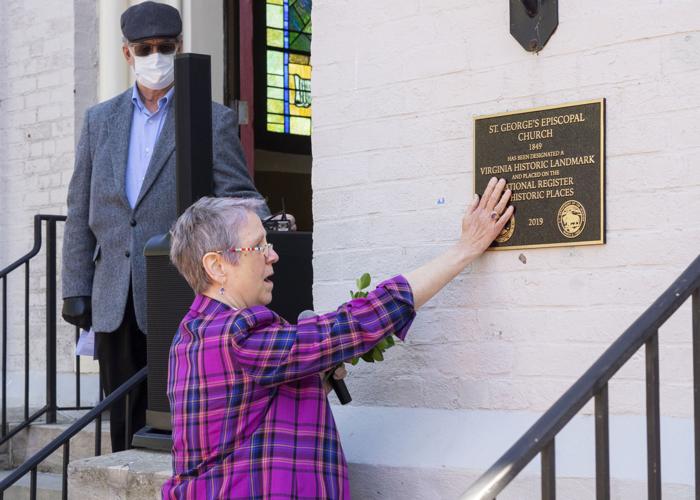 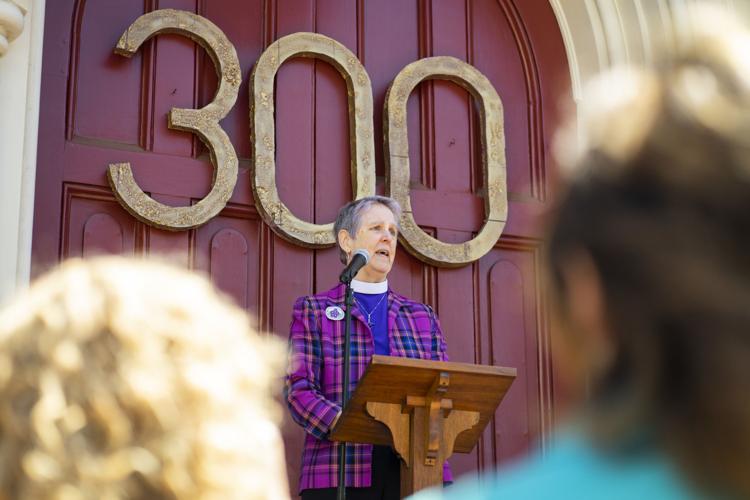 Rt. Reverend Susan Goff, Bishop Suffragan and Ecclesiastical Authority of the Episcopal Diocese of Virginia, says a few words before her blessing of the plaque. 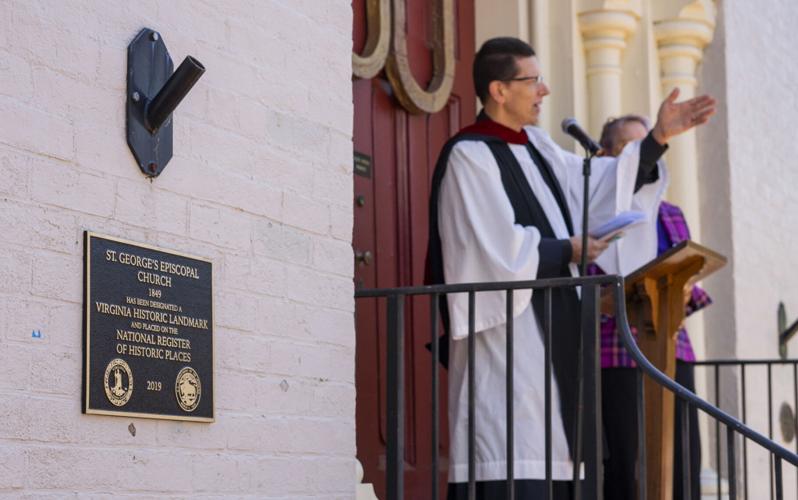 Rev. Joe Henley speaks during a dedication ceremony on Saturday.

BY The Rev. Deacon Ed Jones

The presiding bishop of the Episcopal Church brought a message of love, hope and resilience to the 300th anniversary celebrations of St. George’s Church in Fredericksburg this weekend.

In a live virtual appearance Friday night and in a prerecorded sermon to be delivered Sunday morning, the Most Rev. Michael Curry said too often symbols of Christianity have been associated with bigotry and intolerance. “Maybe our core mission of evangelism is to evangelize Christianity itself—to put Christ back into Christianity,” he said in remarks prepared for the Sunday service. He told St. Georgians that in their fourth century of existence, “your great task ahead will be to bear witness to a way of being Christian that actually looks something like Jesus.”

Expanding on the theme of “love as a transforming force in the world,” which was the focus of the sermon he gave during the royal wedding of Prince Harry and Meghan Markle in 2018, Curry proclaimed that even in the midst of a pandemic and an insurrection at the U.S. Capitol, “the soul of Christianity” is captured by the verse, “God is love.”

In the busiest weekend so far in the monthslong celebration by St. George’s of its 300th anniversary, the church also hosted a Saturday morning commemoration of the day the law creating the region known as St. George’s Parish took effect—May 1, 1721. The Saturday event included a proclamation read by Fredericksburg Mayor Mary Katherine Greenlaw and a blessing by the top bishop in the Diocese of Virginia, the Rt. Rev. Susan E. Goff.

The Rev. Joe Hensley, the rector of the church, announced at Saturday’s ceremony that the St. George’s Landmark Building Fund has been established through the Community Foundation. He said the parish hopes that the fund “will one day endow the ongoing maintenance and care of this beloved icon of the city skyline. We have a goal of reaching $300,000 before the end of our 300th anniversary in November, and are planning an art show and gala at Belmont,” the Gari Melchers gallery and studio in Falmouth. The church has recently been added to the National Registry of Historic Places.

Hensley praised St. George’s legacy of faithful service to the community. He also referenced the displacement of indigenous peoples caused by the creation of the parish, as well as the church’s connections to slavery. “We acknowledge that sinful legacy, and the blood, sweat and tears of enslaved people in the place known as St. George’s Parish,” said Hensley. “We celebrate the resilience and contributions of these ancestors also, and remember and pay respect to their descendants. We commit to continue working with all our neighbors and relatives towards justice and healing, equity, liberation and community on this land which God has made.”

St. George’s decadeslong focus on issues of racial justice resonated with Bishop Curry, the first African American head of the Episcopal Church. Curry said recently, in the wake of the conviction of Derek Chauvin for the murder of George Floyd, that the nation has experienced “a moment of hope in the long walk” to justice.

During the Friday night forum, Curry was questioned about what he has referred to as “partisan segregation.” Curry called on church members to help break through the barriers that have created “communities of like-mindedness” that don’t interact with each other. “We’ve not been quite this polarized since the Civil War,” he said. “We’ve got to break through on the level of person-to-person relationships.”

Referring to the racial segregation that was still in force during his youth, Curry said that “I lived with people who could have chosen bitterness. They could have turned inward and destructive, and they didn’t. ... I was raised to believe that we were really put here to change the world for the better. ... Dr. [Martin Luther] King was right when he said love is the most durable force in the universe.”

This week my family marked the two-year anniversary of the passing our of matriarch, my beloved grandmother, Dolores Miller. I have been think…

Word on the Street: Meet others in the waters, even if we get soaking wet

In the summer of 2017, a speaker at a National Alliance to End Homelessness Conference presented a video on how systemic responses could make …

I have been reading a biography of George Müller to my children as part of our homeschool lessons. George Müller, born in 1805 in Germany, is …

Should married couples file taxes separately to get a lower student loan payment?

Should married couples file taxes separately to get a lower student loan payment?

Rt. Reverend Susan Goff, Bishop Suffragan and Ecclesiastical Authority of the Episcopal Diocese of Virginia, says a few words before her blessing of the plaque.

Rev. Joe Henley speaks during a dedication ceremony on Saturday.