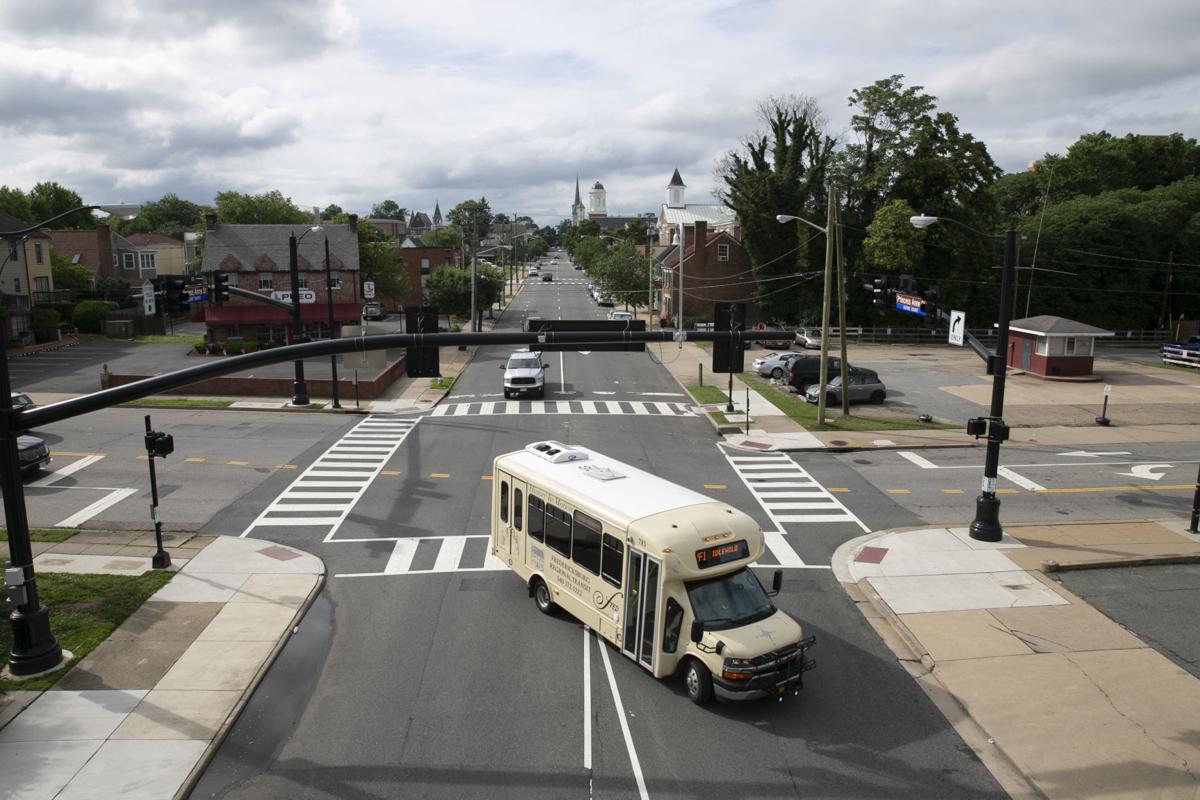 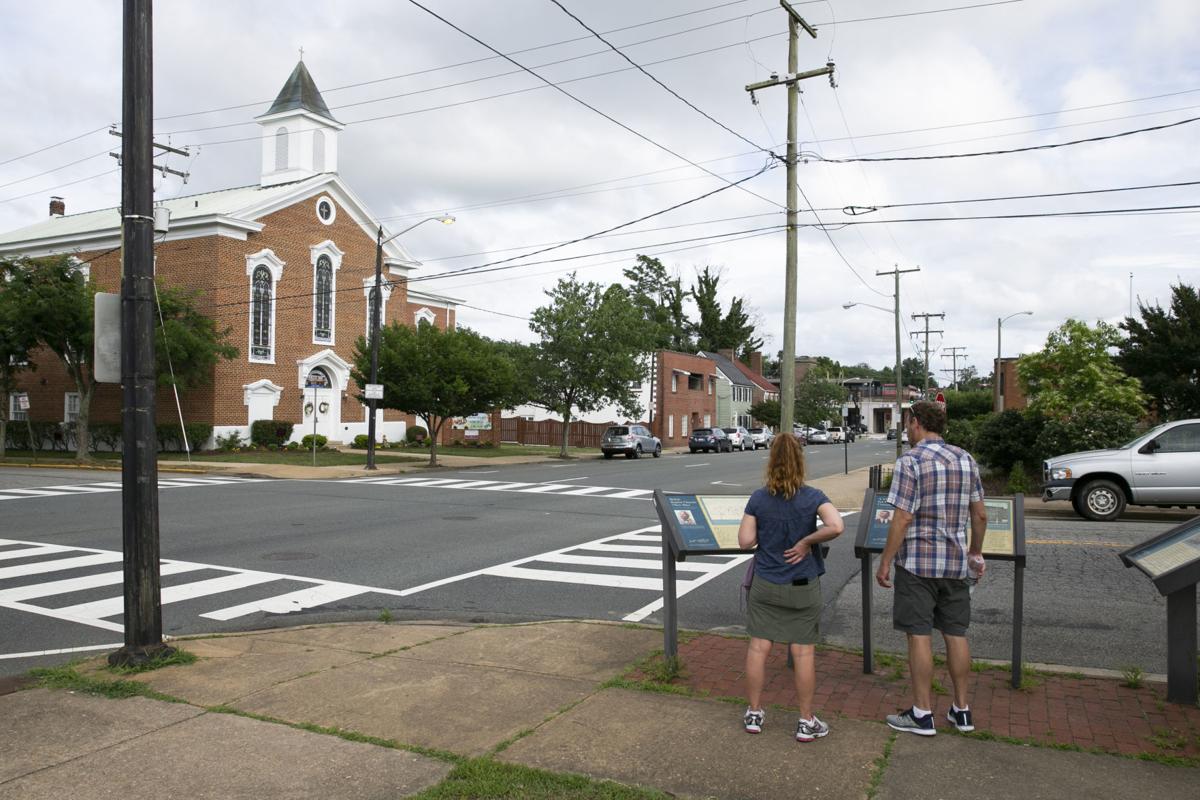 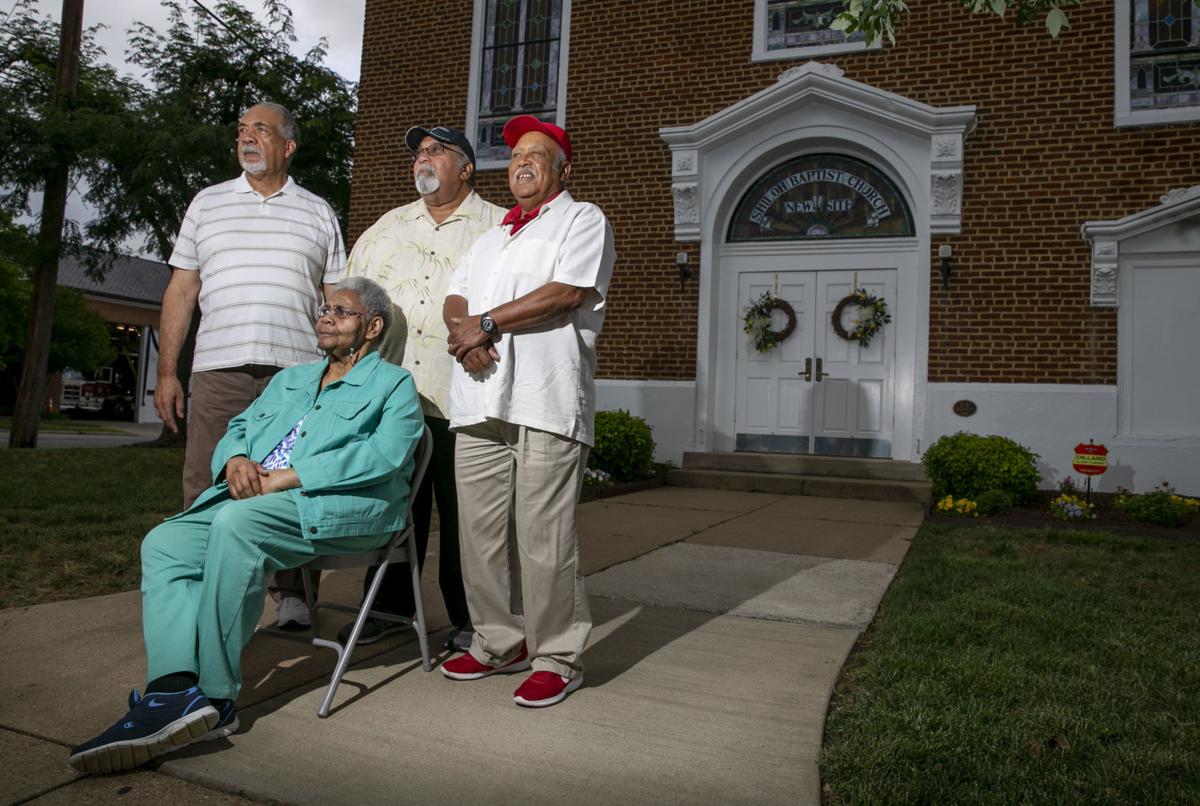 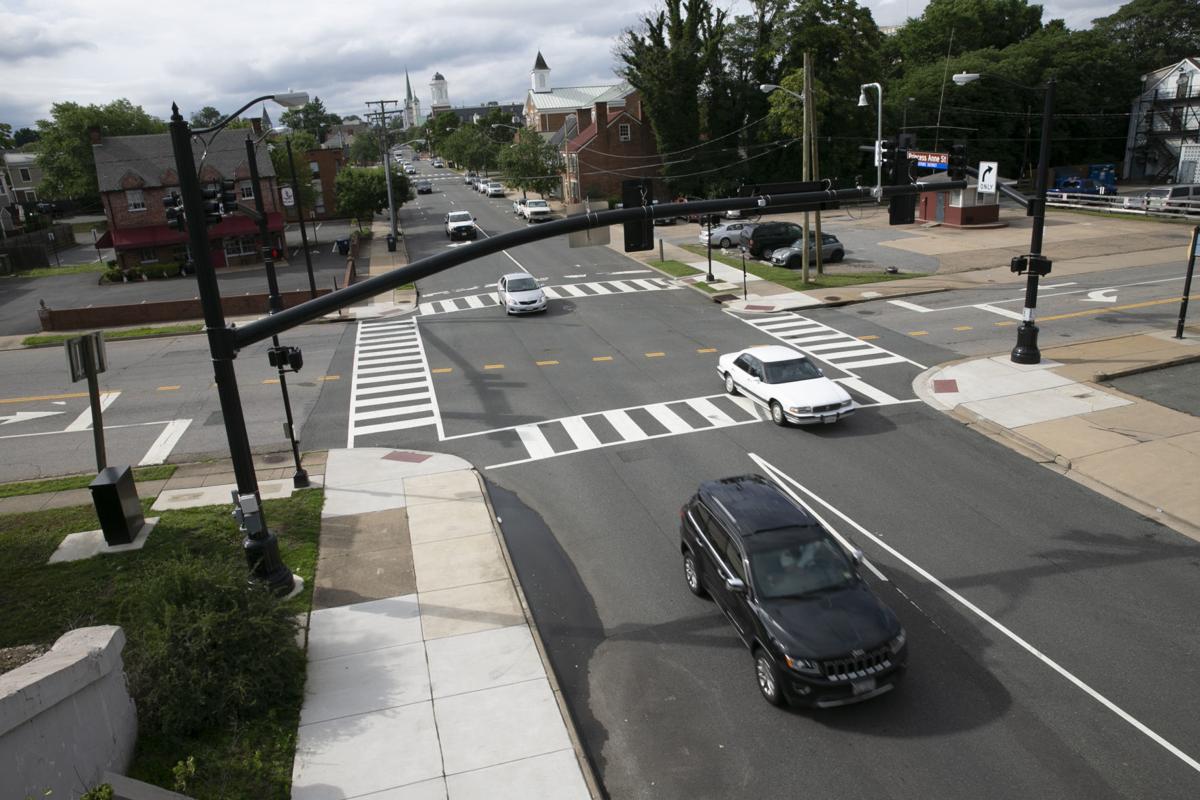 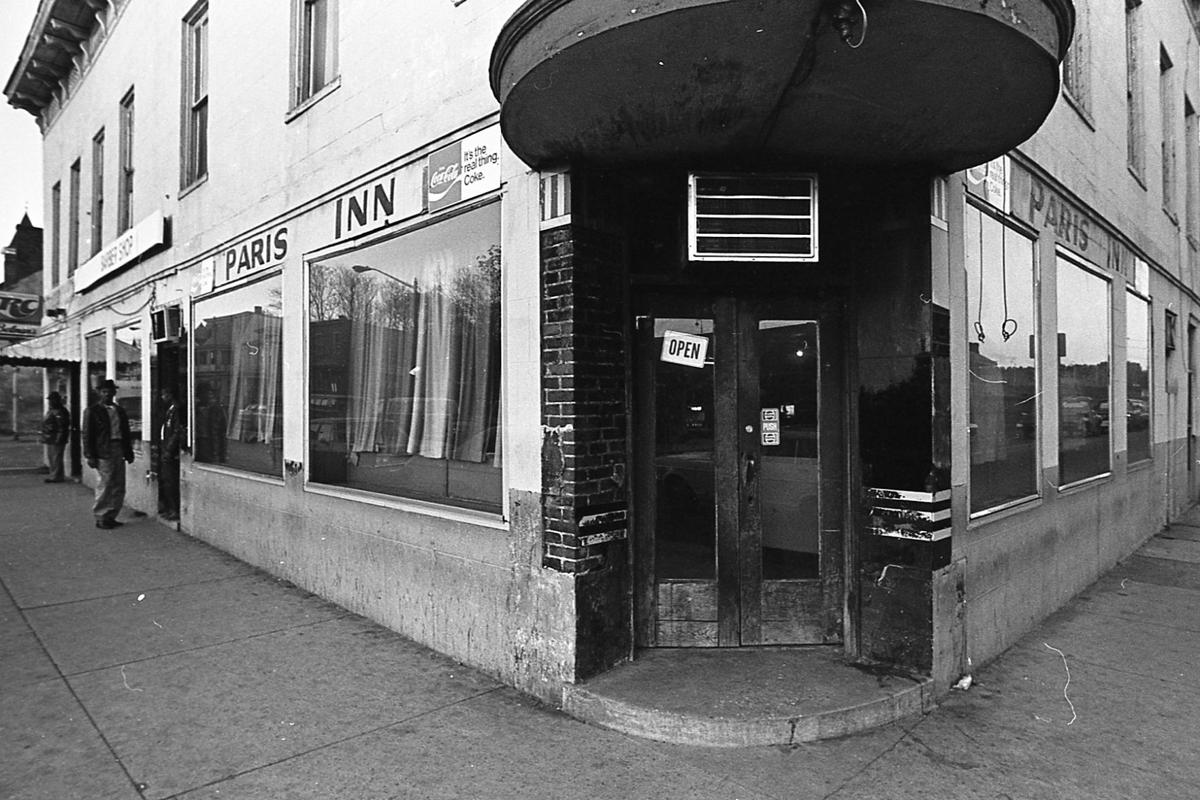 The building housing Paris Inn is pictured in December 1975. 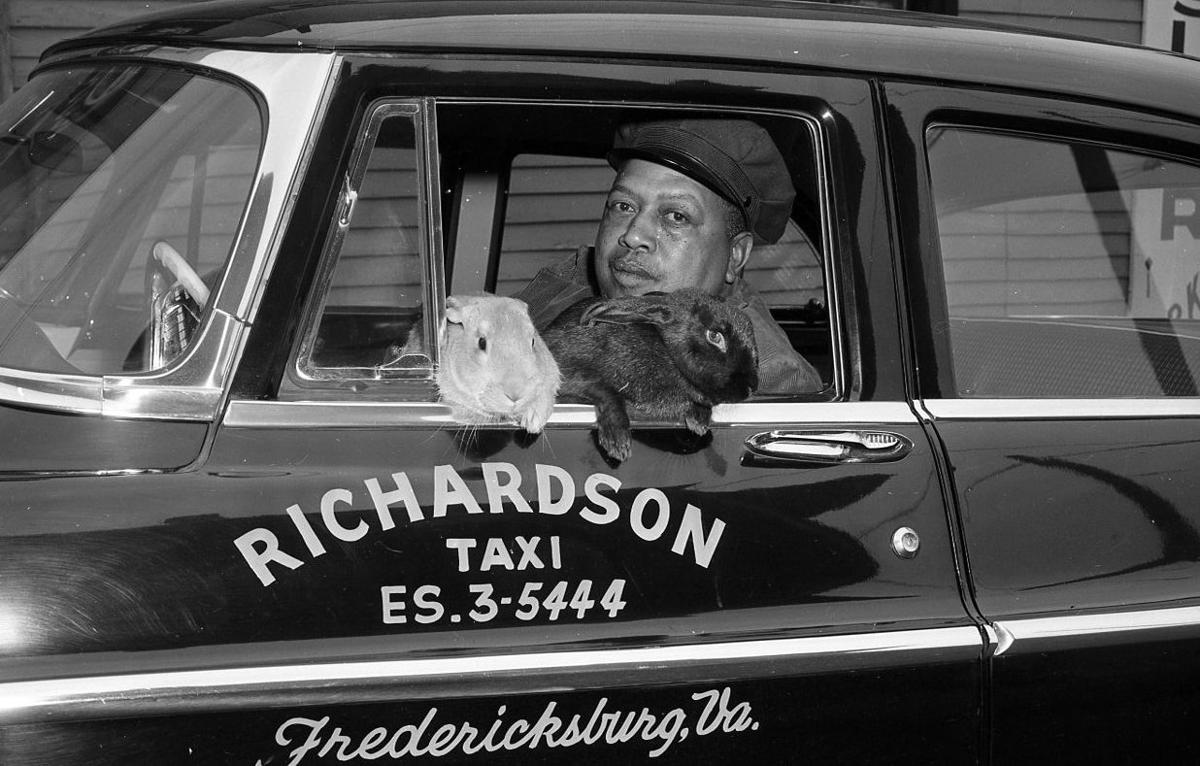 In this 1950s file photo, ‘Socks’ Richardson poses with rabbits that he found, inexplicably, in his taxi. The rabbits were unharmed, and returned to their owner. 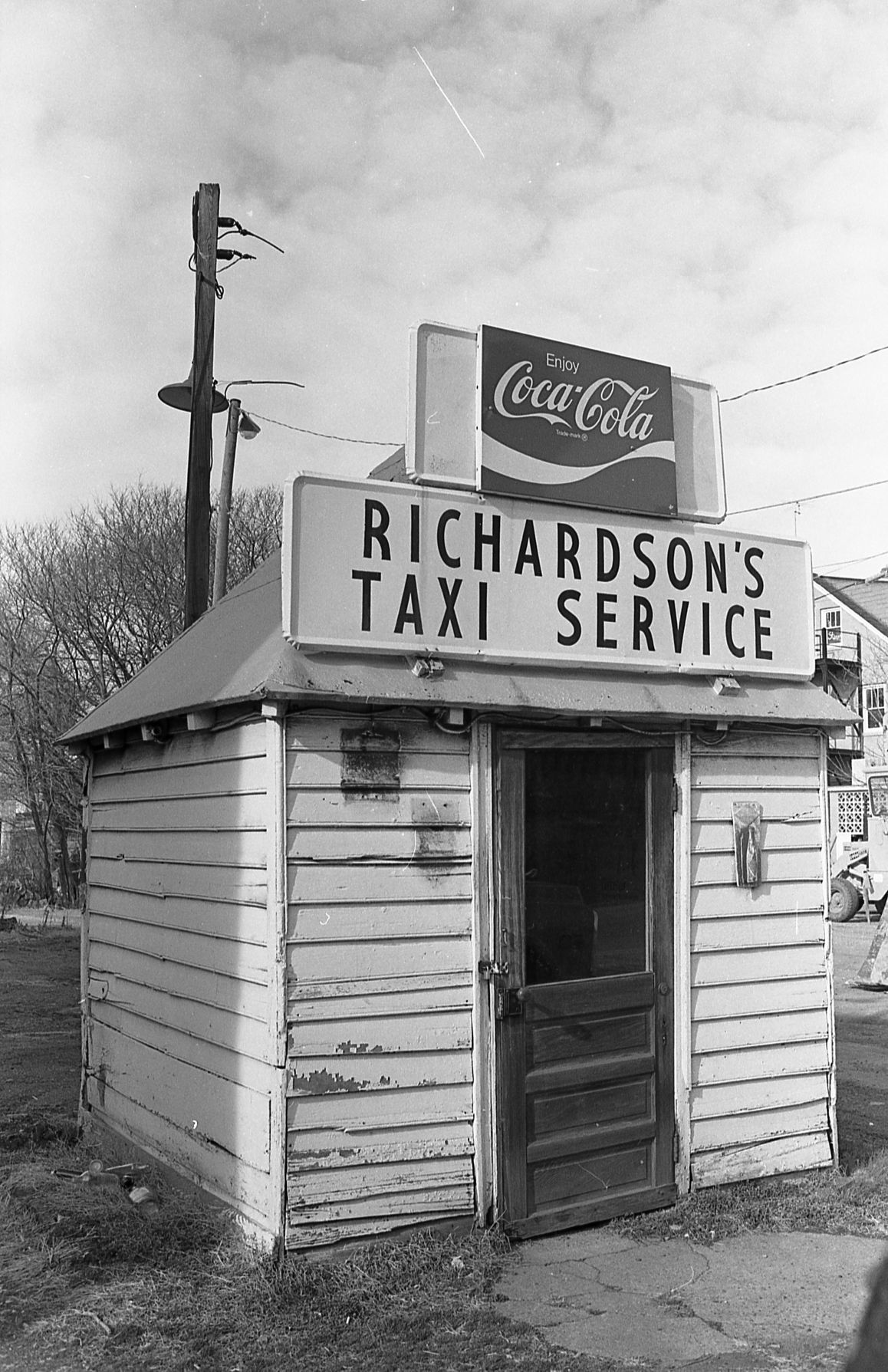 The historic structure that once housed Richardson's Taxi Service is shown in 1976, before its relocation. 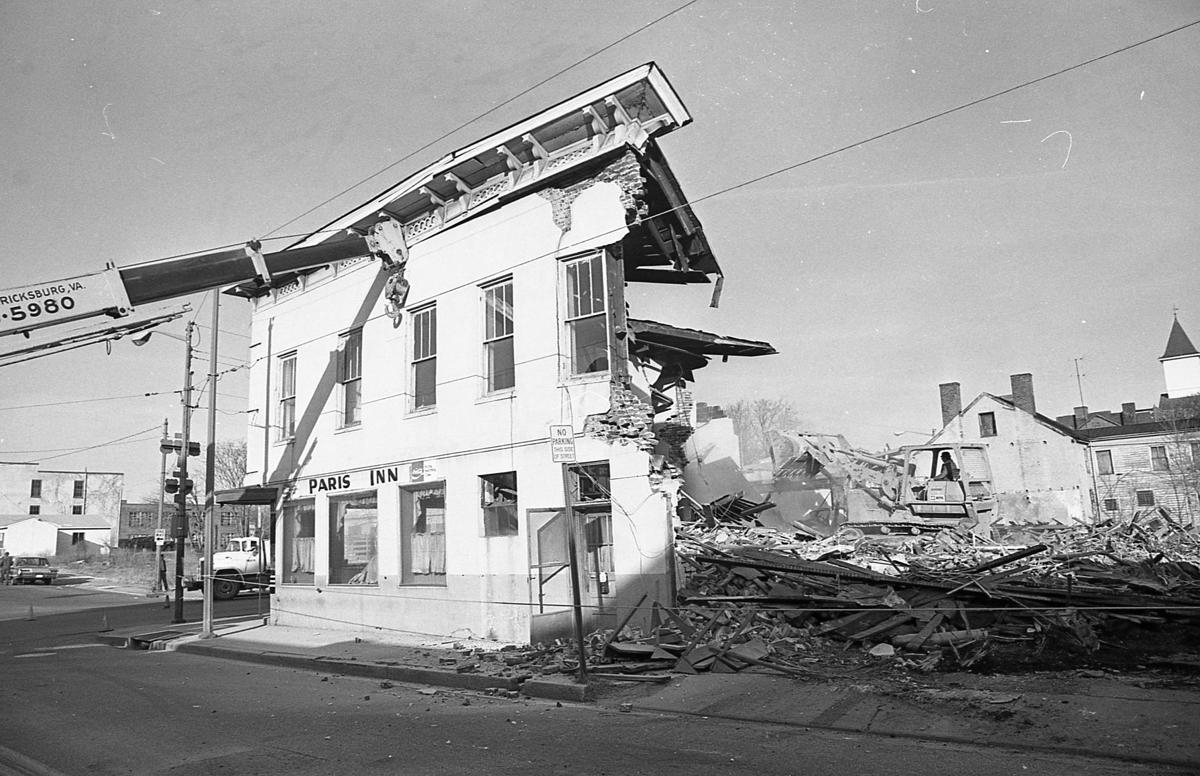 The building that housed the Paris Inn is demolished in 1976.

By WENDY MIGDAL FOR THE FREE LANCE–STAR

Heading toward the railroad tracks on Princess Anne Street today, you see an odd assortment of buildings. The 600 block evokes a style you might call municipal bland, while the 500 block consists of orphaned historic structures flanking parking lots. But the randomness belies the storied past of the downtown Fredericksburg street. Not only was Princess Anne a main artery for travelers up and down the East Coast, these two blocks were once the center of a thriving African–American business district.

Shiloh Baptist (New Site) and Mount Zion Baptist churches remain strongholds of the neighborhood, and their parishioners have many fond memories of growing up there.

Gloria Johnson, who attends Mount Zion and was born in 1935, remembers visiting her grandmother’s house in the 300 block of Wolfe Street.

“My grandmother carried the flag across the street from Shiloh to Mount Zion when the new church began. People called it Sixth Street then, and it was just a muddy road,” she said.

Her family’s house was rented from Dr. Webster Harris, who owned quite a few properties in Fredericksburg, including the McGuire Hotel at 521 Princess Anne St.

“Dr. Harris used to employ young men from Virginia State every summer to help them with their tuition. The students would stay at the hotel and work on building properties in Mayfield. There was often a pile of bricks in front of the hotel that he’d collected from old buildings they were tearing down in the city. The college students would clean them up and reuse them. He was recycling before recycling was a thing,” she said.

In fact, Johnson herself won a scholarship from Dr. Harris—who awarded one each year to a Walker–Grant High School graduate—to Virginia State University, but was unable to attend college because her father had cancer and she was needed at home to help care for her younger siblings.

“It was heartbreaking,” she said, “but that’s just how it was in those days.”

Johnson’s father had attended the Fredericksburg Colored School, which occupied the spot on the corner of Wolfe and Princess Anne, where the fire station is now. Johnson herself attended Walker–Grant school, which opened in 1935. She remembers having graduation ceremonies in churches, because blacks were not allowed to use the community center.

“The students picketed in protest in 1949,” she said. “I remember that because it was the year my brother graduated.”

Across the street from the McGuire was the Rappahannock Hotel, the other of Fredericksburg’s two “Green Book” hotels for African Americans. Both hotels had several businesses on their ground levels.

“There was no bus service in those days, so people who worked in Fredericksburg and lived out in the counties used to wait on the porch of the Rappahannock Hotel after work for their ride home,” Johnson said. She went there because “they had the biggest dip of ice cream for a nickel.”

Frank Hawthorne, Joseph “Joe Fred” Brown and Doug “Sox” Richardson all said that back then you weren’t allowed out on the street after dark.

The three men grew up attending Shiloh Baptist (New Site), where they all still worship today, and were members of the class of 1964. Church attendance was not optional then, said the three men. It was a requirement.

The reason for the parental-imposed curfew was the infamous Paris Inn on the northeastern corner of Princess Anne and Lafayette, which was torn down in 1976. It was called a “beer garden,” though today it would be known as a bar.

“We used to sit on that brick wall across the street as kids on Friday night, and wait to see a fight,” said Hawthorne from the sound room at the church, where he serves as sound and video technician. “You could count on something happening. In those days, there were a lot of Marines that would come down from Quantico, and soldiers up from Fort A.P. Hill, and they came to the Paris Inn because they didn’t have any other place they were allowed to go. There were also entertainers on their way through from Washington to Richmond. So they’d drink some and get into a fight.”

Also on that side of the street were Maurice Tate’s drugstore, Brown’s Funeral Home, a shoe-shine stand, a newsstand and several barbershops and homes. Hawthorne remembers “the bushy-haired barber,” as the children called him, who “had hair like Don King. He used to keep a pot of beans on the stove, and if you were hungry, he’d ladle some into a mug and give you half a hoecake.”

Brown, his cousin Carole Hamm, and Richardson were all members of entrepreneurial families in town. Brown and Hamm’s grandfather, Arthur, started Brown’s Funeral Home in the family’s Rappahannock Hotel in 1918. It later moved into a building next door and then across the street to a new building in the 1950s.

“My grandfather saved his money and paid cash for that building,” said Brown. “It was hard to get a loan as a black in those days.”

Hamm’s mother, Mildred Brown Queen, ran the funeral home after her father’s death. (Her name is on Fredericksburg’s Wall of Honor for her work with the civil rights movement.) The funeral home was later bought by A.L. Bennett, and is still in business off U.S. 1.

Sox Richardson’s father owned one of several African American taxi businesses in town. Richardson’s was located in a little wooden building on Lafayette, next to the Paris Inn.

“They always said that building had been used by [Union Gen. Ambrose] Burnside in the Civil War. It was farther down Lafayette at the time,” said Richardson, who serves as a deacon at Shiloh. “Then one day, the historical society came and dated the building to that time period. After my father sold the business, they moved the building behind The Chimneys.”

Richardson’s brothers drove cabs for his father, “but not me,” he said with a laugh.

Richardson used to watch everything that was going on near the Paris Inn from his home a couple blocks down the street.

“I used to stay out sometimes when I wasn’t supposed to,” he said, “and one time a policeman stopped me and said, ‘Get in the car. Sox Richardson wouldn’t let his boy be out on the streets after dark.’ And he took me home.”

Behind the brick wall where the boys waited for something interesting to happen was a walk-up hot dog stand called The Foxhole.

Marvin Thornton’s service station occupied the building that is home to Nest Realty, and Philip Wyatt’s dentistry office was at 610 Princess Anne, now the site of the post office. (Wyatt was also a civil rights leader, and the building was moved to Charlotte Street in 1977.)

Much of the 600 block was occupied by Beck’s car dealership on one side of the street and Blanton–Massey’s on the other.

“But it depends on what time you’re talking about, as far as what business was there,” said Hamm. “I grew up in a house next to the Rappahannock Hotel. Then our funeral home moved into that building, until it was hit by a truck one day. Then it became an insurance company, a record shop and a rooming house.”

Many of the structures along these two blocks were torn down as part of a federal block grant program for downtown renewal in the early 1980s. But the churches remain.

Built in the late 1800s and early 1900s, they were among the earliest African American facilities in that area, and they, along with Shiloh (Old Site), are still stalwarts of the black community.

Pandemic stress is here to stay

Americans spend too much time doing admin tasks they hate

Americans spend too much time doing admin tasks they hate

Ways to reduce anxiety during pregnancy

Ways to reduce anxiety during pregnancy

North Stafford High School senior Alexandra Cannon organized a small prom for her classmates at her home. Cannon is the president of NSHS Interact club, and the price of admission was canned goods that could be donated to SERVE.

6-bedroom stately colonial on 12-plus acres in Spotsylvania listed at $799,900

A spacious estate with a rural vibe yet with seamless access to so much in our dynamic region?

What do our current temperatures and the local real estate market have in common? They are absolutely sizzling and are forecasted to stay hot …

The Woman’s Club of Fredericksburg has selected Meghann Cotter, executive servant-leader of Micah Ecumenical Ministries, to receive the club’s 2021 President’s Award for Woman of the Year.

Living with Children: Follow these 4 steps to give argumentative teenager the last word (and restore sanity)

"My 15-year-old daughter is slowly driving me insane! She argues with me about everything and always wants the last word. ... Is there a solution?"

These students have earned high academic honors and a place on the director’s list honor roll for the second semester of 2020–2021 at Chesapeake Bay Governor’s School for Marine and Environmental Science.

Cub Scouts of Pack 142 celebrated their rank advancement at an annual ceremony on May 27 at the Izaak Walton League of America’s Alexandria Chapter in Stafford.

Saying Grace: Worship together, not separately, as a family

Among the many things the pandemic changed was the way we gathered for corporate worship. Our once chaotic Sunday mornings became relaxing and…

The building housing Paris Inn is pictured in December 1975.

In this 1950s file photo, ‘Socks’ Richardson poses with rabbits that he found, inexplicably, in his taxi. The rabbits were unharmed, and returned to their owner.

The historic structure that once housed Richardson's Taxi Service is shown in 1976, before its relocation.

The building that housed the Paris Inn is demolished in 1976.