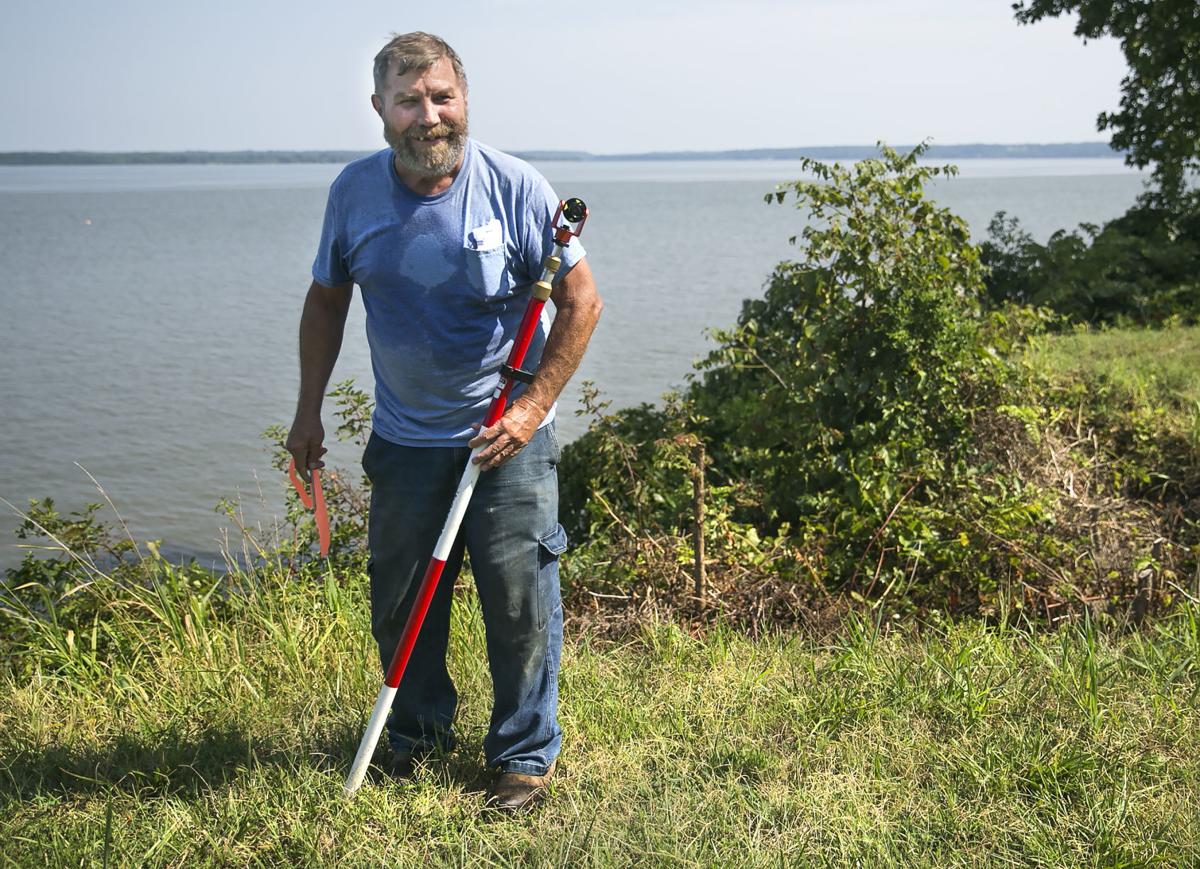 Land surveyor Jim Thurber stays positive, and has kept working, after being diagnosed with a rare eye cancer that spread to his liver. He believes 'cancer killers' are just around the corner. 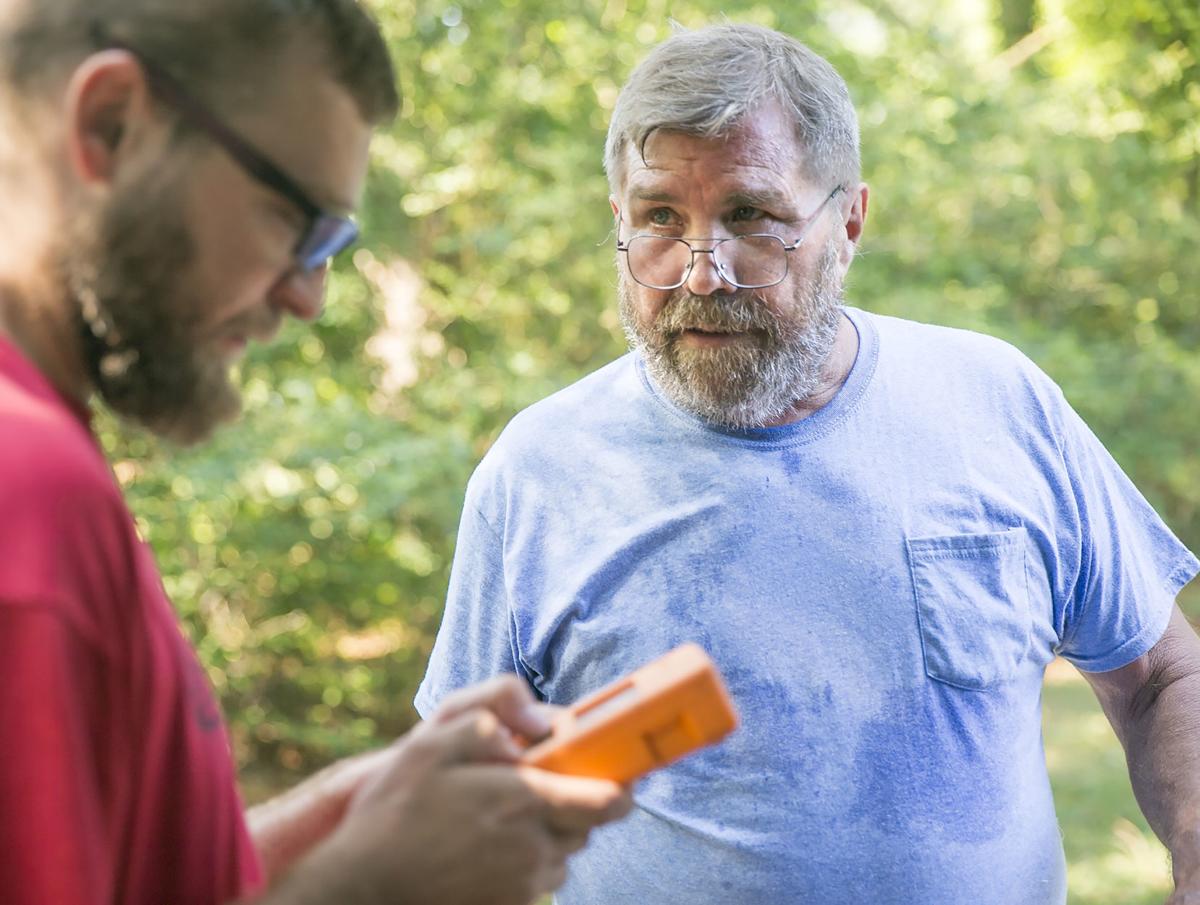 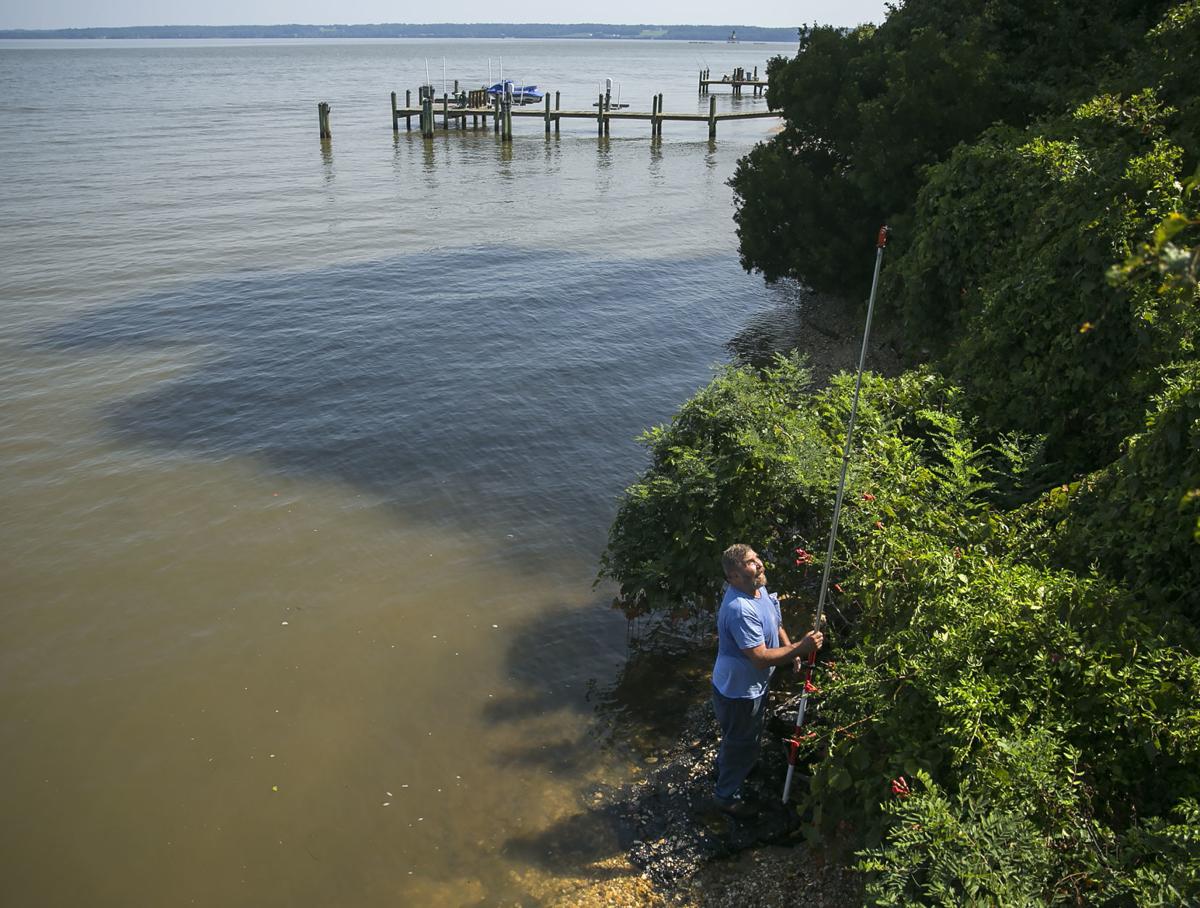 Thurber lost most of the vision in his right eye as a result of a tumor and has to be careful outside because his depth perception 'is somewhat flawed.' 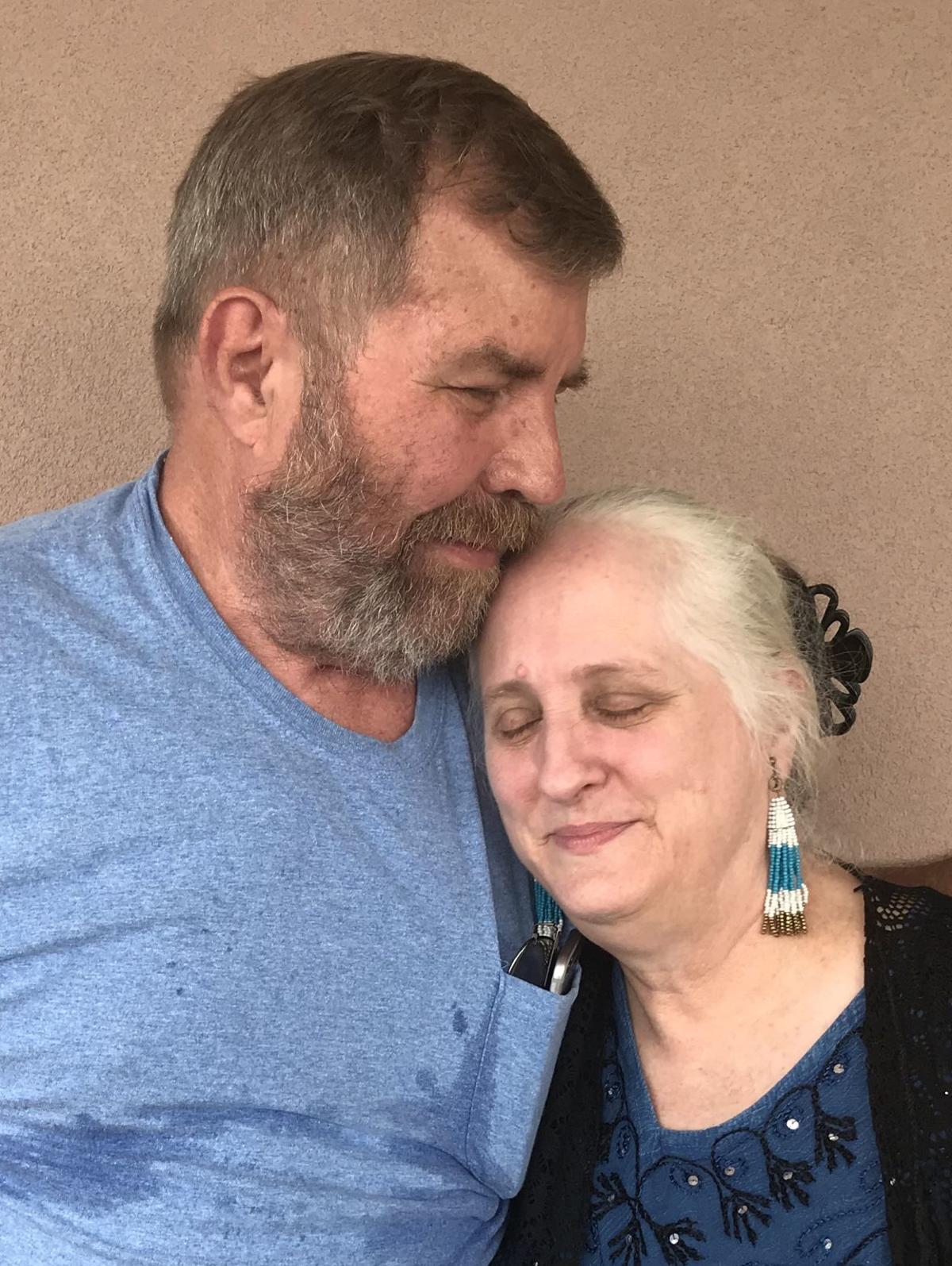 Jim Thurber is grateful that his wife, Liz, a civil engineer in Arlington, can take off as needed to go with him on monthly trips to Philadelphia for treatments.

Jim Thurber has always been optimistic, but his outlook on life has become even more positive since getting a diagnosis that some would consider a death sentence.

The Spotsylvania County man has uveal melanoma, a rare cancer of the eye that occurs in only six or seven people out of a million. In half the cases, the disease spreads to the liver, which is what happened to Thurber. It becomes so aggressive, it’s fatal in two to eight months if left untreated.

But no one might guess that Thurber, a teddy bear of a man with a salt-and-pepper beard, is embroiled in such a life-and-death battle. He’s too busy talking about how blessed he is to have the love of a wife and daughter and good people praying for him.

Or, he goes into detail about the expertise and kindness of doctors and nurses at Thomas Jefferson University Hospitals in Philadelphia. He’s treated there once a month because it’s one of few facilities worldwide specializing in metastatic uveal melanoma, and he sings the praises of his caregivers.

“I am treated so compassionately and professionally that my spirits are always boosted,” he said. “The nurses come in there, and they’re the true masters of calming the soul, calming the spirit, with just a simple touch.”

Then there are all the “prayer warriors,” neighbors around his home off State Route 208 who’ve offered help. Thurber, a land surveyor, has seen the same compassion from clients, who work around his schedule of treatments and recovery. He’s usually out of action for six days a month.

“It’s amazing how human beings can really touch you and make the quality of your life so much better without actually doing anything to you,” he said, “except just being there in a supportive kind of way.”

Chuck Thomas is a deputy with the Spotsylvania Sheriff’s Office and has been the Thurbers’ neighbor since 1991. He’s seen a change in Thurber since the cancer diagnosis, but not in the way some might expect.

“Instead of getting depressed, he’s gone the other way, saying, ‘I’m going to do everything I can until it does stop,’ ” Thomas said. “He’s always had a great attitude, but he’s so positive about himself now, he’s just happy. And he’s more outgoing, too.”

In the past, the two might exchange a few pleasantries at the mailbox and be on their way. “Now you stand there 30 minutes and talk,” Thomas said.

And not just about the cancer, although Thurber clearly wants to stress the importance of regular eye exams. By educating himself about treatments and test results, then discussing options with his wife, Liz, he has a better handle on the disease.

“It demystified everything,” he said. “I became less afraid of what it was.”

He’s also relied heavily on his faith and infused his optimism with his own brand of “tumor humor.” He mentioned counting on getting “a sharp needle stuck in my eye” on previous visits and calls himself a lucky guy, all things considered.

“I feel fine. My energy level is way up. It always is,” he said, smirking. “And I eat a lot of vanilla ice cream.”

‘HOW COULD THIS KILL YOU?’

During a routine eye exam in 2010, Thurber was told he had a freckle on his retina, but didn’t think anything of it. When the office called every six months or so afterward, to schedule another exam, he figured, “It’s time for you to sell me another $400 pair of glasses” and didn’t respond.

“If I had known the seriousness of my freckle, that would have been a completely different story,” Thurber said. “Doctors don’t want to alarm you and tell you you’ve got a freckle that could turn into a huge melanoma and kill you.”

In May 2018, his peripheral vision started shrinking as if someone was pulling a dark curtain across his eye.

He saw local doctors and was referred to Wills Eye Hospital, also in Philadelphia, where specialists found a 16-millimeter tumor, almost as wide as a dime, on his right eye.

Within two days, he had surgery to have a disc, filled with radioactive pellets, stitched onto the back of the eye to kill the tumor. The radiation was kept in place for eight days, twice the normal duration, because the tumor was so large.

The Thurbers understood things were serious, but Liz Thurber thought that meant he might lose vision in the affected eye. When Dr. Carol Shields, chief of ocular oncology services, entered his room, she told the residents accompanying her that she was more concerned about saving this patient’s life than his eyesight.

Liz Thurber was stunned. Her husband, who turns 69 this month, was still running around and working, as always. He seemed perfectly healthy, with no signs of sickness.

“How could this kill you?” she wondered.

It was the first of many times her husband would believe that an illness is tougher on the loved ones than the patient.

“It practically breaks my heart,” he said. “If I die, what have I lost? Nothing. If I die, what has Liz lost? A husband of almost 30 years and the father of our daughter.”

The radiation nuked the eye tumor to the point that Jim Thurber calls it “a Chernobyl eye,” but genetic testing suggested it was likely to spread. A magnetic resonance imaging scan confirmed it already had, and by Thanksgiving, things looked grim.

The Thurbers were making his funeral arrangements.

They switched from Wills to Jefferson Hospitals, where a team of eight doctors specialize in cancers that start in the eye and move to the liver.

“Then the battle began in earnest,” Jim Thurber said.

Surgery in these kinds of cases isn’t practical because there often are many tumors on the liver, Dr. David Eschelman told those gathered at an April symposium about metastatic liver disease. There’s no effective drugs or therapies proven to reduce the risk of the cancer spreading to the liver—the chosen path in 90 percent of cases, Eschelman said.

So the team at Jefferson developed what it calls a novel therapy called immunoembolization, designed to jump-start the body’s immune system and slow the blood flow to the tumors in hopes they’ll die.

The procedure involves temporarily trapping the immune stimulant in the liver “and letting his body fight the tumor,” said Dr. Carin Gonsalves. She and Eschelman are interventional radiologists who do surgical procedures through tiny incisions, usually under the guidance of X-rays.

Or, as Eschelman puts it, they’re “compassionate plumbers.”

“Nine months out and he’s still showing stability with this one treatment, and we’re grateful for that,” she added.

Because the disease is so aggressive, doctors consider a treatment successful if the tumor is reduced slightly or stays the same.

“Static is better than kinetic when it comes to liver cancer,” Thurber said.

He and his wife will continue the trek north as long as they get favorable results. They often bring goodies for the nurses with them.

“We are trying to repay their gentleness with cookies and doughnuts,” he said.

On his last trip, he also took a special gift for his doctors, including Dr. Takami Sato, who directs the metastatic uveal melanoma program at Jefferson. Thurber gave each one a .45-caliber bullet made of silver as a way to encourage them to keep searching for the mythical, almost magical solution to curing the rare disease.

“We thought he was crazy giving us a silver bullet,” Gonsalves said initially. But after she read the description he attached, she came to see Thurber’s response to eye cancer in a different light.

“It was really quite touching,” she said.

Immunoembolization is a maintenance program, not a "once and done like getting your appendix removed," Dr. David Eschelman said at an April symposium on metastatic uveal melanoma.

The rare disease starts in the eye and spreads to the liver, as it did with Spotsylvania County resident Jim Thurber. Once a month, he visits Thomas Jefferson University Hospitals in Philadelphia for treatment.

Liver tumors get blood through arteries while the liver itself gets blood from the portal vein, which brings blood to the organ from the spleen, stomach, pancreas and intestines.

By slowing down the flow of the artery, doctors hope to "starve the tumor of its oxygen" and kill it, said Dr. Carin Gonsalves.

When tumor cells die, the immune system reacts and steps up to fight, Eschelman said. Adding an immune stimulant may encourage the body's own defense system to fight even more, he said.

The procedure itself only takes about 45 minutes, as doctors insert a catheter through Thurber's groin and administer the two-pronged treatment. But he's got to lie still for six hours afterward to make sure there's no damage to the femoral artery, the vessel through which the treatment is given, Gonsalves said.

At the risk of being a bit esoteric, I am focusing this month’s column on health and social inequities in the U.S.

Land surveyor Jim Thurber stays positive, and has kept working, after being diagnosed with a rare eye cancer that spread to his liver. He believes 'cancer killers' are just around the corner.

Thurber lost most of the vision in his right eye as a result of a tumor and has to be careful outside because his depth perception 'is somewhat flawed.'

Jim Thurber is grateful that his wife, Liz, a civil engineer in Arlington, can take off as needed to go with him on monthly trips to Philadelphia for treatments.