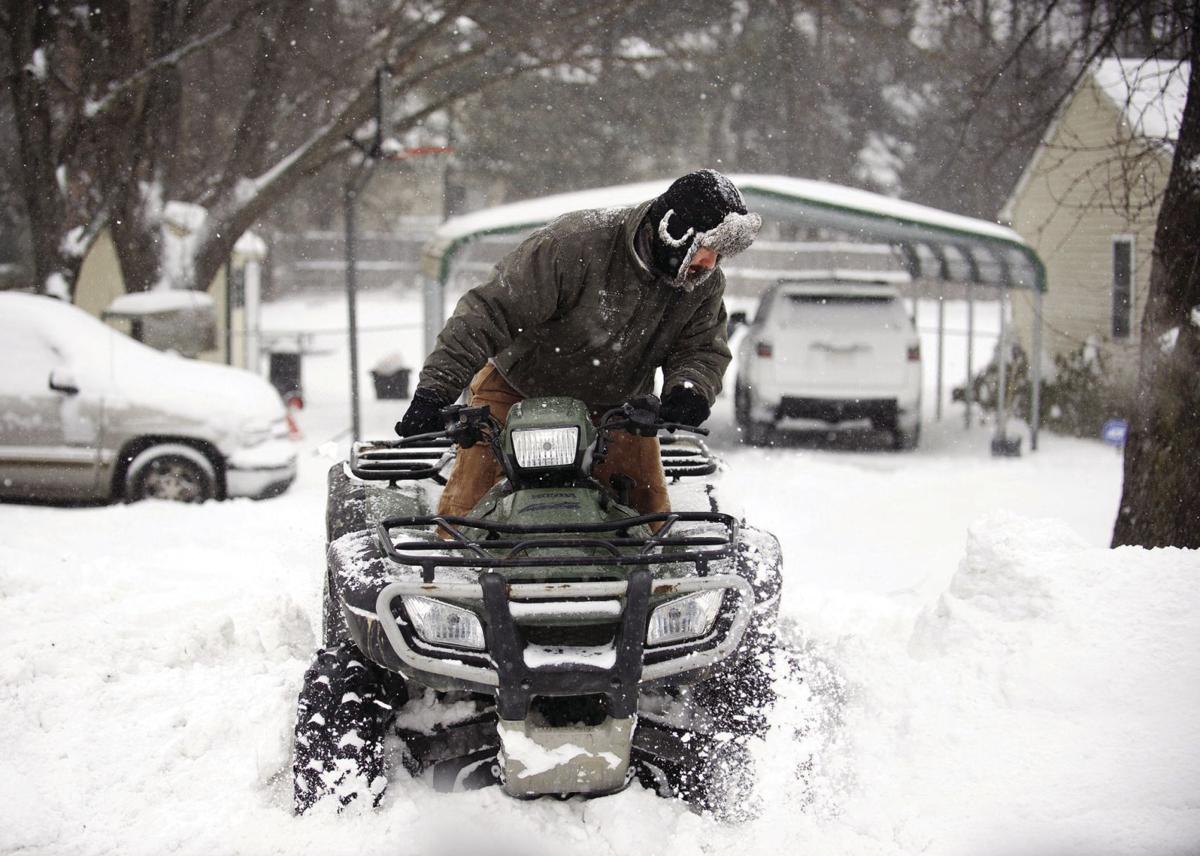 Kenny Critz uses a four-wheeler to flatten snow in his driveway in Spotsylvania in January 2016. 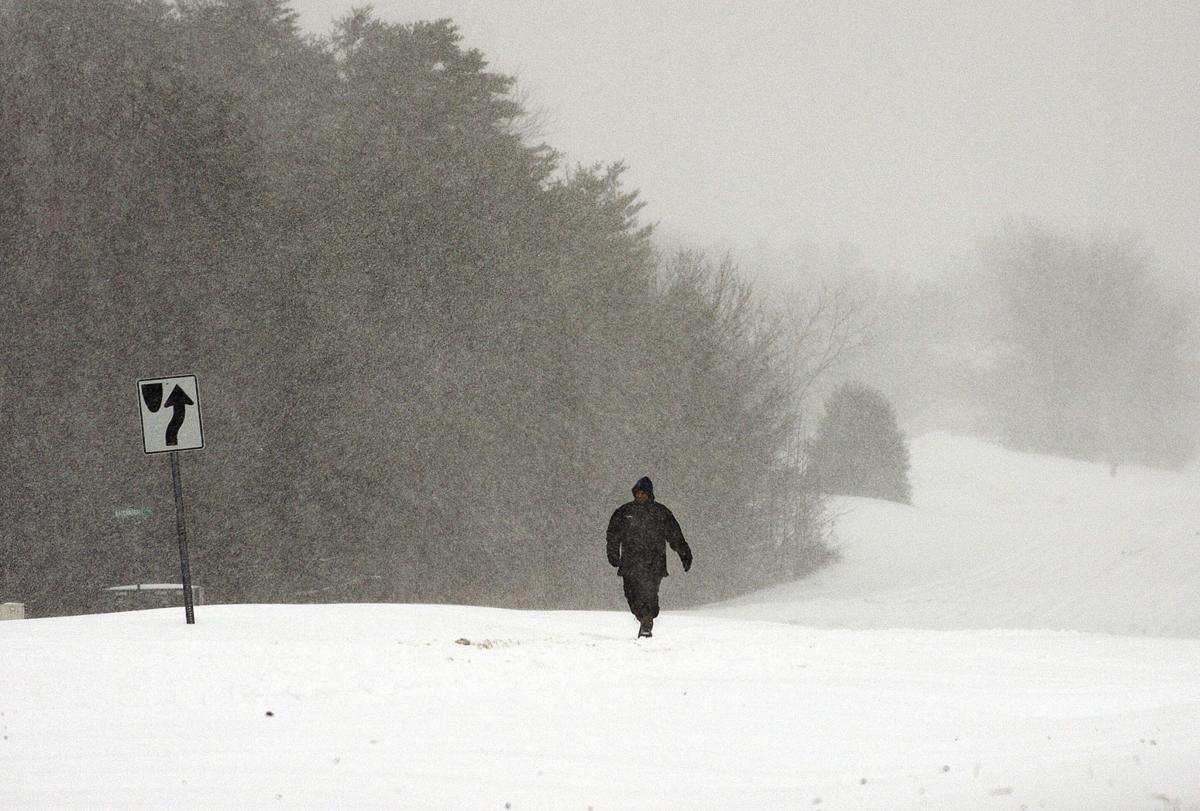 A man walks during a snowstorm near Courthouse Road in Spotsylvania. 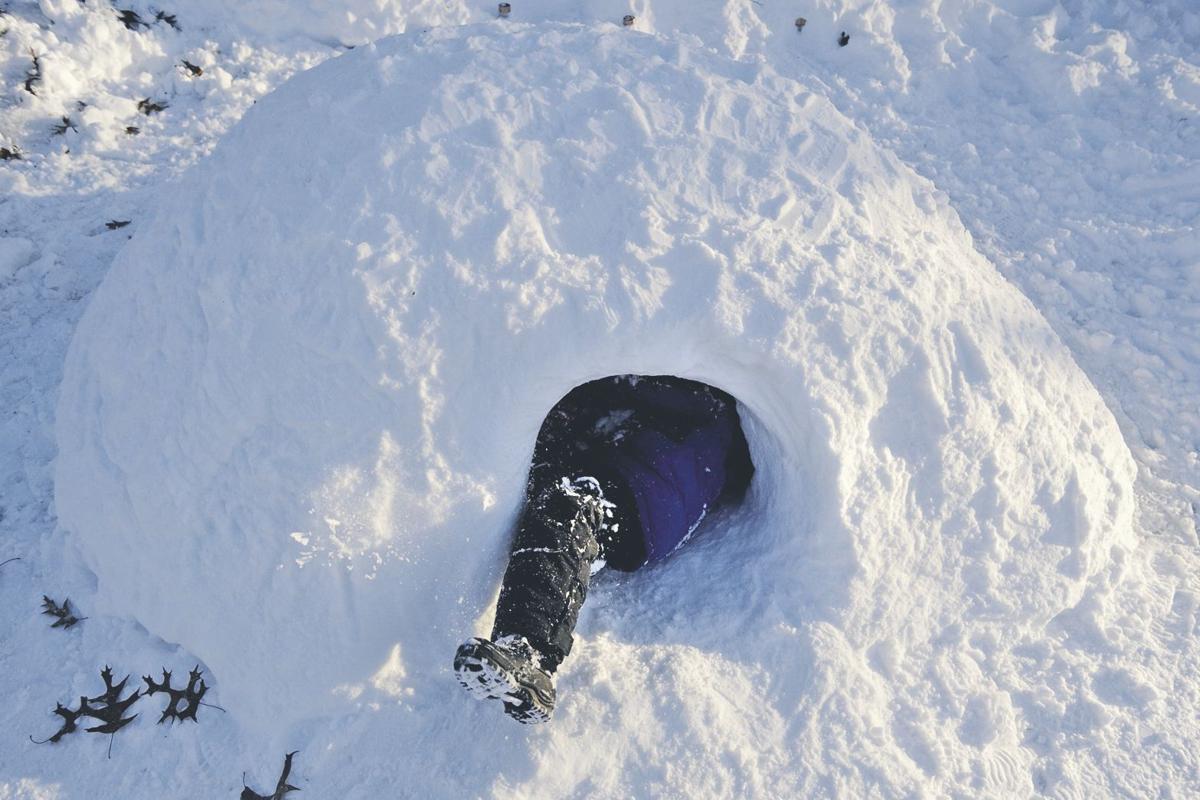 Triston Blair, 8, climbs into an igloo he built in his front yard. 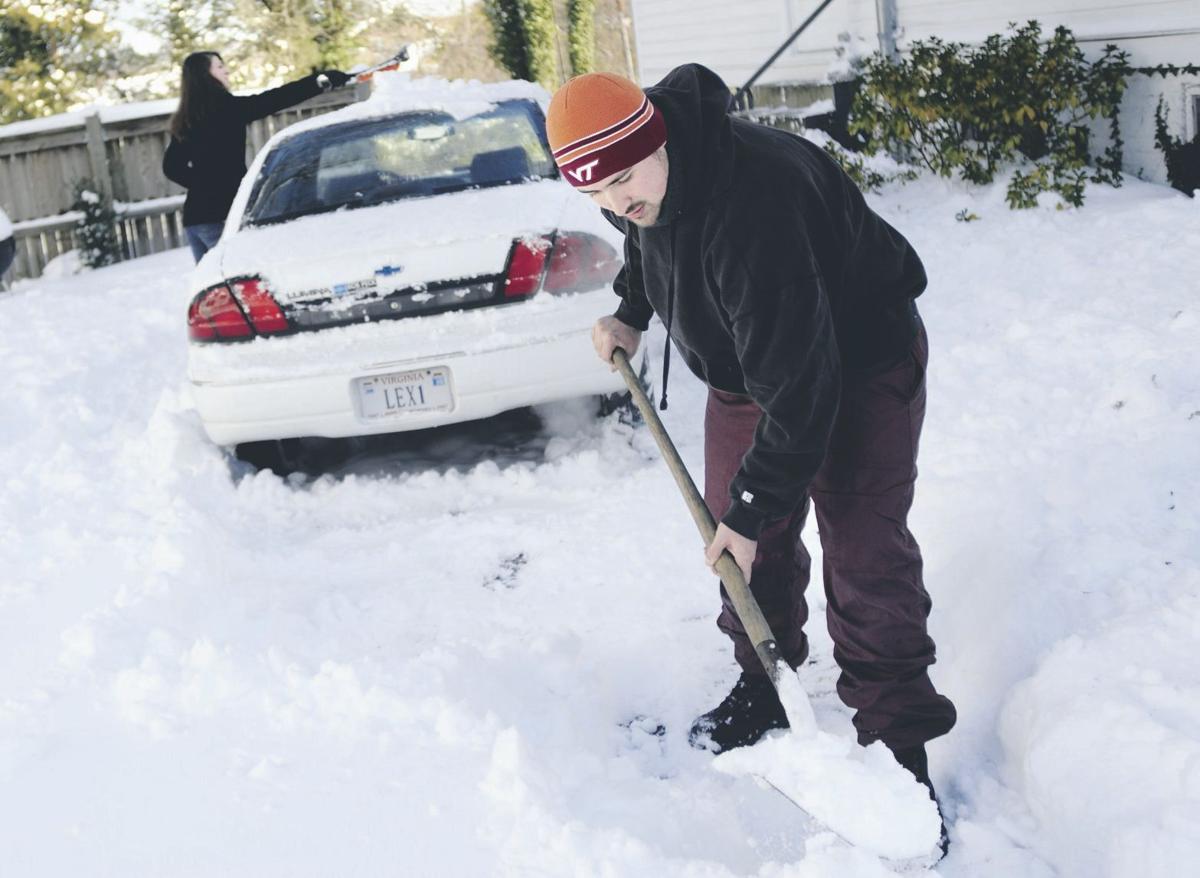 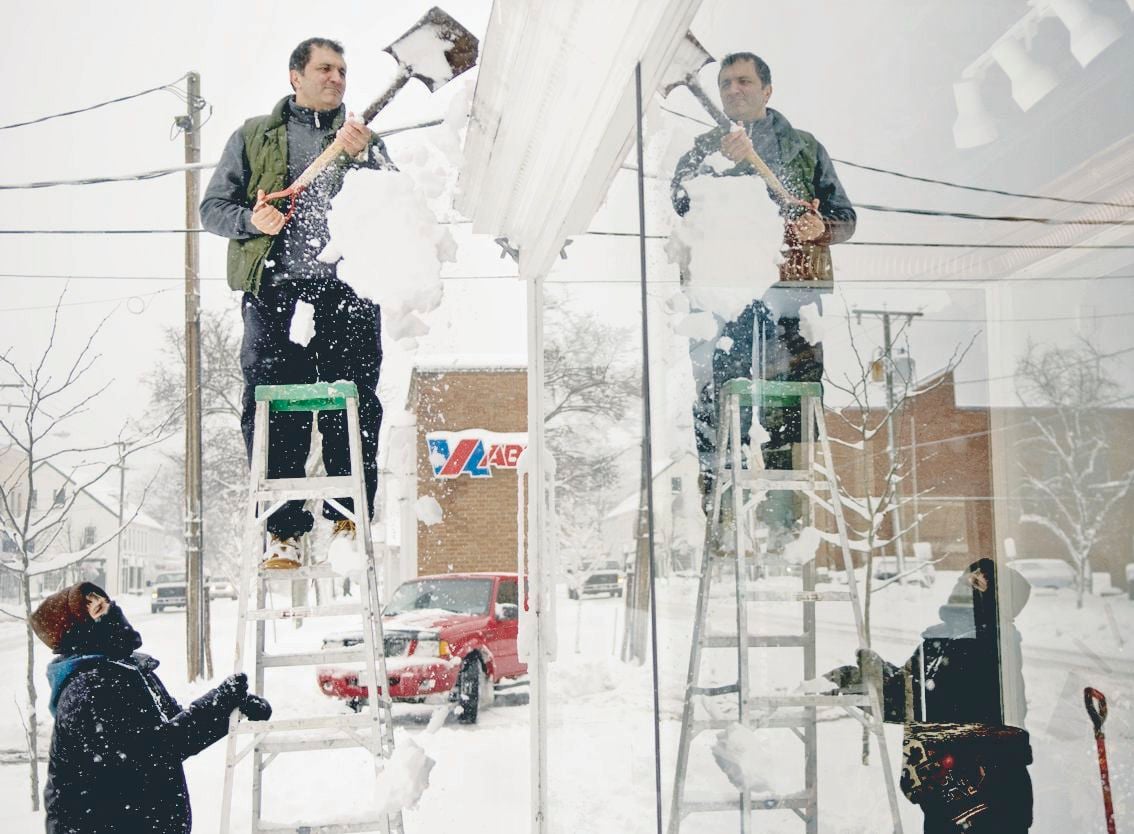 Armand Matini watches his father clear off the roof of his store in the city. 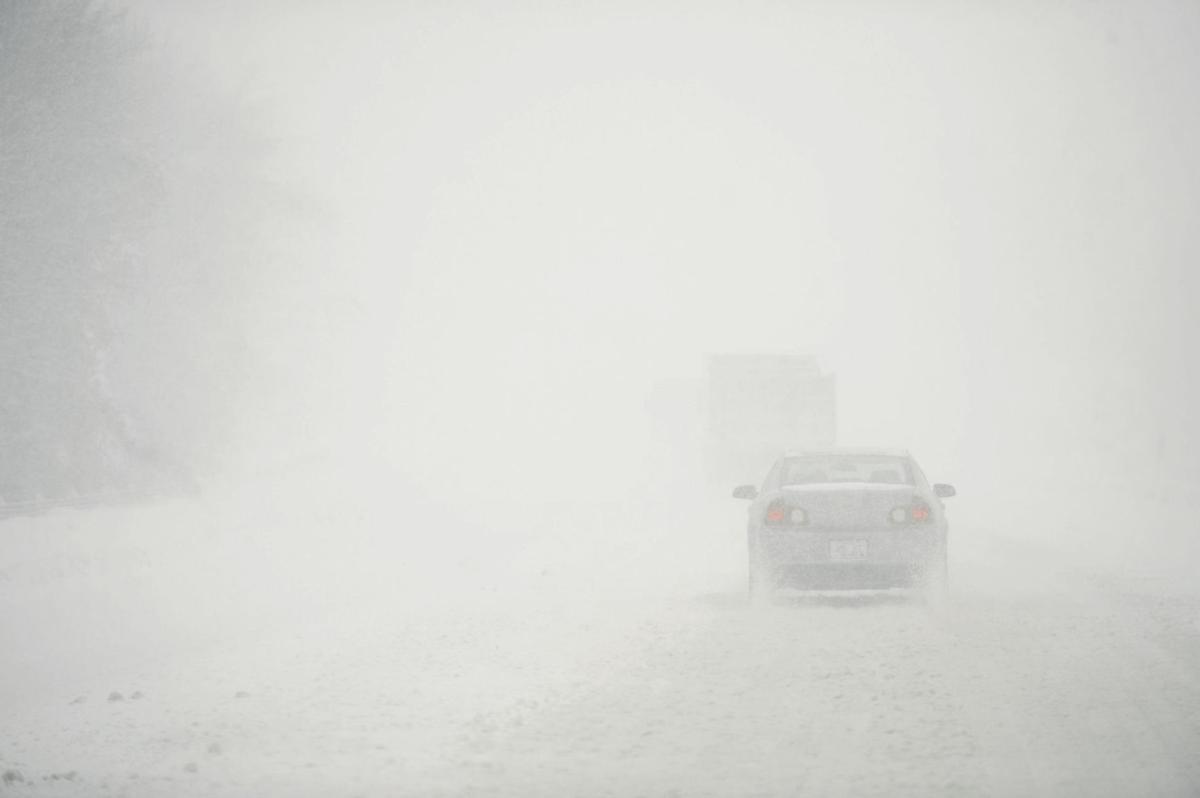 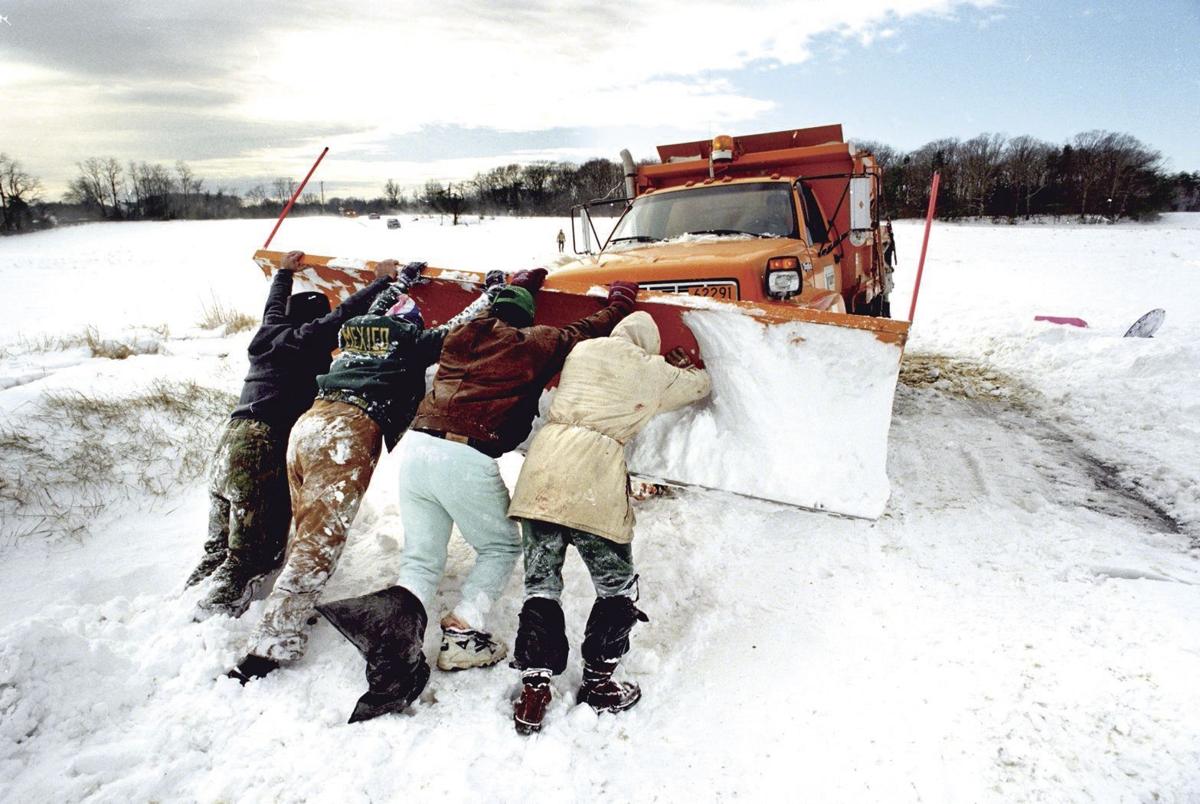 Nearly 50 inches of snow fell in the region in January and February 1996. 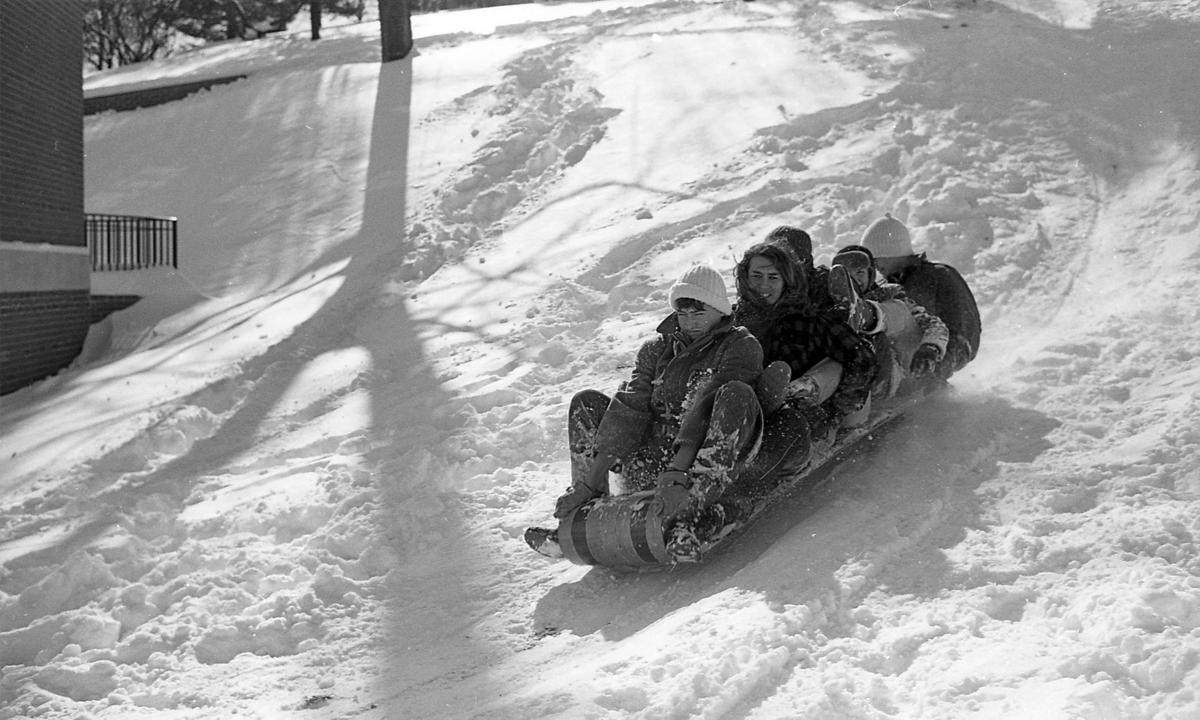 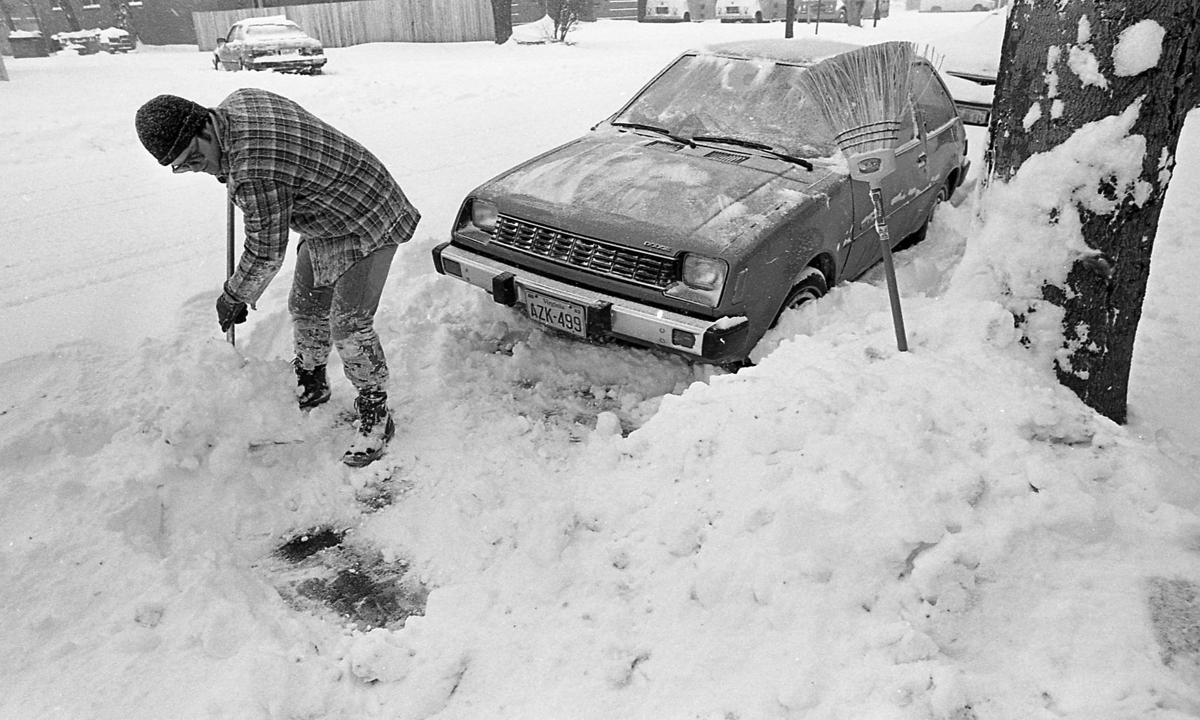 Glen Roles digs his car out on Caroline Street in downtown Fredericksburg. 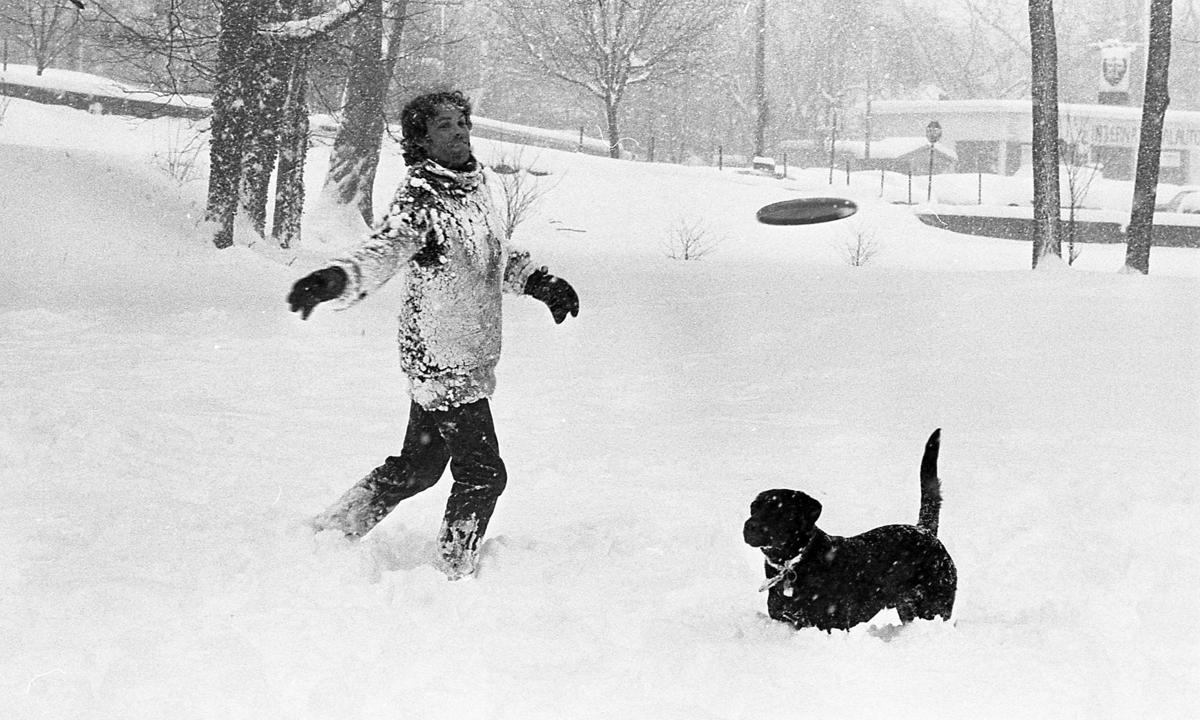 Tom O’Hara and Mika enjoy a game of Frisbee in January 1987. 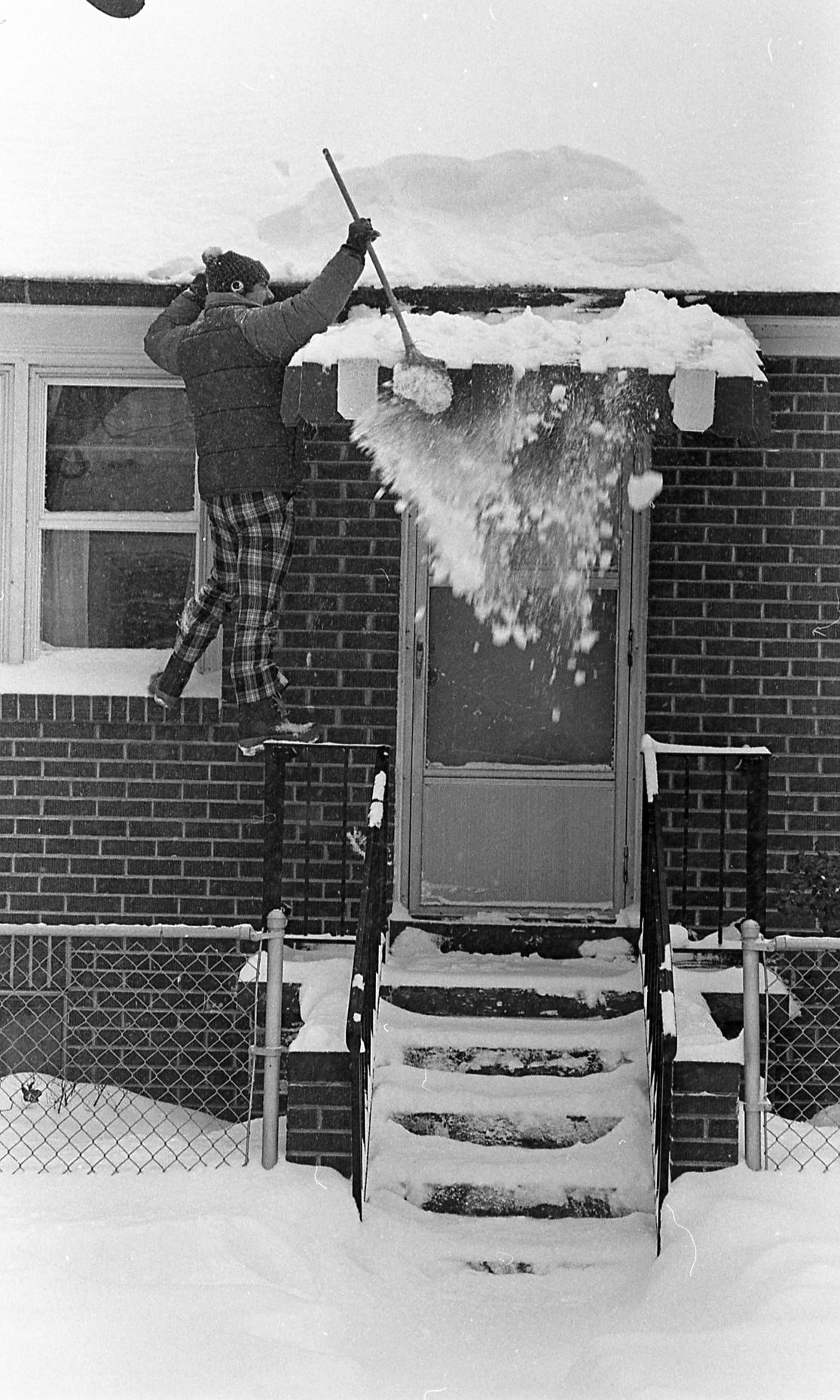 George Truslow clears snow off his porch roof in downtown Fredericksburg in February 1983. That storm dropped more than 2 feet of snow in the region.

BY DONNIE JOHNSTON THE FREE LANCE–STAR

DESPITE fresh evidence that piled up over the past 24 hours, we have been in a prolonged snow drought.

Whether this is due to climate change or is simply a natural phenomenon can be debated until the cows come home, but it is a fact. Monday brought our first good snow since 2016, and we haven’t had a truly hard winter since 2009–10.

So while snow lovers were just rewarded for hoping and praying for snow, I thought it might be fun to look back at notable winter storms from the past.

The Jan. 22–23 blizzard of 2016 dropped as much as 25 inches of snow on our area and caused all kinds of problems. Back roads were impassable for several days and schools were closed for almost a week. That was out last really good snowstorm.

The best winter (for snow lovers) in recent memory was 2009–10. On Dec. 18–19, it snowed about 20 inches (depending on location and terrain) and we indeed had a white Christmas.

Then six weeks later, on Feb. 5, another storm hit and dropped about 2 feet of white. Winds whipped the dry snow into drifts that required the use of heavy-duty front end loaders to clear the highways in northern Fauquier County.

A third storm five days later added another 3 inches in the Culpeper–Fredericksburg area, but again paralyzed upper Fauquier and Loudoun counties with more than a foot.

The biggest snow in the memory of most people under 40, however, began on Jan. 6, 1996. Snow started falling on Saturday night and continued all day Sunday and into Sunday night.

With temperatures in the teens and low 20s, winds blew the dry snow into drifts and caused roads to become impassable. When it was over, about 20–25 inches had accumulated in the Piedmont of Virginia, with about 32 inches along the foothills of the Blue Ridge Mountains in Madison and Rappahannock counties.

Atop the Blue Ridge, along the Skyline Drive, totals ranged from 45 to 50 inches.

Two storms, one on Thursday and one on the following Sunday, dumped 17 inches of snow each on the area in January 1987, three years after the Blizzard of 1983 gave us 24–30 inches.

The 1983 storm was the first significant snow in more than a decade in our area and we must go all the way back to late January and early February of 1966 to find another strong storm. That winter saw four back-to-back snowstorms in the space of three weeks drop about 24 inches of snow.

Up to 36 inches of mixed precipitation—mostly heavy, wet snow—brought down power and telephone lines, blocked roads and caused roofs to collapse. Some people were without electricity for two weeks and schools were closed for more than a week.

In the Shenandoah Valley, military helicopters had to be brought in to feed hay to cattle.

The Knickerbocker Storm of 1922 dropped about 22 inches of snow and also caused roofs to collapse.

The three greatest snowstorms of the 19th century occurred in 1832, 1857 and in 1899. No snow totals were recorded for the first two, but all agreed that they were monsters.

More than 36 inches fell in the Blizzard of 1899, which is regarded as the worst winter event in the recorded history Virginia and the Eastern half of the United States.

It was not just the snow, but the sub-zero temperatures that caused people and animals to freeze to death. That winter the Mississippi River froze all the way to New Orleans. Low temperature records that February have yet to be broken.

Yes, we have had some good snowstorms over the years—and centuries—and we are likely to see more in the future, despite what climate change forecasters predict.

Remember, we went from 1966 until about 1983 without a really bad snowstorm, so sometimes nature takes a breather.

We saw a big one Monday, and perhaps we’ll look back at it one day as a worthy piece of winter history.

Watch Now: Tricks to get the most out of your tech devices

Watch Now: Tricks to get the most out of your tech devices

Five of the best foods for lowering blood pressure

Five of the best foods for lowering blood pressure

HEALTH MATTERS: COVID-19 has taken away a lot, but not our choices

Choices. We make so many each day. From whether to hit snooze on our alarm clocks in the morning to whether we want to squeeze in one more epi…

Brady Plucker, a student at Riverbend High School, has chosen to study congenital anomalies, fetal/neonatal surgery and the impact of trauma on the neonate and family in the Neonatal Intensive Care Unit.

Sticker shock is a real thing for car shoppers right now: Here's why

The price to buy a new or used car is increasing at a faster rate than the average wage growth in the nation, a study has found.

Mars Wrigley, which owns M&Ms, is trying to make the characters — particularly the female ones — more "current." They'll have more prominent placement in ads, with the aim of "a little bit more gender balance."

A look at the richest town in every state

The locations are ranked by the median household income, and ties are broken by the percentage of people annually earning more than $200,000.

Here's how to get your free home COVID test kits

Home COVID tests are now available at no cost to most Americans, as part of the Biden administration's effort to increase testing around the United States.

A 3-year-old's arm gets caught in a moving treadmill, CBD may be a solution to blocking COVID symptoms, plus more health news.

Kenny Critz uses a four-wheeler to flatten snow in his driveway in Spotsylvania in January 2016.

A man walks during a snowstorm near Courthouse Road in Spotsylvania.

Triston Blair, 8, climbs into an igloo he built in his front yard.

Armand Matini watches his father clear off the roof of his store in the city.

Nearly 50 inches of snow fell in the region in January and February 1996.

Glen Roles digs his car out on Caroline Street in downtown Fredericksburg.

Tom O’Hara and Mika enjoy a game of Frisbee in January 1987.

George Truslow clears snow off his porch roof in downtown Fredericksburg in February 1983. That storm dropped more than 2 feet of snow in the region.