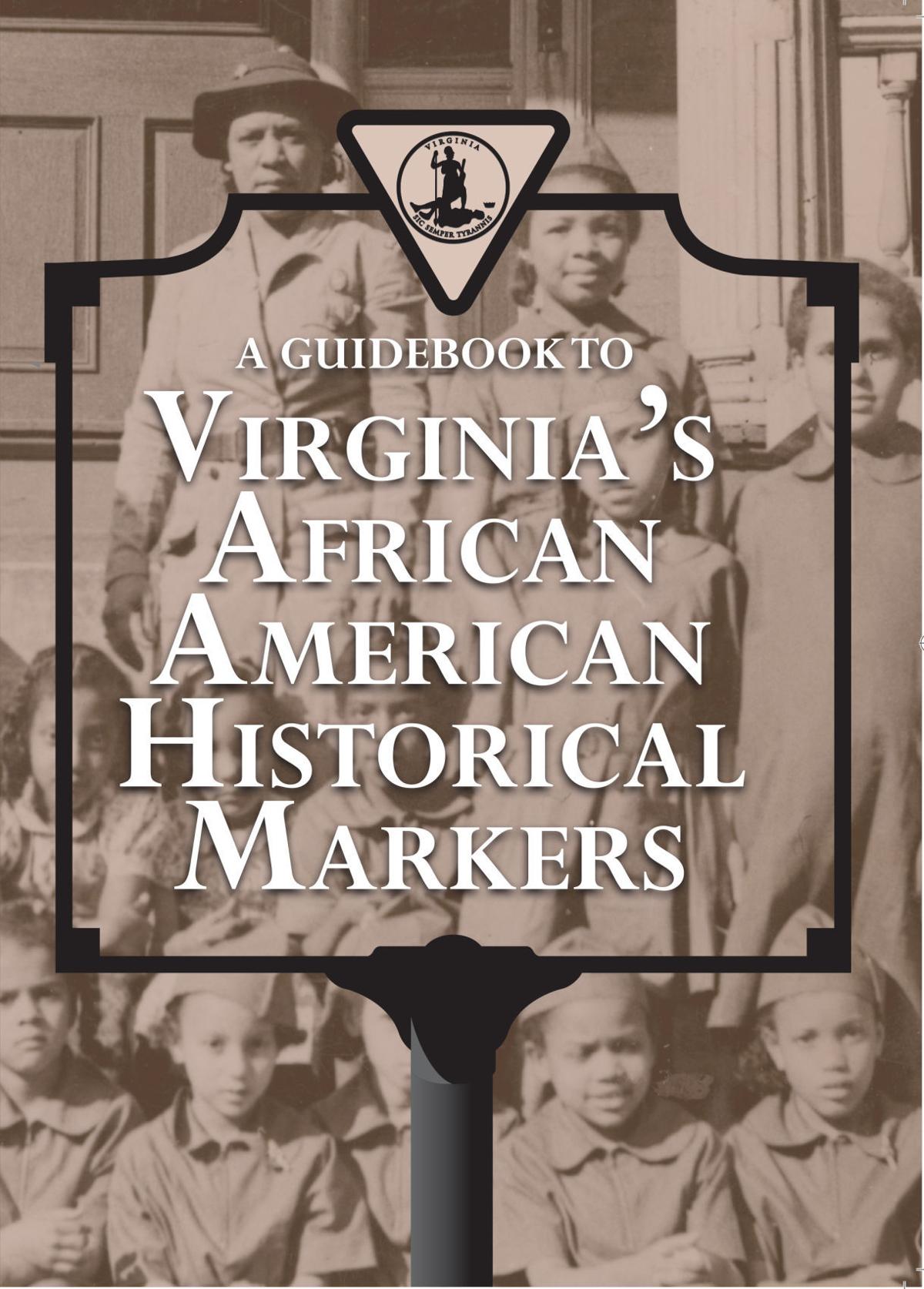 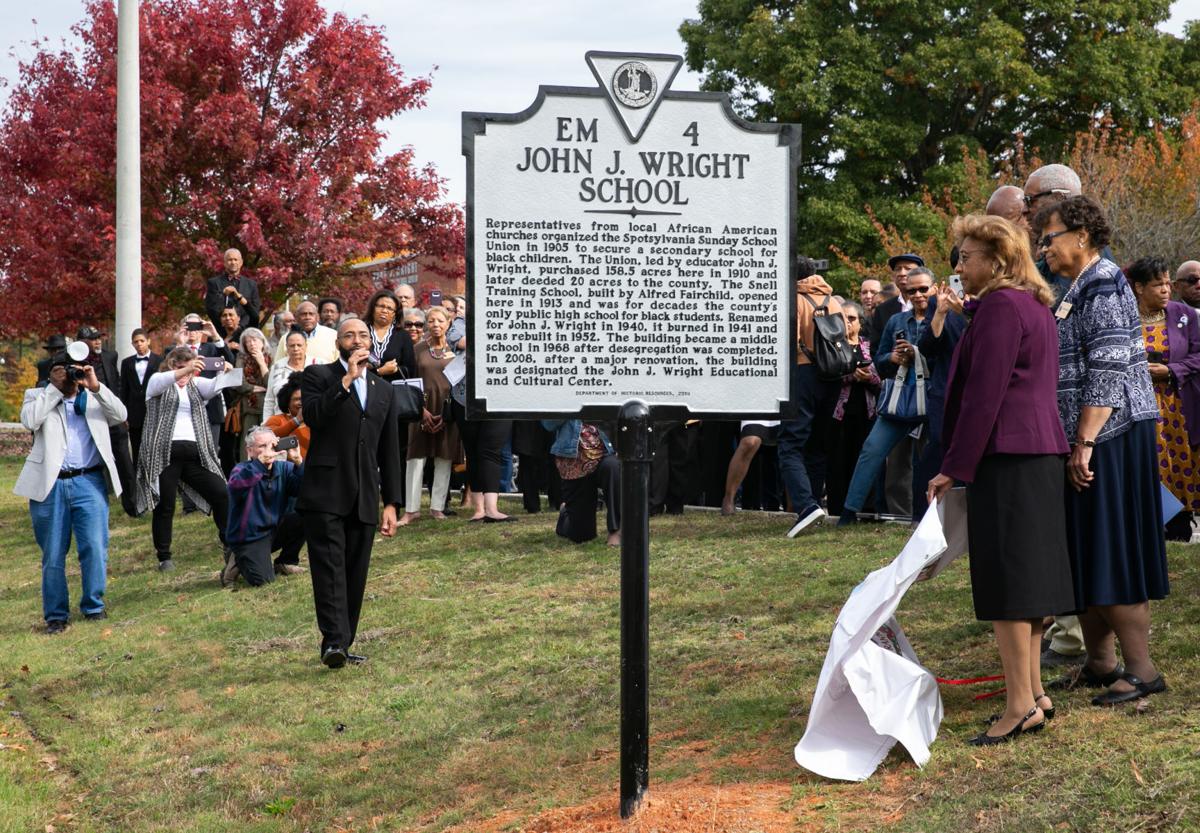 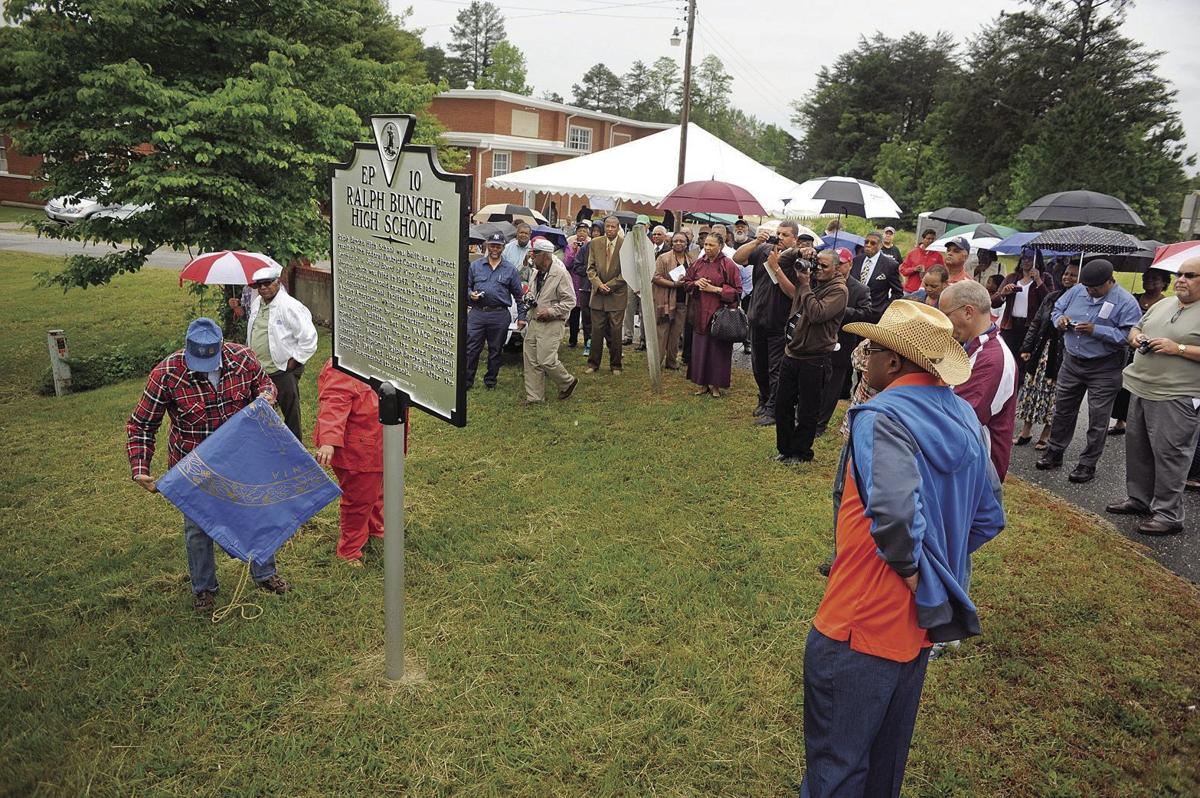 A historical marker is unveiled during a ceremony in front of Ralph Bunche High School in King George County on Saturday, May 18, 2013.

The Virginia Department of Historic Resources has released a new book that features the text and locations of more than 300 historical roadway markers that highlight African Americans and their contributions to state history.

The 110-page book was produced to commemorate the 400th anniversary of the arrival of the first known Africans to present-day Virginia.

That group of 350 Angolans was bound for Veracruz, Mexico, in 1619, when their ship, the San Juan Bautista, was robbed of its human cargo by pirates. Those raiders transported the Africans aboard the ship White Lion to Point Comfort, near Hampton, in August of that year.

The 309 markers featured in the DHR’s “A Guidebook to Virginia’s African American Historical Markers,” range from the Colonial era through the civil rights movement.

Nearly all the markers contained in the guidebook were erected along Virginia roadsides within the past 40 years, including new markers approved in June by the Virginia Board of Historic Resources, which is authorized to designate new historical markers.

Locally, there are three markers in Stafford County, including one for freed slave and minister Anthony Burns, a second for the Bethlehem Primitive Baptist Church and cemetery, and a third for Stafford Training School, a former African American school known today as the Rowser Building.

Spotsylvania County has three markers, including one for civil rights leader James Farmer. The others recognize the 23rd United States Colored Troops stationed at the Alrich Farm and the John J. Wright School, the former site of the Snell Training School, which was the county’s only public high school for black students.

Virginia’s historical highway markers cost about $1,700 each to manufacture. In most cases, each weighs about 100 pounds and measures approximately 42 by 40 inches. The markers, cast in aluminum, have black text over a silver background. For generations, Virginia’s hand-cast markers have been manufactured at Sewah Studios, a foundry in Marietta, Ohio.

In addition to its unique topic, each sign includes an alphanumeric identification code, the Seal of the Commonwealth within an upside-down equilateral triangle positioned at the top of the sign, and text along the bottom that reads, “Department of Historic Resources,” along with the year the marker was created.

“One of the requirements of the marker program is that anybody who sponsors a marker, that organization or that individual, has to cover the cost of manufacturing the marker,” said Randall Jones, public information officer for the Department of Historic Resources.

Jones said the Virginia Department of Transportation is a key partner in the road marker program.

“They install them, covering the cost of the pole and the installation in most places,” said Jones. “Independent cities, outside of VDOT’s jurisdiction, absorb their own costs.”

Virginia’s Historic Highway Marker Program—the oldest program of its kind in the nation—began in 1927, when the majority of state roadways were single-lane dirt roads. In addition to black history, the state’s 2,600 markers address other topics, including the history of women, Virginia Indians and other people and groups previously under-represented during the program’s 90-plus years of operation.

The program was first conceived by amateur historian Richard C. Wright, who presented the idea to outgoing Virginia Governor Elbert Lee Trinkle in the late 1920s.

Byrd, a roadway improvement advocate, served as governor of Virginia from 1926–30. His biographer wrote, “[Byrd] advocated building roads to state shrines such as Jamestown and Monticello and called for historical markers along roadways, the first of which appeared in Fredericksburg.”

According to the DHR, the first batch of markers in the program were placed on U.S. 1, between Fredericksburg and Richmond.

The DHR is undertaking a project to update some of the older markers in the state with additional information. Jones said some of those markers lose their historic impact because they lack information.

Jones cited one such marker south of Harrisonburg. Erected in 1927, that simply reads, “Sheridan Turned Here.”

As for future topics for roadside markers, Jones said his department receives more applications than it can approve.

“We don’t approve every suggestion that comes through the door,” Jones said. “They have to address a topic that has, at the very minimum, regional importance, but preferably, regional, state and sometimes national importance.”

“A Guidebook to Virginia’s African American Historical Markers” sells for $12.95 and is available through local bookstores and online book retailers, or directly from the book’s distributor, University of Virginia Press, via upress.virginia.edu.

Spectacularly upgraded one-level villa for sale in Fawn Lake for $524,900

Throughout the past four years, the one-level villa has been completely and tastefully morphed into a serene estate. And now, that estate is for sale and awaiting a new owner.

How to stop glasses from fogging up when wearing face mask

It's a pesky problem: As soon as you strap on your cloth face mask and head out the door, your glasses fog up. But there's a simple fix for that.

The Culpeper Food Closet is expanding its services, from once-a month visits to twice-a-month.

Wildcat Battalion recognized as best unit in its region

In only its third year, the Mountain View High School Marine Corps Junior Reserve Officers’ Training Corps program has won the Marine Corps Reserve Association Award for the 2019–2020 school year, recognizing it as the most outstanding MCJROTC unit in its region.

Saying Grace: Always remember where our source of power comes from

When we decide to follow Christ, we become members of His body here on earth. Each of us is given a different spiritual gift that is meant to contribute to the health and well-being of the body as a whole.

COVID-19 or something else? How coronavirus symptoms compare to other illnesses

Before 2020, you might not have worried much about a tickle in your throat or a little tightness in your chest. But that’s changed.

Seven-bedroom waterfront colonial for sale in gated Fairways community at $1,269,000

A hidden bedroom with a bookcase door. An indoor basketball court. A pond view. Multiple gourmet kitchens and laundry rooms on all three levels?

ElderStudy is going virtual, via Zoom, for at least this first semester, with over 60 meetings and informative classes to offer.

A historical marker is unveiled during a ceremony in front of Ralph Bunche High School in King George County on Saturday, May 18, 2013.