Retro Reads: Remembering Camp Cobb in Fredericksburg
0 comments
Share this
Only $5 for 5 months
1 of 3 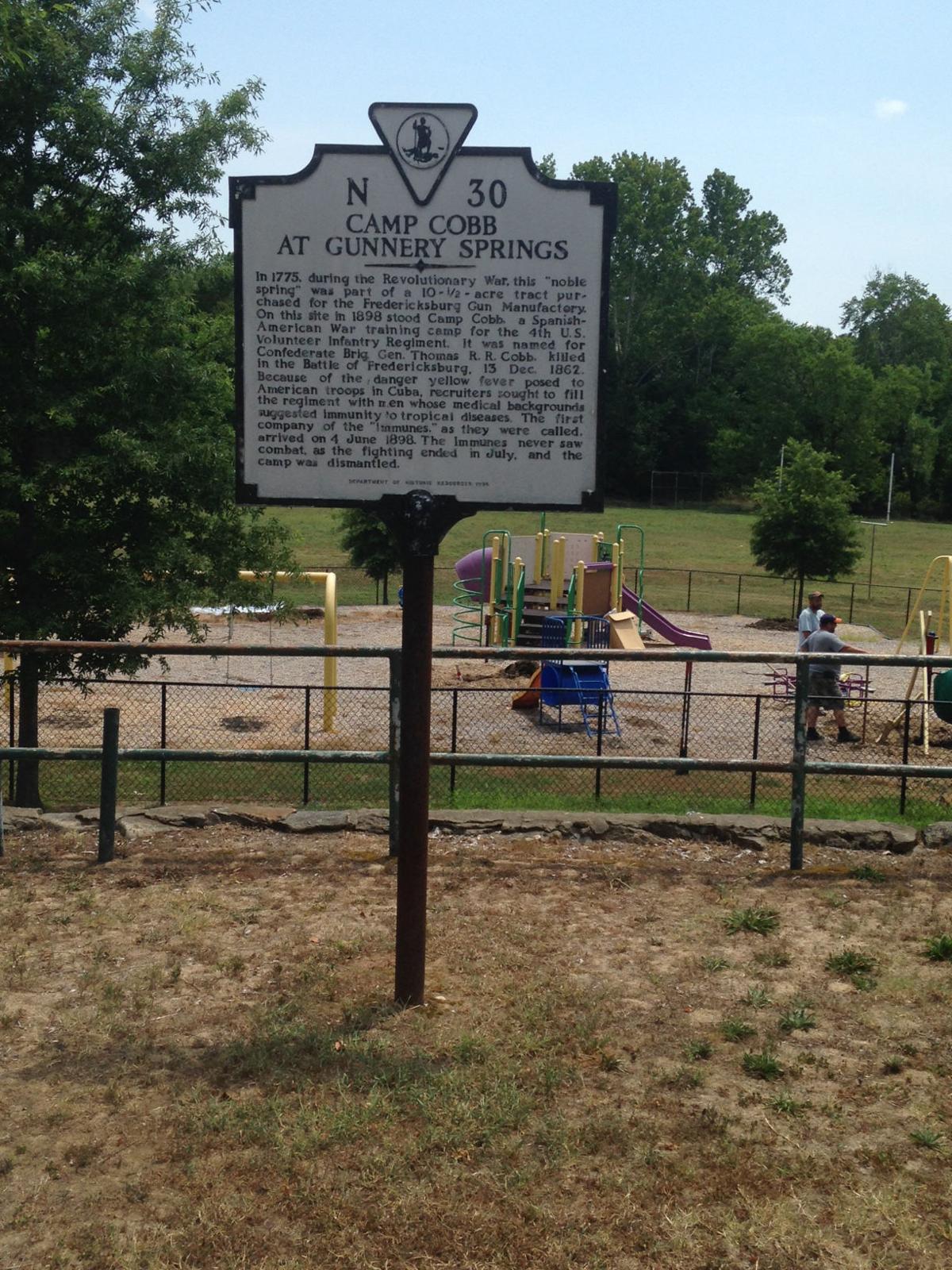 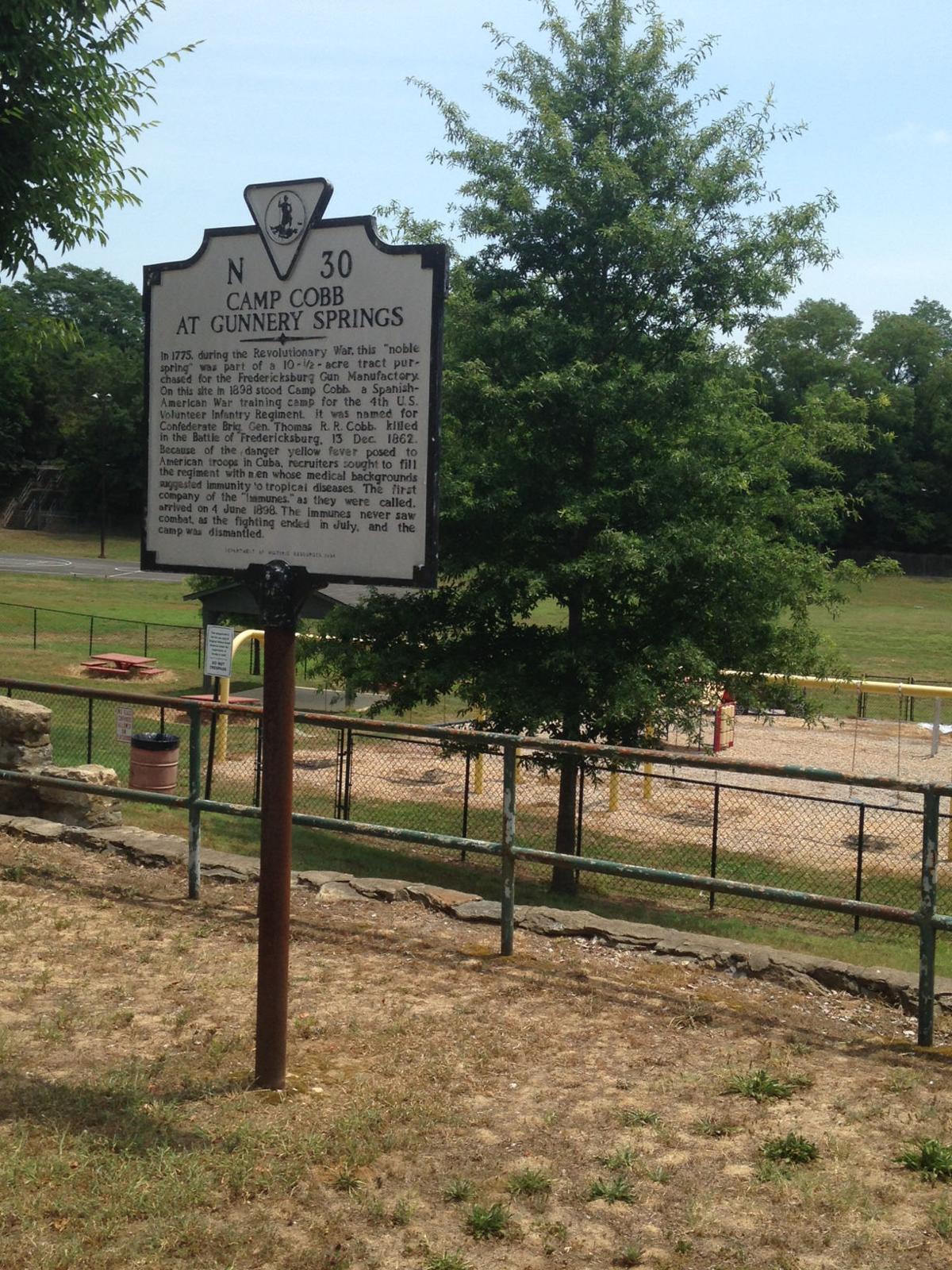 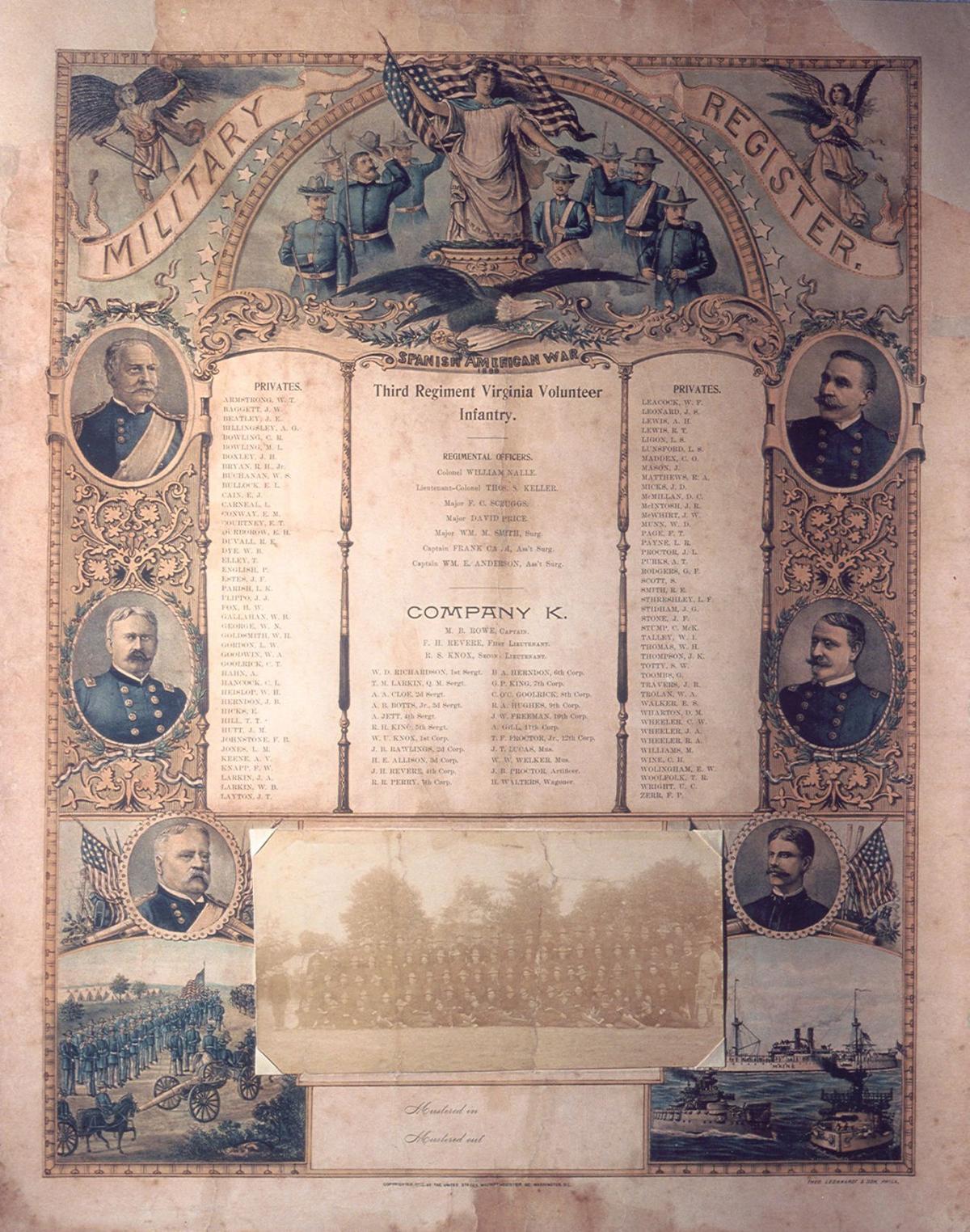 While members of the 4th U.S. Volunteer Infantry Regiment trained locally during the Spanish American War, young men of Fredericksburg joined Company K and trained in Fairfax County as part of the 3rd U.S. Volunteer Regiment. The Central Rappahannock Heritage Center has restored a color military register listing those men. The unrestored document is seen below.

Last month, Retro Reads covered Civilian Conservation Corps camps, whose workers improved local battlefields in the late 1930s. This month, we’ll roll back the clock 40 more years and drop in on another camp in the area—for soldiers supposedly immune to tropical disease.

Gunnery Road, like everything else in Fredericksburg, has layers of history. Today, the site contains the playgrounds adjacent to the original Walker–Grant School. During the Revolutionary War, a gun manufactory there supplied muskets to the Continental Army and gave the road its name. Later, it was briefly the location of Camp Cobb, home to the 4th U.S. Volunteer Infantry Regiment during the Spanish–American War.

If you’ve forgotten exactly what the Spanish American War was about, that’s probably because it was over in the comparative blink of an eye (less than four months in 1898), prompting some politicians to call it a “splendid little war.” The “Immunes,” as the men of the 4th were known, were soldiers recruited mostly from “fever-prone” areas of the South, and it was hoped that these soldiers would not fall victim to diseases such as yellow fever that claimed so many lives of soldiers sent to tropical climates.

War was declared in April, but it was not until June that the 4th Volunteers arrived at the mostly empty field in Fredericksburg, soon named Camp Cobb. To say the army was unprepared was an understatement: The men arrived with no uniforms or tents, and only a couple days of training.

Unlike the invasion of Union soldiers that had occurred 35 years earlier, these federal soldiers were welcomed with open arms. Their presence was a result of lobbying by the Business Men’s Association of Fredericksburg. At the group’s July meeting, members announced with delight that the men had “spent thousands of dollars with our people and the government has purchased immense supplies from our merchants.” The association also sold tickets on excursion boats farther down the Rappahannock to visit Fredericksburg, and the camp was one of the draws for tourists.

Some local citizens were a little too enterprising. “It is reported that whiskey is being sold on the outskirts of camp by residents of the city. A sharp lookout will be kept, and if the offenders are caught, the full extent of the law will be given them,” said the daily report on Camp Cobb in the Star newspaper on July 15, 1898.

Although rumors had been flying that the men of the 4th would soon be sent to “Porto Rico” (the common spelling then) and perhaps to occupy Cuba, it seemed that their main battle here—besides the heat—was between the devil on one shoulder and the angel on the other.

The men were paid on the 11th, and the Star reported on the 12th that “as a result of pay day, the number in the guardhouse is considerably increased, and guards have been stationed at several points throughout the city on the lookout for those who are imbibing too freely. Several in the guardhouse also show signs of having been in an engagement.”

The same edition of the Star mentioned the YMCA tent at Camp Cobb was packed nightly with crowds addressed by local ministers, and many men made public professions of faith. A good portion of their pay was sent to families at home.

Meanwhile, the young men of Fredericksburg joined Company K, and were training about 60 miles away at Camp Alger in Fairfax County as part of the U.S. Volunteers 3rd Regiment. They wrote frequent letters home that were published in the newspaper and revealed that their stay was less pleasant than that of the men of the 4th.

C. O’Conor Goolrick reported it was “one of the most deserted and monotonous places that it was ever the misfortune of anyone to encounter.” Life wasn’t easy, he said, unless you thought it was easy to “drill two or three times a day in the broiling hot sun while mouthfuls of dust are swallowed at every step” and “stray grains find their way with blinding effect into one’s eyes.” It was true that the food was decent, “but even a soldier could relish his dinner to a greater degree if he had knives and forks to eat with instead of his fingers.”

The Camp Alger soldiers sought enjoyment by “blockade running” at night, meaning escaping the guards posted at the perimeter of the camp, running off for several days of fun, and then returning for several more days in the guardhouse, or in this case, the guard tent. Meanwhile, Capt. M.B. Rowe of Fredericksburg continued to travel around the countryside recruiting more men for the 3rd and delivering them to Camp Alger. Shiloh Baptist (New Site) became a recruiting center for Black troops. These men, born after the horrors of the Civil War, also expressed longing to go off to “Porto Rico” and fight. But they may have just wanted to escape Camp Alger.

By the middle of July, the city of Santiago, Cuba, had fallen to American forces and the officers of Camp Cobb held a grand ball at the Opera House, attended by ladies from far and wide. The Star listed the names of about 40 female attendees and detailed what each wore (such as white organdie). The Immunes, on the other hand, had their passes to town canceled as they prepared to leave for “Porto Rico” at a moment’s notice. Soldiers in Santiago were being stricken by the thousands with yellow fever.

In the end, an armistice was signed Aug. 12, and neither the Immunes nor the men choking on dust in Fairfax County ever went to “Porto Rico.” Compared to the Civil War, this war was indeed “splendid” for Fredericksburg. Their sons escaped harm and the town made a lot of money instead of being destroyed. There was also a unifying effect on the nation. Soldiers at Camp Alger mentioned the pride of watching a parade of men marching four abreast, 2 miles long, with “Old Glory” flying, and about 2,000 citizens in Fredericksburg turned out to watch the Immunes drill. The newspaper rejoiced that now there was “no North and South, East or West, but one united country.”

Wendy Migdal is a freelance writer in Fredericksburg.

On Sept. 4, 1868, R.F. Lunsford of Stafford County caught a terrapin and carved his initials and the date on its back. He later moved to a different part of the county. On July 13, 1898, the Free Lance reported that he found the same terrapin with the carvings “as distinct as when they were marked.” Perhaps, the turtle remembered the violence of the Civil War (or at least of the knife). Perhaps, as he entered his retirement home in Lunsford’s garden, hopefully to be fed treats, he reflected that life in his corner of the world was a little more peaceful.

At least 85 people have been hospitalized in a salmonella outbreak linked to onions, the Centers for Disease Control and Prevention said.

Riverside estate with recreation galore in Tappahannock listed at $924,900

The estate at 355 Daingerfield Road in Tappahannock is now for sale. The four-bedroom, 2.5-bath home on 1.27 acres is listed at $924,900 with Alex Belcher of Belcher Real Estate LLC.

Members of the Spotsylvania American Legion Riders, Chapter 320, recently embarked on a ride to the Hatton Ferry.

A guide to understanding olive oil

There’s a reason olive oil is a favorite eating and cooking oil.

Made from the oil of pressed olives, it’s a relatively healthy fat, full of antioxidants and high in monounsaturated fatty acids, which help lower your “bad” LDL cholesterol.

Toxic chemicals may be in fast food wrappers and take-out containers, report says

The report, released Thursday, is not the first to find such chemicals in food packaging. See which companies' packaging likely contain PFAS.

While members of the 4th U.S. Volunteer Infantry Regiment trained locally during the Spanish American War, young men of Fredericksburg joined Company K and trained in Fairfax County as part of the 3rd U.S. Volunteer Regiment. The Central Rappahannock Heritage Center has restored a color military register listing those men. The unrestored document is seen below.