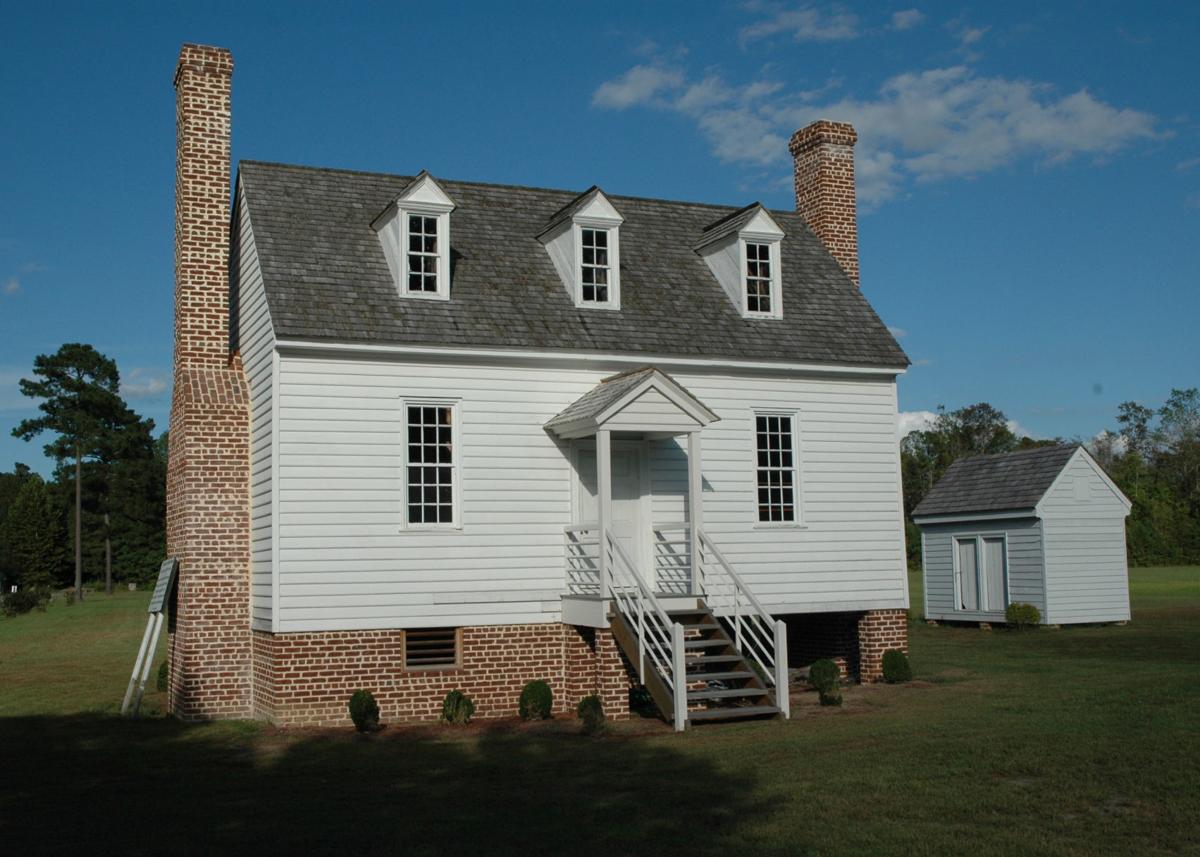 The restored Rebecca Vaughan House, now in Courtland, was the last house in which any white person was killed during the rebellion. Plans are underway to make it a museum and eventually open it to the public. 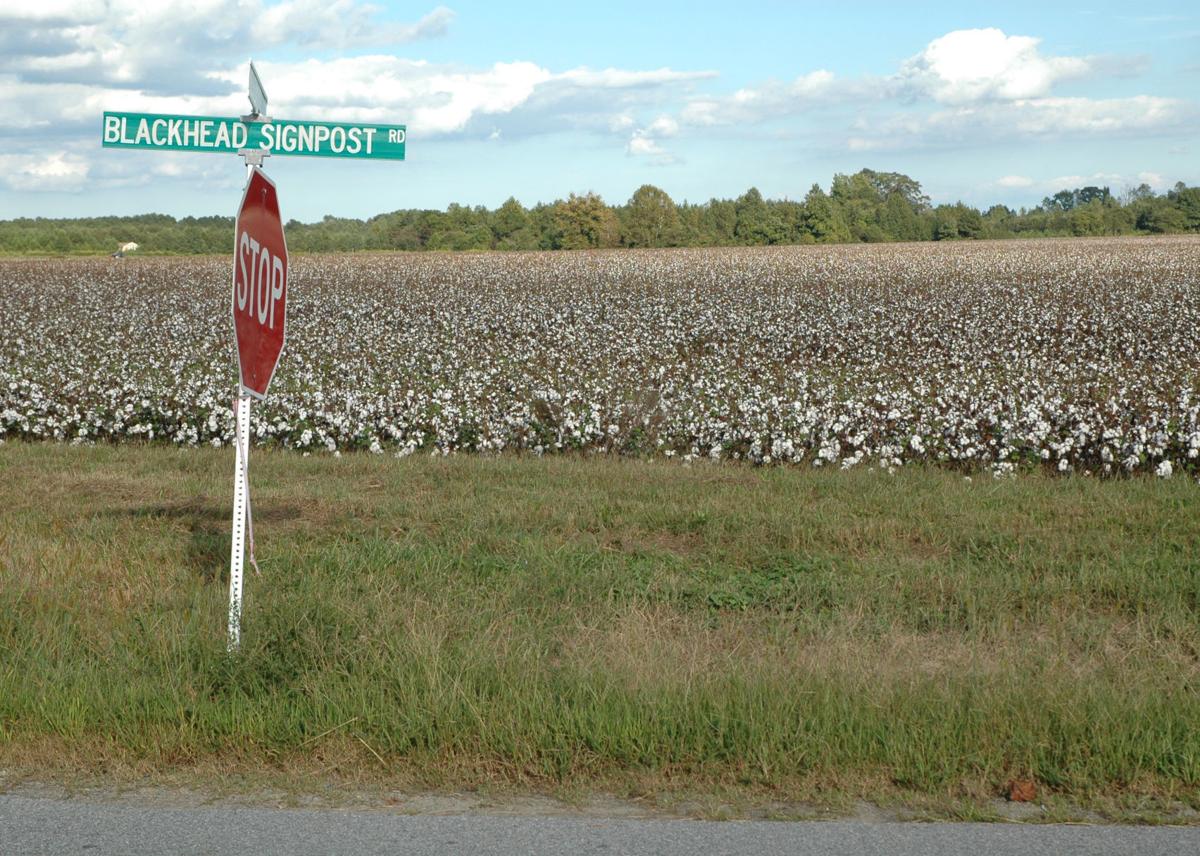 A macabre reminder of the rebellion, this road gets its name from a slave who was decapitated and had his head put on a pike as a warning against revolts. 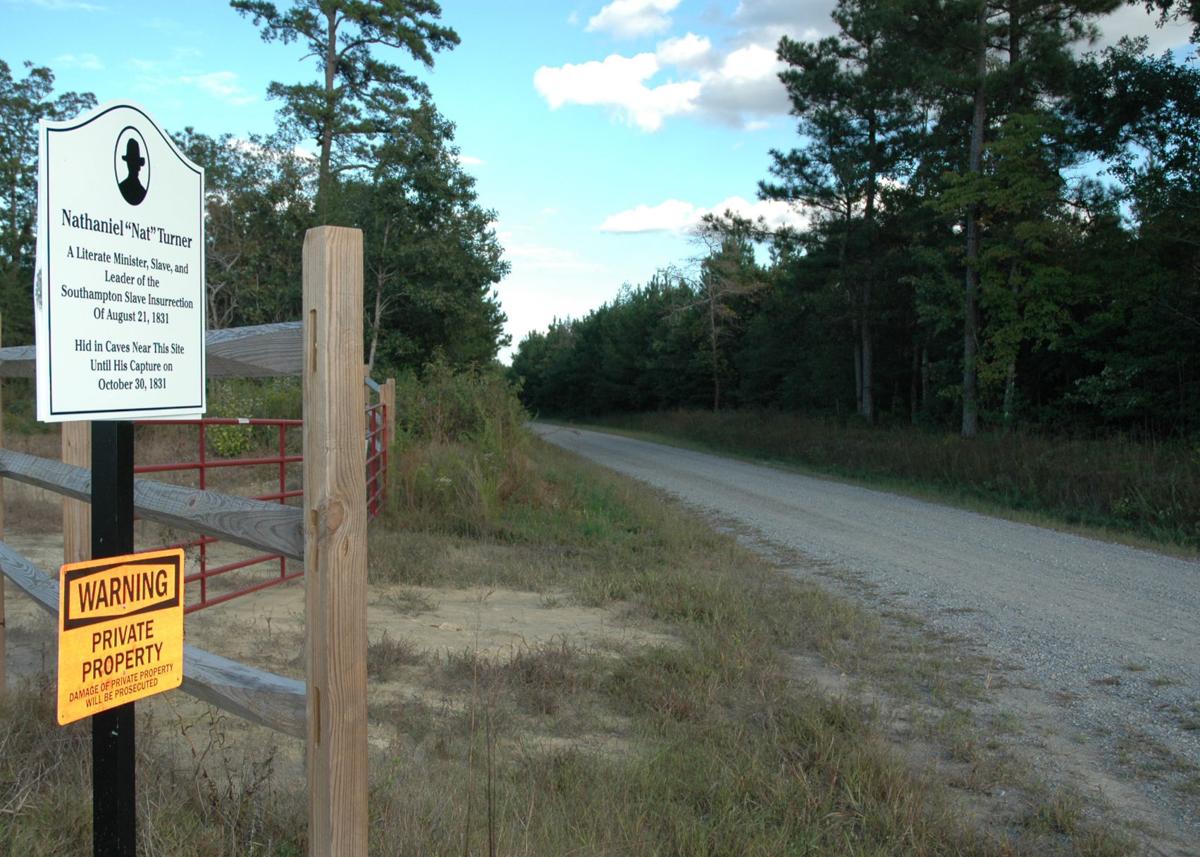 There are few markers along the Nat Turner Trail in Southampton County. This one is privately owned.

By J. STEVEN MOORE FOR THE FREE LANCE–STAR

History gets personal when you are talking about the biggest slave uprising in American history. Very personal.

That history, as told by a descendant of a plantation owner and slaveholder who narrowly escaped death more than a century and a half ago, is oftentimes as near as a person’s skin, as it turns out.

“My father always tried to impress on my brothers and I that it was only because of the independent action of slaves on 23 August 1831 that we’re here,” Francis said.

History is complicated, too, and does not always conform easily to clichés.

That Nathaniel Francis survived at all was thanks to a 10-year-old slave who warned him of Nat Turner’s impending approach, giving him time to escape. Others were less fortunate. A brother, Salathial, who lived only about three miles away, was hacked to death.

That is the way it went in the largest and bloodiest slave uprising in our nation’s history. People met death—or survived—by the merest of circumstances, both white and black.

Though nearly 200 years have come and gone since then, recollections of those events remain fierce for some—“still has heat in it,” as Francis put it—and not always for the obvious reasons, either. Even before the tour I recently joined started, I experienced this firsthand.

In the records room of the Southampton County courthouse, surrounded by stacks of thick deed books and wills, stand two small display cases filled with memorabilia about Nat Turner’s Rebellion. Two items there quickly stand out: A 1967 Time magazine cover featuring author William Styron, whose novel, “The Confessions of Nat Turner,” won the Pulitzer Prize that year, and a Life magazine, also with Styron’s picture. Curiously, both magazines have Post-it notes covering Styron’s face. Why? I asked.

“I have a beef with Styron, his lack of research,” said Francis, who is the clerk of the Circuit Court. “Nat Turner killed one person, a white woman. So, Styron hypothesized that Nat Turner lusted after a white woman.”

Turner was, in fact, married to a fellow slave named Cherry. According to Francis, Styron spent only half a day researching Turner at the courthouse. The problem for Francis is not that Styron told Nat Turner’s story, but rather, that he told it inaccurately.

“There is no factual basis for this,” Francis said. “Correcting things that have been put out there is the biggest problem I face.”

Perhaps the biggest misconception is about Turner and what motivated him. Far from being the wide-eyed, bloodthirsty fanatic of lore, Turner was an articulate, charismatic, self-styled prophet who took inspiration from the pages of the Bible, which he had learned to read at an early age. He devoted himself to fasting and prayer, and saw events such as an eclipse that occurred several months before the rebellion as signs from heaven. He was young, being only 30 in 1831.

Although whites loathed and feared Turner, they could not, according to Francis, understand at the time how a slave could, in fact, be so smart. For that reason, following Turner’s execution, they removed his skull and sent it to a medical college in Illinois for examination.

All these details and more come out in the course of the five-hour tour. Having spent more than 20 years researching it, Francis likes to tell the story of his ancestor and the man who nearly killed him and he likes to tell it straight. No sugarcoating.

It would be hard to do so even if he tried. Nearly 60 whites were killed during the two-day rebellion, including 19 women and 24 children, most by being hacked to death in their homes. One person was bludgeoned with a fence rail. Perhaps as many as 40 blacks, many who had nothing to do with the uprising, were lynched by vengeful local militias sent to quell the revolt.

Yet, Francis manages to tell the story deftly, all the while avoiding the pitfalls that characterize so much of the country’s current discourse on politics and race. Despite his personal connection to the story, he betrays no hidden agenda or emotion, neither trying to lay a guilt trip nor portray the antebellum South with any “Gone with the Wind”-like nostalgia or romanticism. It is history, clear-eyed and unvarnished. Participants, black and white, agreed.

“This is outstanding,” said Mae Breckenridge–Haywood, a retired librarian from Portsmouth and the current president of the Portsmouth African–American Historical Society. “I got a lot more details. [Francis] knew the facts. Black history is not beautiful and it needs to be told.”

Jim Wills and his wife traveled from Annapolis, Md., for the tour, a three and a half-hour drive one way, but one that was worth the time spent to get there.

“Going on the Rick Francis-conducted tour gives an even-handed, objective, fact-based account of that historic event which still echoes down through time,” Wills said. “Rick gives insight into the minds of the participants, both black and white.”

Following the rebellion, Turner managed to evade capture and hide for more than two months in nearby swamp called Cabin Pond, not an easy feat with so many people scouring the countryside looking for him, but he had help.

As Francis related that part of the story during the tour, someone on our bus called out: “My people helped to feed him.”

Following his capture and trial, Nat Turner was hanged Nov. 11, 1831, in Virginia’s Jerusalem (now Courtland), near where the tour begins, but the story does not end there.

The rebellion he led continues to attract attention and questions from visitors from around the world, according to Francis, who said he receives at least one query a week on Turner at the courthouse. Although local residents comprise about half his tour groups, he has had visitors from as far away as Canada, Britain and even Japan, he said.

As the sun lowered in the sky at day’s end and the last cars from our tour left the courthouse to return home, a final comment was shared by Leroy Hardy Jr., a lifelong resident of Southampton County and a member of the local Nottoway Indian tribe. It was the tribe’s members who helped Turner avoid capture, Hardy explained.

Asked about his interest in Turner, Hardy said, “Because of being here and being part of our history. It’s not something someone just told me about or something I’ve read about; I’m connected to it.”

The Nat Turner bus tour departs the Southampton County courthouse about four times a year, but additional tours can be arranged by request. The bus seats 55 people. The cost is $45 per person and includes lunch at a local church. The tour retraces the 23-mile route Turner took between Aug. 21–23, 1831.

While future plans call for a GPS-guided driving tour and museum, for now, the bus tour remains the best bet for hearing the story told completely and fairly. Anyone trying to do this on his own will encounter a bewildering maze of back roads that to the unfamiliar look virtually alike and the near total absence of identifiable landmarks (only four of the 16 houses Turner attacked still stand, for instance).

J. Steven Moore is a freelance writer in Caroline County.

Could this be the future of sustainable housing?

Could this be the future of sustainable housing?

When my doctor told me my blood pressure and cholesterol are too high, I jokingly told him, “That’s a problem, because my three favorite food …

The hard seltzer craze has come to an end

The once unstoppable growth of hard seltzer has gone flat.

Bill Reed and his wife noticed this strange offshoot growing out of a shrub in their front yard.

Junior Emma Shropshire and senior Emily Broyles of Courtland High School Future Farmers of America have earned their state degree, the highest award a state can bestow on a student.

The Woman’s Club of Fredericksburg has awarded a scholarship to Kyla Bayton, a graduate of James Monroe High School.

SUNRISE, SUNSET>> Sometimes the show is behind you

Anne Hupka of Stafford County recently captured a photo of anticrepuscular rays from her family's home on the Potomac Creek.

Saying Grace: The real prize is greater than a crown

After competing in pageants for nearly 20 years, I decided it was time to hang up my proverbial high heels. And while I gained many benefits t…

Four Stafford High School drafting students volunteered their skills to draw the house plans for a Habitat For Humanity home in Caroline County.

Ask the Builder: Want your room addition to be perfect? Plan early and exhaustively

In recent weeks I have done quite a few telephone consultation calls. One in particular stood out, and it should be of particular interest to you if you’re planning on remodeling a kitchen or building a new home, a large room addition or even a humble outdoor shed.

Fredericksburg shop plans events on July 30 to bring more awareness to the issue.

The restored Rebecca Vaughan House, now in Courtland, was the last house in which any white person was killed during the rebellion. Plans are underway to make it a museum and eventually open it to the public.

A macabre reminder of the rebellion, this road gets its name from a slave who was decapitated and had his head put on a pike as a warning against revolts.

There are few markers along the Nat Turner Trail in Southampton County. This one is privately owned.