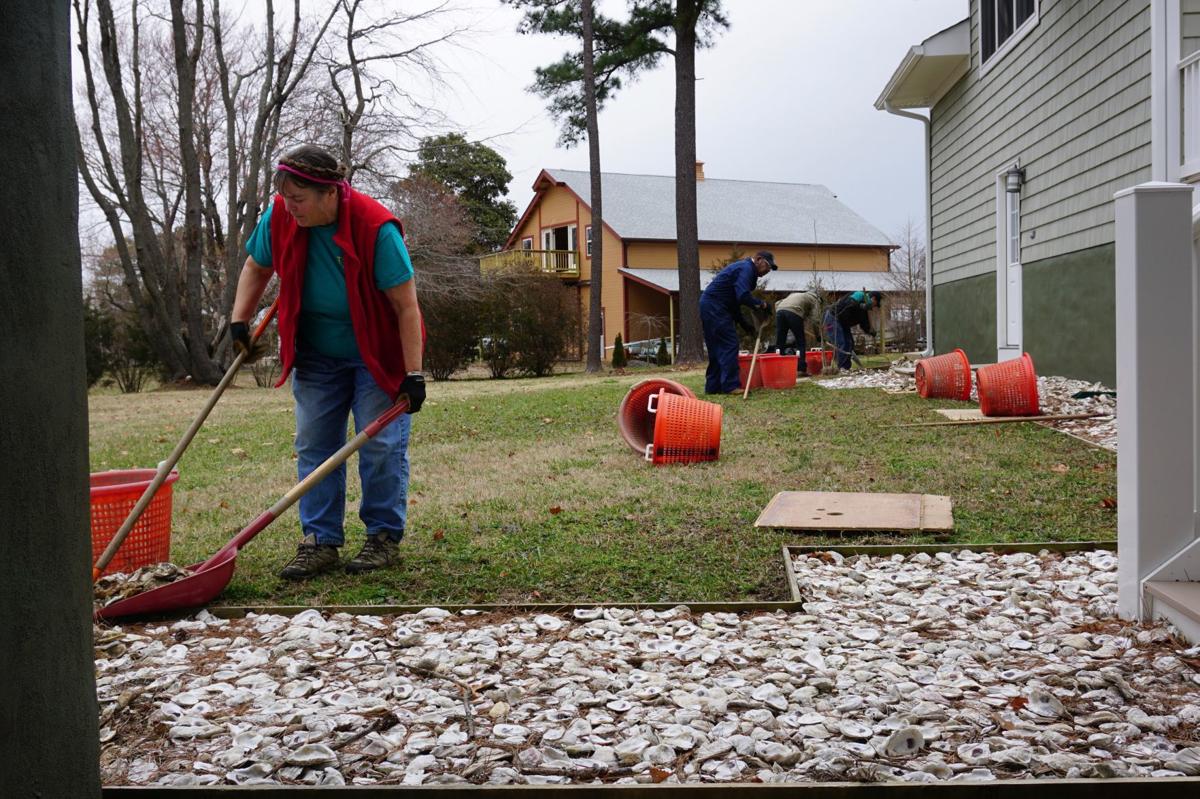 Tidewater Oyster Gardeners Association member Barbara Keeler scoops up oyster shells from around the Duffy home in Kilmarnock. The shells were donated to a nearby oyster preserve and will be used to raise new crops of oysters. 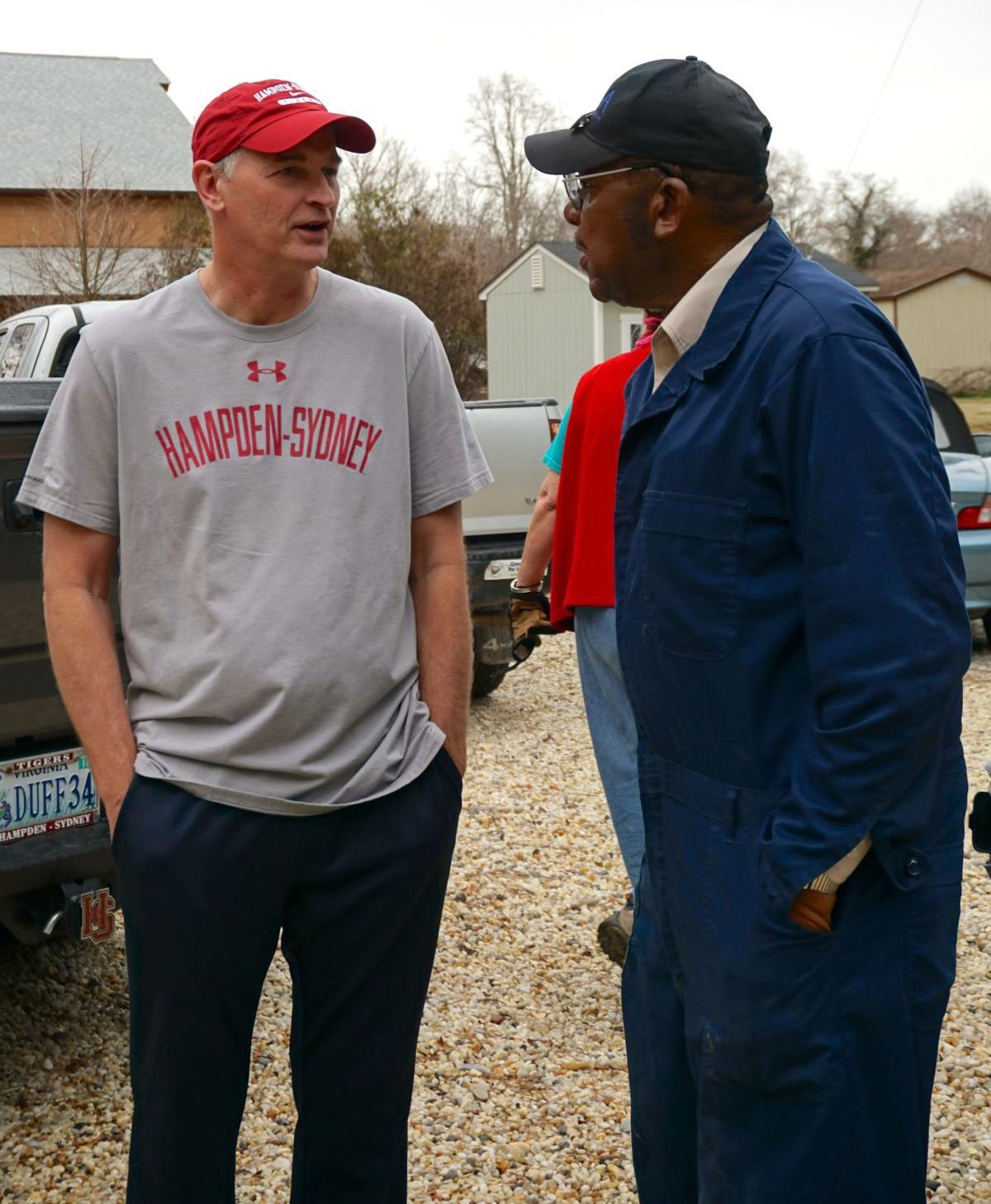 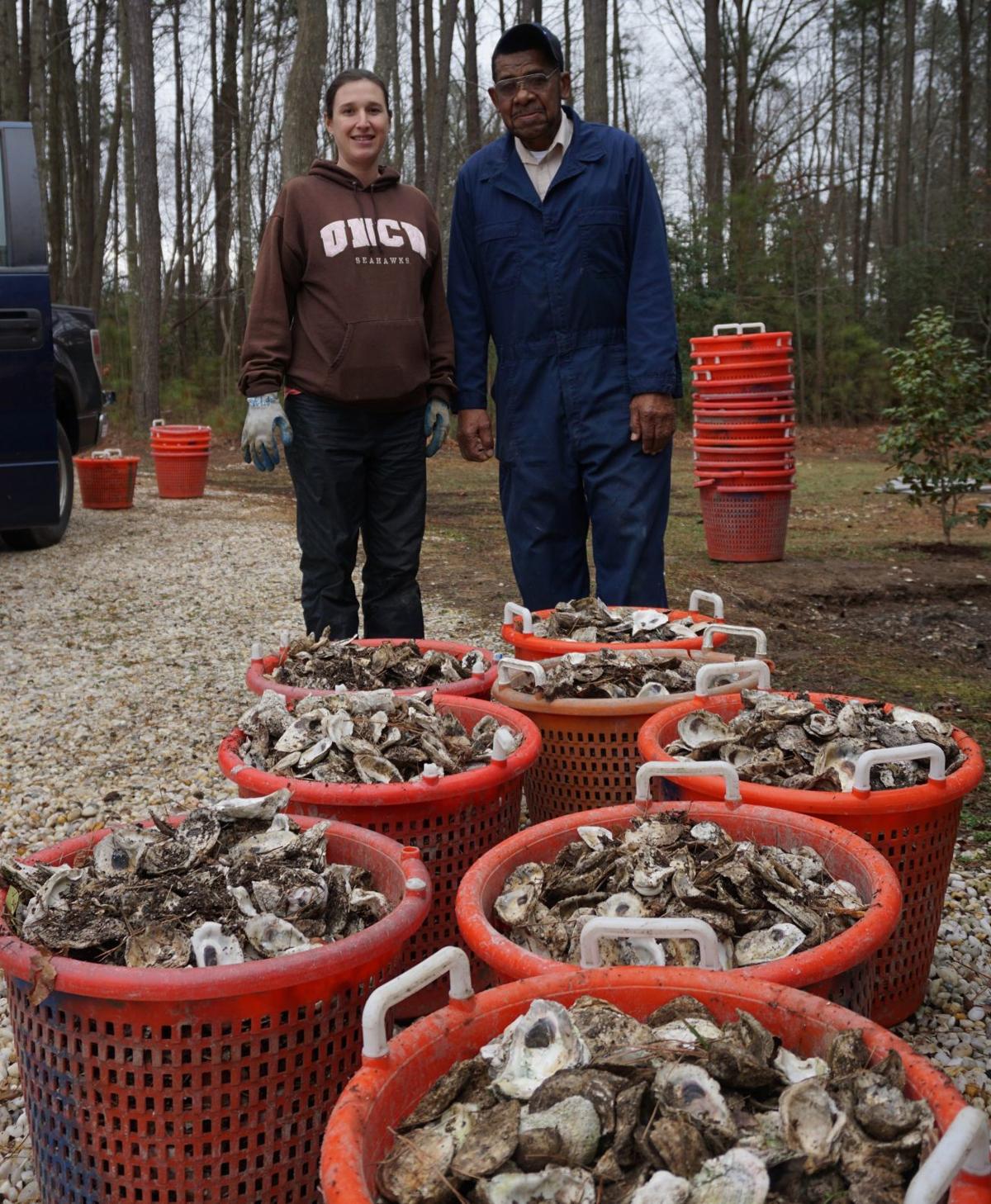 Madison Boyd and Jackie Shannon pose with oyster shells removed from around a house in Kilmarnock. 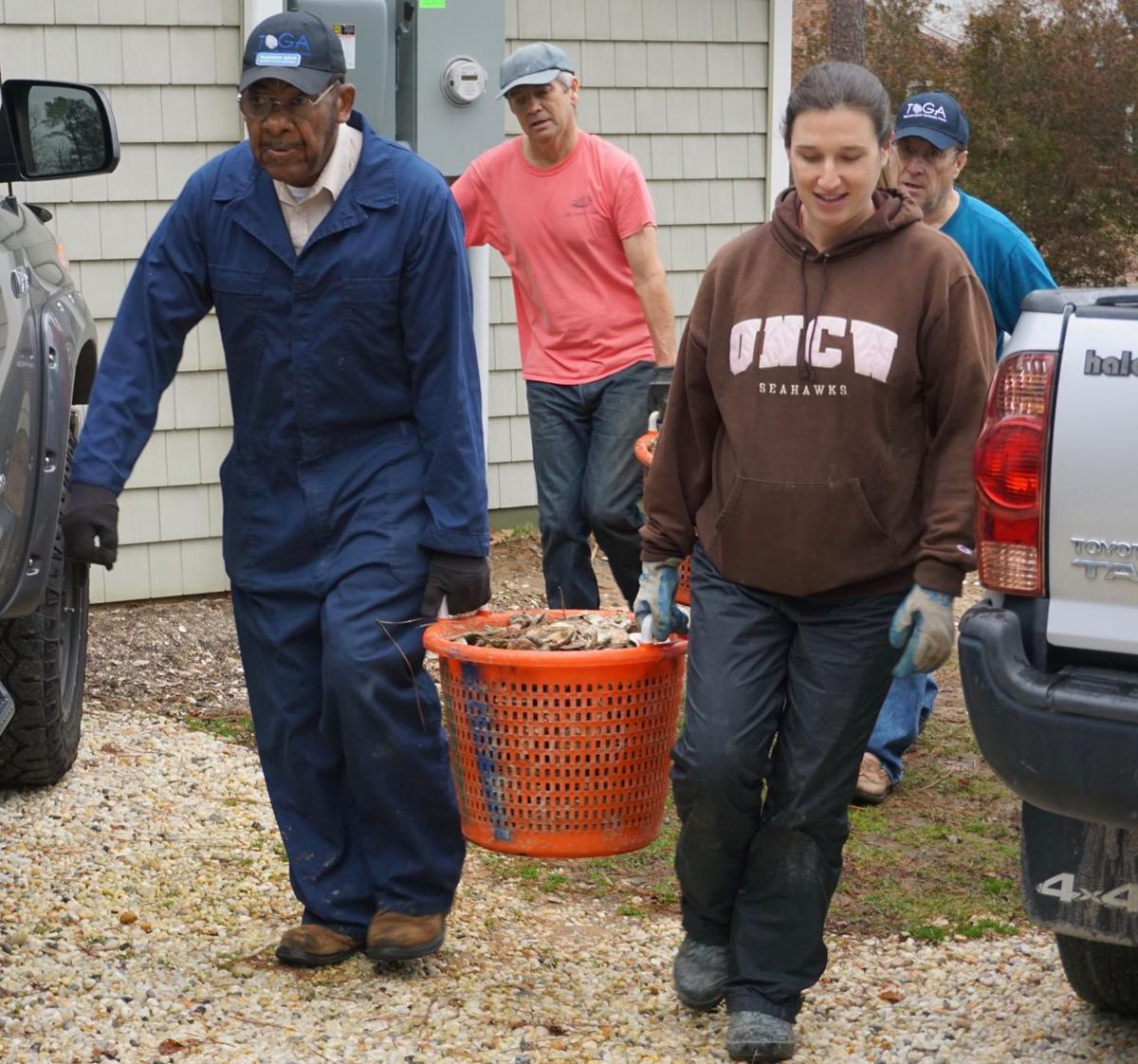 By PAMELA A. D’ANGELO FOR THE FREE LANCE–STAR

Virginia is a major producer of farmed oysters, touting itself as the “Oyster Capital of the East Coast.”

But because the oyster population remains at historic lows, the state and aquaculture companies struggle to keep up with the amount of old shells needed to continue producing more oysters.

Oyster larvae attach themselves to a hard surface, preferably oyster shells, where they grow their own shell and become what’s called spat. Farmers use empty shells to help raise the spat in river bottoms or cages until they are ready for harvesting.

The state has spent millions to dig up fossilized shells and to experiment with various substitutes such as granite and concrete to build oyster sanctuaries. During the past few years, localities, environmental organizations and universities have set up oyster recycling drop-offs throughout the state.

If you can find it, shell sells for about $3 to $4 a bushel, an expensive investment when your project is to teach aquaculture. So when a Richmond couple contacted the Chesapeake Bay Foundation and the Tidewater Oyster Gardeners Association about some unwanted oyster shells around the foundation of their new house in the Northern Neck, more than a dozen volunteers descended on the property last week to get them.

It was for an important cause: Educating the Northern Neck’s youngest future oyster farmers.

“We’re building an educational reef on four acres of ground,” explained Madison Boyd, a TOGA member who coordinates the project on a creek in Kilmarnock. “We work with the Boys and Girls Clubs, teach them how to grow oysters, go over oyster aquaculture with them once a month throughout the year.”

The 83-year-old Boyd was once a watermen, working menhaden boats and fishing crabs and oysters.

Other members of the group that showed up Friday were just as formidable. Retirees, master oyster gardeners, some local, some who drove in from as far as Virginia Beach and Richmond. One was six months pregnant.

As morning turned to afternoon, they raked, shoveled and hauled several thousand pounds of shells. There was talk of hot soaks and Motrin.

Jeff Duffy and his wife Lisa bought the property last year and will be moving down from Richmond when he retires from his corporate construction management position.

The house was built in 2010 and the former owner had put down several inches of shell as part of a French drain system around the foundation. People are often unaware of the value of oyster shell in efforts to restore the population, so they carry on a tradition of using shell on driveways, foundations, in gardens and as decoration around mailboxes.

“We liked the oyster shells around the house, but after about a month or two, we decided there’s probably a better use for them,” said Jeff Duffy, who came down for the oyster removal. “We wanted to do something for the local people.”

Duffy is already growing his own oysters at the end of his pier on Dividing Creek.

This is the first time both organizations have had a homeowners donate shell from their yard.

“There aren’t enough shells to do the restoration work that needs to be done,” said Jackie Shannon, CBF’s oyster restoration manager. “We’re getting more than enough shells for our program on an annual basis, so opportunities like this where we can share shells with another conservation organization to keep them in that locality is a really great win, win.”

The group hauled out 176 bushels on Friday and plans to return for the rest. Shannon estimated in all there will be about 300 bushels.

Two adults were shot inside their Fredericksburg apartment Wednesday morning by an intruder, police said.

A Stafford man was arrested after a surveillance camera caught him trying to break into another county resident’s home late Saturday, police said.

Locust Grove man cleared of one charge, convicted of others in Spotsylvania gun incident

A Locust Grove man was cleared Thursday of a robbery charge that carried the possibility of a life sentence.

A man who shot his neighbor in her lower leg last year during an argument about gun laws was ordered Friday to serve 10 years in prison.

Tidewater Oyster Gardeners Association member Barbara Keeler scoops up oyster shells from around the Duffy home in Kilmarnock. The shells were donated to a nearby oyster preserve and will be used to raise new crops of oysters.

Madison Boyd and Jackie Shannon pose with oyster shells removed from around a house in Kilmarnock.