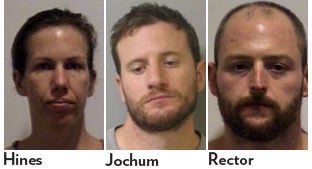 Three people were arrested Wednesday after an early morning raid at a home outside Colonial Beach in which a methamphetamine operation was found, authorities said.

Angela D. Hines, 41, and Dustin T. Rector, 34, both of Colonial Beach, and Peter W. Jochum, 34, of Montross were all charged with manufacturing methamphetamine and conspiracy. All three are placed in the Northern Neck Regional Jail.

Balderson said county detectives had been gathering information for about four months before arranging the raid. All three suspects were in the home, along with a meth lab they were allegedly operating.

The house was deemed uninhabitable after the raid, Balderson said.

Rector was already wanted for failing to report to jail to serve time for an unrelated offense, authorities said. Balderson said the investigation is ongoing and more charges are likely.