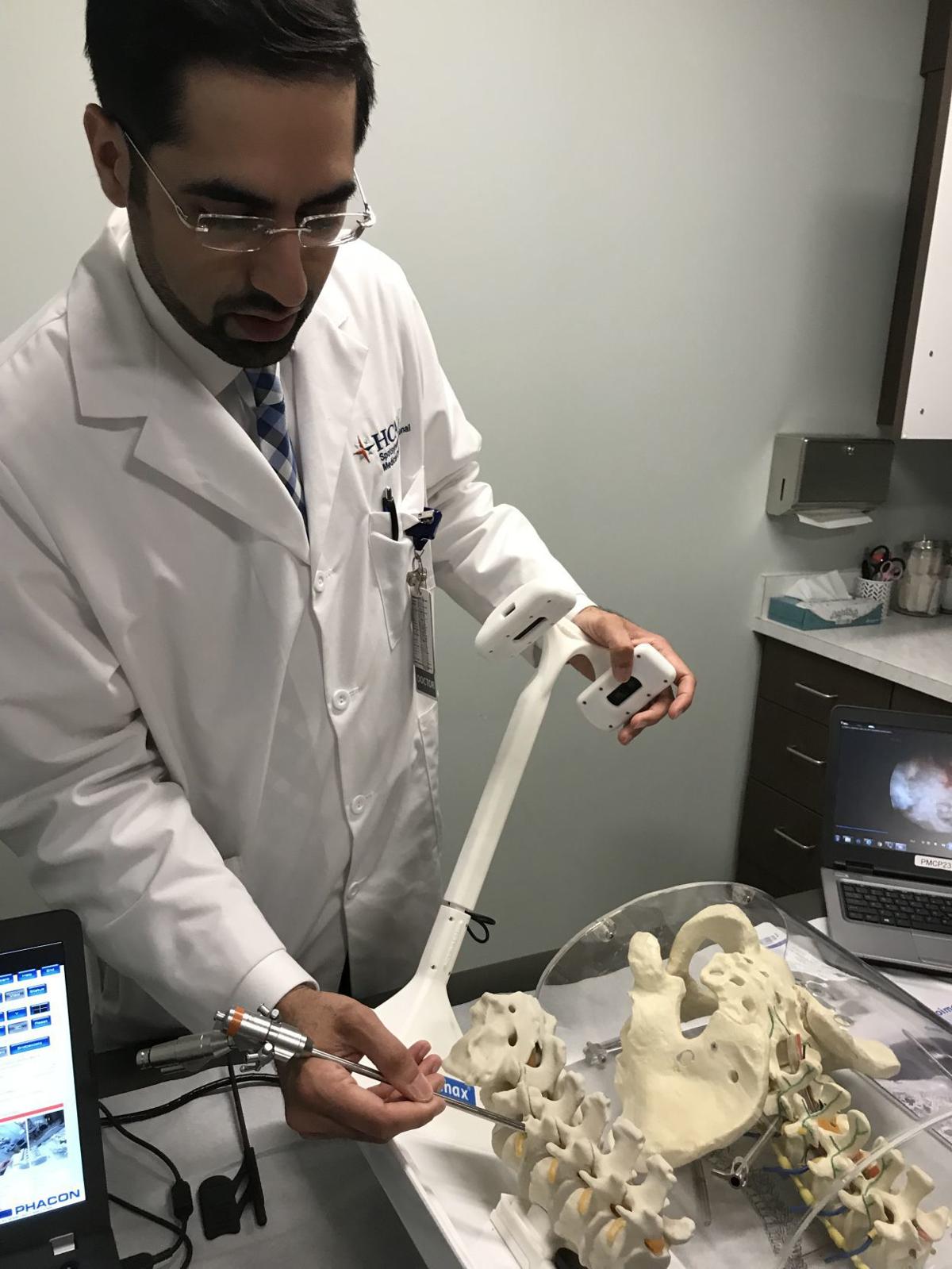 Dr. Zahir demonstrates how a small camera can aid in spinal surgery. 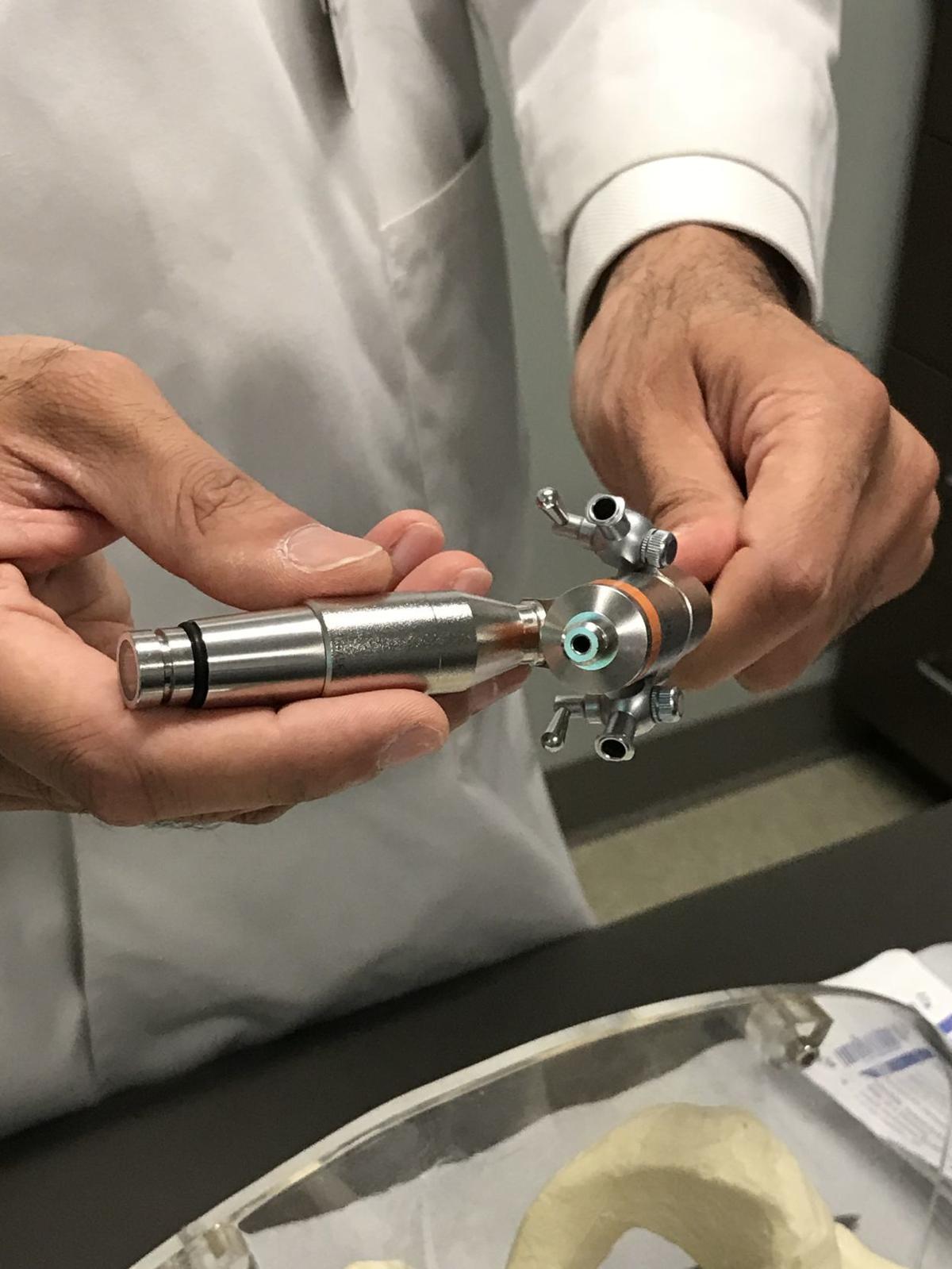 Bone spurs or fragments are pulled out through the small blue opening in this tool.

For years, surgeons have used small scopes—not much thicker than a pencil—to repair problem areas inside the knees and shoulders and to remove gallbladders.

Through a small incision, doctors insert a camera and the necessary tools instead of performing a traditional “open surgery” that cuts across skin and muscle. This minimally invasive surgery means less pain and blood loss for patients and more savings for insurance companies because of shorter hospital stays.

But the idea of doing such an operation on the complicated structure that is the spine has been another matter altogether. In orthopedic circles, the spine seemed the final frontier—until the Centers for Medicare and Medicaid Services approved coverage of the operations last year, and surgeons started getting the necessary training.

Dr. Usman Zahir, a surgeon with Premier Orthopedics of Virginia, became the first doctor in Virginia to perform a laminectomy, a procedure to remove bone pressing against a nerve in the spine. Since that initial endoscopic procedure in October at Spotsylvania Regional Medical Center, he’s done 20 others to help repair the wear-and-tear of stenosis or to fix a herniated disc caused by a person lifting something too heavy.

Zahir is the only surgeon in the Fredericksburg area performing what he describes as a highly technical procedure.

“Tools like this haven’t really been used in the spine much for a variety of reasons,” said Zahir, who got his medical training at the University of Maryland and later operated at Medstar St. Mary’s Hospital and Georgetown University Hospital. “But now with some of the new technologies that are available, we can do this safely.”

Zahir recently provided a demonstration of endoscopic surgery using plastic models of a patch of skin and the individual vertebrae of the spine.

After making an incision that’s smaller than a dime into the skin, the surgeon can insert a scope that creates the tunnel through which a small camera can be passed, along with a device that can shave away bone spurs or clip the bulging part of a disc.

Zahir clearly was excited by the chance to show what he does, enthusiastically declaring, “Yeah, that’s a good question,” whenever he was asked for more details.

Ryan Moody, a clinical specialist with joimax Inc., the California company that manufactures scopes for spine surgery, said Zahir has a “real enthusiasm” for these types of procedures.

“He’s really bought into this and was adamant about getting as much training as he could to come up to speed with this new technology,” Moody said. “I deal with doctors all over the country, and he’s one who has really committed to the system and to devoting himself to the technique.”

Because minimally invasive surgery is so technical, it “requires significant training of the surgeon and the operating room staff,” according to the Society for Minimally Invasive Spine Surgery’s website.

Although the tools are tiny, the camera allows them to be blown up on a monitor, giving the surgeon a bigger, and clearer, view. In a video of the laminectomy procedure Zahir performed, the device that shaved off the bone spur whirred along as bone fragments filled the screen.

The debris resembled what might be seen in an Oklahoma town in the midst of a tornado, but it actually was so minute, it was siphoned out through a device with an opening smaller than that on a tube of toothpaste.

Repairing a herniated disc has been the most common procedure for Zahir’s endoscopic surgery, followed by stenosis, when arthritis builds up and presses on nerves, then laminectomy, when bone spurs poke into nerves and cause pain.

He’s quick to caution that not everyone with back problems needs spine surgery. At least 90 percent of such patients can see improvement with an anti-inflammatory, physical therapy, injection or even giving the problem area time to heal on its own, Zahir said.

He estimates that one of 10 patients he sees may need an operation and an even smaller number are candidates for the endoscopic treatment. It’s most effective for people with back and leg pain, whose sciatic nerves are being pinched, and not for those with complicated spinal conditions.

Many patients who have endoscopic spine surgery go home the same day and can return to work in a few weeks. Some have come back for a follow-up visit and have had so little pain that they can’t pinpoint where their incision was.

That leads the surgeon to point out another benefit of the less-invasive procedure.

“Health specialists and those in health policy feel like a lot of our procedures are very painful and can require patients to be on high doses of narcotics,” Zahir said, adding that once they start the medicine, it can be hard for them to stop it. “If we can start focusing on procedures that cause a little less pain, they don’t need to start that cycle, and it can offer other benefits as well.”

What to Know About Omicron

Dr. Zahir demonstrates how a small camera can aid in spinal surgery.

Bone spurs or fragments are pulled out through the small blue opening in this tool. 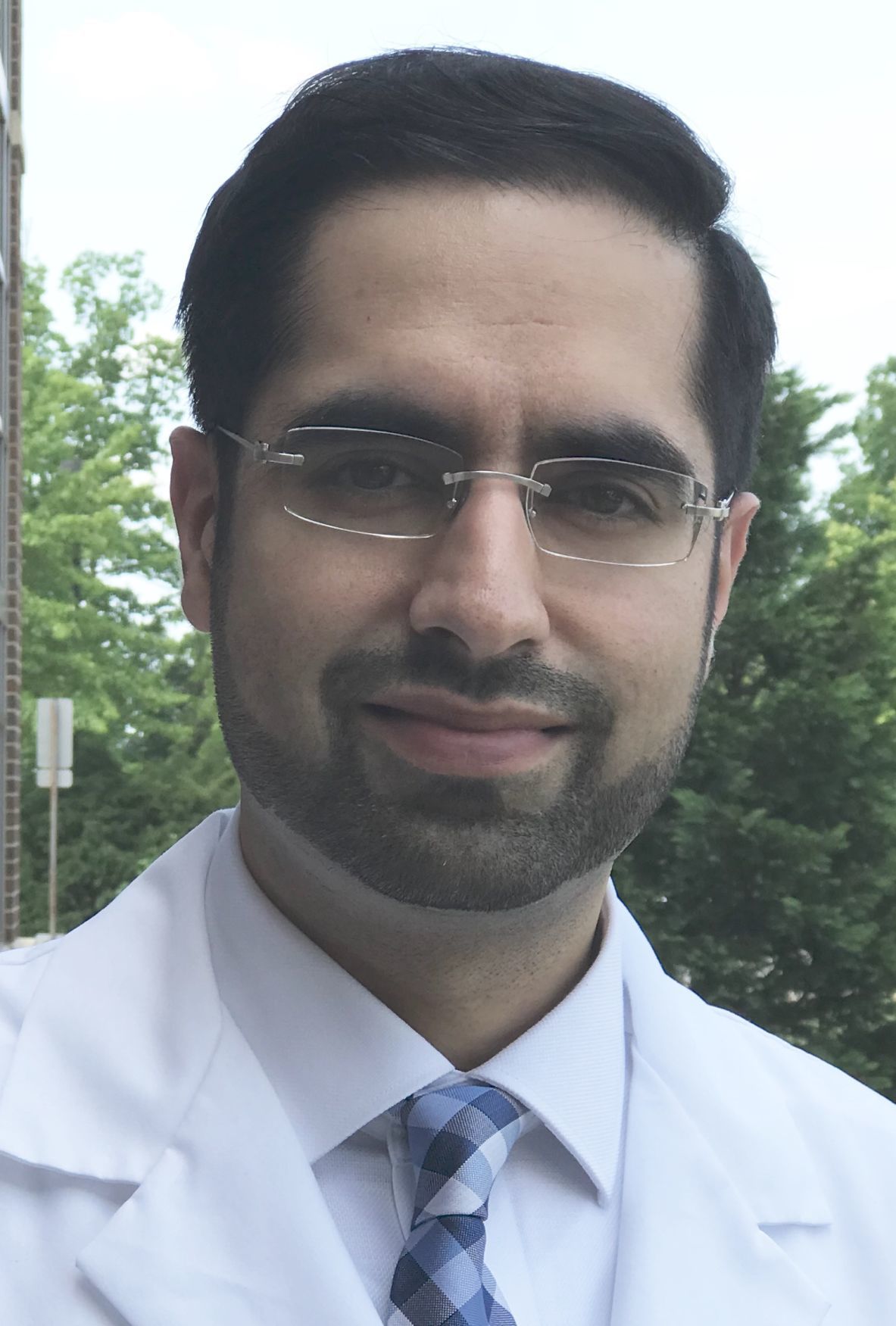