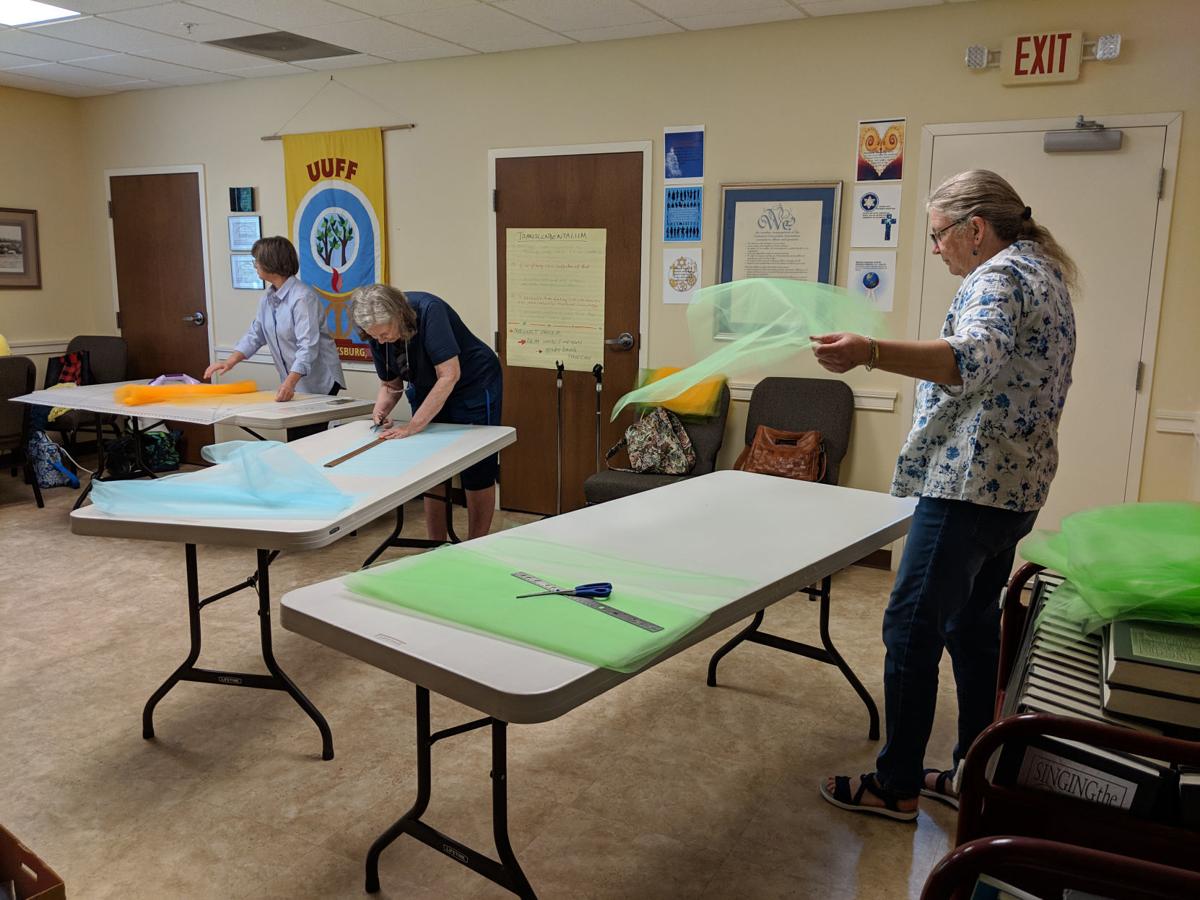 Volunteers at Unitarian Universalist Fellowship of Fredericksburg help create mesh bags that are given to some patrons at the Fredericksburg Farmers Market. 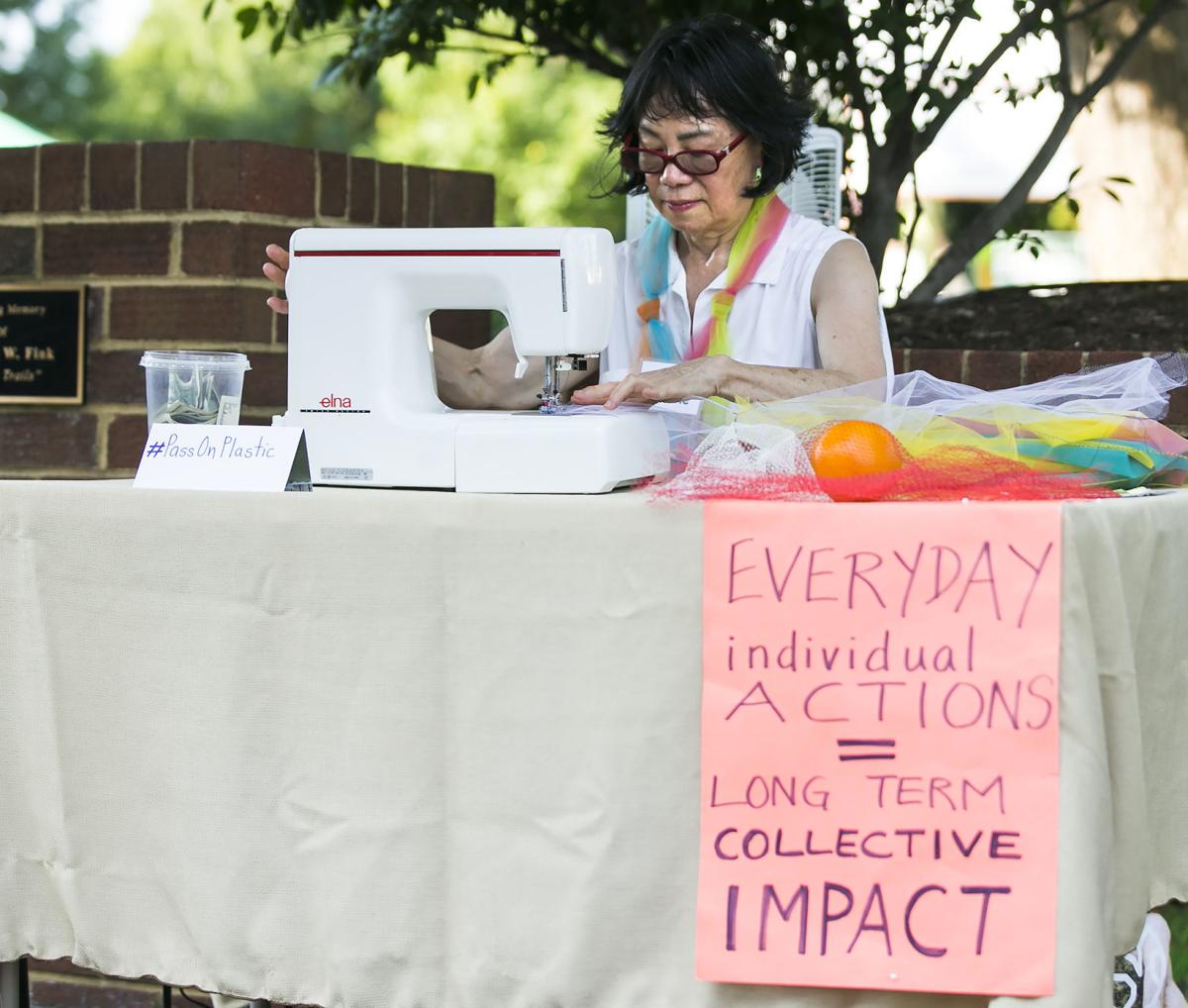 Paula Chow makes reusable produce bags at the Fredericksburg Farmers Market on Saturday, July 20, 2019. Chow received a $1,000 grant from Keep Virginia Beautiful in June to continue making the bags and to raise awareness of the impact plastic has on the environment.

By WENDY MIGDAL FOR THE FREE LANCE–STAR

Stroll through the Fredericksburg Farmers Market on a Saturday morning, and you’re likely to see a woman at a sewing machine, working with brightly colored netting.

Given the location, you might assume she’s selling craft items. But Paula Chow has a different agenda. She’s raising awareness for her Pass on Plastic campaign, aimed at persuading market patrons to opt for reusable bags rather than the standard plastic ones.

Chow is starting out small.

“I would love to just make all of Fredericksburg plastic-free. But you have to be realistic,” she said. “So I decided to start with just the farmers market.”

Her original vision had been to set a goal for a plastic-free farmers market by 2021. Chow works with two vendors, Valdez Produce and C&T Produce, who were interested in helping her reach her goal.

One day a month, she brings between 100 and 200 nylon net bags to give away to customers who purchase from those two vendors. Chow buys the fabric with her own money and cuts and sews the bags with help from myriad volunteers, including Fredericksburg Food Cooperative members and members of the Unitarian Universalist Church.

She also stands on the corner and hands them out to customers walking past, asking for a donation to help fund the effort.

“People are very interested. We end up giving all the bags away and running out before the day is over,” she said. “Valdez said it increased his business.”

But there’s still a lot of education to be done, as the Food Co-op, which is operating a related campaign, has learned.

The co-op’s campaign is called “Bring One, Leave One,” and its approach is to accept people’s gently used fabric reusable bags—the kind that tend to tend to pile up in your house, because they’re often given away as promotional items—and hand them out to people who have forgotten their bags. Customers can then bring them back the next time they visit the market.

“I stood and watched people who took those bags,” Chow said after one Saturday at the market. “And about 4 out of 5 of them then went up to a vendor and pulled down several plastic bags to put vegetables in, and then put them inside the reusable bags.”

She also estimates that only about a quarter of the people she hands her bags to will bring them back the next week.

Her campaign received a shot in the arm recently, though, when she—through the local chapter of the Sierra Club—was awarded a $1,000 grant from Keep Virginia Beautiful to buy more fabric for her bags and create promotional signs.

Now she needs more volunteers to cut, sew and hand out the bags on the corner where, she admits, “I start to melt after an hour or so.”

At a recent educational event sponsored by the Food Co-op at the Presbyterian Church, several speakers stressed the need to reduce consumption of single-use plastic. Now that China has stopped buying the world’s recyclables, “an overflowing recycling bin is no longer a welcome sight,” said Diane Jones, recycling manager for the Rappahannock Regional Landfill.

“I went from making money [by selling our recyclables] to paying money,” Jones said.

The new focus from environmental activists is to put recycling last on the list of options for individuals who want to make a difference, after “refuse, reduce, reuse, repair, regift and recover.”

Reusing and reducing were the themes of other speakers at the co-op event. Some said they adopted personal goals of giving up plastic for Lent, or going plastic-free for a year. They offered creative solutions, including traveling with your own silverware and containers for restaurant leftovers.

Gloria Lloyd, a Food Co-op board member who said she’s found her purpose in life as a “bag lady,” shared other creative ways to make your own reusable bags, including using old T-shirts.

As the U.S. struggles to figure out what to do with its recyclables, Chow said one of the best things a consumer can do is to “pass on plastic.”

“If you’re committed, it can work,” she said.

If you're interested in helping with the Pass on Plastic campaign, email paulachow132@gmail.com, or visit sierraclub.org/virginia/rappahannock.

Volunteers at Unitarian Universalist Fellowship of Fredericksburg help create mesh bags that are given to some patrons at the Fredericksburg Farmers Market.

Paula Chow makes reusable produce bags at the Fredericksburg Farmers Market on Saturday, July 20, 2019. Chow received a $1,000 grant from Keep Virginia Beautiful in June to continue making the bags and to raise awareness of the impact plastic has on the environment.