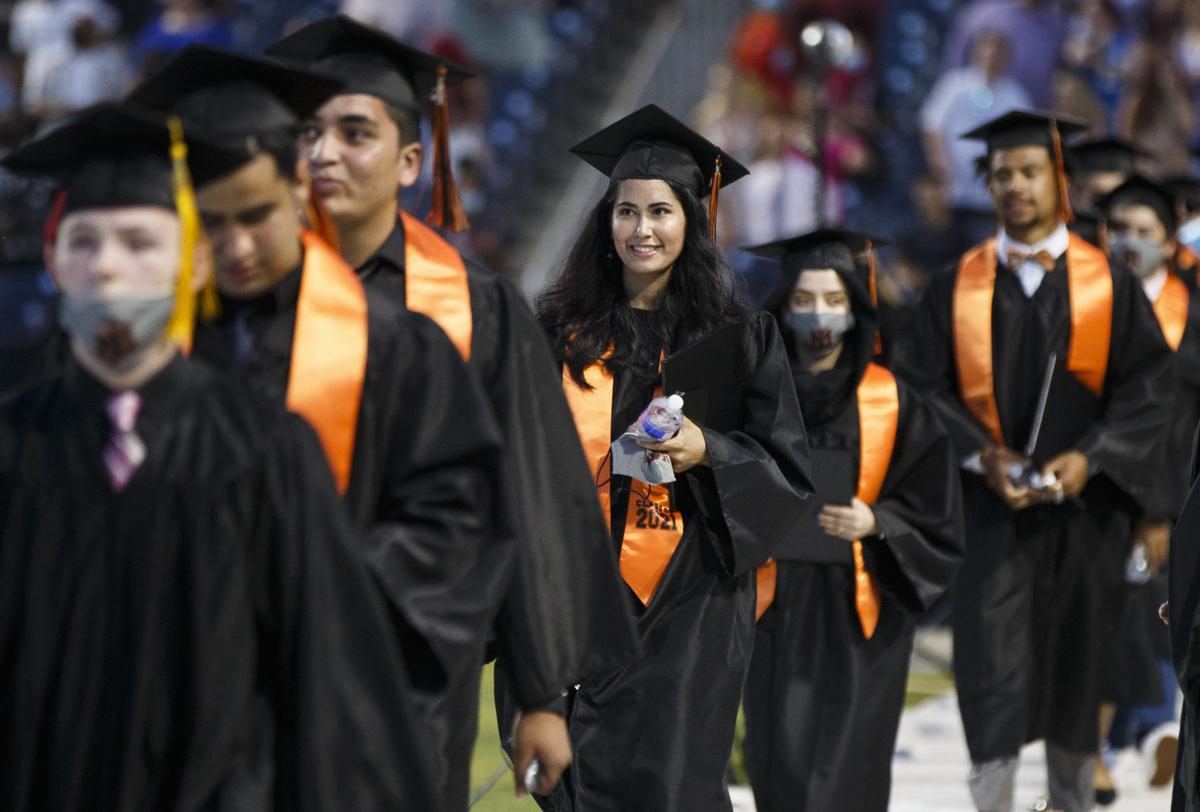 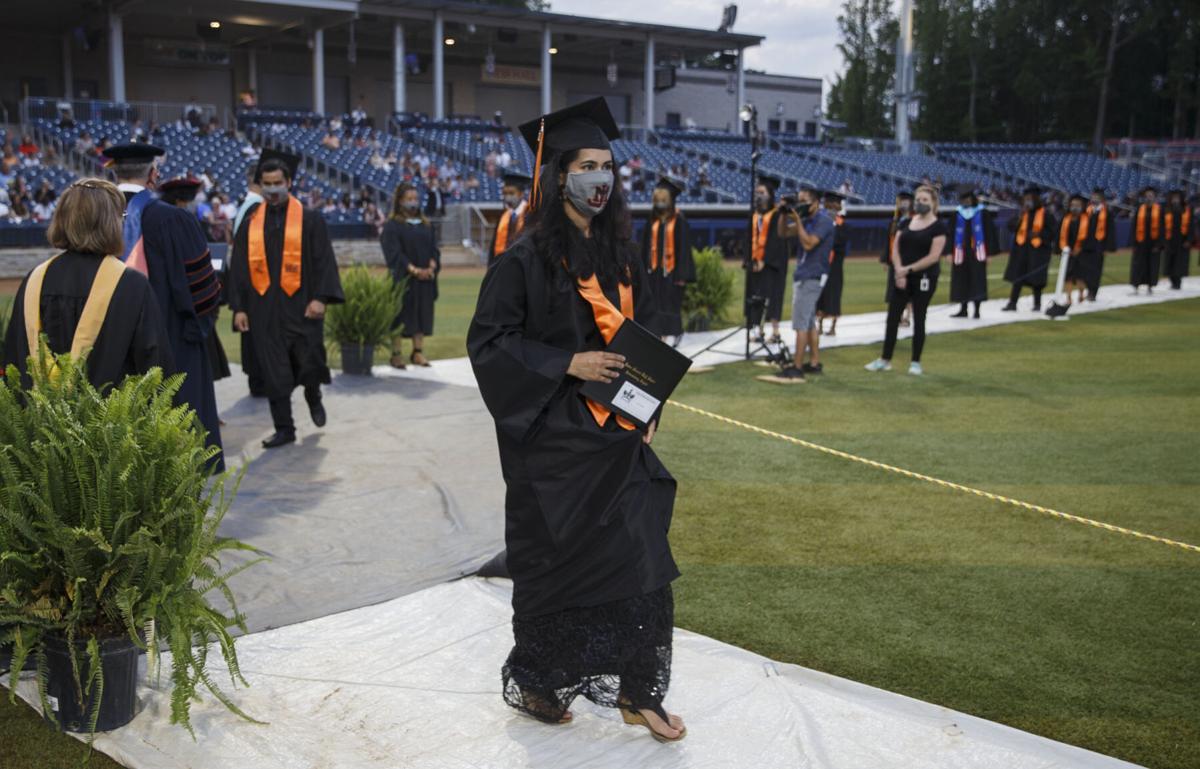 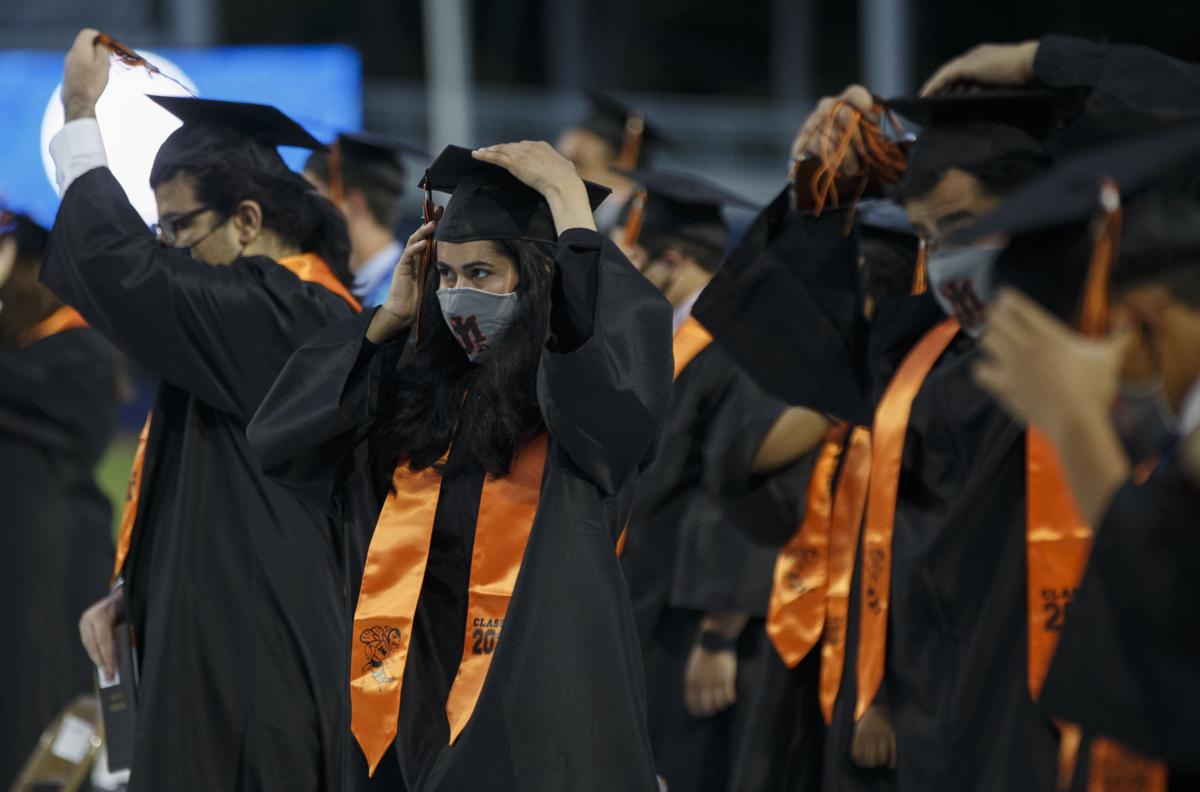 Beheshta Nassari and her fellow graduates turn their tassels during the James Monroe commencement ceremony.Nassari plans to take classes at Germanna to help achieve her career goal of becoming a dentist. 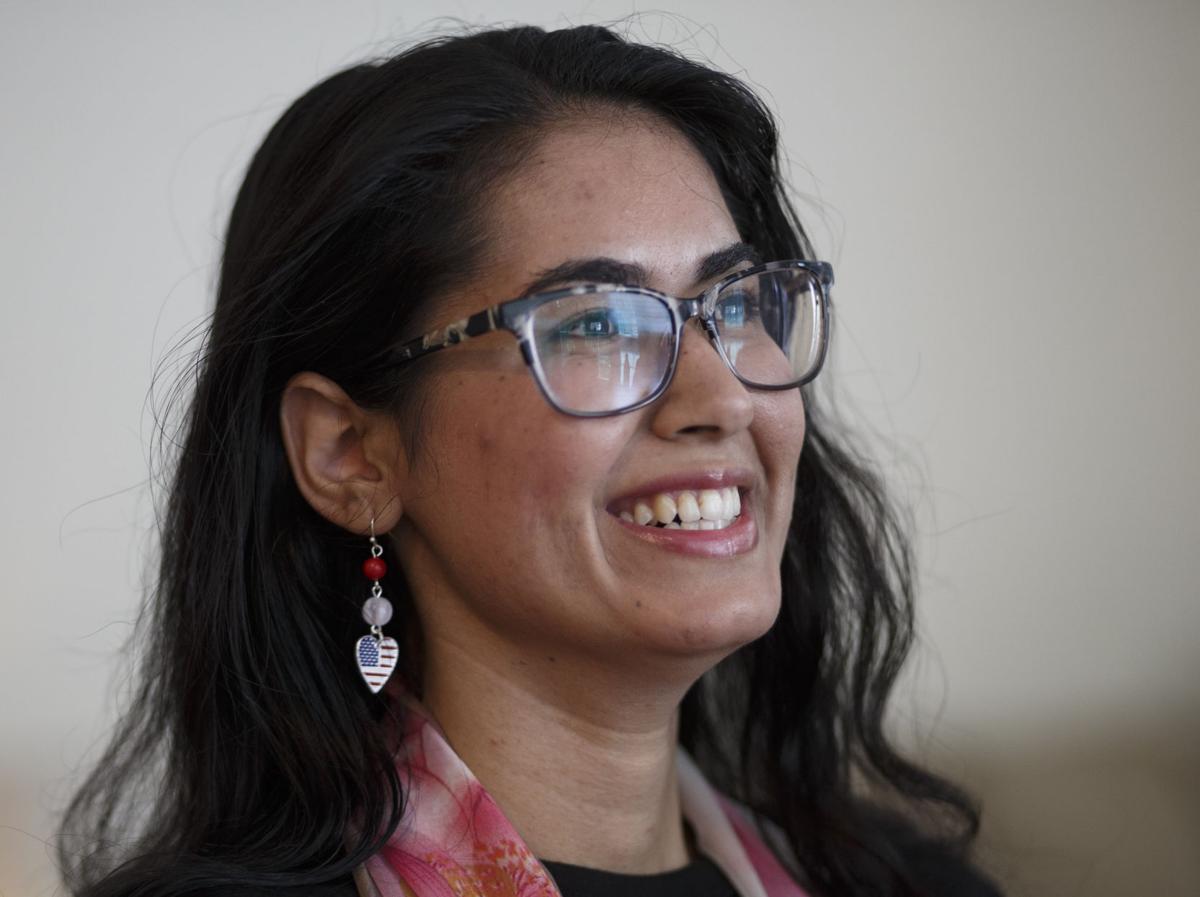 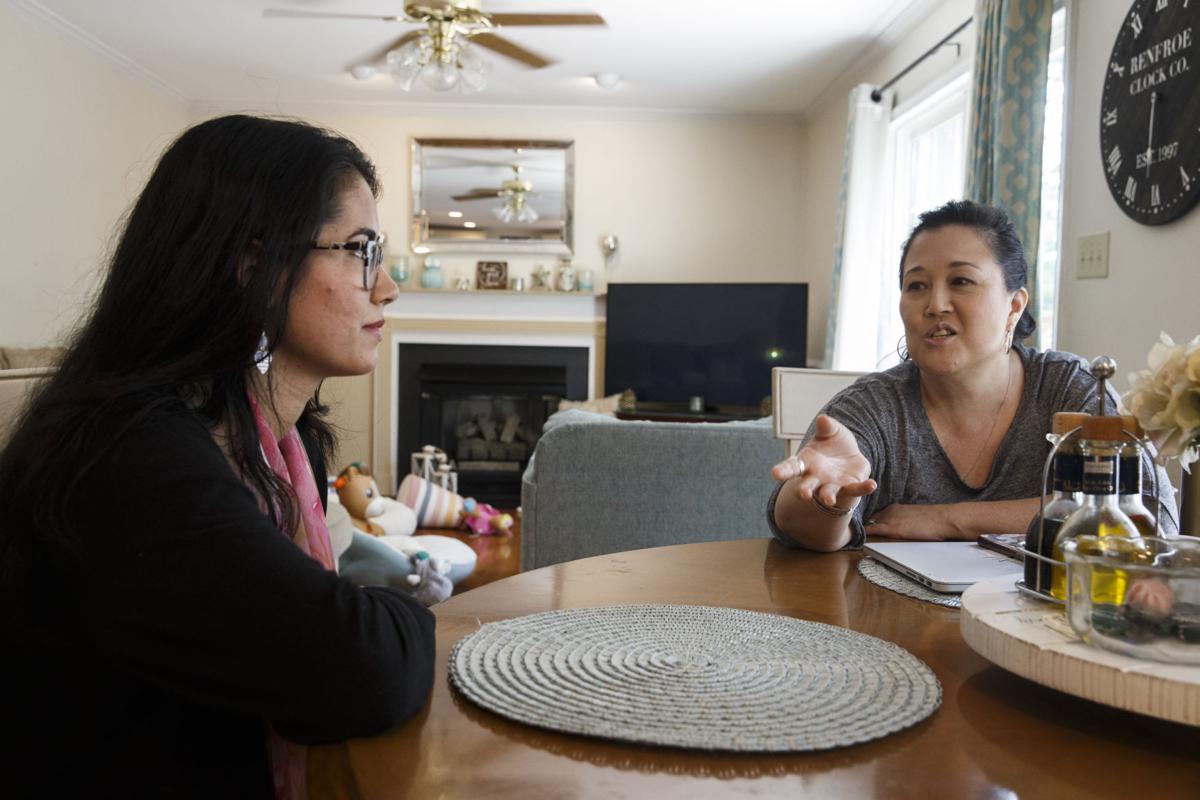 Beheshta Nassari chats with mentor Kathleen Renfroe, who helped her enroll at JM.

At first, the teenager from Afghanistan was so shy and withdrawn that she barely made eye contact with anyone outside her family.

As Beheshta Nassari learned a few words of English, she slowly found her voice and the courage to express her heart’s desire. Whenever her mentor, Kathleen Renfroe with Catholic Charities, came to visit, Nassari would tell her:

Renfroe got the message, but it wasn’t a simple matter of enrolling Nassari at James Monroe High School. She was 18 when her family came to the United States three years ago, after locals in her city of Jalalabad realized her father had worked as an interpreter for the military. Things got dicey—schools were attacked, pets killed and property vandalized—and it became clear that the Nassari family had to escape.

Beheshta Nassari knew the alphabet when her family arrived in Virginia, but couldn’t otherwise speak or write the language. She immediately took English classes and at one point even walked from her home in Mayfield to a church in downtown Fredericksburg for a more intensive course.

By early 2020, counselors at James Monroe told her and Renfroe she could enroll, but would not be able to stay in school past age 21, as is state law. That meant Nassari would have to double up on courses and complete her junior and senior requirements in just over a year.

And not any normal year, but in the middle of a pandemic.

“Throughout all of this, Beheshta has kept her head high and devoted almost all her free time to her classes”—to the point her mother feared she’d suffer from exhaustion, Renfroe said. “Beheshta had long waited to attend high school and was determined to make this opportunity count.”

Nassari graduated last week and has set her sights on becoming a dentist. She’d especially like to treat Afghan patients, especially women whose culture dictates they see only female physicians.

Even with a diploma in hand, the 21-year-old is still amazed by the opportunities she’s been given, considering she couldn’t even walk outside her Afghan home without her brother or father at her side. Asked what she’d like to share with readers, Nassari took a deep breath and proclaimed:

“This is my advice,” she said in a quiet but determined voice. “Never give up. If you want it, one day you will achieve.”

Others have noticed the motivation of the young woman with long black hair and earrings decorated with the colors of the American flags. She wears one pair or another featuring stars and stripes just about every day.

When members of the Horatio Alger Society, which is holding its annual convention in Fredericksburg this coming weekend, looked for a student to honor who embodied the self-reliance, perseverance and strength of character Alger wrote about, counselors nominated Nassari.

“From my interactions with Beheshta, she is a very respectful and kind individual,” said Tiffany McGillivray, counselor at James Monroe. “She holds true to her faith and values her family. She is diligent in her studies ... [and] I wholeheartedly believe she is a deserving student for this award.

Jack Bales, emeritus librarian at the University of Mary Washington, is hosting the Alger event. He contacted other society board members, who agreed that Nassari is the perfect choice for its “Strive and Succeed” award and scholarship of at least $500.

Bales read every single one of more than 100 books penned by the author in the mid-19th century. The belief that hard work leads to success struck a chord with him and his eight brothers and sisters, who all had jobs in high school and worked their way through college.

As he’s learned the background of this year’s award winner, Bales has come to believe that Nassari’s story rivals any of the obstacles faced by characters in Alger’s books.

Nassari had asked Renfroe to join her during a recent interview because she’s still nervous about her English. As the two sat at Renfroe’s kitchen table, Nassari talked about the extreme restrictions she faced as a female in Afghanistan.

Her parents, Mohammad Hashim and Hadesa Nassari, always encouraged their seven daughters to go to school, just as they did their three sons. But their attitude was not the norm in a country where girls faced arranged marriages at age 15 or 16 and had little contact with the outside world.

Just sitting at the table with a male photographer—as she did during the interview—would have been grounds for death if her father or brother wasn’t present, she said.

Nassari wanted no part of being practically a prisoner in her own home or a wedding at an early age.

“I still say knowledge is my marriage,” she said.

As she and her family have gotten used to American culture, Renfroe noticed how the girls, especially, have come out of their shells. Initially, the sisters catered to their teenage brother, Sebghat, who also graduated last week from James Monroe.

They did his laundry and waited on him when he came home from classes or track practice. But as time went on, Renfroe noticed the girls discovering the joys of independence—and equality.

“One day he came home and wanted water, and Beheshta said, ‘You have legs, go get it yourself.’ ”

Nassari smiled at the thought that she, a young woman from Afghanistan, could drive a car, work in a Walmart and attend Germanna Community College as part of her coursework to becoming a dentist.

“You can do anything you want in this country,” she said.

The Horatio Alger Society is celebrating its 60th anniversary with an annual convention, held through Sunday at the Hampton Inn and Suites in Spotsylvania County. Called “Frank and Fearless in Fredericksburg,” the convention marks the first time the event has been held in the local area.

The group began as an organization of Alger book collectors, but over time, members’ interests have broadened to include all juvenile literature, including boys’ and girls’ series books, pulp magazines and dime novels. Members also conduct research on Alger’s life, works and his influence, said Jack Bales, who’s hosting this year’s convention.

The schedule includes presentations about the 19th century author whose books usually featured poor boys who sold newspapers, shined shoes or worked in stores to support themselves or their families. There’s also time for socializing with fellow members, tours of local historical sites and a banquet honoring its “Strive and Succeed” award winner, Beheshta Nassari of James Monroe High School.

The annual Horatio Alger Society book sale, held from 9-10 a.m. Saturday at the Hampton Inn’s hospitality room, is open to the public.

Beheshta Nassari and her fellow graduates turn their tassels during the James Monroe commencement ceremony.Nassari plans to take classes at Germanna to help achieve her career goal of becoming a dentist.

Beheshta Nassari chats with mentor Kathleen Renfroe, who helped her enroll at JM.