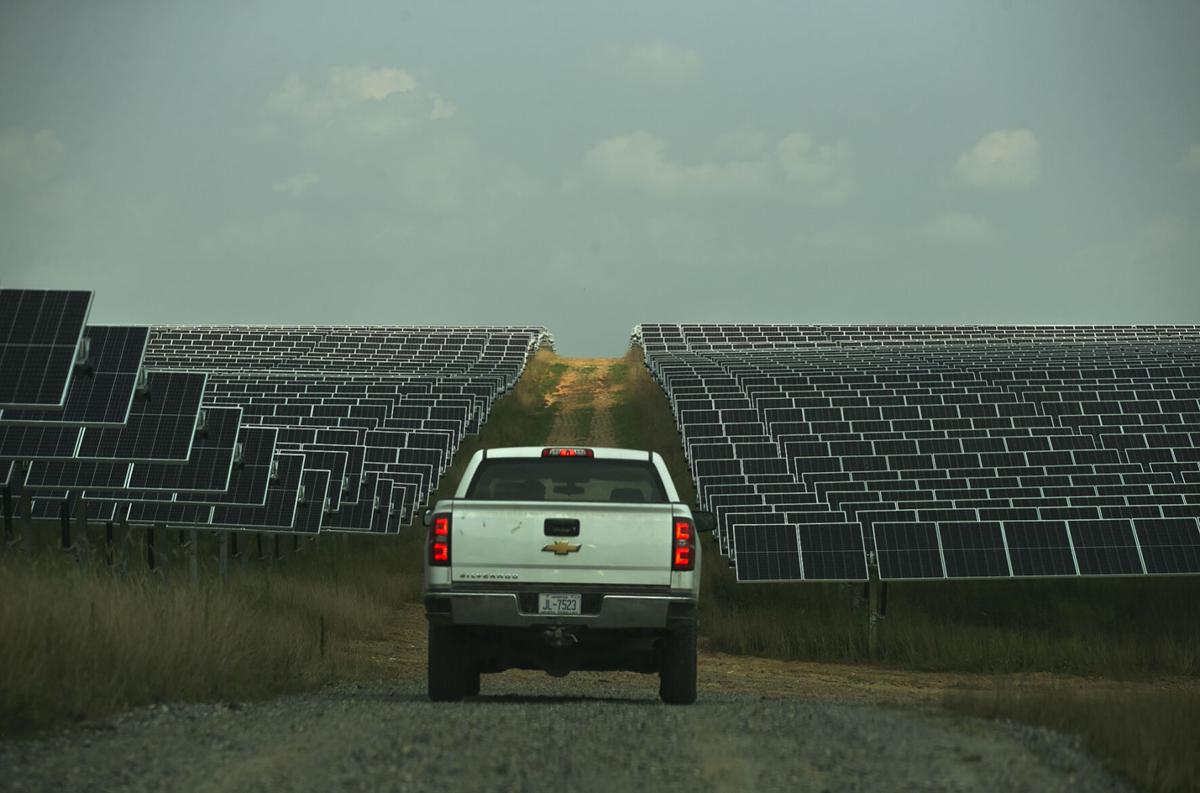 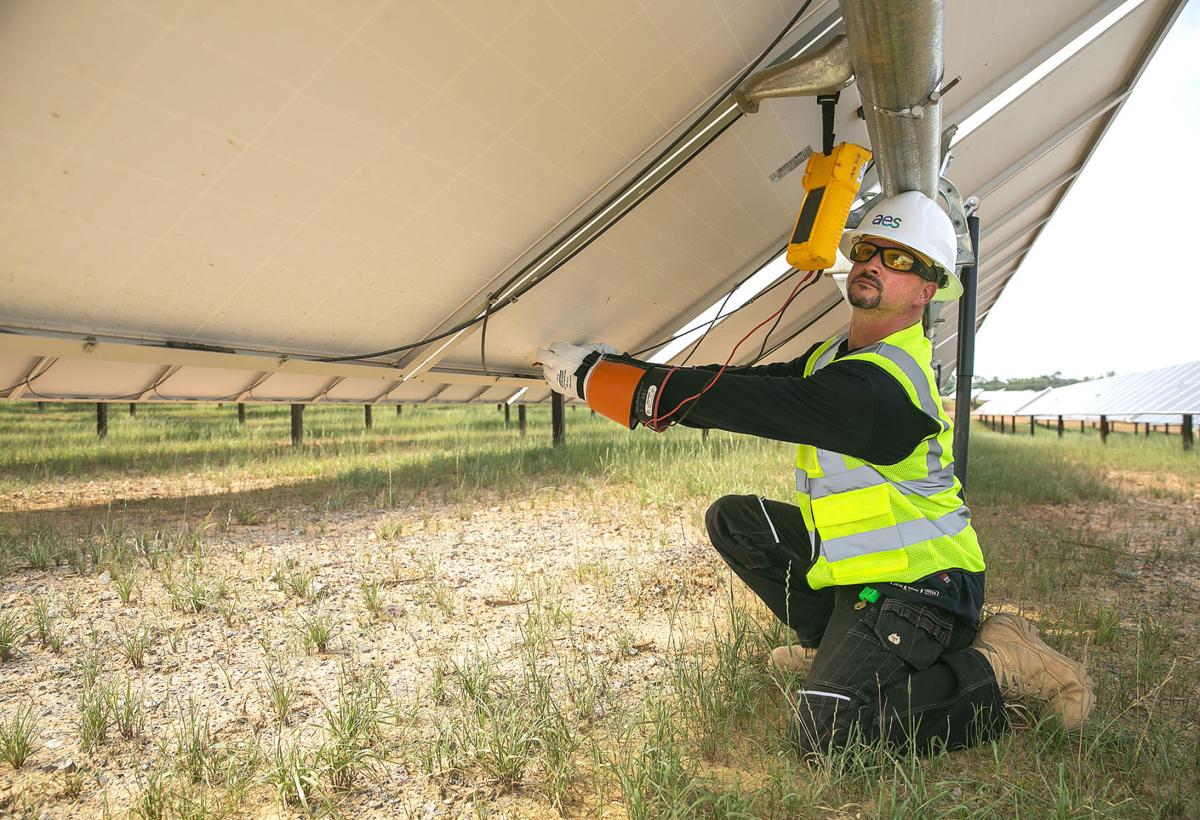 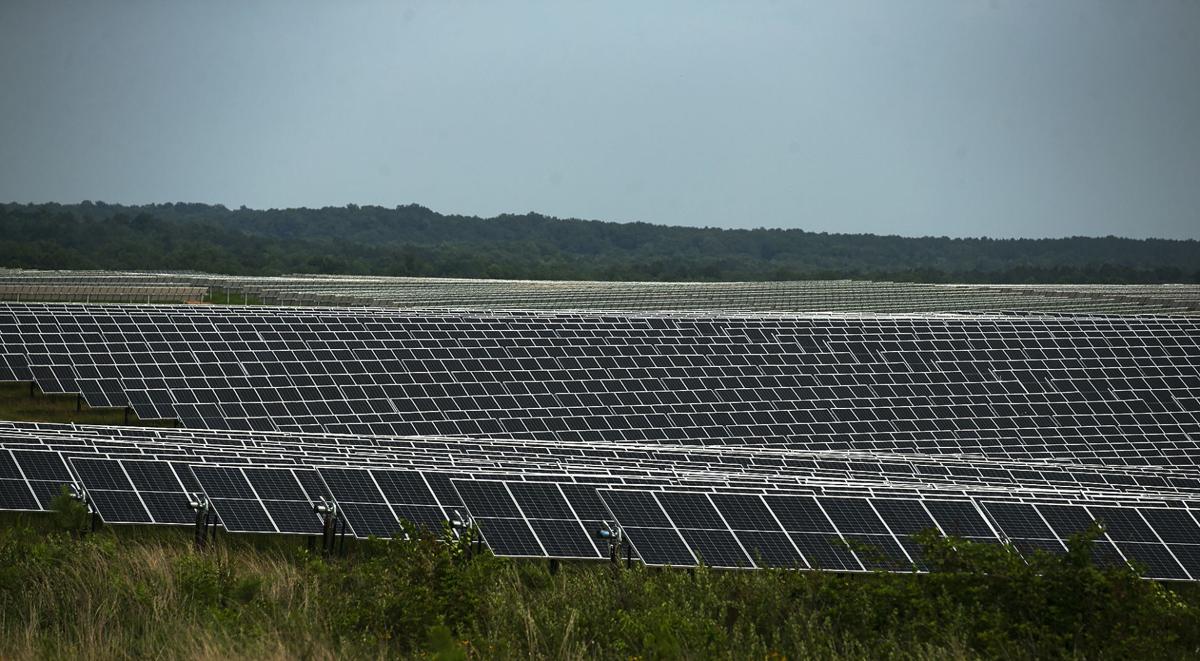 On a recent afternoon, white clouds drifted in the blue sky over a massive plot of rural

land in western Spotsylvania County. Sunlight streamed down on 6,350 acres of creeks, ponds, trees and fields of beige knee-high grass.

And something else was gleaming under those rays: row after row of solar panels.

The property also has a dirt road network, with stop signs and a pair of mobile stoplights for a one-way bridge.

Eventually, just more than 1.5 million solar panels will cover about 3,500 acres of the property. About half of the panels have been installed and are generating electricity.

In various areas, rows of solar panels stretch into the distance, morphing into a shimmering sea of black and white, topped on the horizon by a sliver of green treeline.

The Spotsylvania Solar Center drew a flood of opposition in 2018 and 2019, when Utah-based Sustainable Power Group, or sPower, sought rezoning and special-use permits to build a 500 megawatt solar facility. The county approved the facility in April 2019.

Now, the solar plant is more than half completed and already sends electricity into the grid.

The first phases are generating 259 megawatts each day, providing power for some of the companies that bought the rights to the energy. Apple, Microsoft and the University of Richmond contracted to receive the electricity credits from the Spotsylvania facility.

The remaining portion of the solar facility should be online by the fall, according to Helen Humphries, spokeswoman for AES Corp., which merged with sPower in November, incorporating the company into the AES clean energy development department.

AES was ranked the seventh largest solar company in the world in December, according to a Yahoo report.

When complete, the Spotsylvania facility will have about 1.8 million solar panels feeding 484 megawatts into the grid, making it one of the largest such solar plants in the U.S. All of the other major solar plants are west of the Rockies.

The largest U.S solar facility is the Nevada-based Copper Mountain Solar site, which produces 794 megawatts a day. The biggest solar facility in the world is the Bhadla Solar Park in India, which covers 14,000 acres and distributes 2.25 gigawatts of energy per day.

Those solar centers dwarf the local facility, but none of those behemoth sites have been built in a location like Spotsylvania’s, which is rural, yet populated.

Residents who live around the solar farm were well organized and vocal during the approval process and during construction, when they found issues with buffers from nearby residential properties, but no major problems.

There hasn’t been much talk in the past year, though.

Sean Fogerty, one of the leaders of an opposition group of residents who lives in Fawn Lake, said the group no longer exists. But he and others have kept eyes on the work, and even hired out to have a drone shoot overhead video of part of the site.

The images from the sky are eye-opening.

“It’s crazy” to see all of the solar panels, Fogerty said. “It was hard to convince people what it would look like.”

Fogerty said most of the impacts from the facility affect property owners outside of the neighborhood—although he noted one neighbor moved from a home bordering the solar facility to another home in Fawn Lake.

“I can’t imagine living right on top of it,” Fogerty said.

He and others helped residents along Chancellor Meadows Lane when there were violations of the agreed-to buffers. AES eventually bought the property of one resident on the street, Michael O’Bier, after he continuously pushed back against the work encroaching on his land.

Fogerty figures only time will tell whether there is any validity to other opponent concerns—impact on home values, future decommissioning of the site and a “heat island” effect, a theory that such solar facilities increase heat nearby.

A facility of the Spotsylvania solar site’s magnitude “has never been built in this kind of area,” Fogerty said. “This is a huge test case.”

Another injection of Arctic air ushered in a midweek cool-down in the Fredericksburg area.