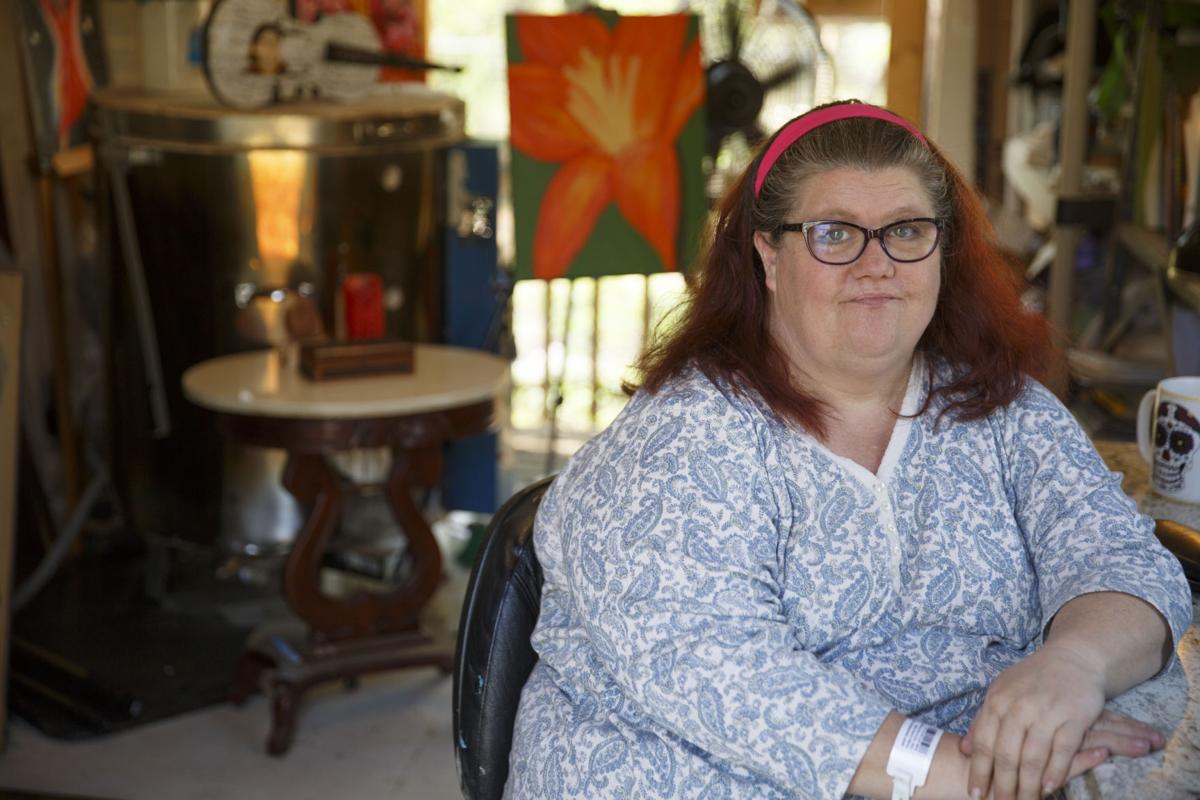 Tammy Hedge was working in her backyard art studio in Fredericksburg when she was bitten by a feral cat that later tested positive for rabies. Hedge is worried that other feral cats in her Hillcrest neighborhood may now be carriers, too. 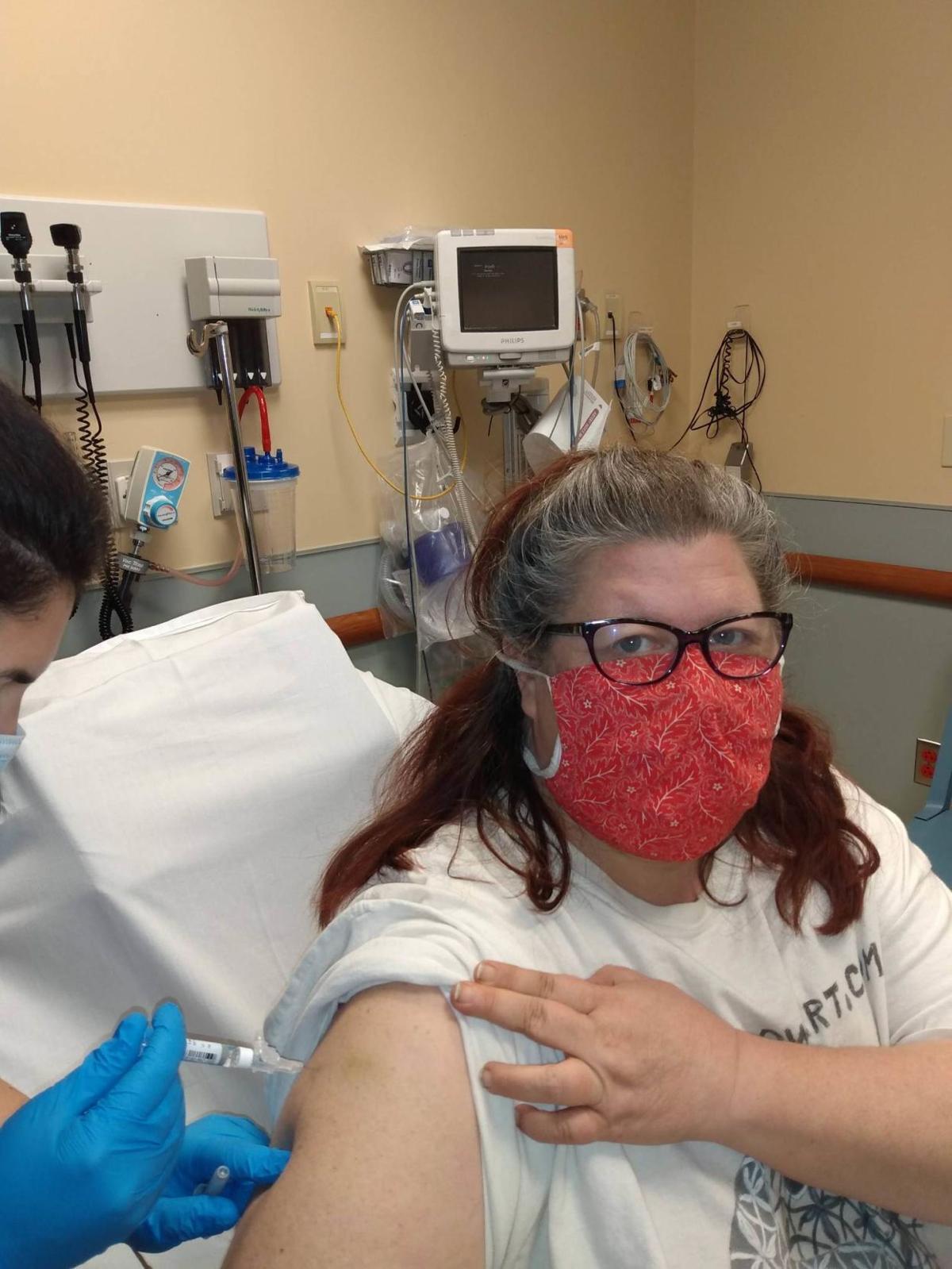 Tammy Hedge of Fredericksburg gets rabies shots after being attacked by a feral cat in her backyard. The cat was later found to have rabies. 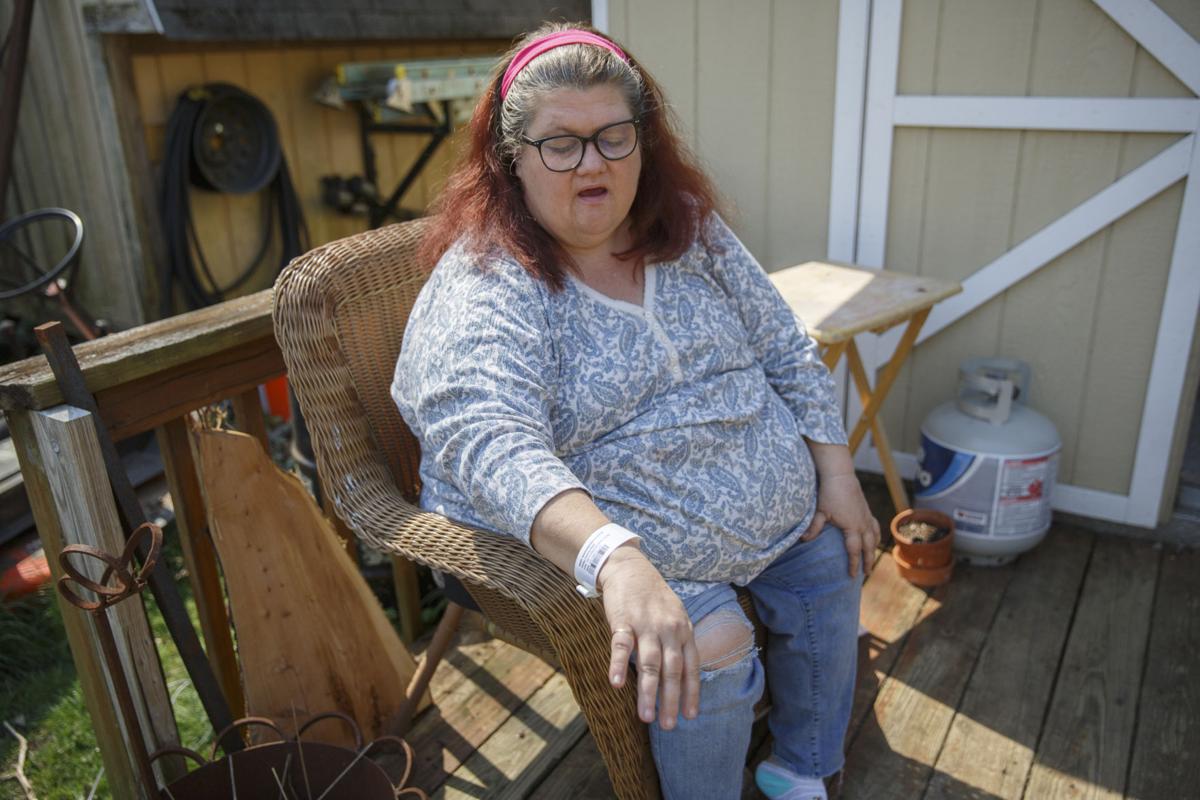 Tammy Hedge shows where she was bitten and scratched by a feral cat in her backyard art studio in Fredericksburg, Va. when she was bitten by a feral cat. Officials have confirmed the animal had rabies and Hedge is concerned about other feral cats in the neighborhood being potentially exposed.

As Tammy Hedge deals with the aftermath of being attacked in her own backyard by a rabid cat, she’s grateful it happened to her and not a more vulnerable resident of her Fredericksburg neighborhood.

“There are a lot of young children and a lot of elderly people who could really, really have issues with something like this,” she said. “At least I have the resources, the insurance, I have the big mouth and the connections to make a fuss about it.”

Hedge hadn’t planned to become a “rabies ambassador,” but said she was forced into the role after she was bitten by a feral cat that had been hanging around her home since winter. She lives near Paul’s Bakery in the Hillcrest area, on Longstreet Avenue off Lafayette Boulevard.

Each morning, the 51-year-old mother of four goes out to her backyard “she-shed,” a studio where she creates sculptures called Hedgerow Art. On March 31, one of three cats she sees regularly—animals which normally avoid human contact—walked up “bold as brass” onto the deck of her studio, meowing. She saw a wound on its head and thought it was hurt.

“I leaned over to get a closer look, and it frickin’ attacked me,” she said. “It had its claws and teeth in my hand. I shook it off, and I was backing up in my studio to find something because it was still coming at me.”

The only thing she could reach was an empty box, so she swung, and the cat turned to leave. As Hedge headed inside to tend to her bleeding hand, she saw the cat following her.

Once inside, she immediately called Animal Control. In the city, such incidents are handled by the Spotsylvania Sheriff’s Office, and an Animal Control officer responded and put out a trap.

Hedge also called her doctor, who told her to hightail it to the emergency room. She was there when an officer texted her a photo of a white cat with gray spots, which had been trapped. It was the one that bit her.

In the week since, Hedge has reached out to city and health officials, wondering what agency has responsibility in such cases. She’d like for the other two cats to be observed to see if they also have rabies.

Hedge said everyone she’s dealt with has been extremely nice—and concerned—but no one has stepped forward to do anything. She said each has said it’s another agency’s responsibility.

A worker at a local animal shelter told Hedge she could purchase humane traps, catch the cats and bring them to the facility—then pay to have them vaccinated and neutered. However, she was told the facility doesn’t have space to observe animals under quarantine.

“I don’t want every stray cat in town rounded up and killed, I’m not like that,” she said. “But it seems there should be some kind of emergency protocol in times like this—at least round them up and check them and make sure they’re vaccinated. What happens if a cat from this colony gets involved with another and [rabies] starts spreading because nobody wants to take responsibility for it?”

The only people in the neighborhood who knew a rabid cat was in the area were those informed by Hedge and her family. The Rappahannock Area Health District issued a press release on Tuesday, almost a week after the incident and four days after notifying Hedge the cat had tested positive for rabies.

Typically, “that should be the same time our office is notified,” said Maj. Troy Skebo of the Spotsylvania Sheriff’s Office. But he said Animal Control officers hadn’t heard about the positive results until Wednesday morning.

“Once a positive test comes back, the health department takes the lead, and we assist them in any way, if that means we hand out fliers or we go trap cats,” Skebo said. “With us just finding out, the plan of action is being worked on as we speak.”

The local health department will not be involved “in containing the other animals in the feral colony,” said spokesperson Allison Balmes-John. She said her agency’s role was to work with the human victim on the course of action, test the cat for rabies and raise awareness of the issue and ways to prevent rabies.

Meanwhile, Hedge is getting the various shots she needs to combat a rabies infection. She said the first series was the worst, not necessarily because of the pain that’s rumored to be so awful, but because of the sheer volume of needle sticks.

The same day she was bitten, she had seven shots. Three went directly into the bite marks, and one went into each arm and leg. She got a booster shot to prevent tetanus, an injection of a fast-acting immune globulin into the wounds to prevent the virus from taking hold, and vaccines to help her body identify rabies—and fight against it.

She had another single shot on Saturday and Wednesday and will get her final shot next week.

Hedge faces another complication as she battles two infectious diseases. She’s due for her second COVID-19 vaccine next week and has asked several health officials if she should postpone it. Medical officials advise not giving the COVID-19 vaccine within two weeks of other shots to prevent the flu, pneumonia or shingles.

But there doesn’t seem to be any guidance available regarding rabies shots.

She even called the Pfizer hotline and talked to three people who all were helpful and friendly, but as she experienced with local authorities, no one could give her an answer about what to do.

Rabies is a deadly disease caused by a virus that attacks the nervous system. It’s preventable in animals through vaccines, but fatal to animals and humans if left untreated.

Exposure to human comes any time there’s a bite, scratch or other circumstance when saliva or central nervous system tissue from a rabid animal enters an open, fresh wound or comes in contact with a mucous membrane by entering the eye, mouth or nose, according to the Rappahannock Area Health District.

It advises that residents avoid contact with wild animals and domestic animals you do not know; report unusual acting animals; vaccinate dogs, cats and ferrets; and call the doctor and local health department if you are exposed or your veterinarian if your pet is exposed.

Also, the local health district says people should not put food out for stray or feral animals because this will put domestic and wild animals in close contact where rabies transmission can occur.

Tammy Hedge was working in her backyard art studio in Fredericksburg when she was bitten by a feral cat that later tested positive for rabies. Hedge is worried that other feral cats in her Hillcrest neighborhood may now be carriers, too.

Tammy Hedge of Fredericksburg gets rabies shots after being attacked by a feral cat in her backyard. The cat was later found to have rabies.

Tammy Hedge shows where she was bitten and scratched by a feral cat in her backyard art studio in Fredericksburg, Va. when she was bitten by a feral cat. Officials have confirmed the animal had rabies and Hedge is concerned about other feral cats in the neighborhood being potentially exposed.