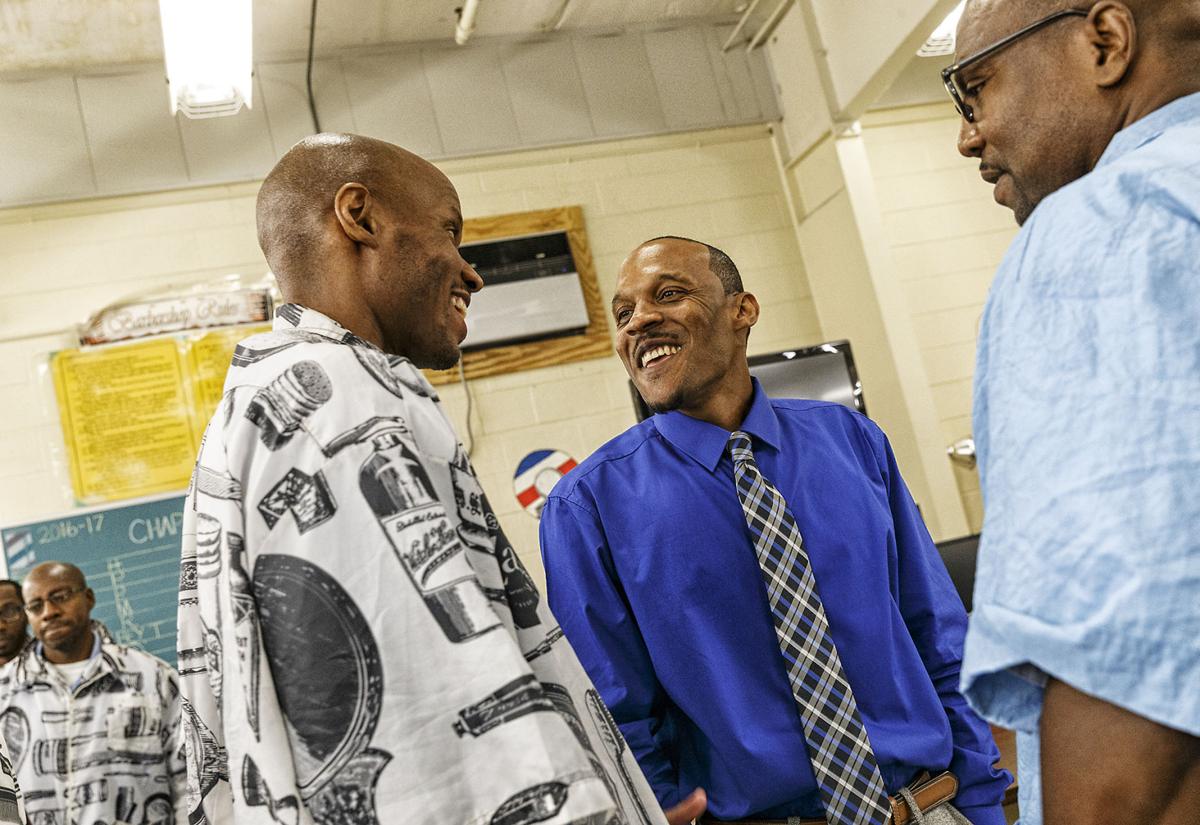 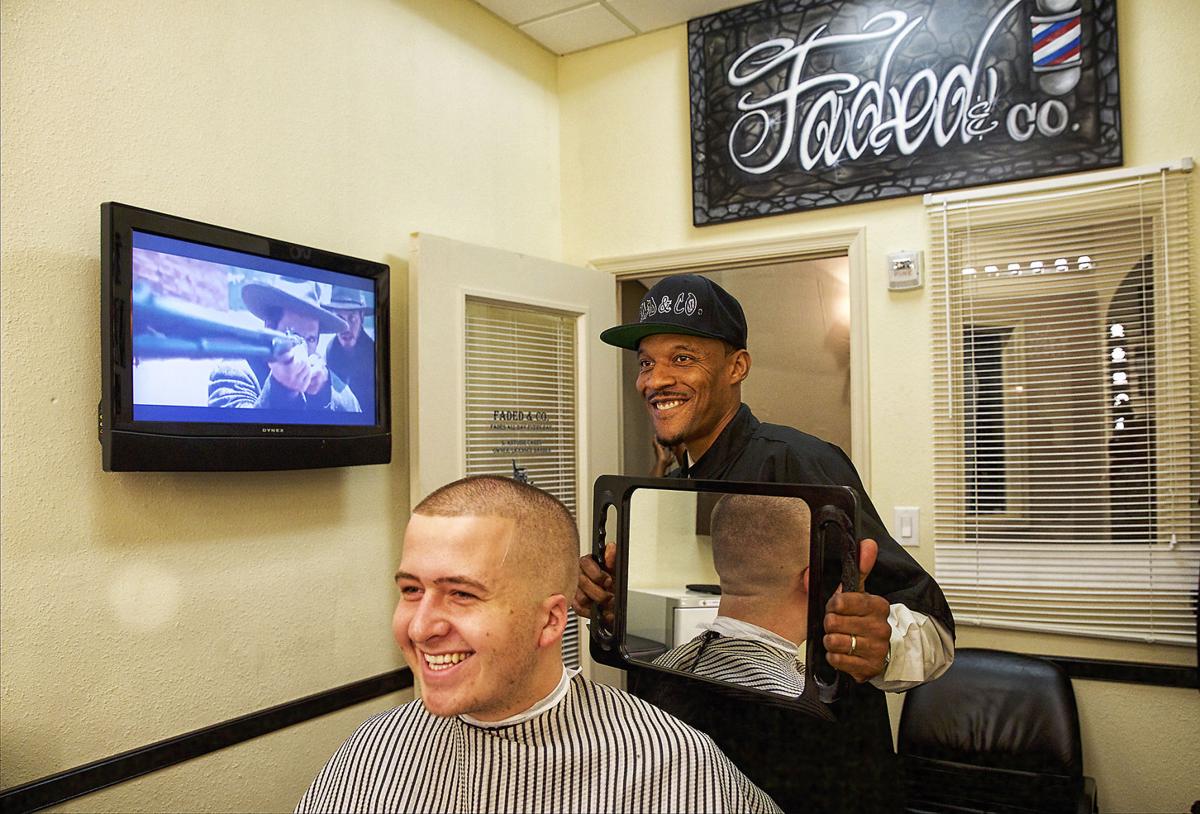 Antoine Carey gives Chad Derr a cut at his shop, Faded and Company, at Phenix Salon Suites in Central Park. 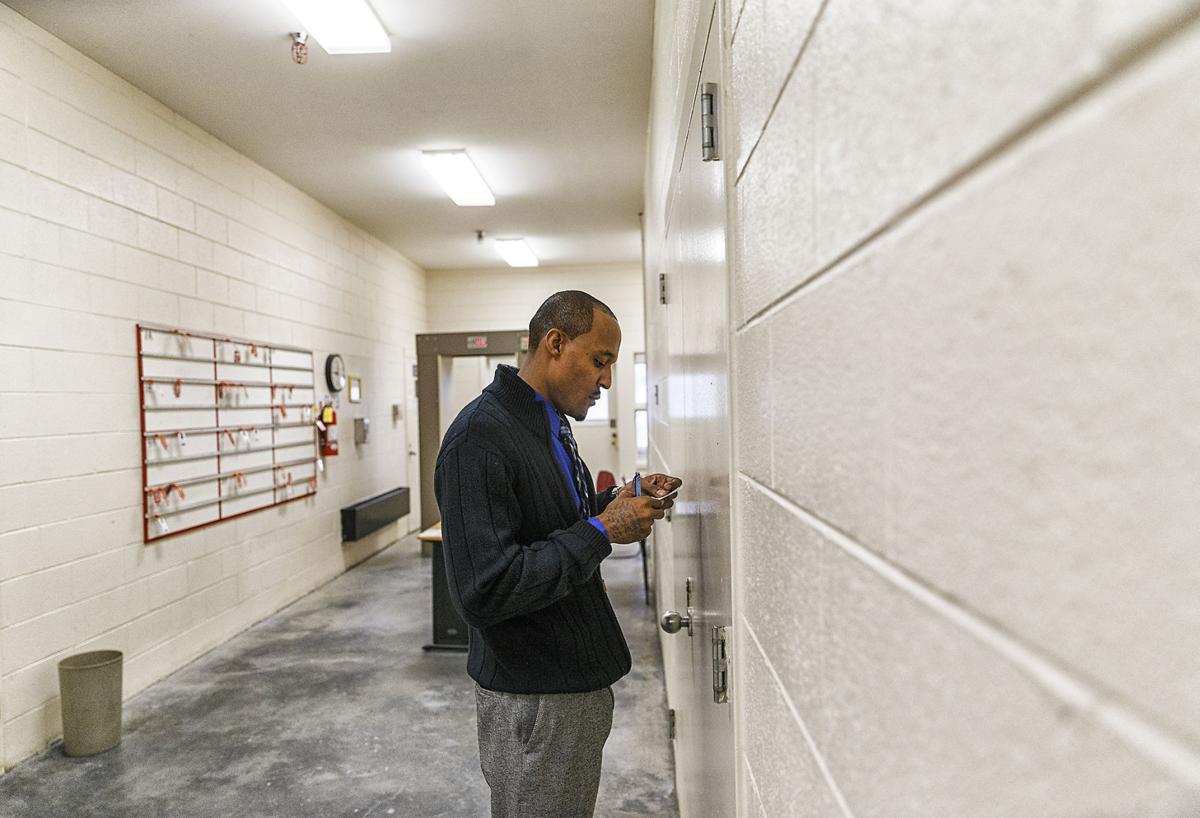 Antoine Carey nervously jots some last-minute notes on Tuesday in the hallway near the barber room at Haynesville Correctional Center. He was released in February of 2014, with a barber’s license. 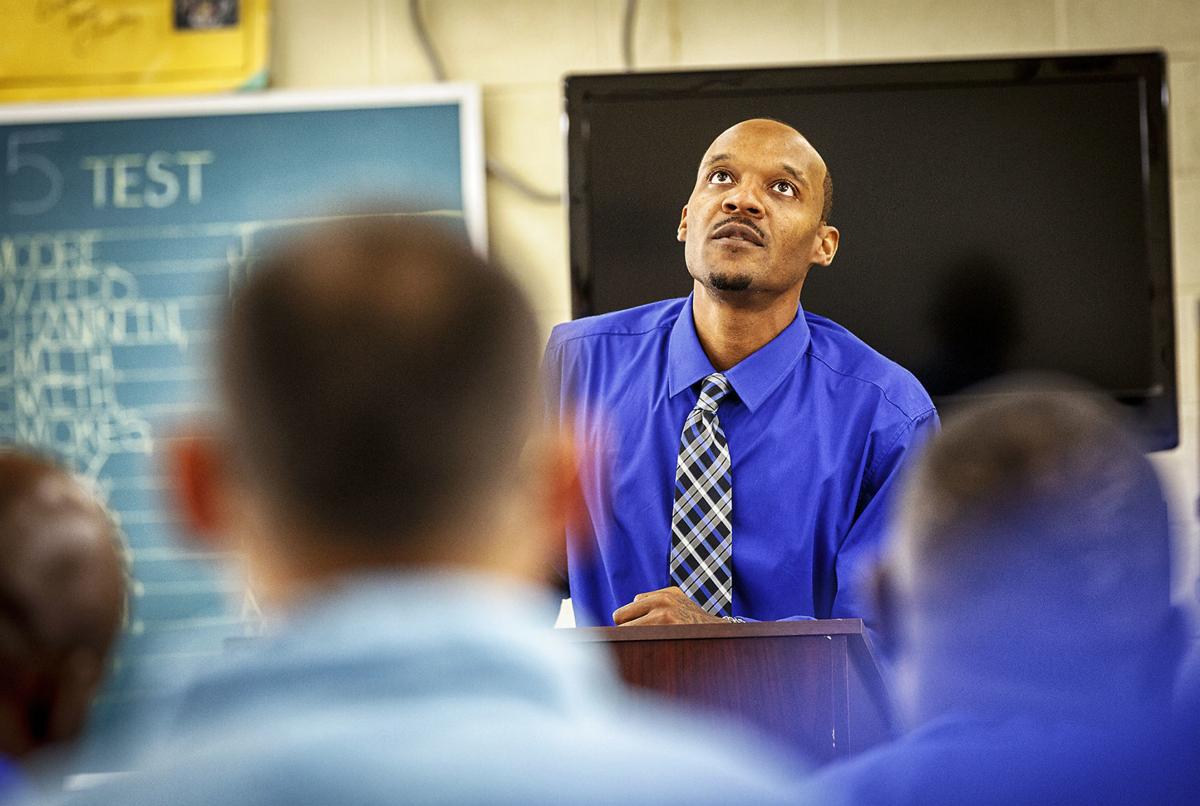 Carey gazes at the barber’s licenses on the back wall of the classroom as he speaks to current inmates.

Antoine Carey typed the Haynesville address into his GPS as the sun came up.

He could recite 421 Barnfield Road by heart. But he couldn’t tell you how to get to the place he’d called home for three of the last five years.

A Virginia Department of Corrections van had twice delivered Carey there. When family drove him away on Feb. 24, 2014, he hadn’t planned to come back.

He’d left with little more than a felony record and a barber’s license on which the Haynesville Correctional Center address was printed. That was the place he’d learned the craft from nothing. That was the thing that was going to help save him this time.

Carey was returning to Haynesville as a success story. He’d dressed the part: dress pants and a blue button-up shirt and tie.

But at 33, he knew as well as anyone that success is not all straight and narrow. That when you’re on top, that’s when you can fall the hardest.

Carey told only a handful of people his plans for the day, but soon, everyone would know. If he messed up again, “all those that had this hope—that hope potentially dies,” he thought.

He headed toward the direction the sun was rising, the light obscured by a heavy morning rain.

Inside, he was known as College Boy. That was because while many of his fellow inmates were just now working toward their GED, Carey had graduated from high school and gone to college.

Carey was a senior at Norfolk State University majoring in business and marketing when he was arrested on a felony drug and firearm charge in 2005.

By the time he’d arrived in Norfolk, he’d spent most of his life in a small town in Essex County. He had dabbled in alcohol and marijuana in high school, he said. But city life offered something more dangerous.

“What I was drawn to was people in the street,” Carey said. “I was introduced to cocaine. I started selling crack, started buying guns.”

He spent 15 months in jail. When he came home, he met his firstborn, a daughter, for the first time.

“I’m no longer taking classes. I’ve got a felony record. Naturally, I dug myself even deeper,” he said.

By August 2008, Carey was in trouble again. The convictions stacked up. Another drug charge. Attempted unlawful wounding. Possession of a firearm by a nonviolent felon.

, according to VDOC records.

He arrived at Haynesville Correctional in June 2010 and stayed for a month before being transferred to another state prison; he would return to Haynesville the following March to serve out the rest of his sentence.

“I always held onto the hope this is not where I was supposed to be,” Carey said.

He looked for opportunities to fill his time.

“Contrary to what most people believe, there’s not a lot you have access to outside of your GED in prison.”

But in a squat building on the far side of the grounds of Haynesville Correctional Center, past dormitories and a garden planted and tended by inmates, was a place where Carey might learn masonry or barbering. He’d never so much as picked up a pair of shears until he walked into a room encircled by more than a dozen barber chairs and filled with textbooks and technical diagrams and a wall filled with barber licenses.

Up front stood Robert Fauntleroy, the legendary instructor who 23 years ago started a program that required putting things like mirrors and shears into the hands of state prisoners—all in the belief that a profession on the outside would make them less likely to wind up back in.

He was right. Two decades of research on recidivism—a relapse into criminal behavior—showed that whether rehabilitated or not, if former offenders couldn’t find work, they were more likely to return to the illegal activities that got them in trouble in the first place, according to the Council on Virginia’s Future.

The barbering program was more successful than perhaps even Fauntleroy himself could have imagined. In 23 years, 650 inmates have tested for their state barber’s license. Six hundred and fifty have passed. A handful had gone on to get their instructor’s license.

At Haynesville, some needled Fauntleroy for months or years for a chance to enter the 12- to 14-month course, which stressed hygiene and professionalism above all else.

Carey was less enthusiastic. “I didn’t have any desire to really be a barber. It was just a shot that I took.”

Now he was back as what the Department of Corrections called a returning citizen.

Debbie Howard, an offender workforce development specialist, had for the first time invited Carey along with three other Haynesville barbering program graduates to speak to a roomful of inmates on what was possible on the outside.

“My motto,” Howard liked to say, “is ‘change your mind, change your world.’ ”

She believed Carey and the others—Michael Turpin, Marcious Cousins and Jessie Morris—had done just that. All were employed as barbers. All were staying out of trouble.

Fauntleroy’s program had been partly responsible for that. Howard also credited the so-called cognitive community in which they’d all participated. Designed for those within a year of release, it taught things such as anger management, social skills, problem solving, parenting and workforce readiness.

It taught Carey to constantly evaluate himself, to make peace with the person he was and remember who he wanted to be, and this is what he was doing as he walked through the rain and into the drab lobby of Haynesville Correctional Center.

He’d felt honored to be invited; a sense of obligation had outweighed any hesitation. But now he was here and everything he’d gone through came back: the loss of his freedom, the birth of his son in his absence, the break-up with the woman he’d loved and all the tears that came with it. He found himself putting his hands against the wall when he passed through security—a stance required for prisoners but not the guest he now was, and the guards chuckled a little and so did he.

Then he was out on the sidewalk on the grounds of the prison, sighing heavily and looking around, waiting for the rest of the group to join him.

He would not visibly relax until he was inside the barber school, the only one of the four returning citizens who referred to handwritten notes when he stood to speak.

“The program has shown you can get success from a mistake in life. I’m filled with joy and happiness this morning,” Fauntleroy said, and all around there was a sense of that.

Carey told how he’d quickly found employment in Fredericksburg and how, after working for someone else for eight months, had gone into business for himself. He now operates Faded and Company in rented space at Phenix Salon Suites in Central Park, buying equipment on Craigslist and networking on social media sites and keeping up-to-date on the latest fashions through YouTube.

“There ain’t nothing special about me. I wore the same uniform as you,” he said.

And yet here he stood, an example of all that was possible.

Dave Ellis contributed to this story.

Under his long-sleeved, button-up shirts, Antoine Carey is covered in tattoos from his neck to his hands.

Antoine Carey gives Chad Derr a cut at his shop, Faded and Company, at Phenix Salon Suites in Central Park.

Antoine Carey nervously jots some last-minute notes on Tuesday in the hallway near the barber room at Haynesville Correctional Center. He was released in February of 2014, with a barber’s license.

Carey gazes at the barber’s licenses on the back wall of the classroom as he speaks to current inmates.